The museums might be shut and the galleries closed, but art lovers still have good reason to take the streets of The Big Apple tomorrow. Since 2005, a contemporary arts character has been finding their way into the inflatbles bobbing above Macy's Thanksgiving Day Parade. Keith Haring's Figure with Heart, Kaikai and Kiki by Takashi Murakami, a Jeff Koons rabbit, and an upside-down humpty dumpty by Tom Otterness have all floated along in what the organisers call their Blue Sky Gallery.

This year they've commissioned the local graffiti artist turned pop sculptor and painter Brian Donnelly, better known as KAWS, to bring his shy clown character Companion to the parade. As The New York Times reported back in May, Donnelly was approached by the event organisers two years ago.  "I grew up in Jersey City, watching the parade on TV," Donnelly told the paper. "It was more important than the holiday itself. To have my character in a lineup with Snoopy and Kermit is a real dream." 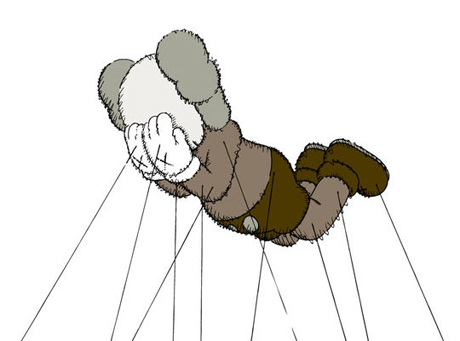 An early rendering of the inflatable KAWS companion

Donnelly produced a rendering of his well-loved character, which the organisers then passed on to a South Dakota company who made the balloon. It was tested in secret back in August, and makes its public debut tomorrow. The Wall St Journal reports that, at 4,500 cubic feet, it is only a medium-sized parade inflatable. Nevertheless, the balloon does break new ground in one respect. As the WSJ reports, Macy's lead designer, John Piper believes "it's the first time we've had a character that's shy." Let's hope Companion can handle tomorrow's crowds. Enjoy the parade if you're going.

More on See KAWS' Companion at the Thanksgiving Parade