The phantasmagorical world of Vasily Klyukin

The 39-year-old Billionaire banker, real-estate developer, philanthropist and science-fiction novelist, Vasily Klyukin, is a man keen to share his talents with the world. As the Russian-born Monaco resident told Forbes magazine earlier this year “one day I decided I needed to live every day as my last day. It is the only way to devalue money in your brain.”

To that end, he has been designing some highly unusual buildings. While his creations may lack planning approval, and, in one or two cases, a clear purpose, they remain some of the wildest designs ever committed to a CAD file. Has Klyukin created the architectural equivalent of Outsider Art? Read on and judge for yourself. 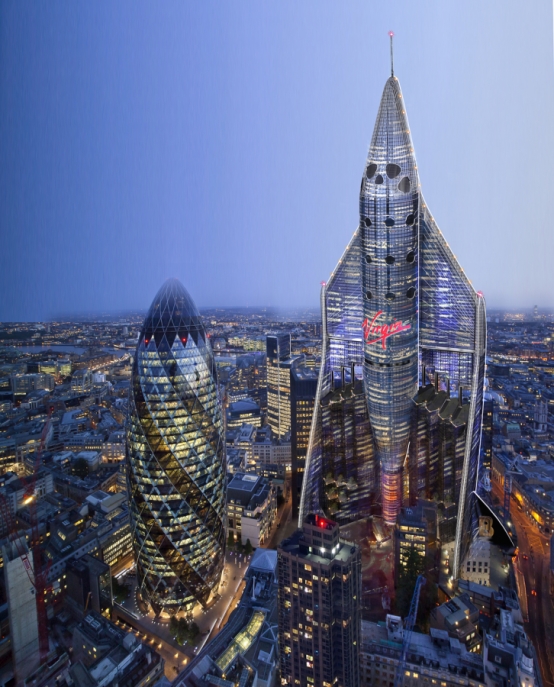 Asian Cobra Tower (main photo) “In Japan, telling someone that he is a snake means a compliment. In China snakes and dragons often mean the same,” says Klyukin. “The symbol of wisdom and eternal life, this tower would embellish any Eastern city.” The Asian Cobra Tower boasts a nightclub on its uppermost floor and the capacity to change colour.

Sexy Tower NYC “This concept is very extravagant, even for the modern World,” the architect explains, referring to this sculptural addition to lower Manhattan’s skyline. “Someone will be shocked by this idea, someone will find it beautiful and sexy, someone - vulgar, but everybody, without an exception, would want to observe such a tower or visit it at least once in a lifetime.” He adds: “I personally would like to live in this tower.” 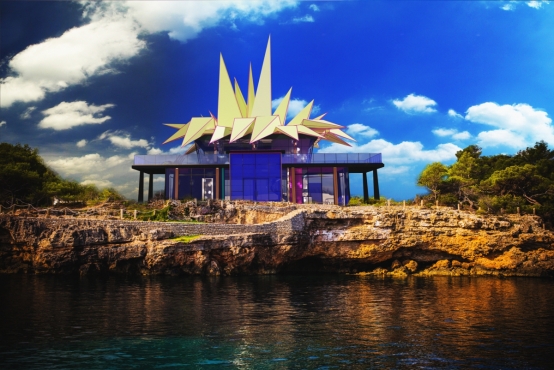 Andy Warhol’s Villa  “It's impossible not to recognize this hairstyle,” writes the architect in relation to this design, inspired by the late pop artist’s spiky hair. “The villa itself, besides the roof, does not differ from the majority of modern buildings." 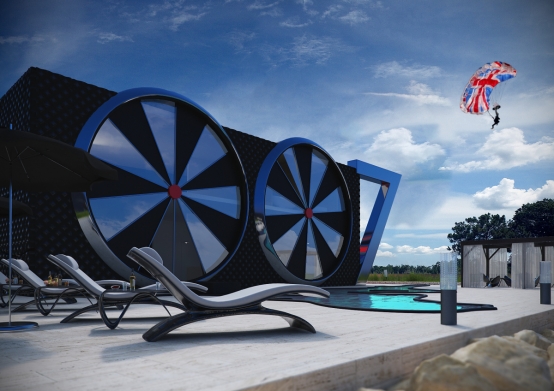 Top Secret Agent Villa Klyukin channels the glamour of the Bond movies in this creation, a 007-themed retreat for a well-heeled superspy. “The real surroundings of this house are not known to me,” he explains. “That is why I modeled what could be the best fit for it - the quiet and secluded place away from the prying eyes.” 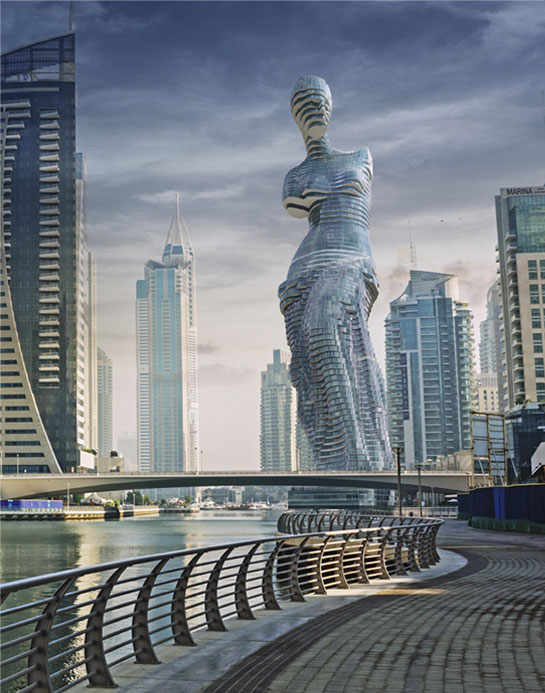 Venus Classical  Elegance meets contemporary architecture in this unusual skyscraper. Klyukin does not provide a great deal of detail, but does capture the spirit of the structure: “In our life, another beautiful woman can appear. She will meet you on evenings and accompany you to work on mornings and won’t arouse jealousy.” 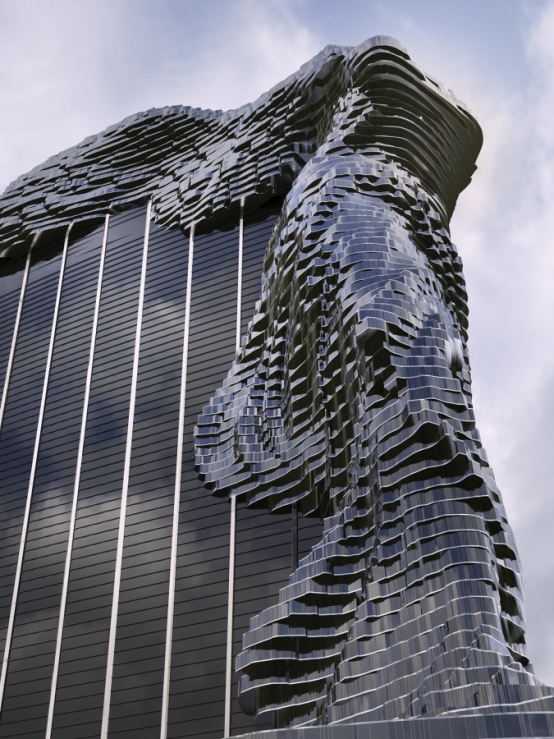 NIKA " With glory at the wings, And feeling of the game, So many heroes passed,To bring their city fame," Klyukin writes.

To view these and many more, visit Klyukin's site; for greater insight into art outside the established system get Raw Creation and Wild Art; for more contemporary architecture on a smaller but eaually innovative scale, get Nanotecture. 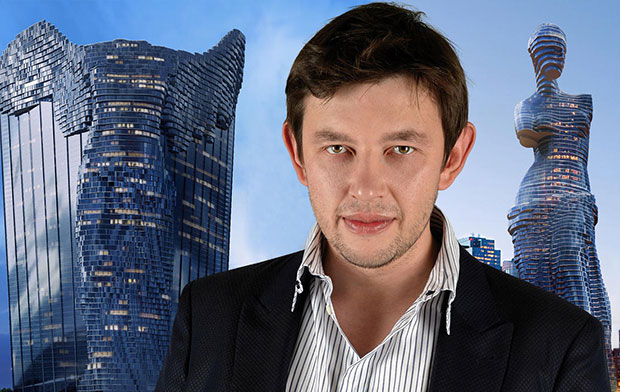 Vasily Klyukin and some of his creations

The most wide-ranging, comprehensive and inclusive book on small-scale architecture ever published.

An inspiring, surprising and fun collection of 300 works of small-scale architecture including demountable, portable, transportable and inflatable structures as well as pavilions, installations, sheds, cabins, pods, capsules and tree houses.

Rebecca Roke has contributed to more than 350 published works about architecture and design, drawing on her architectural background and extensive experience writing, editing, researching and teaching. She has written widely about the work of leading practitioners, such as Ronan and Erwan Bouroullec, Thomas Heatherwick, Rem Koolhaas and Hella Jongerius. Rebecca was editor of Monument magazine in Australia and for Foster + Partners in London, and was the London Correspondent for Inside Interior Review. Roke is based in London and Nanotecture is her first book.

"[T]his delightful volume... is a study in design that can best be described as compact, wee, diminutive, shoebox-sized, impossibly cramped, and big on imagination. [Goes] way beyond the once-fringe/now-trendy tiny house movement." —Mother Nature Network

"The words Roke uses to describe small-scale architecture can also be used for the book she has produced: 'inspiring, surprising and delightful'." —ArchitectsJournal

"300 intriguing small-scale works, from pavilions, installations and cabins to colourful homes for cats, dogs and even bees." —Elle Decoration

"[A] thorough exploration of small-scale architecture." —Vice’s The Creators Project

"Surprising and intriguing... This is architecture at the cutting edge." —Rolls Royce Magazine

"Small in scale but huge in imagination, these tiny constructions celebrate the joy of nanotecture" —The Observer Magazine

"Nanotecture: Tiny Built Things, a new book filled with pint-sized architectural projects, shows just how much you can do with a tiny footprint." —Mental_Floss

"Celebrates the appeal and ingenuity of small-scale architecture" —Architectural Digest

"Everything is small in size, big in impact" —BA High Life

"Miniature marvels... all prove that modesty is no barrier to creativity." —Conde Nast Traveller

"Nanotecture is an ode to spatial efficiency." —Co.Design

"[A] truly entertaining look at some of the best small and compact architectural creations you can find today." —CoolThings.com

"This illuminating book will open your eyes to the world on a small scale." —Homes & Interiors Scotland

"There are so many grand projects and big name architects... it's so nice to see something that's done on a small scale." —Monocle Radio

"Spend time... with Rebecca Roke's Nanotecture: Tiny Built Things, and you see how the small-is-beautiful ethos is also about spiritual improvement, mindfulness and a better relationship to the social and natural world." —The Washington Post Online

"Inspiring and comprehensive... Roke looks at both established and emerging architects." —The Gentleman's Journal

"An inspiring, surprising and fun collection … captures the imagination." —The Garden Design Journal

"Though mini in size itself, the publication delivers a trove of information." —Hyperallergic

"Creativity and originality are not proportional to the size of the project or the fame of the architect." —Abitare (Italy)

"...A must-have on every design lover's bookshelves this month." —Vogue (India)

"This fun and imaginative publication is driven by an appetite to capture how such modestly sized things have the profound ability to make an impact far greater than their physical size." —Architizer

"Nanotecture demonstrates what architects can do when given the freedom to experiment. The results are entertaining and thought-provoking."—Aesthetica