Are Herman Miller’s posters as enduring as its chairs?

MoMA and the Smithsonian seem to think so. Here’s the story behind the company’s poppy summer picnic graphics

Herman Miller is both a modern and, in a sense, an old-school company. The Michigan furniture producer helped popularize modernist styles of design throughout the United States, but it also adopted a fairly traditional, communitarian approach to its workforce. Company founder, D. J. De Pree, was also a lay preacher, and believed his faith led him to value both its workers and good design more highly. 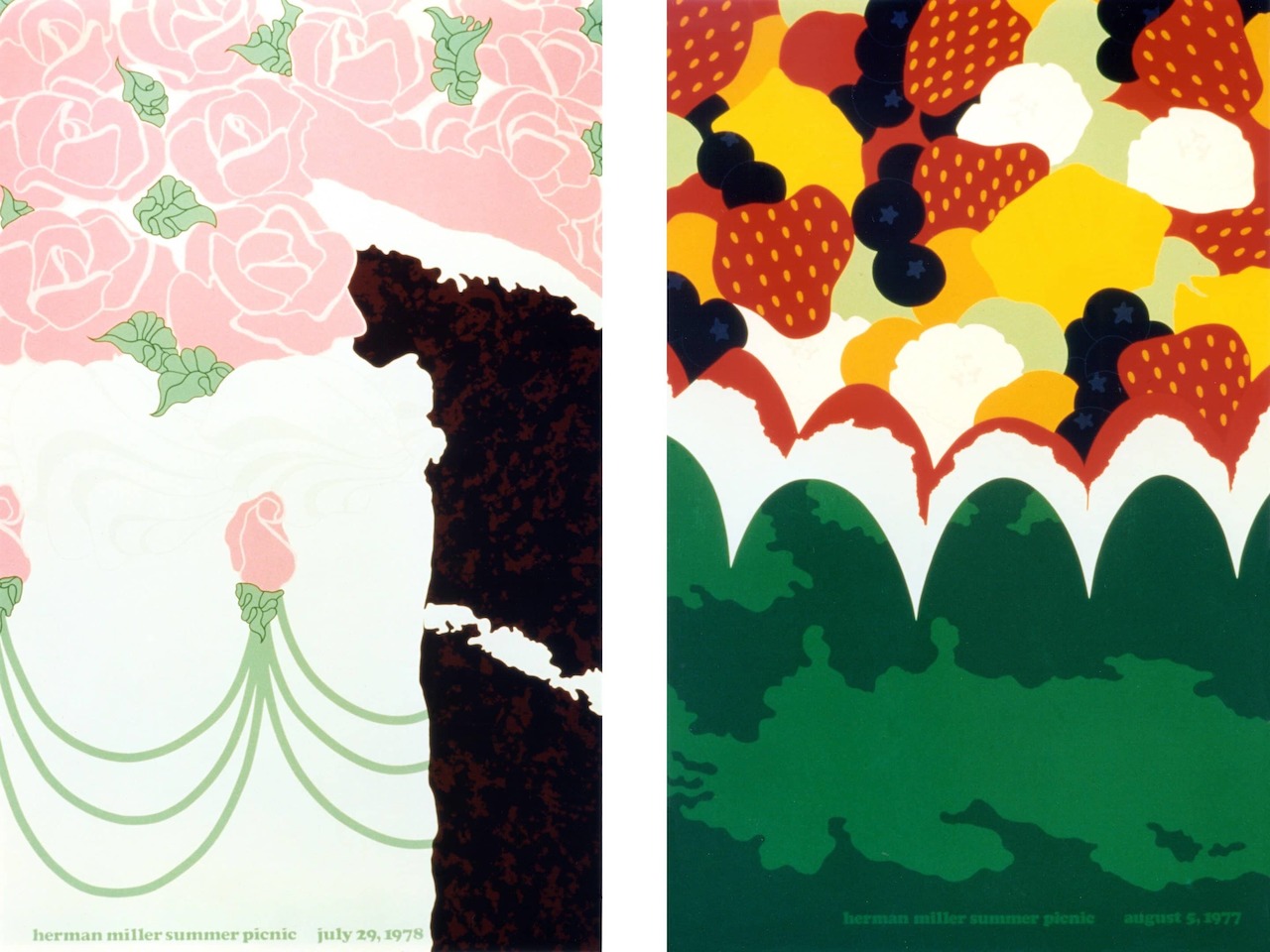 The 1977 and 1978 posters for Herman Miller's summer picnic, by Steve Frykholm, as reproduced in Herman Miller: A Way of Living

Each summer, from the late 1940s onwards, De Pree threw a summer picnic for his employees. “In the early days, D. J. and his wife, Nellie De Pree, hosted the picnics in their own backyard, providing food and fellowship for the Herman Miller workforce,” explains our book Herman Miller: A Way of Living. “As the business grew, so did the picnic. The venue shifted to local parks in Zeeland and included games and contests that awarded prizes like an Eames Lounger and Ottoman or a week’s paid vacation.”

One of the first jobs assigned to the company’s first in-house graphic designer Steve Frykholm when he arrived at the firm in 1970, was to design that year’s picnic poster.

Frykholm had volunteered with the Peace Corps prior to his arrival, and had picked up some screen printing skills, which he brought to bear on that first picnic poster, which had been dubbed ‘the Sweet Corn Festival’ that year. 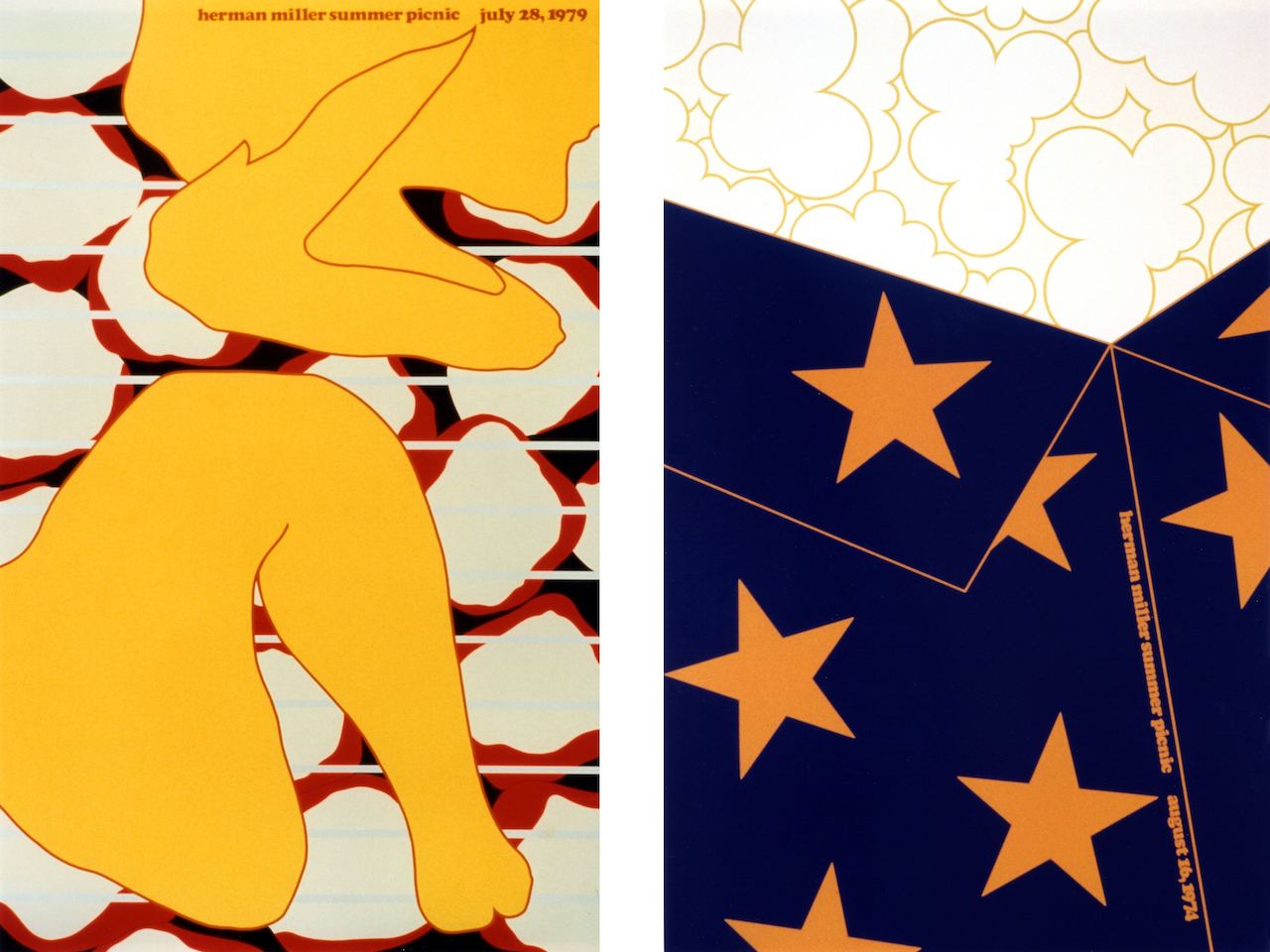 The 1979 and 1974 posters for Herman Miller's summer picnic, by Steve Frykholm, as reproduced in Herman Miller: A Way of Living

The designer was pretty pleased with the resultant image, and entered into the American Institute of Graphic Arts (AIGA) annual competition.

Unfortunately, the designer didn’t read the small print, and only after submitting the poster, did he realize that, in order to qualify, the work must be produced at least in an edition of 500.

“Embarrassed and unsure how to correct his error, Frykholm went to his boss, advertising manager Howard Sutton, and confessed what he’d done,” our book explains. “To Frykholm’s surprise and relief, Sutton agreed that if the poster won the competition, Herman Miller would have to pay to have five hundred copies printed.”

That gamble paid off. The picnic poster won the AIGA competition that year, and Herman Miller made good on its promise. Five hundred copies of the Sweet Corn Festival poster were printed and offered for sale to employees at cost and quickly sold out.

“People liked them because they were familiar,” Frykholm later reasoned. “Food is certainly familiar—even if the vantage point in which I portrayed it might not have been.” 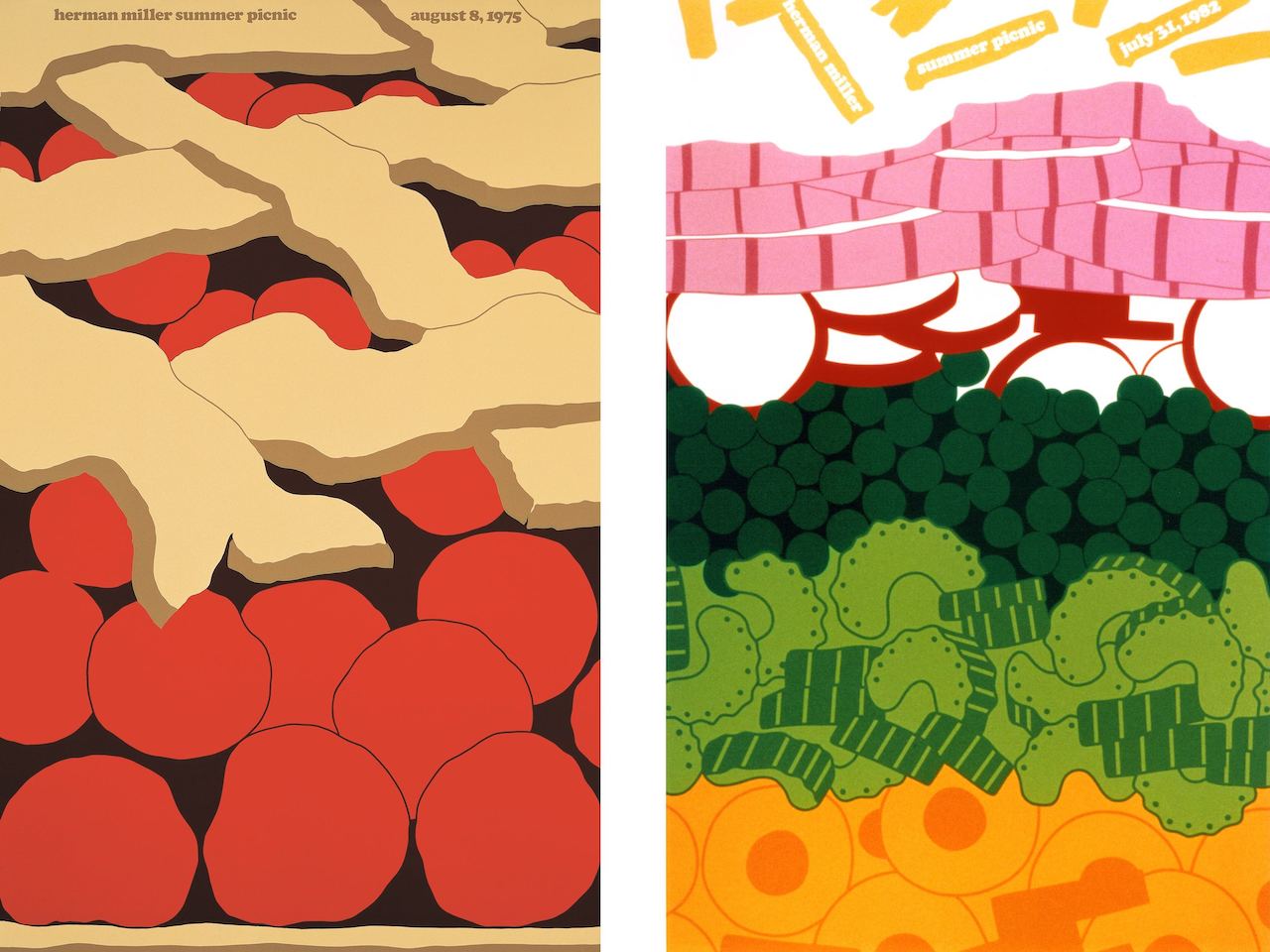 The 1975 and 1982 posters for Herman Miller's summer picnic, by Steve Frykholm, as reproduced in Herman Miller: A Way of Living

Frykholm stayed on at Herman Miller for a further 45 years, and went on to design many more works for the company, including many more picnic posters, which have also gone on to win admirers far beyond the annual company bean feast. The Museum of Modern Art has 12 examples in its permanent collection; while Cooper Hewitt and the Smithsonian Design Museum have laid some down for posterity. Proof, perhaps, that Frykholm’s designs are every bit as classic and evergreen as Herman Miller’s best-loved pieces of furniture.

“A good poster – a poster that is really communicating an idea – is still relevant,” Frykholm argued, when he was asked to look back on his work. And that's something to chew on this summer. 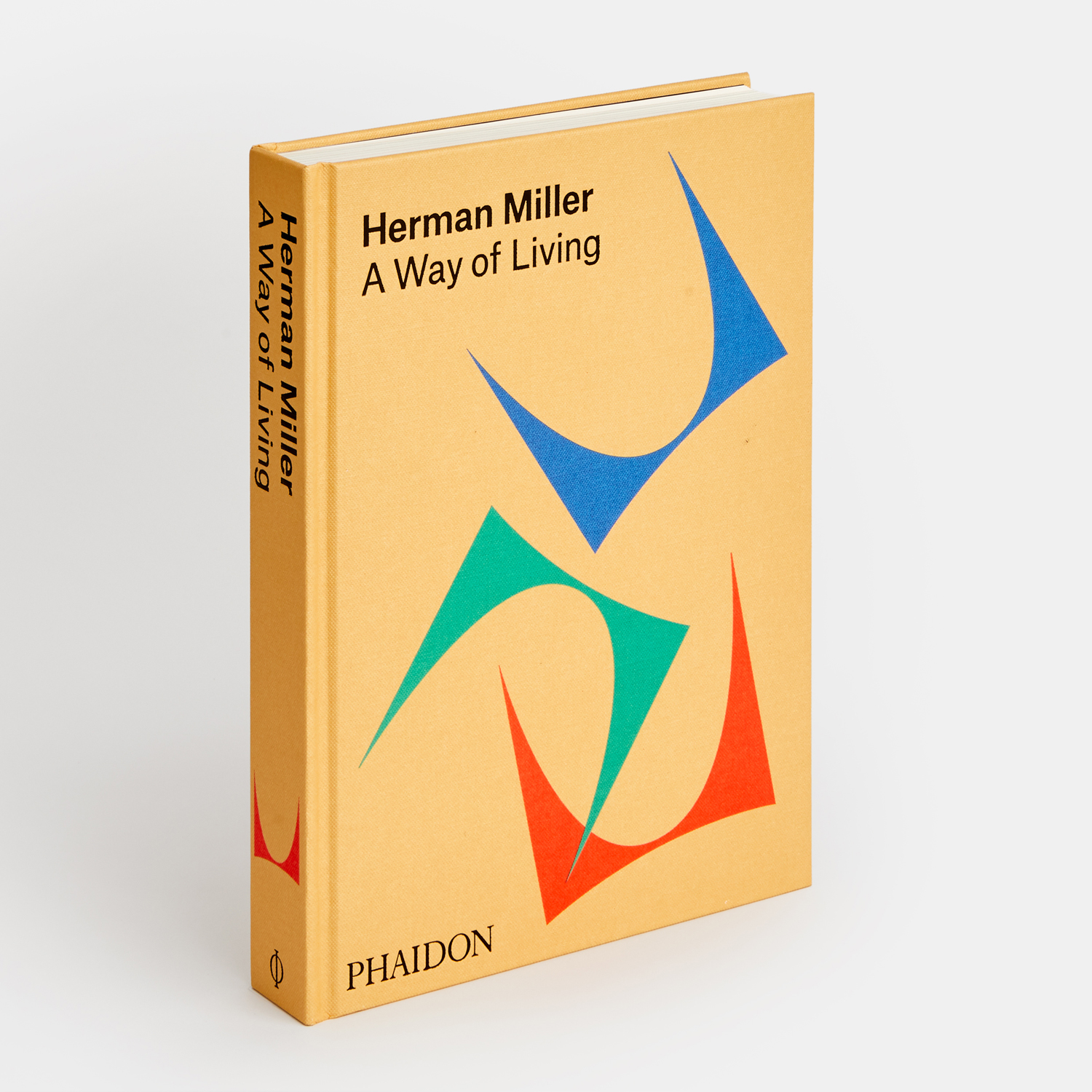 For more on this innovative company and its beautiful products, order a copy of our book Herman Miller: A Way of Living book here.

A chronicle of the rich history of this innovative furniture company, from its founding in the early twentieth century to today

For more than 100 years, Michigan-based Herman Miller has played a central role in the evolution of modern and contemporary design, producing timeless classics while creating a culture that has had a remarkable impact on the development of the design world.

Ten chapters and thousands of illustrations tell the Herman Miller story, documenting its defining moments and key leaders - making Herman Miller: A Way of Living an indispensable addition to the bookshelves of design-lovers around the globe.

"A company archive that is rich with material from and about the legendary figures who helped make Herman Miller a leader in postwar American design."—Pilar Viladas, T Magazine

"Featuring 10 chapters and thousands of illustrations, this new monograph tells the Herman Miller story like never before, making it an indispensable addition to the bookshelves of design-lovers around the globe."—Aspire: Design and Home Magazine

"With countless photographs, clippings from contemporary publications, reprinted essays, correspondence, patents, advertisements, drawings, and posters, this is the most exhaustive history of Herman Miller yet. But despite the enormous mass of material, the book's nimble structure ensures a light reading experience, and even the most erudite of design-history geeks will find novel information."—PIN-UP

"Featuring 10 chapters that go in-depth on everything from key figures in the company's history to pivotal moments in popular culture that shaped its trajectory, this book is the summation of Herman Miller's existence thus far—the most expansive one to date."—Cool Hunting

"A comprehensive history of the brand over 600 pages."—Curbed

"You'll want to clear space for Herman Miller: A Way of Living... The comprehensive 614-page tomb is filled with inspiration of all kinds and is a must-grab for anyone with a deep appreciation for contemporary design and stylish interiors."—Airows

"A must-have for anyone with a deep appreciation for modern and contemporary design, this exhaustive edition showcases one of the most important companies in American history."—Uncrate

"If you're into mid-century modern design, you need this book."—Gear Patrol

"There have been many books about Herman Miller, its ethos, designers, and furniture, but none as comprehensive as this... It's a generously illustrated continuum."—Interior Design

"...A visually stunning, essential coffee-table edition. It's as substantial a design object as any of the company's furniture."—Surface Magazine Online

"Listen up, lovers of midcentury modern furniture! The 114-year history of Herman Miller... is detailed in a new tome. Archivists dug up never-before-published photos, ads, sketches and more in a fitting tribute to the storied company."—New York Post

"...A must for design lovers, midcentury aficionados, and of course, Herman Miller fans."—Dwell Online

"You don't need to have the funds to gift a Hans Wegner chair in order to give a great gift to furniture nerd."—Gear Patrol

"An encyclopedia-like coffee table book... Filled with images from old advertisements, brochures, magazines and catalogs that chronicle... Some of the most significant moments in the company's history."—The Detroit News

"A must for the furniture buff."—Architectural Record

"If the person you're gifting wants and Eames Lounge Chair but you don't have north of five grand to spare, buy them this instead."—Gear Patrol

"The impeccably tasteful world of one of the 20th century's most iconic furniture designers."—Mr Porter