When Larry Gagosian paid Peter Marino with a Brice Marden

Larry Gagosian, the super dealer and founder of the Gagosian Gallery, fills in the 4am slot, describing how he came to own a party-friendly loft apartment on West Broadway, opposite the Castelli Gallery.

"I really had no business buying my loft on West Broadway in those years," he tells the paper. "I had the gallery in L.A., and I had just bought a house in Venice, so I was completely overextended, and it worried me."

Gagosian wasn't the kind of guy to fit out a loft himself, but he didn't have the cash flow to pay an established architect or designer to refashion the raw industrial space, which had been used to as a paper storage facility, into a home becoming of a hot, young art dealer.

Fortunately, he ran into a young architect and designer in the lift of his building called Peter Marino, who was fitting out the penthouse. Marino, is now equally famous for his exquisite interior treatments for such brands as Dior, Fendi and Chanel, and his leather daddy clothes. However, Larry reveals "he was in his preppy stage in those days, wearing button-downs, which really is hard to imagine now." 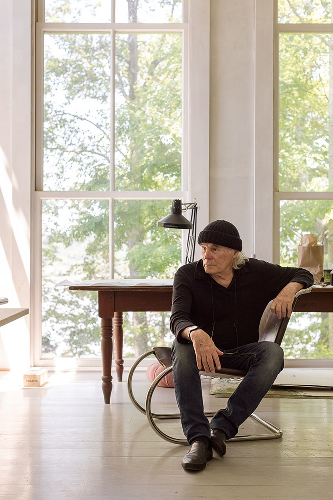 Larry decided to negotiate. "I made a deal for him to do a cheapo job by trading a Brice Marden plus $10,000," recalls Gagosian. It seems like everyone was happy. Gagosian still represents both Marden -  the most profound abstract painter of the past four decades – and now he represents Marino too! Gagosian London hosted a show of the architect's cast bronze objects, Fire and Water, last year.

For more on Peter Marino order this book; for more on Brice Marden get this one; and for more on artful interiors get In The Studio, a two-volume set published as a collaboration between the Gagosian Gallery and Phaidon