To some people Agnes Martin could seem like the kind of artist who might have complained about her neighbours’ stereo, rather than crank up her own hi-fi. After all, the US abstract painter relocated from Manhattan to New Mexico in the summer of 1967, partly to get away from the noise and bustle of big city life.

However, as anyone who has read our Agnes Martin book will know, music actually mattered a great deal to Martin. The artist adored classical composers such as Handel and Beethoven, and recorded in her notebook - the text of which is reproduced in our Agnes Martin monograph - how closely allied her own work was to musical appreciation.

“Art work that is completely abstract - free from any expression of the environment - is like music and can be responded to in the same way,” she wrote. “Our response to line and tone and color is the same as our response to sounds. And like music abstract art is thematic. It holds meaning for us that is beyond expression in words.”

The Tate Modern staged concerts to coincide with its recent Martin retrospective, and, now that the exhibition has travelled on to New York, it is Manhattan’s turn to set the pictures to music.

Over the next couple of nights, the contemporary composer John Zorn will oversee a recital of his own work inspired by Martin’s art. The concert staged tonight, 1 December, and tomorrow night, inside the Guggenheim’s rotunda in NYC, complements the museum’s current Martin retrospective. 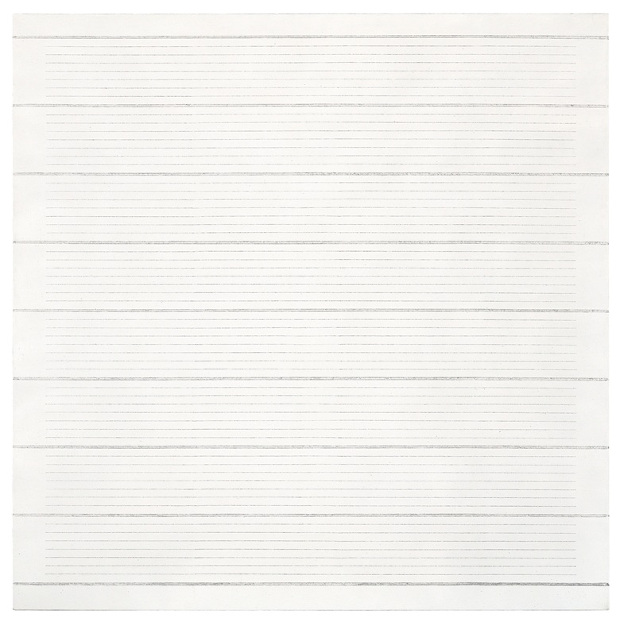 Zorn and his players will perform Redbird from his 1995 album, Dark River, a piece directly inspired by Martin’s 1964 painting Red Bird, as well as new pieces, Praise and Blue Stratagem, which also draw on the artist’s work.

So, what does Zorn see in Martin’s works? Much more than simple lines. The composer tells Art News, “I don’t see grids when I look at her work. I see love. I see transcendence. I see purity. I see infinity.”

Perhaps We’ll be able to hear that tonight. The Guggenheim is offering standby tickets at the door from 6:50pm onwards, on a first-come-first-served basis. Go here for more, and for greater insight into Agnes Martin take a look at our book, here.

More on Music to watch Agnes Martin to