Though he remains perhaps the most important architect of the modern era, Le Corbusier wasn’t born a modernist. As our new book Le Corbusier Le Grand explains Charles-Edouard Jeanneret – as Le Corbusier was christened – was raised as a Lutheran in La Chaux-de-Fonds, Switzerland, and initially adopted the prevailing artistic tastes of the time.

“At the local art school, Edouard came under the spell of the charismatic teacher Charles L’Eplattenier,” explains our new book. “The master’s ideal, evident in Jeanneret’s early work, was to create an Arts and Crafts decorative style that would reflect the character of the surrounding Jura mountain landscape.

“Encouraged by L’Eplattenier, in September 1907 Jeanneret began a ten-year cycle of travels across Europe and the Middle East,” the text goes on. “During these trips he veered dramatically in his interests and taste, almost always under the influence of a new friend and mentor.”

However, this teacher’s influence would soon abate when Le Corbusier, then still in his early twenties, began to look towards another mentor.

“In Paris, he began a period of hero worship of the architect Auguste Perret, working in his office from June 1908 to the end of 1909” explains our book. “Under his influence, Jeanneret abruptly abandoned the Arts and Crafts principles for a strict structural rationalism based on the use of reinforced concrete.” 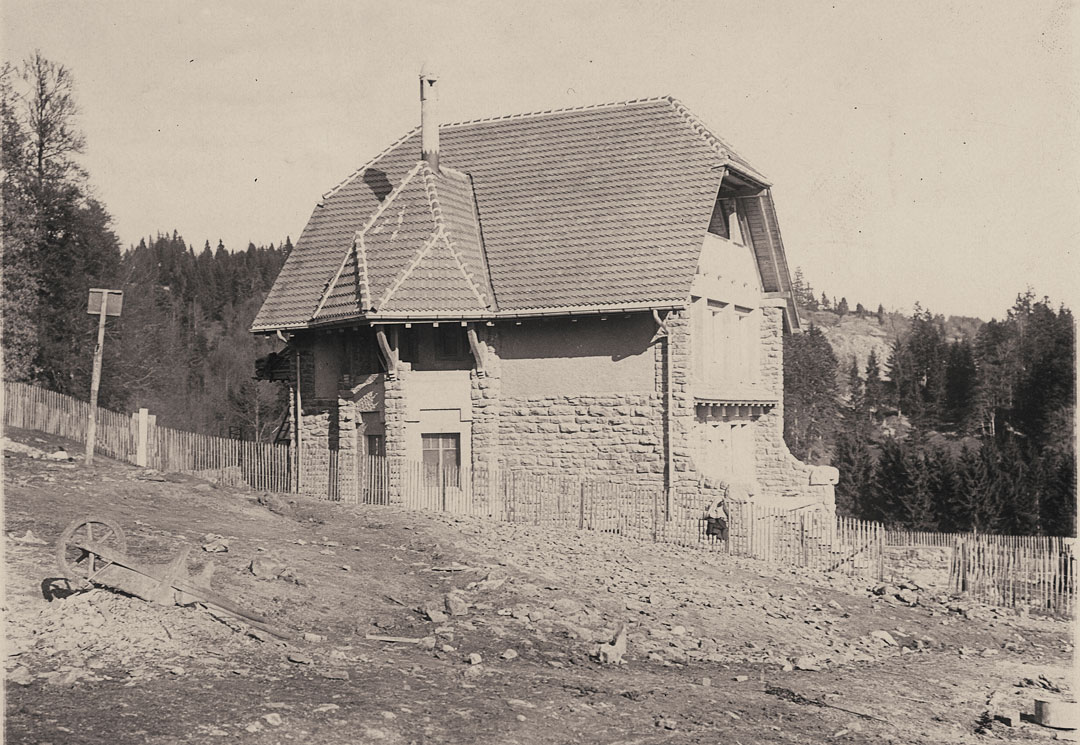 Villa Jacquemet, one of Le Corbusier’s earliest commissions, comes at the end of his brief dalliance with Arts and Crafts, and just before his life-long love affair with concrete.

The building, which is in the Swiss district of La Chaux-de-Fonds, was built 1907–8; Jeanneret designed both this and its counterpart Villa Stotzer while living in Vienna, and, the buildings both contain elements of traditional, vernacular architecture of the region.

“The houses combine elements of a Jura farmhouse, rusticated Gothic stonework, plain stucco walls, and pine tree motifs (in the eaves and windows) with a structure of reinforced concrete - which was becoming increasingly common in residential buildings in the region at that time,” explains our book.

Over the following decades Le Corbusier would strip away those vernacular trappings, to expose that concrete heart. Yet he would never entirely ignore the old ways of doing things.

As our book points out, “he later said that the trouble with most architects was that they lacked a sense of art history and knowledge of the great rules of art.”

To see many more of Le Corbusier’s early drafts and completed designs, buy a copy of Le Corbusier Le Grand here. Documenting the life and work of one of the giants of twentieth-century architecture and design, the book presents an array of sketches, photographs, and correspondences, charting the vast and varied output of Le Corbusier, an artist who continues to fascinate those inside and outside the architectural world.