Le Corbusier regarded the UN HQ in Manhattan as his work. Despite evidence to the contrary, should we too?

By the end of the 1920s, the Swiss French architect Le Corbusier was focused on obtaining major commissions - what he termed ‘Les Grands Projets,’ explains Jean Louis Cohen in our new into papterback book, Le Corbusier Le Grand. “For the two-part competition to design a group of buildings for the League of Nations headquarters in Geneva, he adapted his revolutionary Five Points of a New Architecture” to a greatly expanded public scale.​

However, “his loss of the competition and the ensuing controversy were the source of tremendous personal bitterness,” the text goes on to explain, though "it also generated worldwide celebrity for the ambitious architect.”

Two decades later, fame and misfortune drove Le Corbusier to put forward his own plans quite forcefully, when he was appointed to the board of design consultants overseeing the new United Nations HQ in Manhattan. 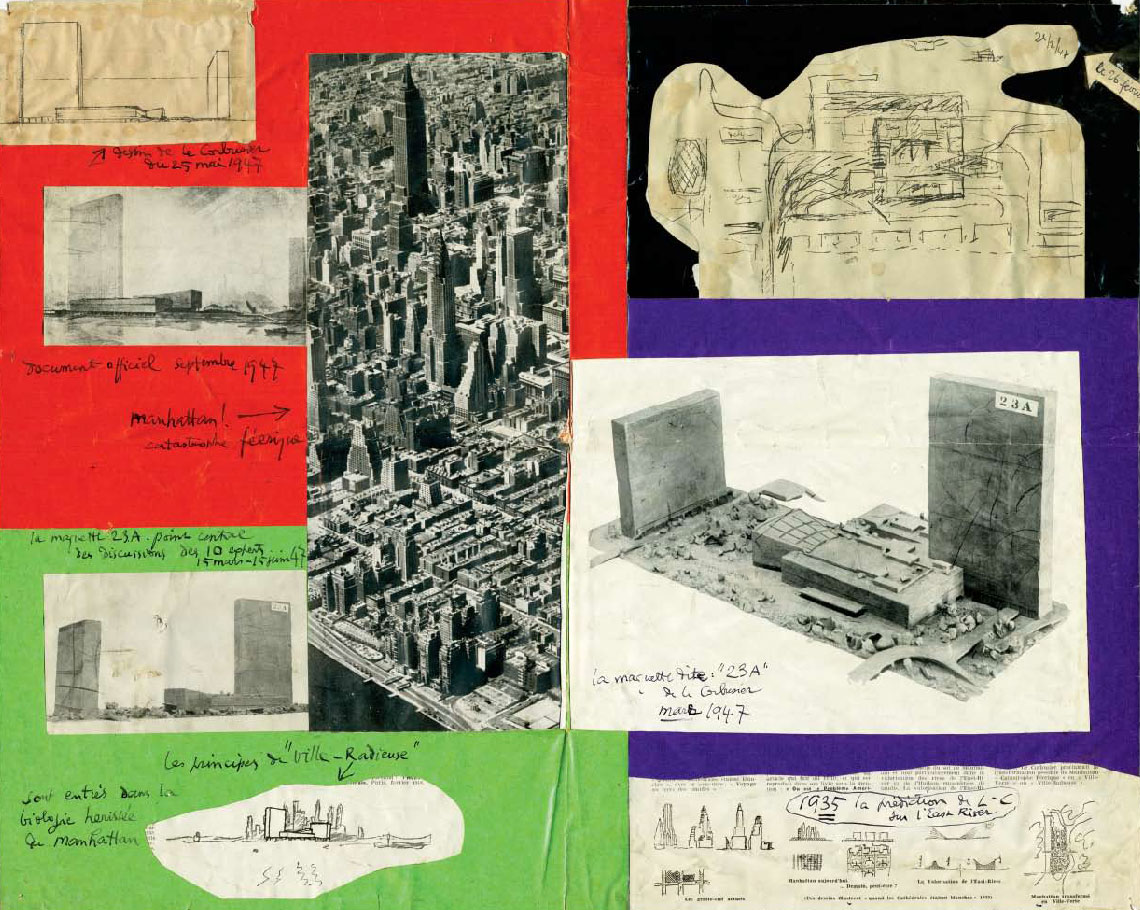 Above. A 1947 collage of plans, models, and drawings for Project 23A, with an aerial photograph of Manhattan encompassing the project’s site. From Le Corbusier Le Grand

“Le Corbusier’s humiliating loss of the League of Nations competition twenty years earlier repeated itself in 1946–47 in New York, where he spent many months trying to impose his views on the committee responsible for designing the United Nations headquarters. Although he was not allowed to take charge of the project, he never ceased to assert that the finished building was based on the model he claimed was his design.”

His letters from the time describe a less than harmonious working atmosphere. “I’m working here with Harrison, an American who’s a fraction jealous, and 14 architects from different nations” he wrote to his mother on 6 May 1947. “1/3 hostile, 2/3 in favor. The draftsmen have become my friends. We can do something magnificent, and that’s why I forge on.”

Officially, the building’s design is credited to the committee – which included Le Corbusier – though many say that the completed complex more closely resembled the designs submitted by the Brazilian architect Oscar Niemeyer. 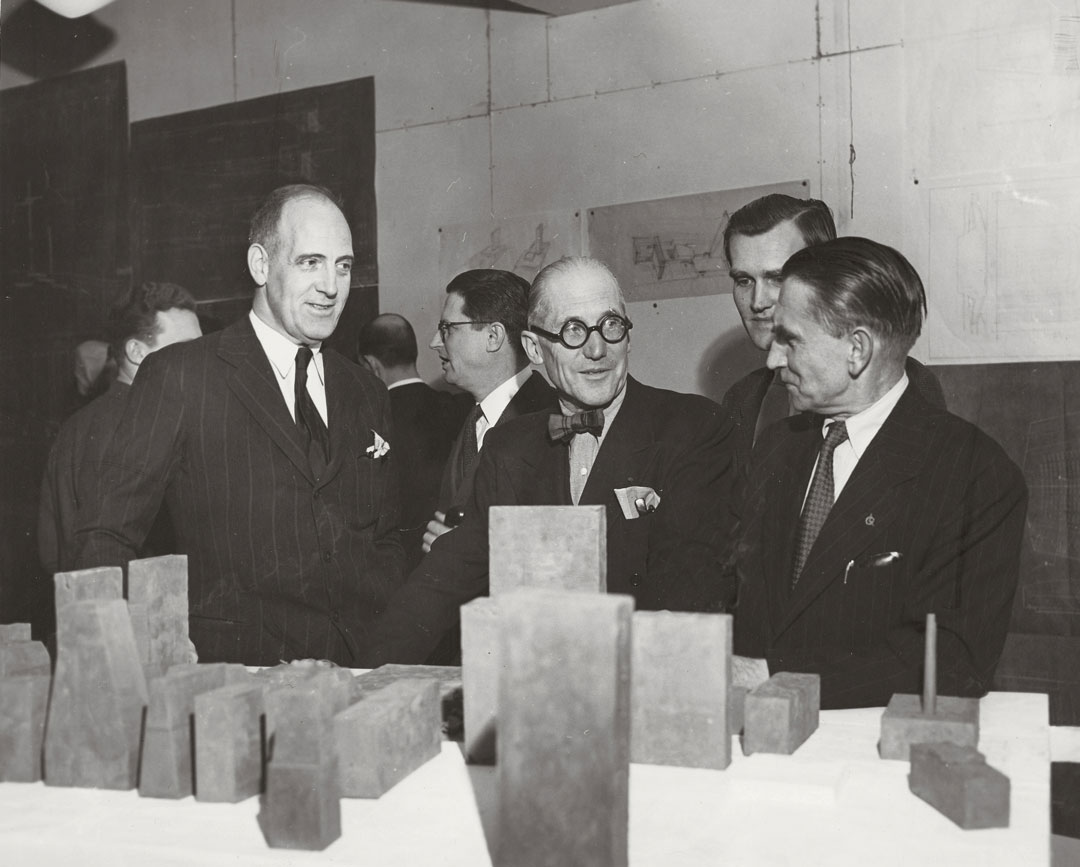 This must have hurt Le Corbusier,  as the Brazilian was his junior, both in terms of age and professional stature. “Niemeyer, one of ten architectural delegates working on the project, had been Le Corbusier’s associate on the Ministry of Education building in Rio de Janeiro ten years earlier,” explains our book.

Indeed, some allege Le Corbusier was more than just forceful in his attempts to assert his as the building’s main plan. Our book reproduces a signed affidavit from Max Abramovitz, the American architect who helped oversee the committee, stating that, after the final plan for the HQ had been settled on, “I saw Mr. Corbusier [sic] take off the wall the sketch of the plan referred to above, redraw it in his own hand and style, redate it, initial it, and put it back on the wall.” 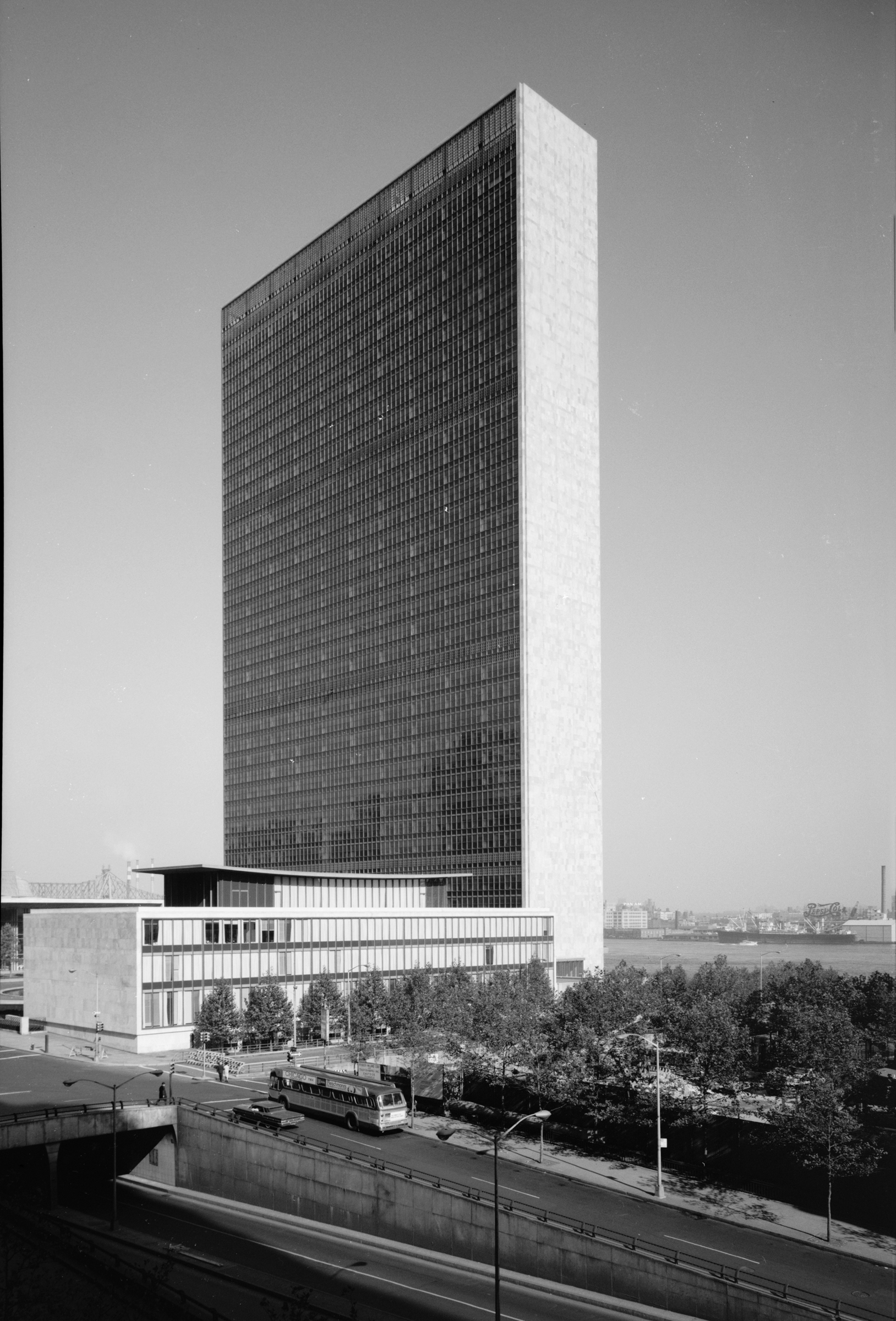 Regardless of these claims, “to the end of his life, he remained bitterly insistent that the building was based on his design,” Cohen reveals in Le Corbusier Le Grand. And while some works on paper don’t bear a strong relation to the finished building, others are strikingly similar. In terms of ambition and determination, the architect’s work on the UN Headquarters was certainly one of his Grands Projets, even if his role creating the finished building remains cloudy.

For on both this project and many, many others, order a copy of Le Corbusier Le Grand here. Documenting the life and work of one of the giants of twentieth-century architecture and design, the book presents an array of sketches, photographs, and correspondences, charting the vast and varied output of Le Corbusier, an artist and architect who continues to fascinate those inside and outside the architectural world.