A new camera might not seem to be that big a deal for an 80-year-old Magnum photographer. However, when our beloved René Burri received his Leica M Monochrom in Zurich last week, it came with no small amount of ceremony.

Leica executive Dr Andreas Kaufmann presented the brilliant Swiss photographer with an engraved Leica M Monochrom camera as his part of his Leica Hall of Fame Award. This occasional prize, which has also been awarded to Steve McCurry, Barbara Klemm and Nick Út recognises "photographers who have rendered outstanding service to the Leica brand and to the genre of photography." 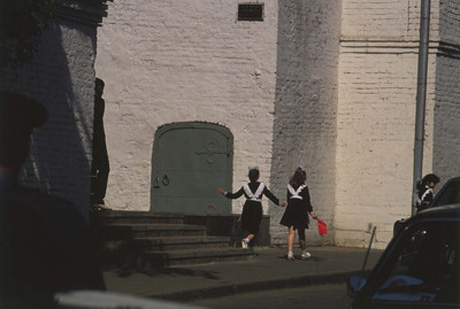 Burri, a lifelong Leica user, is obviously a worthy recipient, yet the choice of camera model and venue are slightly incongruous. Burri received his award at Zurich's Museum für Gestaltung, which is also hosting René Burri: A Double Life, the colour-photography retrospective staged to coincide with our full-colour collection, René Burri: Impossible Reminiscences.

The Leica M Monochrom, meanwhile, is the "first full-frame, 35 mm format digital camera to be designed exclusively and without any compromises for black-and-white photography."

Yet, colour or monochrome, there's no denying Burri's body of work, as Kaufmann acknowledged in his award speech, which described, " Burri has created images that are inextricably linked with the photographic memory of our world."

Find out more here. Take a look at our great René Burri books here, including Impossible Reminiscences; and for more on fellow Hall of Famer, Steve McCurry, go here.