It's with a heavy heart at phaidon.com that we have to report that René Burri passed away today after a long battle with cancer. René was one of the most entertaining, passionate, talented and warm-hearted people we have ever had the pleasure of working with and leaves behind an unbelievable body of work.

As befits someone who'd photographed everyone from Churchill to Che Guevara, René Burri had a weapons grade arsenal pf wonderful stories and anecdotes, and he told them extremely well. One of our favourites was one he revealed in the garden of his Paris apartment a couple of years ago when we were interviewing him for his memories around the book Impossible Reminiscences. It concerned his mentor, Henri-Cartier Bresson and his habit of looking at negatives upside down. It infuriated all the Magnum photographers but particularly irked the Swiss-born Burri who revealed how, with one of his most famous photographs he managed pulled the wool over the Magnum founder's expert eye and, as he put it that afternoon, "killed my mentor!"

Bresson was the founding father of modern photojournalism, an early adopter of the 35mm format and the forerunner of what’s now commonly known as street photography. In 1947 he co-founded Magnum Photos, a cooperative photographic agency effectively owned and managed by its members. Burri began working with Magnum in 1955, becoming a full member four years later.

“Bresson was my great teacher,” René told phaidon.com that afternoon. “We had a great relationship, though elements of it were antagonistic. But we inspired each other. In those days even among ourselves at Magnum there was no feeling of competition. People said how can you 15, 20 guys live together without bashing in each other’s heads? But the truth is when somebody did something that you really wanted to do it actually felt great that they’d done it. That kind of feeling was strong and kept us all going. 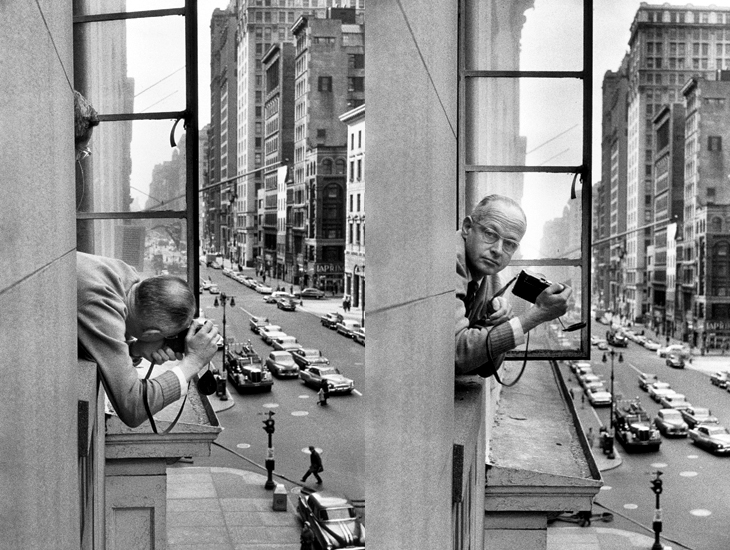 "But Henri aggravated me very often. Why? He would look through your contacts upside down! He did this because he always wanted to see the composition. And I used to say, ‘I’m going to strangle you one day! Isn’t it interesting looking at my pictures?’ But I learned so much from that and the moment came when I too pulled the picture over the separations slip on the contact sheet and tried to look at it in the same way.

“At that point I learned that you have to go beyond the image. Cartier-Bresson was the greatest ever on 35mm -  in that sense of composing and taking it up to the ‘orgasm’, or what he called ‘the decisive moment’.

“But I was of a completely different temperament to him. I remember, one day I told him well you have your decisive moment and I have mine! I shot - like on some of the iconic photos - one or two or three images only. I was very economical. In those days you had to look through exactly and that’s what I still do now."

Burri's career began in the immediate post-war period, yet his early life was overshadowed by the rise of Nazism. Born on 9 April 1933, a few weeks after Hitler had seized control of Berlin, he was raised in Zurich.  Although his father was an enthusiastic amateur photographer, Burri drew and painted enthusiastically as a child, and his family assumed he would train as an artist.

However, his first photograph, of Winston Churchill’s arrival in Zurich in 1946, taken when he was just 13, displays a precocious feel both for the timely news event and the principles of image composition.  Upon leaving school, he began to shoot professionally, specializing in swiftly captured, fleeting images.

In early 1950 he began a three-year course at the Zurich School of Art and Crafts, studying photography under Hans Finsler, a master of the restrained, artfully composed New Objectivity school of photography. However, other practitioners also influenced the young Burri, including Edward Steichen and Robert Frank, both of whom addressed Burri’s class in May 1952. Taken with their quick, decisive style of photography, Burri began taking on editorial assignments shortly after leaving school. 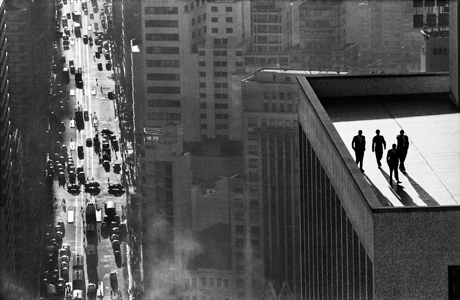 Men on a Rooftop - René Burri

In 1953 Magnum photographer Werner Bischof showed Burri’s first big magazine shoot to his colleagues at the agency. Robert Capa, Chim, Ernst Haas and Henri Cartier-Bresson all expressed their admiration for Burri’s work. He began working for the agency in 1955, specialising in the capture of fleeting, brilliantly composed images. “Pictures are like taxis,” he once said, “if you’re not fast enough, someone else will get them first.”

Working for the nascent agency, founded in 1947, was an incredible accolade for any photographer. Yet, the agency’s assignments were often risky. Bischof himself was killed in an accident in the Peruvian Andes shortly after introducing René to the group, and Burri’s own trips proved eventful.

In 1956 he was sent with writer George Gerster to cover the recently nationalized Suez Canal. Upon disembarking from an oil-tanker convoy at Port Said, Burri and Gerster were met by an Egyptian solder, “who unceremoniously loaded his rifle and released the safety catch,” Gerster recalled. Burri confronted the serviceman and a rowdy mob gathered around the pair. “If the harbor director had not intervened,” Gerster said, “Burri would have been lynched.”

That afternoon in Paris, René also told us about how he came by one of his most famous photographs Men on a Rooftop. "I had been in south America shooting street scenes as part of a commission for the magazine Praline" he explained.

“Back then when we started, things were so different,” he told us. "We tried to get somewhere with the minimum. I never had money and never looked for money. I started early, with my training at art school, to come up with a look for precise things and maybe a little bit in a natural way. I was always surprised that I could see the perspectives, the geometries."

At the time Burri was beginning to experiment with geometry in his photographs. As a student he had fallen in love with the emerging modern architecture of the day (indeed, Burri went on to form close friendships with Le Corbusier and Oscar Niemeyer). In Men on a Rooftop the city stretches out miles beyond what is happening on the rooftop, encapsulating the millions of lives below in one, single frame. 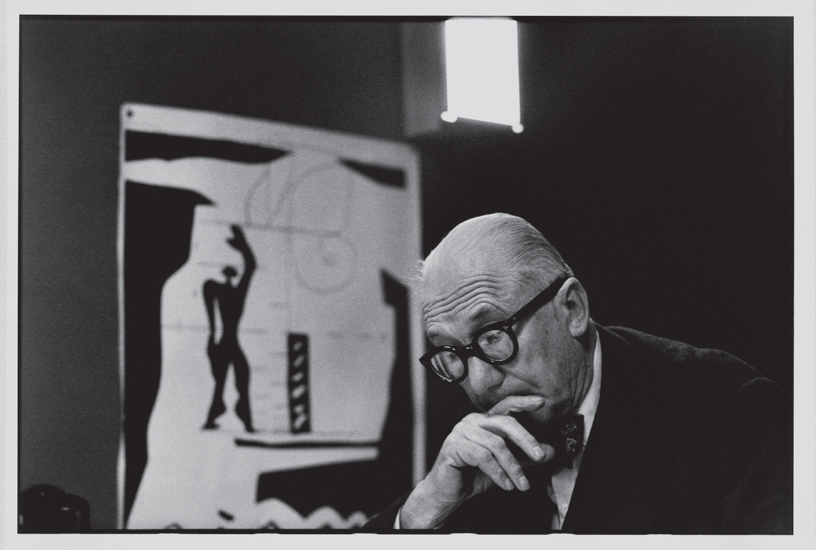 “The photo came about as part of a process of doing a story on the city, and all the people in a city and all the contradictions of the city," Burri told Phaidon.com that afternoon. "Really, I was just travelling around, it was an assignment. But the more and more I got in touch with, how should I say, my own vision about things - which sometimes went a little bit beyond what the people expected from a more popular view on a city or a theme - I found out things for myself. It was ‘self-inflicted’ in a way. Some of my own stories and ideas just came out better than when someone sent you somewhere and said, ‘Do this’ or ‘do that’. Because when you got to the place it looked completely different. So when you came back with something they’d say ‘oh that looks really interesting’.

“Did I know those men were there when I took that photograph? No. I went up there out of curiosity. I remember taking the elevator to the roof. Buildings weren’t guarded in those days; they didn’t have guardians as they have now. It was a question of getting to the top and knocking on the door. And then saying excuse me’. Excusez-moi, ce que je peux faire une photo? Desculpe-me, posso tirar uma foto? ‘Yeah, yeah, yeah. Come in!’ so I walked out onto the terrace and at that moment those guys came from nowhere and I shot five images.

“In those days Henri Cartier-Bresson limited us to lenses from 35 mm to 90 mm. When I showed him the photos he said, ‘brilliant René!’ I went outside and shouted ‘Hah!’ He heard me and said ‘what was that?’ I said, ‘nothing, never mind’. The lens I used was 180 mm – I never told him! At that point I broke loose from my mentor. I killed my mentor!” 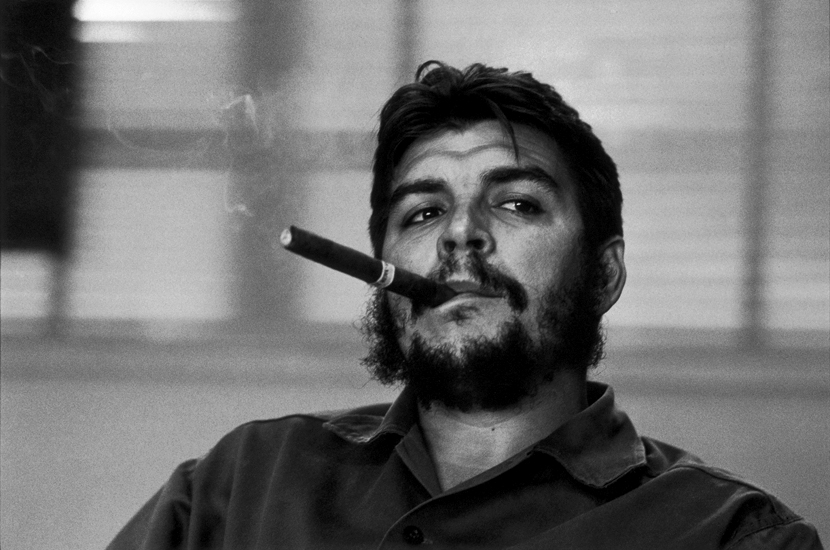 Despite their occasionally frosty relationship Burri travelled to Cuba alongside Cartier-Bresson in the hope of tracking down Che Guevara. The Magnum photographers were on assignment for Look and Life magazines respectively. Within minutes of meeting Guevara in his office on the eighth floor of the Hotel Riviera, a furious ideological dogfight broke out between the Cuban rebel leader and Laura Bergquist, the journalist with whom Burri was working.

"He didn’t look at me once..." Burri told us, but that didn’t stop him seizing upon what he called an "incredible opportunity" to shoot Che in all kinds of situations: smiling, furious, from the back, from the front."I used up eight rolls of film," he said. The famed image of Guevara we know best was snatched by Burri as Guevara sat back in his seat after lighting a big Havana.

It has since taken on incalculable cultural significance, yet Burri, with typical modesty, said "the picture is famous thanks to the chap with the cigar, not me." He once told us that the image - along with 22 others he shot that day - was "cropped badly" by the magazine in which it appeared! Typical photographer. RIP René, it was a real pleasure and an absolute honour to work with you. 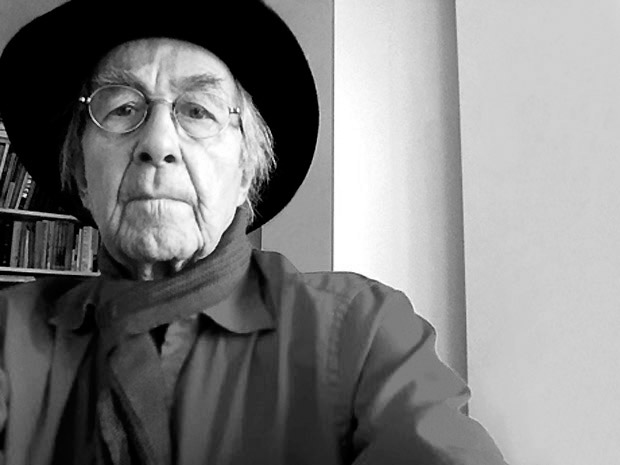 René Burri at the Phaidon offices May 2012