Darin and Greg Bresnitz know something about recipes for success. The brothers have been able to bring food and music together in their hit podcast, Snacky Tunes; they’ve boiled the essence of that show down into a brilliant new book, in which chefs share their love for music; and they’ve now translated that new book into a hot line of t-shirts, created by the designers Naomi Abel and Terence Teh for the cult LA label, EVERYBODY.WORLD. There are five garments in the range, each inspired by a different chef featured in the book. Greg explains how it all came about. 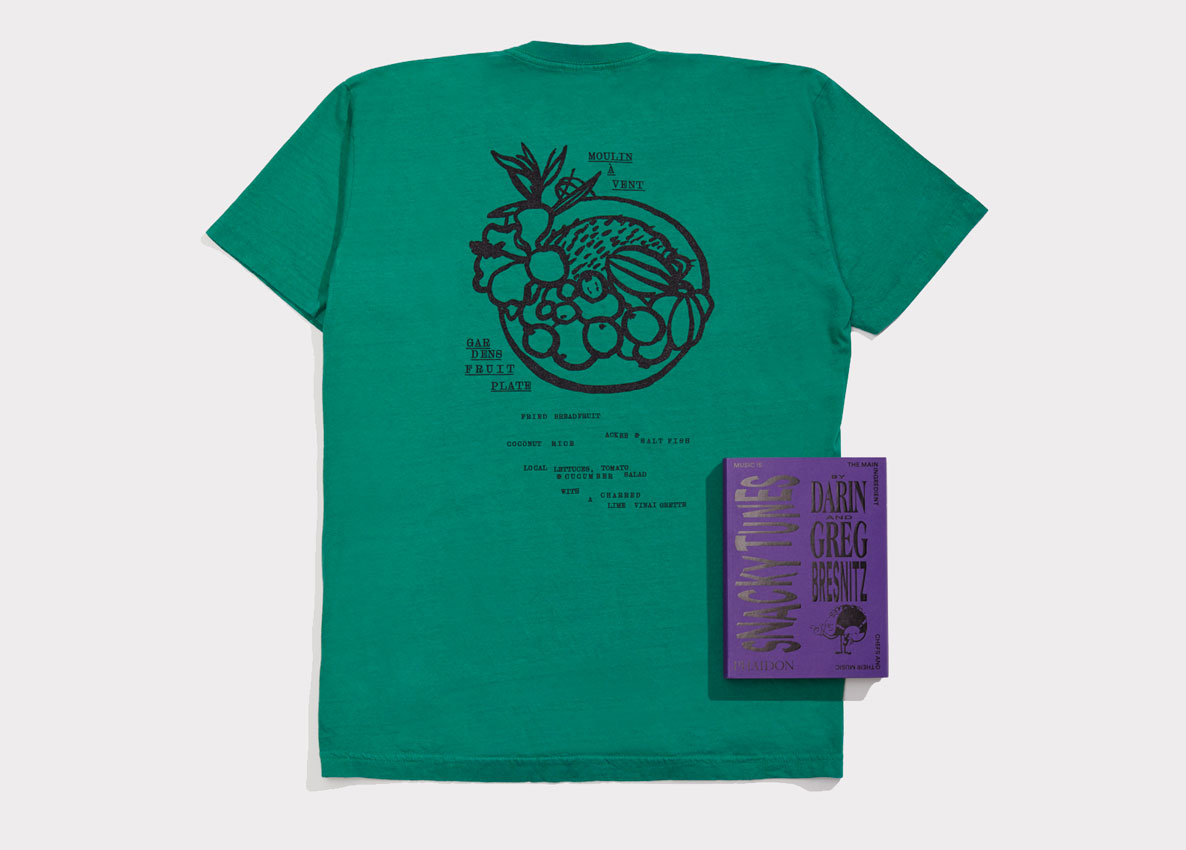 “After we finished the manuscript for Snacky Tunes, Terence and I were talking about different project ideas for offshoots of the book. We were in the first phase of lockdown and we knew that we could not approach this launch the same way as before, that we had to try different ways of building the universe. He gave me a masterclass on the difference between schwag (logo slapped on something) vs merch (creating something people actually want). As our discussion and my education grew, I asked if he would come on board to help Creative Direct, which is how Naomi was brought on board.

“From there, I followed her work and the early days of EVERYBODY.WORLD, reconnecting again when she spoke at Study L.A. During that time, I got to meet Ariel, who was part of the EW team, but more importantly is just a great human being. Completely unrelated, they and Terence were old friends as well.

“I met Iris Alonzo, who is co-founders of EVERYBODY.WORLD with Carolina Crespo, when she was at American Apparel. From there, I followed her work and the early days of EVERYBODY.WORLD, reconnecting again when she spoke at Study L.A. During that time, I got to meet Ariel Katz, who was part of the EW team, but more importantly is just a great human being. Completely unrelated, they and Terence were old friends as well. 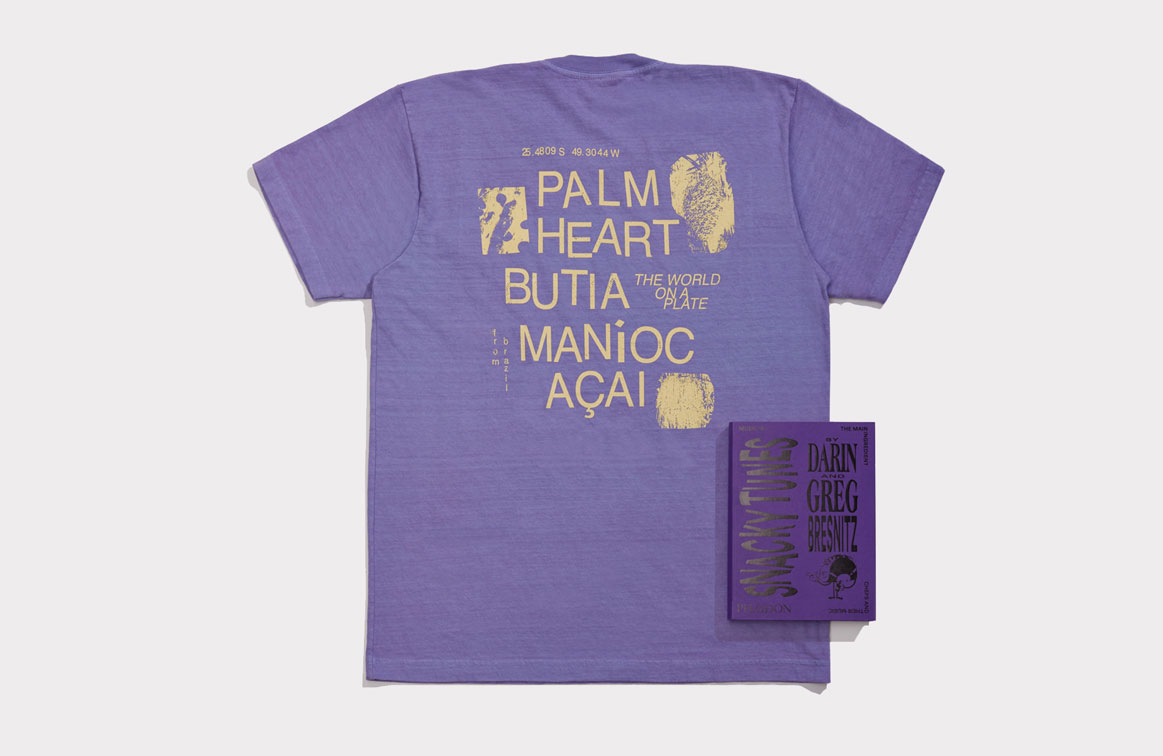 “EW’s approach to 100% recycled cotton & completely biodegradable was incredible and it didn’t hurt that it was well known they made the most comfortable clothing. The first idea was just buy the blanks, but we loved EW’s collaborations approach, we asked if they would be partners, to which they said yes. After that – like good producers, we turned the project over to the experts (Terence and Naomi) and got out of the way.  They’ve really put a lot of creative thought into matching chefs’ music with colours and design. The designs are incredibly personal and well thought out.”

Speaking of which, here’s Terence and Naomi on the garments themselves. 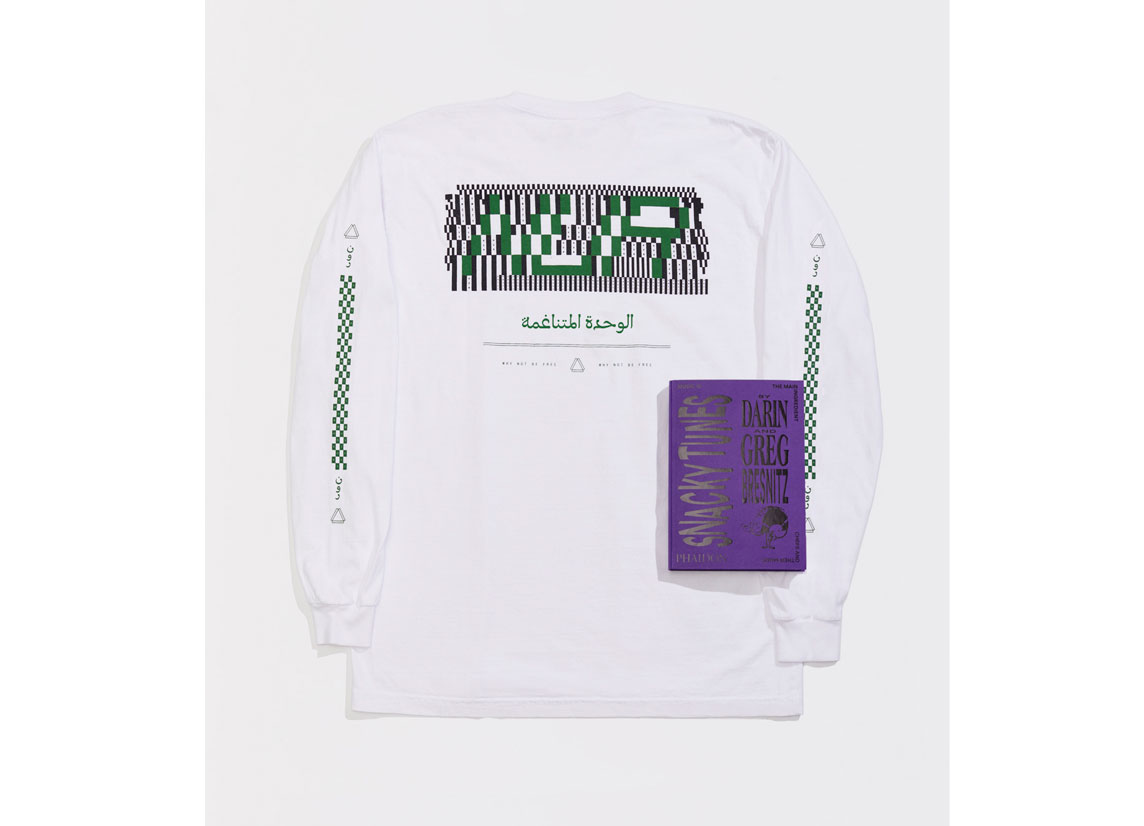 Nina Compton’s design : “Nina's vivid stories of long lunches in St Lucia were something we wanted to hear more about in the book, and we asked if Nina would like to recreate her favorite family menu. She sent us a few pictures and we were really taken with this fruit plate image she sent that we felt really captured the lush vibrancy of her home.”

Bonnie Morales’ design : "We really wanted to lean into an almost folkloric style of graphic based on the album covers of Pesnyary, a Soviet Belarusian folk rock band that Bonnie referenced.

May Chow design : “This was a bright, layered, hand cut collage of ingredients that connects May's two restaurants including lemongrass and limes.”

Najat Kaanache design : “The harmonious unity of food, community and Medina life in Fez, as described by Najat, was a moving relationship that we wanted to celebrate. We wanted this composition to feel really textured and layered, almost as if you could look at it and keep discovering new elements.”

Manu Buffara's design: “We spoke with Manu about putting together her dream line up of specific ingredients from Curitiba as a show flyer with bossa nova inspired colors. We definitely wanted this to feel a bit rougher and lo-fi, which I think is really nicely offset with the bright colors.”

You can buy them all here; proceeds from each shirt funds a charity of the chef’s choice and all garments are made from reclaimed US-grown cotton manufacturing waste, and sewn by EVERYBODY.WORLD’s employees, who are paid fair wages. Meanwhile, for more on the book that began it all, order a copy of Snacky Tunes here.