On his US tour, the Cosme chef hangs out with Californian farmhands, star chefs and the Chez Panisse proprietor

Enrique Olvera understands that, in order to serve good food, you first of all need to have good produce. No place in the US grows better crops than Chino Farm, a family-run agricultural concern just north of San Diego. The 47-acre plot was first cultivated by the Japanese couple Junzo and Hatsuyo Chino after they were released from wartime internment camps following the end of WWII. Today, it is still run by the Chinos’ children, who grow and sell high-quality fruit and vegetables, primarily for upmarket restaurants.

Chino farm has been supplying Alice Waters' Chez Panisse restaurant since the 1970s. What's more, its not only the crops that Chino's proprietors care for; the farm has been staffed by workers from a single village in the Mexican state of Oaxaca for decades.

So, when Olvera had finished mixing with the culinary stars on the East Coast, he made sure the first stop on the West Coast leg of his tour was at Chino, where he signed books last Sunday, as part of the local books and food initiative, Good Earth Good Chefs.

Chino has hosted many famous culinary names in the past, including Waters, Sean Brock and Nancy Silverton, yet Enrique was the first visitor whom the workers wanted to meet as much as the book-buying visitors. High praise indeed for their fellow countryman, who had, up until this point, been mixing in very different company. 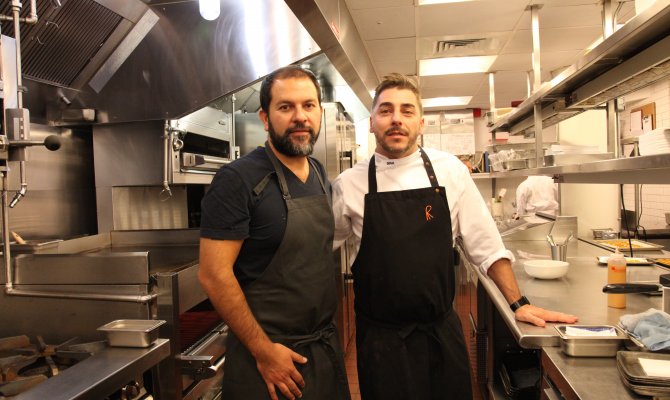 The Mexican chef's US tour began last Monday at the 92nd Street Y in Manhattan, where Enrique was in conversation with Kate Krader, restaurant editor for Food & Wine magazine. The following Thursday he teamed up with Jordi Roca – one of the three brothers responsible for El Celler de Can Roca, number one on the World's 50 Best Restaurants list – to prepare a dinner at Enrique’s Cosme restaurant, as part of the New York City Food & Wine Festival. Enrique cooked crab tostada and mushroom tamale, among other dishes, while Jordi – Can Roca’s pastry chef – served up peaches with roses, as well as ice cream flavoured with vanilla pods sourced the Veracruz region of Mexico.

On Friday, Olvera celebrated his New York restaurant Cosme’s first birthday at an off-site party in a swanky private residence in Manhattan, replete with an indoor pool and a series of Keith Haring paintings.

The following day, the chef signed books at the Union Square greenmarket, where he ran into his old friend Alice Waters; Waters and Olvera are collaborating on a series of kitchen gardens for Mexican schools, and both are aware of the social and cultural importance of food in our lives. As Waters told Vogue earlier this year, “Enrique gets it. He’s a celebrity chef, and he knows he has ways, through food, of saving his culture.” 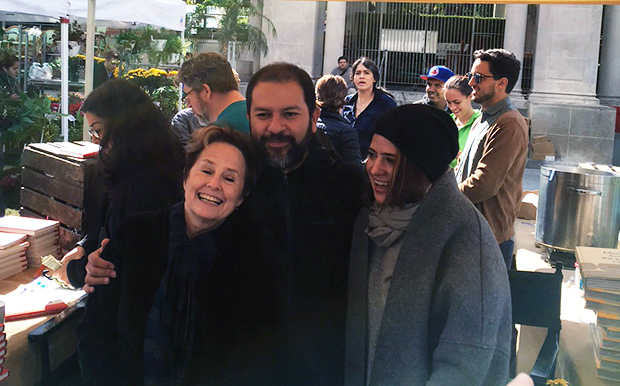 Meanwhile, over the West Coast on Sunday evening Enrique and his chef de cuisine, Daniela Soto-Innes, prepared tacos with chef Trey Forshee at his Galaxy Taco restaurant in San Diego. Enrique prepared lamb barbacoa tacos among other dishes, while Trey's team laid on the churros. 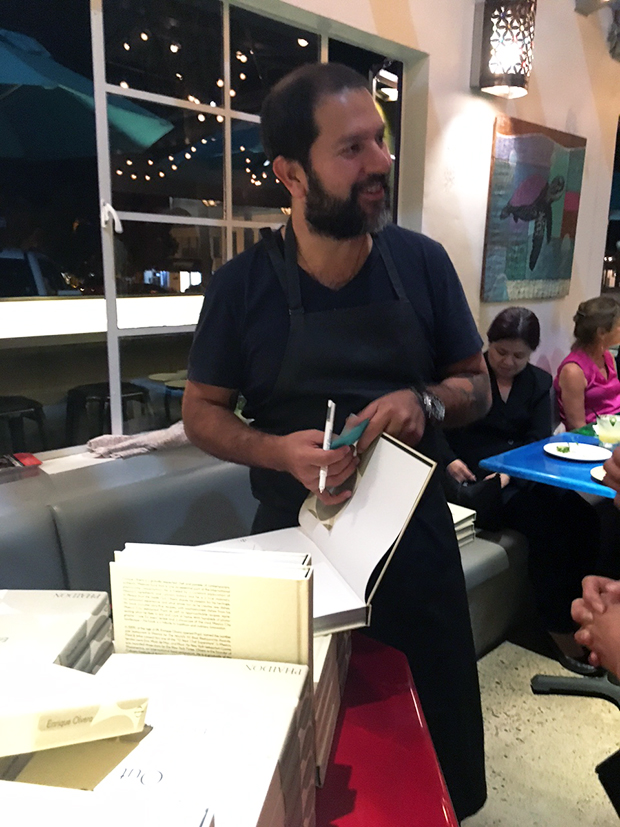 This morning Enrique has flown on to Los Angeles to film footage for the Spanish-language network Univision. Tomorrow he will be interviewed for the Los Angeles NPR affiliate, KCRW's show Good Food and then it’s up to San Francisco, for an engagement at Bar Agricole, before going on to Minneapolis, where Enrique will have a book signing, followed by a ticketed dinner at Cooks of Crocus Hill. The following day Enrique will be a guest on the 20th anniversary live recording of Splendid Table, a radio show aired on 485 stations around the country. The event will take place at the Fitzgerald Theater in St Paul, Minnesota, before an audience of around 900.

To find out more about Enrique’s tour go here; and for more recipes and culinary insight from a chef who truly goes from farm to table, get a copy of his book Mexico from the Inside Out here.