Mugaritz is a geographically specific restaurant. As John Lanchester writes in the introduction to our book, Andoni Luiz Aduriz took the name for his Michelin-starred restaurant from the Basque words for a border oak, 'muga' 'ritz'.

Indeed, "it doesn't refer to border oaks in general, but to one specific tree, between Astigarraga and Errenteria in the hills inland from San Sebastian in Spain," explains Lanchester. "When you go to Mugaritz you realize that it isn't named after an oak tree, it's named after that oak tree, that one right there."

Still, the restaurant's motto is "culinary creativity and innovation", and so we shouldn't be surprised to learn that Aduriz is willing to share the aromas of his restaurant with would-be diners thousands of miles away.

Now, thanks to the wonders of digital technology, gourmands can waft in the smells of Mugaritz far away from the tree's spreading branches. A few days ago at the Madrid Fusion exposition in the Spanish capital, Aduriz and City University London's Professor Adrian Cheok, unveiled Scentee, a new phone app and device that, once attached to the device, will permit the user to virtually prepare a recipe from the restaurant; the aroma from the finished dish is then released from the phone.

"The Digital Food app opens up new vistas for people around the world who may not have had the opportunity to physically dine in the restaurant to virtually experience the real smell of gourmet food prepared by one of the world's top restaurants and chefs," explains Prof Cheok. "The revolutionary new device brings the sense of smell to mobile phone communications." 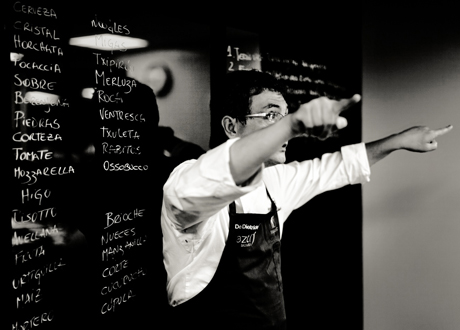 The Scentee device retails for $34.99, or about £20, while its cartridges cost $4.99, or about £3 each, and the app is free; all of which makes it cheaper than a meal at the restaurant itself, though hardly as satisfying.

Find out more about this here, and to better understand this Basque institution, pick up a copy of its great looking, if not great smelling book, here.