How can a used plastic chair command a high estimate of £200,000? It’s a question that probably won’t be on the minds of bidders at Sotheby’s auction house in London tomorrow afternoon, when a rare example of Shiro Kuramata’s Miss Blanche chair goes up for auction. Indeed, if any of the paddle bearers in the room managed to get this piece for under £200,000 ($308,000), they would be bagging quite a bargain.

The rare piece of furniture by the late, great Japanese designer might be made from lowly materials, yet its tricksy design, short production run, and beautiful conception, makes it one of the most sought-after designs of the late 20th century.

As we explain in our Kuramata monograph, the initial inspiration for this work came in 1988, when the designer went to see the 1951 film A_ Streetcar Named Desire_. The chair takes its title from Vivienne Leigh’s character, Miss Blanche DuBois, though the link between the chair and Leigh's role is not clear. “It is sometimes said that the idea of embedding artificial red roses into blocks of transparent acrylic was inspired by the floral corsages worn by Leigh in the film, however this may be an overly romantic assumption. Regarding this, Kuramata said in 1989, “I do not know why I stuck to roses. All I can say is that the flowers must be roses, and they must be artificial flowers, not natural ones.” 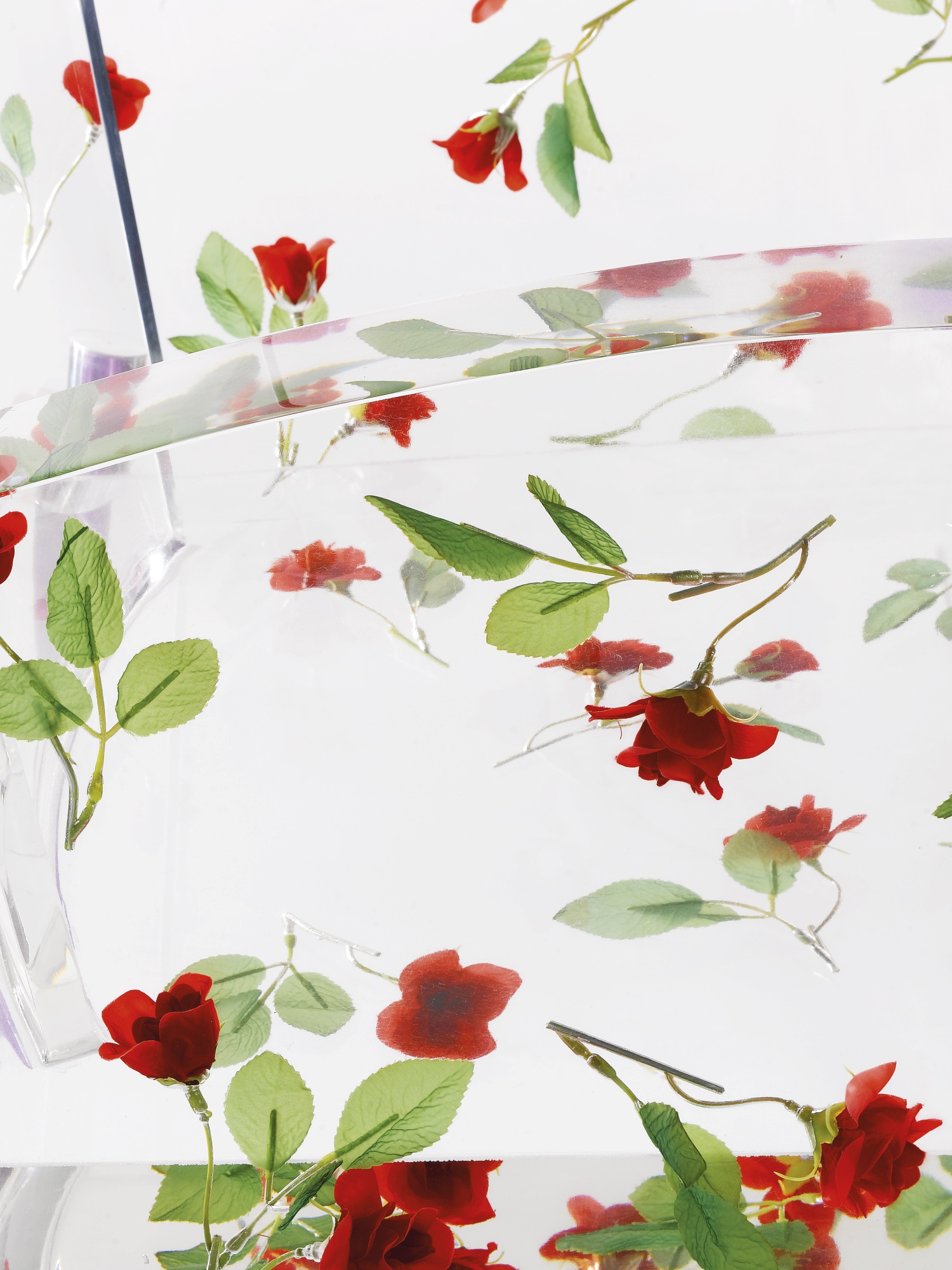 Author Deyan Sudjic sheds a little more light on Kuramata’s creative process. “Blanche DuBois' most famous line in Tennessee Williams’s play A Street Car Named Desire is delivered as she is taken into the care of a psychiatric unit, “I have always depended on the comfort of strangers." While Kuramata never talked in much detail about his reasons for naming the chair after such a damaged character, there is something deeply resonant about the idea of a faded beauty ravaged by poverty madness and decline, which seems to reflect certain ideas about material qualities that Kuramata learned from the [20th century Japanese art movement] Gutai group, and the beauty that is found in decay. 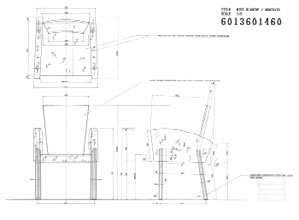 Plans for Miss Blanche by Shiro Kuramata. As reproduced in our monograph

“The chair seems so effortless, the product of almost nothing. There is no structure, no elaborate fixing. The anodized tubular aluminium legs are screwed into a socket in the acrylic, in the way that had originally been devised for the acrylic pieces that Kuramata was working on in 1960. But of course it is exactly the kind of effortlessness that was so demanding to achieve, that many of the craftsman who made it were reluctant ever to work with Kuramata again. 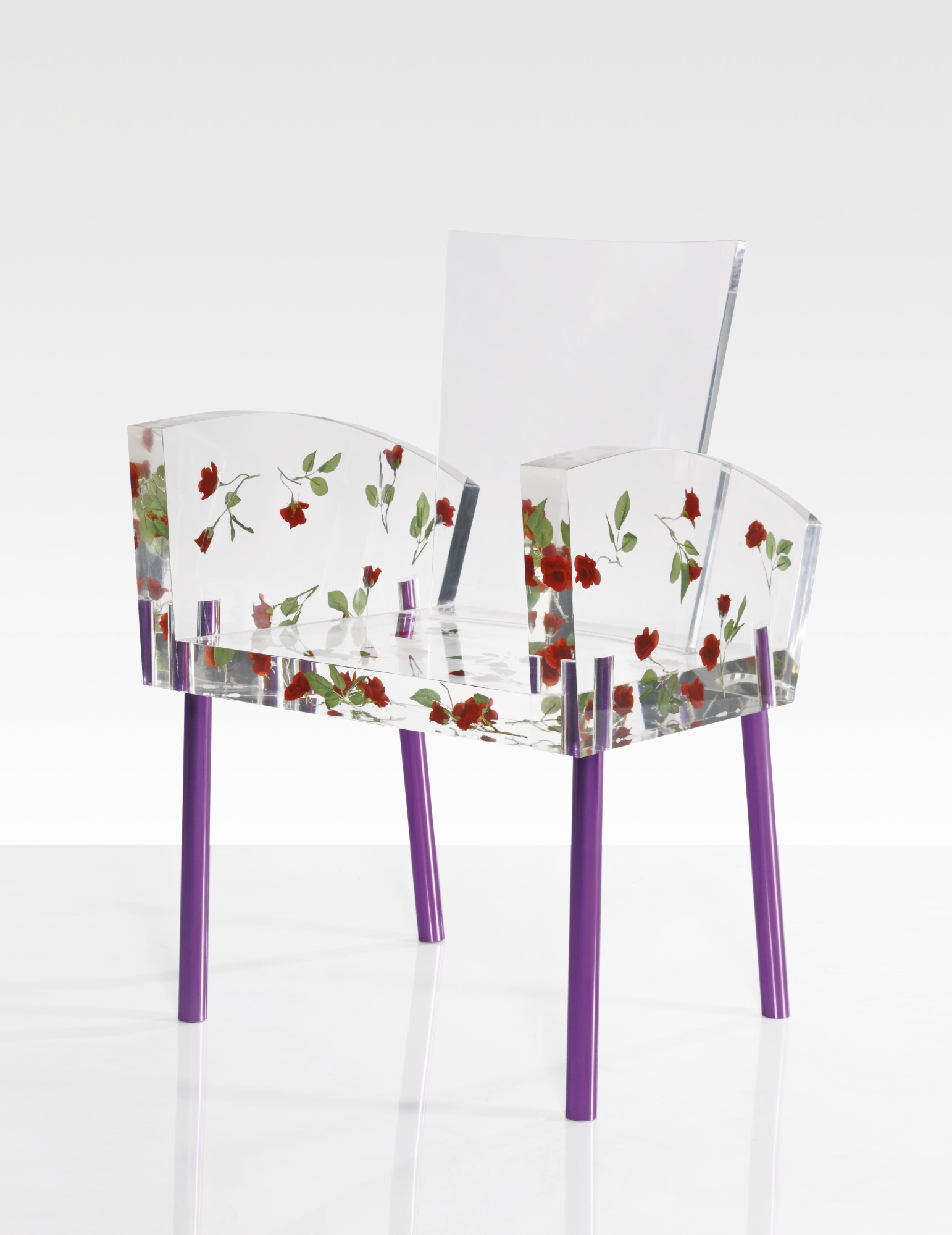 “The main material for a Miss Blanche chair is acrylic resin, which comes in eighteen-litre (four gallon) drums in liquid form.  [Kuramata’s fabricator] Ishimaru’s team made a mould to transform the liquid into a usable sheet material. The mould was made from galvanized sheet steel that could only be used once. Liquid acrylic is like water, and needs the addition of just the right amount of hardening agent, a procedure that requires considerable skill. If there is too much of the hardener, the acrylic goes opaque as it solidifies. But with such small quantities of the agent, hardening is a lengthy process. Working by trial and error, the team hit on a method of pouring acrylic to half the depth of the mould, putting in the flowers, waiting eight hours for the acrylic to go hard, then pouring in the rest to the top of the mould, and waiting another eight hours. 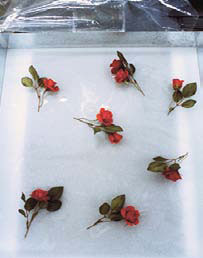 Archival photographs of the fabrication process for Miss Blanche. As reproduced in our monograph

“The precise thickness of the acrylic sheet was an aesthetic decision. It was arrived at not by structural calculations about its strength but by eye. In the early stages of the moulding, the roses needed to be held in position with tweezers until the resin hardened sufficiently to ensure that they did not sink to the bottom of the mould, and protrude from the surface of the acrylic. A lot of care was taken to ensure that the flowers were spread throughout the mould, and that they made a good pattern. Allegedly, the procedure was interrupted at regular intervals by Kuramata telephoning to check on progress. 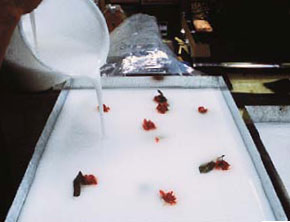 Archival photographs of the fabrication process for Miss Blanche. As reproduced in our monograph

"Once the acrylic was successfully removed from the mould, the seat and two arms were cut from the sheet using a pattern and glued together, with a lighter curved acrylic sheet used for the back. Finally, two coloured tubular aluminium legs were screwed into the base of each arm. The first batch of rose-studded acrylic sheets yielded just eight usable chairs, with one failure. According to Christie’s, Ishimaru has produced a total of fifty-six Miss Blanche chairs over the years: the precise number reflecting Kuramata’s age at the time of his death.

"According to Ishimaru, Kuramata’s first thought was to try to use real roses for the chair. "We tried it as an experiment, but the acrylic just burned fresh flowers, and turned them black," remembers Ishimaru. "So then we experimented with the most expensive artificial flowers that we could find, because we thought that would give us the best-looking, best-quality result. But that did not work very well either. For the expensive kind of artificial flowers they use dye that is too good. It tended to bleed into the acrylic and leave a permanent stain. Finally we tried using much cheaper artificial flowers, and that worked a lot better."

Proof that the obsessive mind set that Kuramata shared with Miss Blanche’s fictional namesake, can at times lead to spectacular results. If you are bidding in tomorrow's auction we would like to wish you good luck. For greater insight into this important 20th century designer, buy a copy of our two-volume Shiro Kuramata monograph, which comes, quite appropriately, with in a clear, plastic slip case.

More on From Book to Bid - Shiro Kuramata’s Miss Blanche