Can't always hit your targets at work? Consider the kids who study under this strict, reward-based system. . .

For many of us, the end of our school days also signals the end of report-card tyranny and a chance to spread our wings. However, in the Democratic People’s Republic of Korea (a.k.a. North Korea), they do things a little differently. 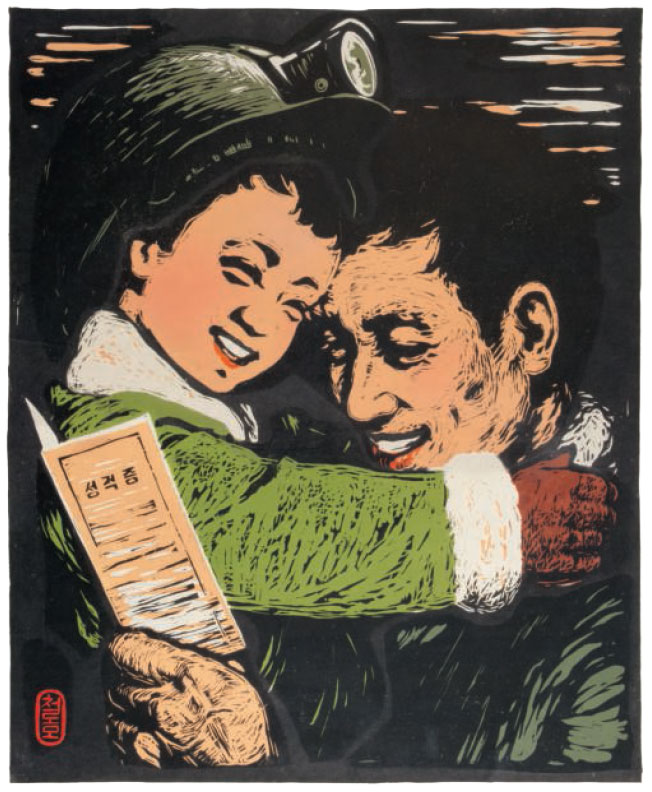 “North Korean schoolchildren are given report cards to take home to show their parents,” explains Nicholas Bonner in his new book, Printed in North Korea: The Art of Everyday Life in the DPRK. “Schools in the DPRK also display boards ranking the students, from top to bottom for the whole school.

But the ranking doesn’t end with academic achievement. The same system will apply throughout their lives, regardless of profession. In the mines, each work team will be judged against the others in their output, with the winners receiving prizes and accolades in the newspaper and those that fail having to account for their shortcomings.” 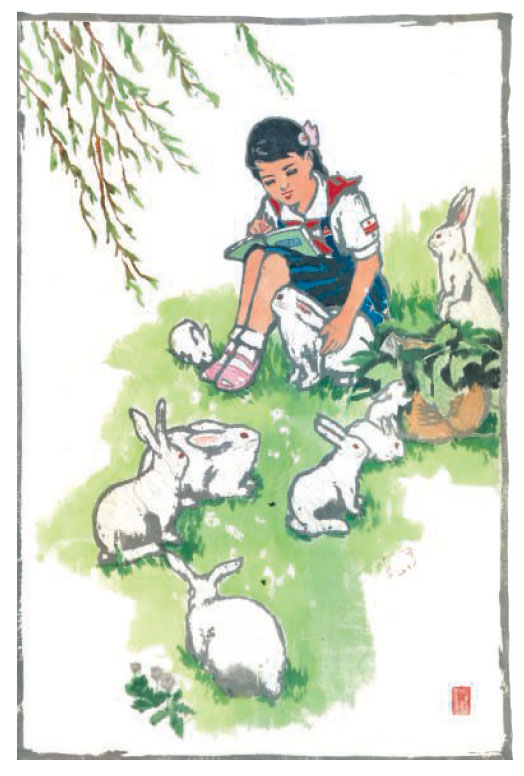 In the caption for Rabbits, a print by Korean artist Chol Su, Bonner explains that “the ranking of two stripes and one star (as seen on the girl’s school uniform) is given to just three students per class – the ‘Class Monitor’, the ‘Socialism Moral Monitor’ and the ‘Physical Training and Hygiene Monitor’. Here, the Socialism Moral Monitor is taking care of the rabbits, serving as a model to other students to love every plant and animal in the country.” 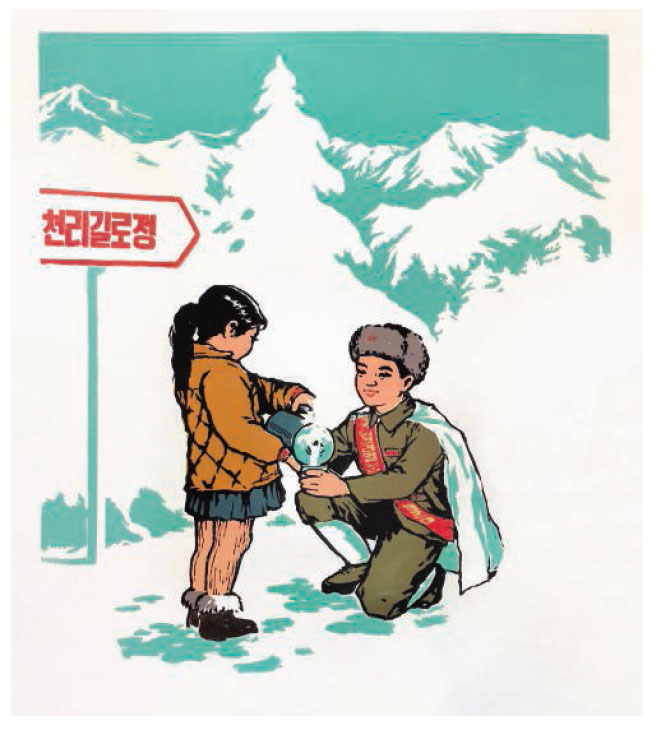 During the Exploration March by Ko Yong Chol, 1984

The country’s military and governmental character shows up in the children's school trips too. “North Korean history relates the story of [North Korea’s first leader] Kim Il Sung, age nine, following his parents to the northern Chinese region of Musong,” explains the author. “When he was twelve, they sent him back to Korea alone, on foot. He stayed with local peasants and lived off the land so he could learn Korean customs, culture and language. It has since become part of the ideological education of children to undertake the ‘One Thousand-ri Journey for Learning’ pilgrimage. Today they travel partly by bus and stay in hostels, but it gives them a sense of distance and allows them to relate to the lives of the Leaders.” 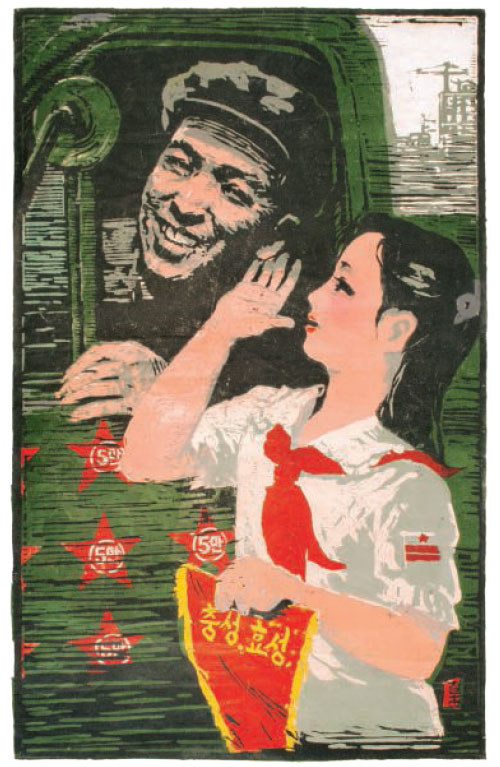 Children’s presence in North Korean prints also tell us something about adult achievements and ambitions. “A student cheers on a driver who holds the record for driving safely for more than 50,000 kilometres, as evidenced by the red stars on his truck,” says the author in a caption for another untitled print by Chol Su. “It is mandatory for all third grade primary students to join the Schoolchildren’s Union. Upon joining they receive a red bandana which can be seen here worn around the neck.” 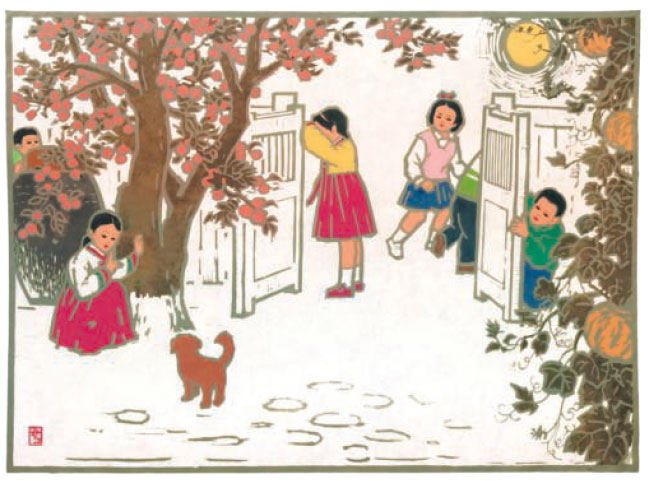 Thankfully, there are some areas of childhood that the state can’t reach. In a caption for images of children at play, Bonner writes that “these three prints depict children playing games such as hide-and-seek, Jegichagi and piggy-back fighting. Artworks such as these images, as well as images of dogs and cats and landscapes, will often be hung in North Korean homes. Each room (apart from the bathroom and kitchen) will display portraits of the Leaders, but pure propaganda images are not part of home life in DPRK.” 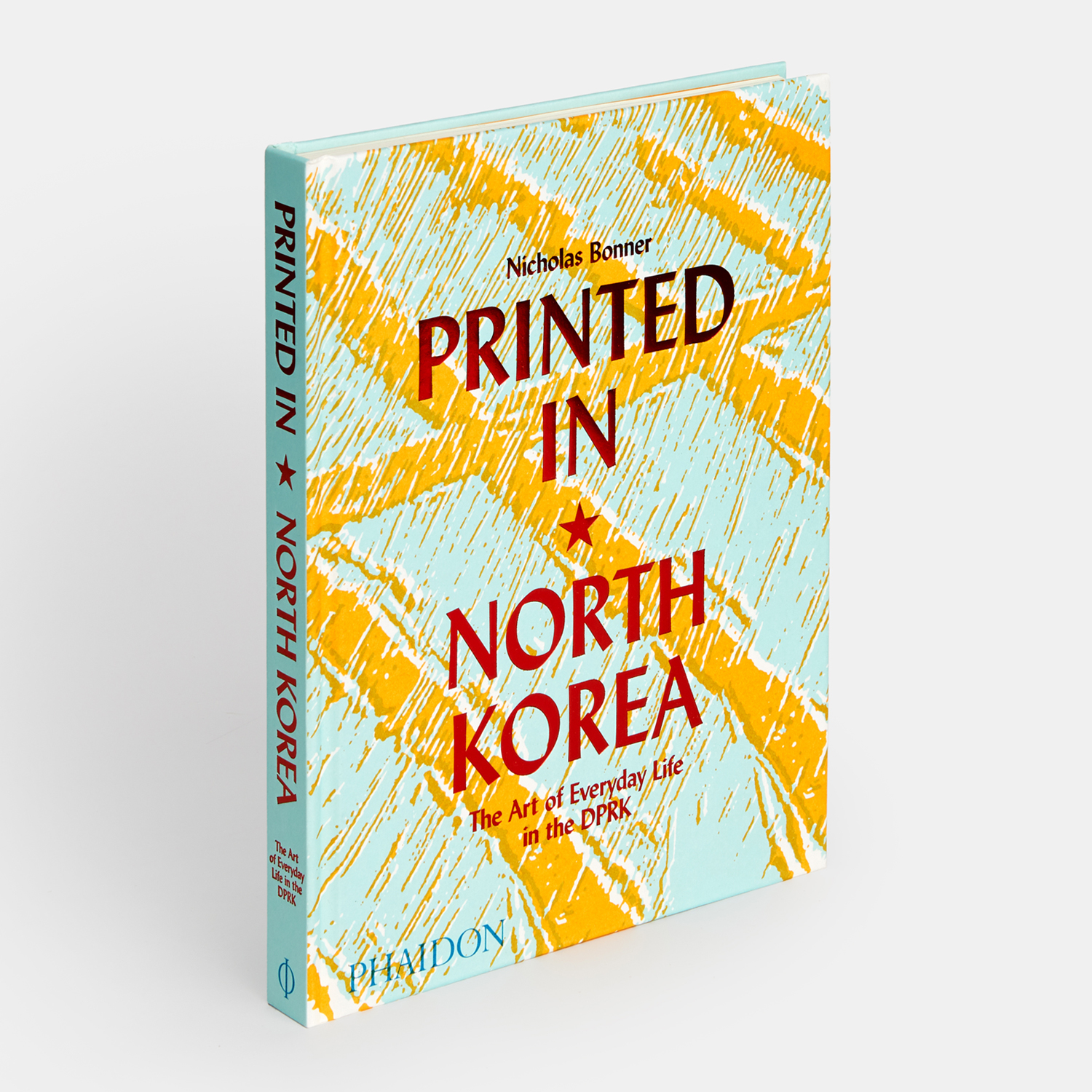 To see much more by these artists buy a copy of Printed in North Korea here. This incredible collection of prints dating from the 1950s to the curent day is the only one of its kind in, or outside, North Korea.

Depicting the everyday lives of the country's train conductors, steelworkers, weavers, farmers, scientists, and fishermen, these unique lino-cut and woodblock prints are a fascinating way to explore the culture of this still virtually unknown country. Together, they are an unparalleled testament to the talent of North Korea's artists and the unique social, cultural, and political conditions in which they work.

More on Childhood in North Korea is a little bit different. . . 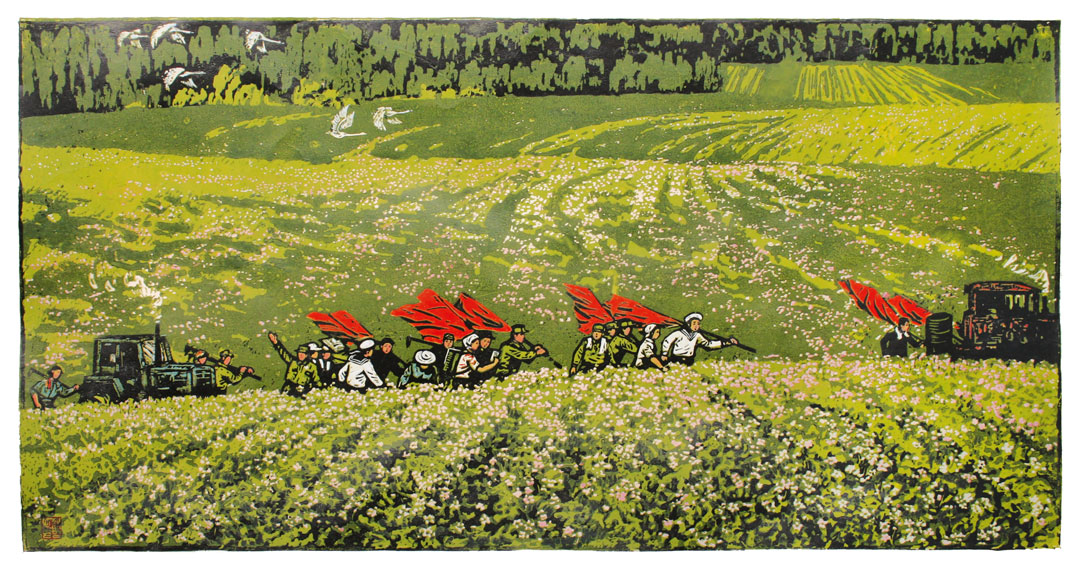 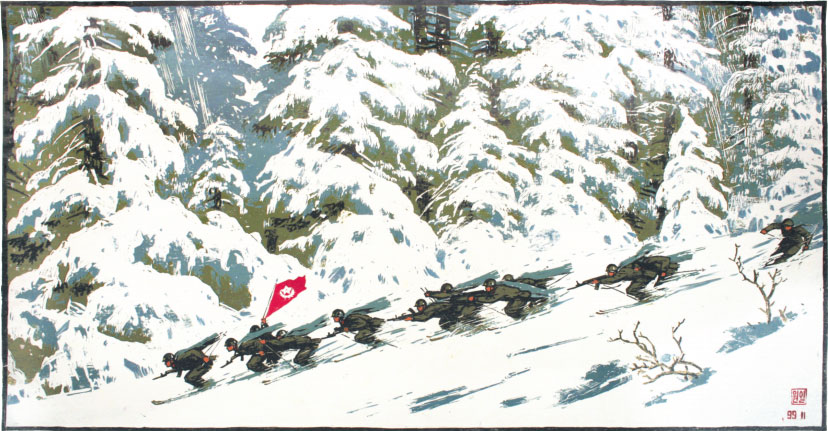 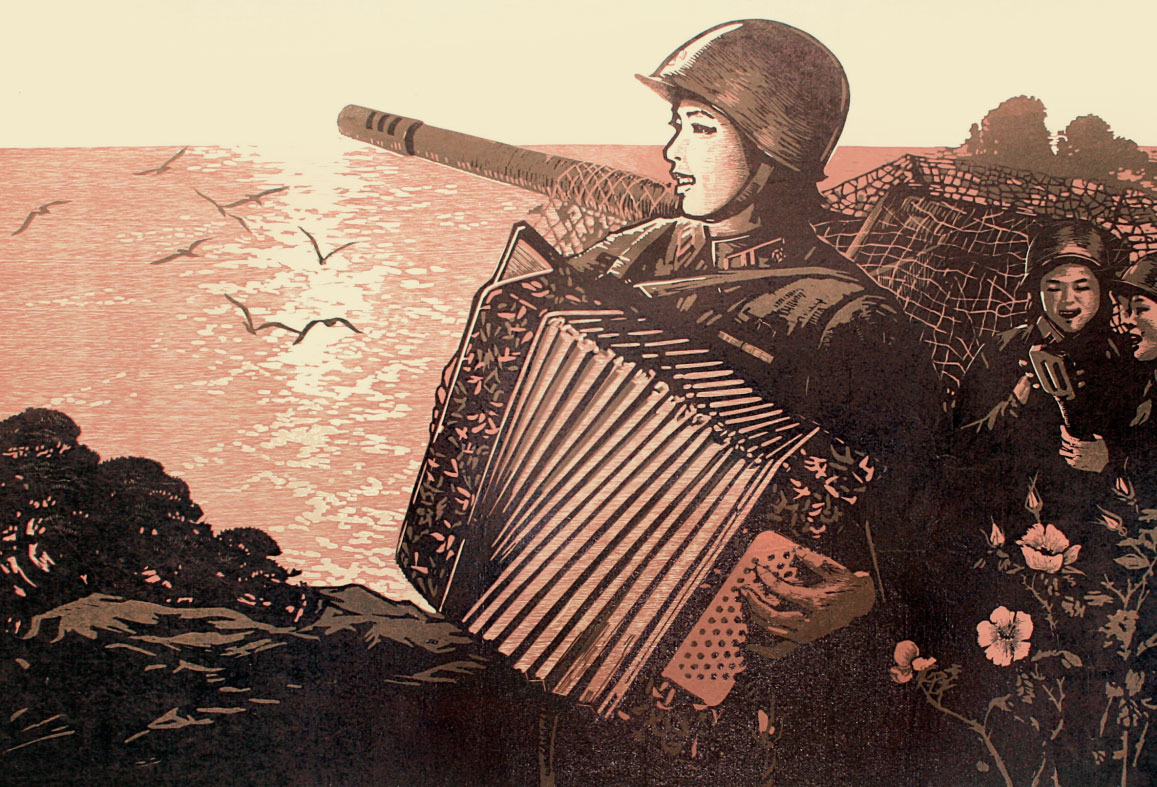 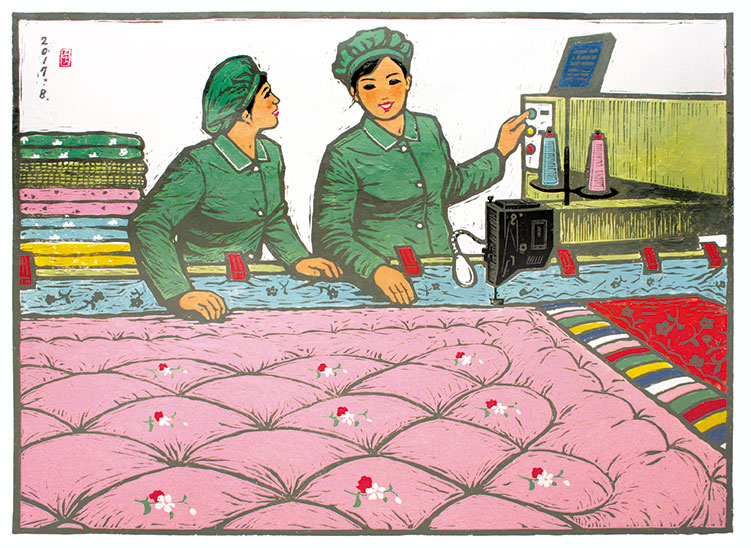 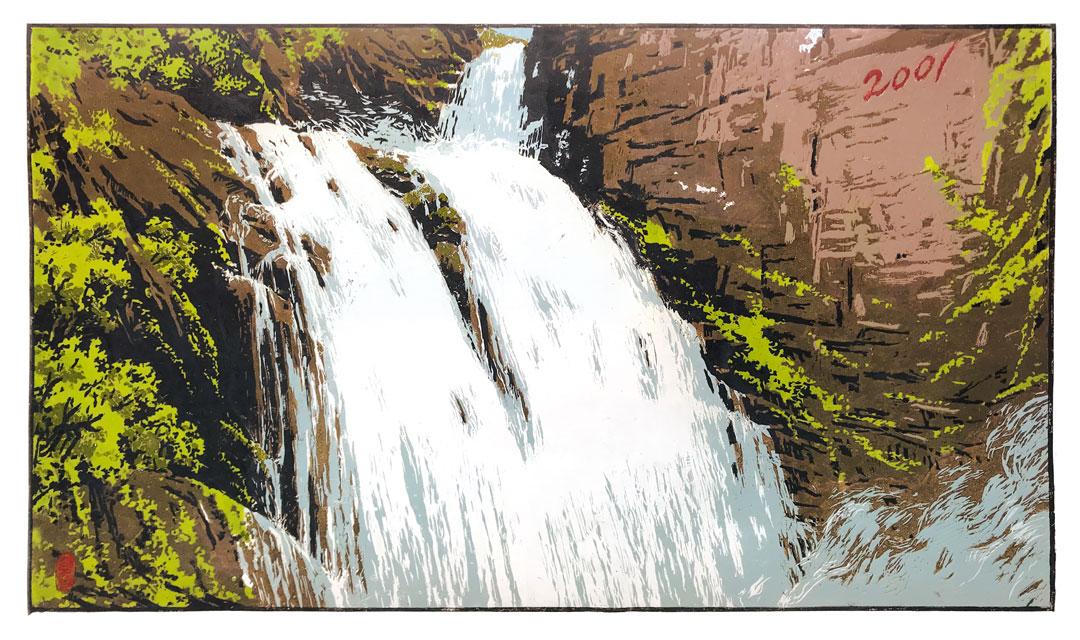 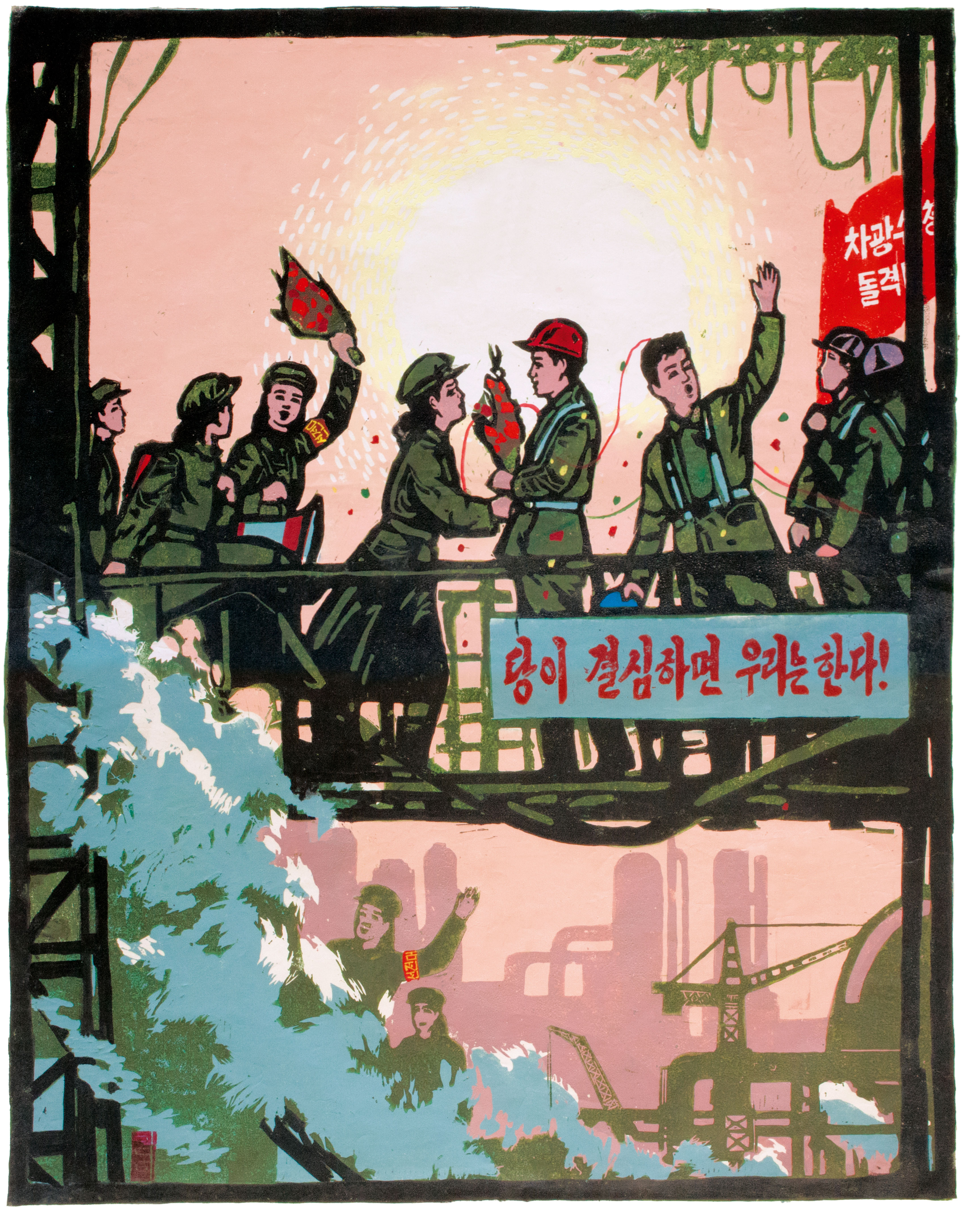 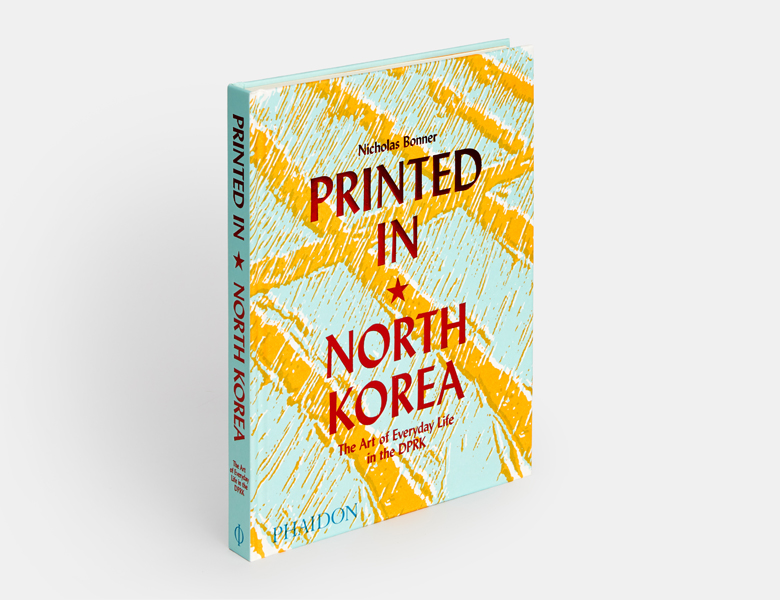