If you’re lucky enough to be attending or even bidding in the upcoming Sotheby’s, Christie’s and Phillips auctions in New York and London in the next couple of weeks we wish you good luck. We also thought you might appreciate some back stories to the art on offer, courtesy of the wonderful writing in our catalogue of contemporary and modern art books.

Were going to kick off our From Book to Bid mini-series with a look at Cindy Sherman’s Untitled #470 which is up for auction at Phillips evening sale in New York on May 14. It’s expected to fetch between $300,00 and $500,000. This chromogenic print is signed, numbered and dated “Cindy Sherman 3/6/ 2008 on the reverse and is number 3 from an edition of 6. Another work from the edition is in the collection of the Moderna Museet, Stockholm

As an artist Sherman has made her art from exposing deception and engaging with its strategies – casting a keen eye on the foibles of Vanity Fair.  In that respect, her series of society women images are about the failure to deceive and the compulsion to do so.

Here’s Paul Moorhouse, curator of 20th century portraits at the London National Portrait Gallery and author of our fine Cindy Sherman Focus book, to explain a little more on the series and the print up for auction at Phillips. 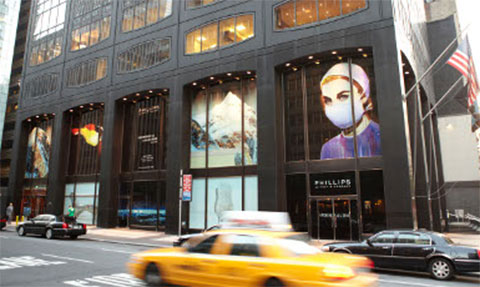 “As in headshots (2000), the mature women portrayed by Sherman are witnessed confronting the issue of their age. Whereas the actresses seem defeated by the impossibility of regaining and projecting a lost sexuality, these society hostesses have adopted a different strategy. Rather than attempting an air of youthful attractiveness, they are preoccupied with their own status and sophistication as the means of preserving personal and social credibility."

"The wives of powerful men - financiers, politicians and lawyers - they must cut a figure in a pressured world of competitive public achievement. Sherman's characters explore the intricate repertoire of devices developed to serve that end. Pictured against backdrops that strain to convey an effect of history and substance, her women pose for the camera in attitudes that strike a note of imperious, self-conscious importance. However, the ambience they have fabricated and inhabit is, like the backdrops Sherman employs, strangely empty.

Despite their strenuous efforts at poise, affluence and confidence, like the red-lipsticked, red-eyed lady in Untitled #470, these forceful women are betrayed by neurosis, chilling self-absorption and a mask-like veneer of charm. Even the way the portraits are framed strikes a false note. Ornate, intricate and patterned their elegance is, nevertheless, ersatz."

The unspoken tension beneath the surface of these portraits, and their compelling engagement with the dilemma of ageing, relates to a universal predicament.  From this all too human plight Sherman makes art that exposes human folly but also identifies a kind of desperation that that is both repugnant and unforgivable.

If you’re bidding on the piece we wish you bon chance! If you’d like to learn more about Cindy Sherman check out Paul Moorhouse’s book and if you’d like to hang an edition on your wall take a look at Sherman’s section on Artspace.

More on From Book to Bid – Cindy Sherman's Untitled #470