Where to Eat Pizza at Frieze NY

When you’ve worn the aisles of Frieze thin it’s time to replenish those lost reserves with some high carb loading. Where To Eat Pizza author Daniel Young tells you where to go for an artisan slice or two in New York's artier neighbourhoods. 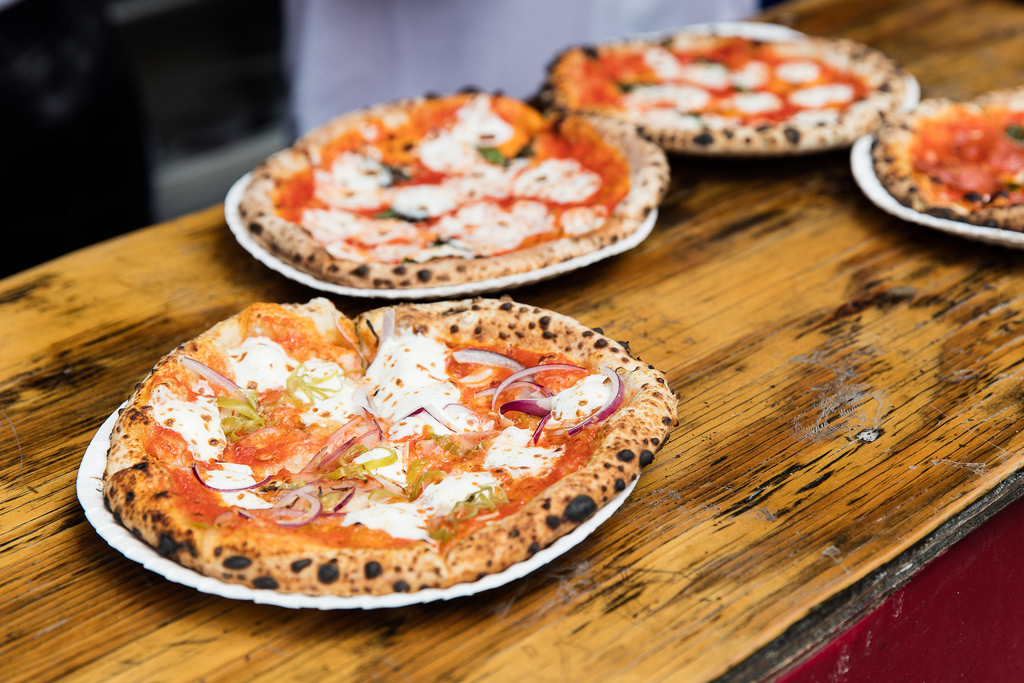 The utter excitement of finding something new, edgy, and special in the grimmest outreaches of the city is a part of every Bohemian counterculture. What’s unique about Roberta’s rise, as compared to other hipster breakthroughs, is that its fame came not from painting, poetry, or punk rock but from pizza. The singed markings of Neapolitan inspiration show on the every bubbly, leopard-spotted pie.

Indeed, if you're at the fair you can also enjoy Roberta's slices; try their Frieze restaurant beside pavilion entrance between stands A23 and A24. And that's not the only pop-up place you can pick up a Roberta's slice this week. The restaurant is also taking part in Mad Square Eats food market, in Manhattan's Flatiron District until 27 May.

If it were an art movement: Fauvism. Just look at those wild, leopard-spotted pie tops

Site Specific: Look out for ever changing street art pieces by local crew the Bushwick Collective, via their Instagram account @thebushwickcollective 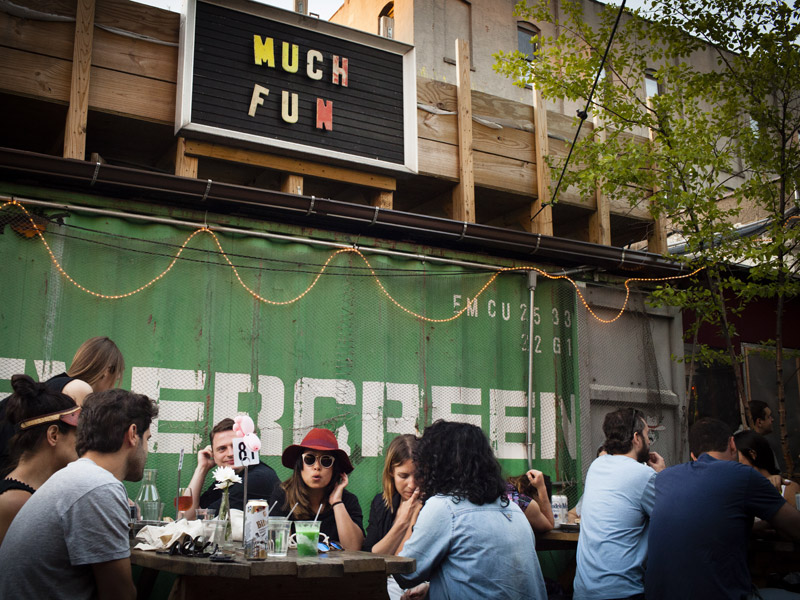 Frank Morano, the owner of this incomparable slice joint, hates it when a customer blots one of his Soho Squares, as his Sicilian pizza is called, with a napkin. ‘That’s not grease’, he protests, ‘it’s olive oil!’ The crime, if there’s one, is in wanting to remove the good grease filling up the curled cups of pepperoni atop the Spicy Spring pizza.

If it were an art movement: Cubism, given Prince Street’s chunky, geometric slices

Site Specific: SoHo was still an artists’ colony when Francoise Schein’s LED and metal Submay Map Floating On A NY Sidewalk was installed between Spring and Prince back in the mid Eighties. The artists are gone the art’s still there 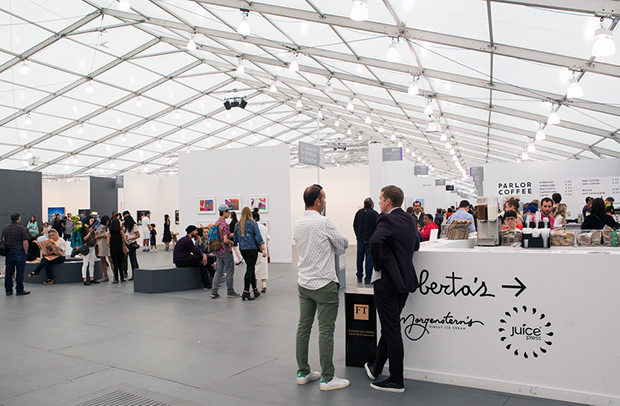 In 1905 Neapolitan immigrant Gennaro Lombardi opened the first licensed pizza shop in what is now known as NoLiTa. The address has changed but not the old-school devotion to classic New York Neapolitan pies crisped and charred, just as Gennaro did, in a coal-fired brick oven.

If it were an art movement: Straight from the motherland? It’s Italian Renaissance

Site Specific: If you’re getting a takeout, eat it on your way to the East Village where you’ll find Tony Rosenthal’s massive steel cube Alamo. Work off those calories by giving it a spin

James Beard Award winner Jim Lahey of Sullivan Street Bakery is a pioneer among artisan bread bakers pursuing a passion for pizza. In 2009 he opened Co and there’s been a wait for prime-time seats and rustic, hand-crafted pizzas at its communal tables ever since. Insiders pressed for time, or money, know they can pop into the bakery just up the avenue for an airy slice of pizza rossa.

If it were an art movement: Pattern and Decoration, thanks to the fine, vernacular hand-finished flourishes 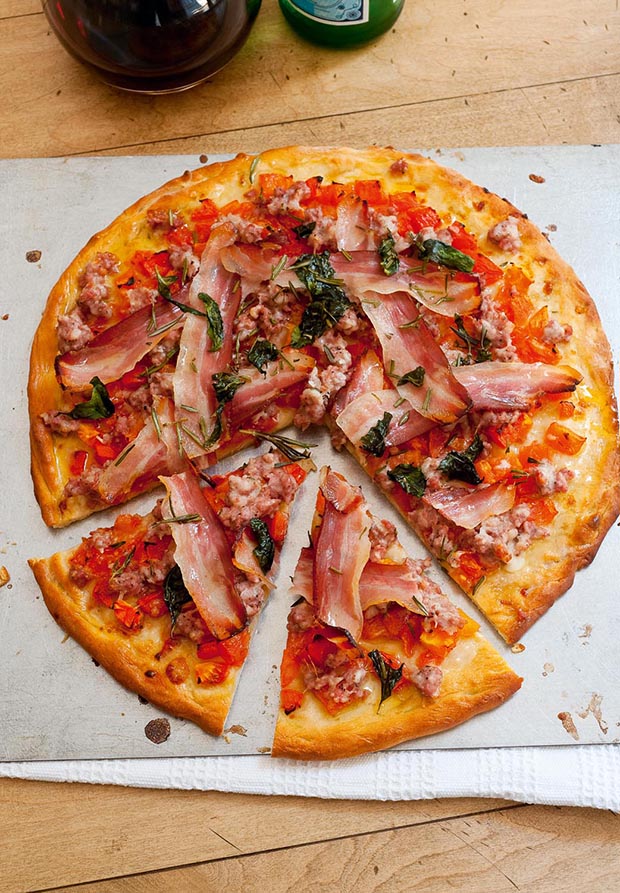 Everyone knows about Mission for fiery Chinese food but few are aware it moonlights in pizza made with a San Francisco sourdough starter and Italian DOP tomatoes by a Filipina chef working for Korean-born orphan raised in Oklahoma. Only in America.

If it were an art movement: Skewed authorship? Shifting meanings? This has to be Postmodernism!

Site Specific: The plaza at the base of the nearby Chase building is home to two monumental works: Isamu Noguchi’s Sunken Garden and Jean Dubuffet’s Four Trees.

A “routine” New York neighborhood pizzeria-restaurant – exactly the kind most areas of most cities in most parts of the world would kill for. Hits the spot for eat-in, eat-later or, better still, eat-now, for groups of between 1 and 12.

If it were an art movement: Social Practice. This is a for-the-people, by-the-people place.

Site Specific: Alexander Calder’s only terrazzo piece – black and white tiles arranged in zig zags and swirls can be found on the sidewalk of 1014-1018 Madison Avenue nearby 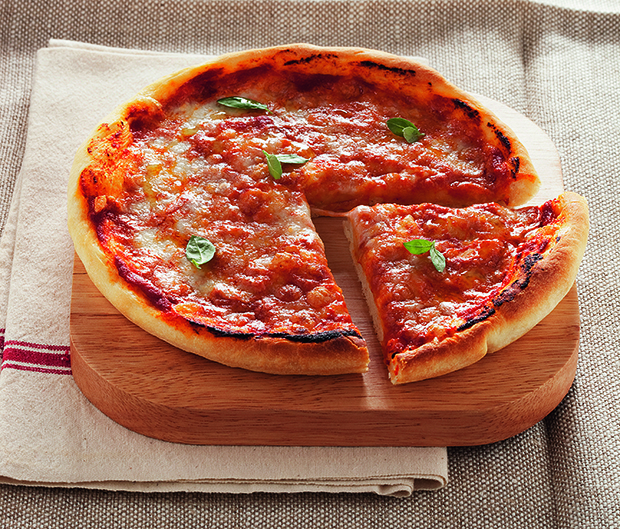 A gallery for paper plates displaying the menus, customer drawings and, best of Best, gorgeous slices of pizza blistered in a wood-fired oven. The selection of classic New York pizzeria toppings is millenialized with pickled veg and kale.

If it were an art movement:   With the rough-hewn plate drawings, it has to be Art Brut

Site Specific: Jeppe Hein’s fun, tactile sculptures in Brooklyn Bridge Park, entitled Please Touch the Art, might be a few blocks away, but they’re worth the walk.

For more great pizza places, in New York City and the rest of the world, order a copy of Where to Eat Pizza, here.

Where to Eat Pizza: Daniel Young