Gerrit Rietveld was one of The Netherlands’ most important 20th century furniture designers and architects, and a key early member of the country’s De Stijl modernist movement. So what joy that one of his key pieces is now being reissued.

The stunning 1963 Steltman Chair was originally commissioned by Steltman jewelers in The Hague, as seating for betrothed couples perusing wedding rings. In fact only two were made, and the surviving one – now in Amsterdam’s Rijksmuseum - was used as the basis for this limited edition.

Rietveld’s symmetrical chairs are each made up of three right-angled elements that seemingly stand on top of or against each other. 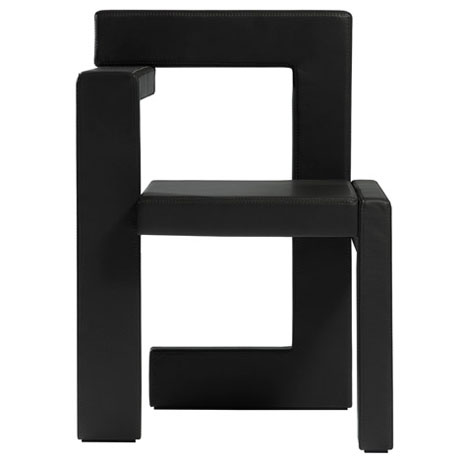 Exactly 50 years after Rietveld’s death, 50 right-facing chairs in dark grey leather and 50 left-facing in white leather – the material used for the original pair – have been made, each costing €3,745.

For anyone thinking of starting their own Rietveld collection, it’s worth knowing that Rietveld Originals plans to release more from the archive this year, to sit alongside those other classics, the 1918 Red-Blue Chair, and his experimental 1930s ZigZag Chair. 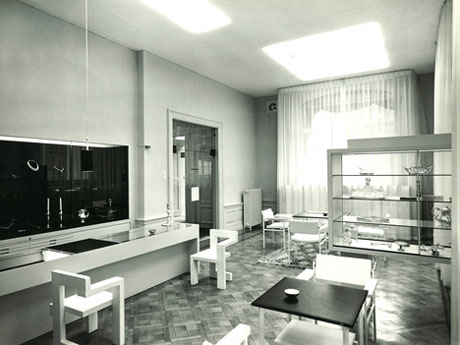 Steltman Chairs in the Steltman jewelers in the Hague - Gerrit Rietveld

Despite the Steltman Chair being such a stayer, much of Rietveld’s other work for the jeweler was short-lived. He was originally commissioned to refurbish the whole chain of shops. However, it soon became clear that Rietveld’s austere design was too modern for Steltman’s conservative clientele and most of the design elements were removed a few years later. We have a fantastic book on Gerrit Rietveld in the store. Richly illustrated with photographs, drawings, paintings and archival materials it shows every period of Rietveld’s work and life, including many previously unpublished images.

It was written by Ida van Zijl, curator in applied arts and design at Centraal Museum in Utrecht, the holder of the main collection of Rietveld's work. Since the late 1970s, she has studied Rietveld and has complete access not only to the museum's collection of documents, but also to those held by his family and friends. You can also see a number of his products in our compact bible of all things stylish The Design Book.