He was one of the 20th century’s foremost modernist designers and architects, yet peculiarly, Gerrit Thomas Rietveld’s work hasn’t been shown by a gallery since 1988.

Now, however, a trip to Antwerp reveals Rietveld in all his De Stijl abstraction and strong vertical lines. For two of his compatriots, Job Smeets and Nynke Tynagel of Studio Job, have amassed some his better and lesser known pieces for their exhibition, Gerrit Thomas Rietveld.

Of the former, there’s the iconic 1917 Red Blue Chair, which they’re borrowing from legendary graphic artist Wim Crouwel; and a pair of acutely angled Swaan Chairs, courtesy of the Centraal Musem in Utrecht. Of course Rietveld was an architect as well as a designer. Obviously his 1924 masterpiece, the Schröder House, won’t make it into the exhibition, through there are architectural models on show. 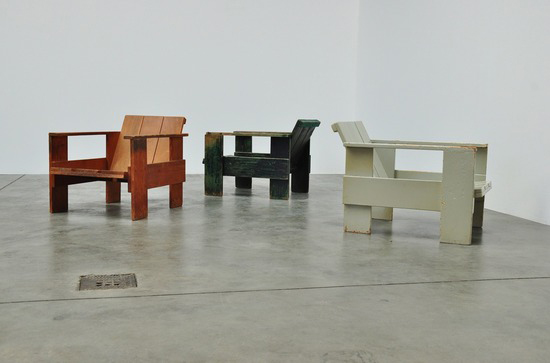 The Studio Job connection might seem unlikely, as the designers are known for their love of decoration. But for them, delving into the Rietveld archive was like a journey of discovery. Smeets says of the great master, who died in 1964: “Rietveld is like bread and butter. However, the first time I was consciously intrigued by Rietveld was when I discovered that underneath his strict socialistic values (which I find scary), laid a highly expressive mind that reflected the zeitgeist in a genius way. Rietveld invented abstraction in design as Picasso invented it in art.” 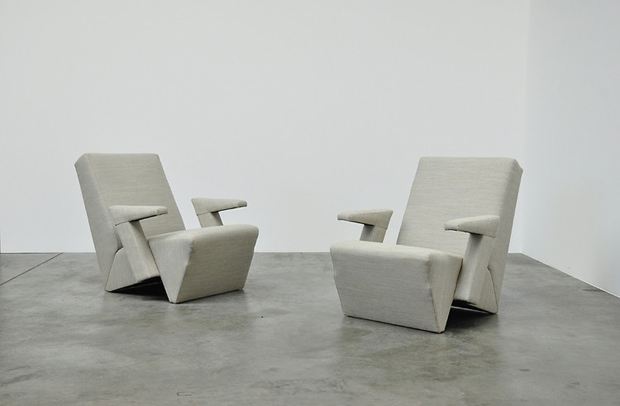 Wim Crouwel bought his red-and-blue chair straight from the master in 1955. The pair say they were "struck by the personal nature of the event, which creates an almost palpable contact with Rietveld" and cite it as the inspiration for the exhibition.

"Luckily we persuaded Wim to exhibit ‘his’ chair on an extra high pedestal at Studio Job Gallery," says Job Smeets. " The red-and-blue chair is undoubtedly the most iconic object that Rietveld ever designed – and in my opinion Crouwel’s is one of the best-preserved specimens." The exhibition at Studio Job Gallery opened this week and runs until 11 January 2013. As we said in our introduction, we're mystified that Rietveld hasn't had a gallery show for so long. Luckily, we have our own Rietveld retrospective - check it out.