A manuscript by forger Eric Hebborn calls for greater expertise. But is he laughing at us from beyond the grave?

Eric Hebborn was one of the world’s greatest art forgers. “In my book I examined more than 60, and of all of them, Eric is the only one I think was at the level of the artists he forged,” says Noah Charney, art expert and author of the Art of Forgery. “And yes, I am including van Dyck and Titian.”

Hebborn, a British artist and crook who characterized himself as “an old master at the wrong time,” studied at the Royal Academy of Arts in London during the late 1950s, and displayed a great talent for drawing. However, he was unable to find success within the gallery system, and went on to specialise in producing and selling drawings that appeared to be preparatory sketches for better-known sculptures or paintings. So, what should we make of a newly uncovered manuscript by Hebborn, damning the art experts who failed to pick up on his false works?

A few days ago the Guardian newspaper reported that an unpublished book by Hebborn called The Language of Line not only sets down some the forger’s own drawing techniques, but also criticises the sloppiness of art scholarship. 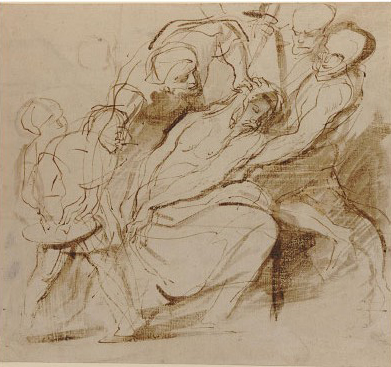 Eric Hebborn, after Van Dyck, a forged preparatory drawing for Van Dyck's Crowning with Thorns, c. 1950 - 1970. From The Art of Forgery

“To imagine that one can learn about drawings simply by looking at them is presumptuous, not unlike imagining that one can learn how aeroplanes work simply by flying in them," wrote Hebborn in the manuscript. “On the whole, critics, connoisseurs and art historians, when obliged to go beyond statements of fact—such as authorship, subject matter, measurement and medium—and speak of the quality of the drawing, tend to do so in the vaguest of terms."

Hebborn died in Rome in 1996 under mysterious circumstances; he was discovered lying in a street of the Italian capital, suffering from a fractured skull – though it is unclear whether this was the result of an assault or an accident. In any case, should we regard his words as a plea for improved authentication, or a bitter attack on the art establishment that failed to recognize his genius?

Weighing up the evidence, Charney opts for the latter position. “Hebborn was charming and had a wonderfully subversive streak to him,” the author explains. “He also enjoyed the display of his skill, and showing up the so-called experts. This unpublished manuscript may shed further light on someone who is a truly passionate and ingenious artist, and is now laughing at us from beyond the grave,” Charney concludes. “Provided of course, he did not fake his own death.”

To learn more about Hebborn and many other forgers like him, buy a copy of The Art of Forgery by Noah Charney here.

The Art of Forgery: The Minds, Motives and Methods of Master Forgers Noah Charney