How the optimistic, hedonistic artists of the Viennese Secession responded to the horrors of World War One

Major wars often serve to stop or start major art movements. Dada was, in many ways a response to the First World War, while pop art exploded with the economic boom after the Second World War.

The excellent Art In Vienna 1898-1918 by Peter Vergo covers the 20 years in which the Viennese Secessionist artists were active, from the turn of the century with all of its attendant optimism for the impending transformation of society, to the First World War, when such dreams were blasted to ruins.

The war did not affect all of the artists directly – Gustav Klimt was able to sit out the conflict at the Attersee lakeside in Upper Austria where he produced a series of pleasing works untouched by the horrors laying Europe to waste. Egon Schiele was also spared military service, deemed physically unfit for the front line.

Other artists, however, were less fortunate. Oskar Kokoschka was a cavalry recruit in the Ukraine when his horse was killed under him and he was left for dead on the battlefield with bayonet and bullet wounds. Later, attached to the press corps, he sought bravely to document the full landscape of wartime trauma, placing himself dangerously close to the action and eventually suffering shell-shock when caught by a burst of shrapnel. His courage yielded one great portrait, Knight Errant (1915), in which a medievally armoured warrior is laid low in the mud of a modern battlefield.

Still greater works were produced by the artist Albin Egger-Lienz, who saw action in Italy. He was struck deeply by the dehumanising futility of war, registering his despair in canvasses including The  Nameless Ones (1914-16), depicting soldiers advancing brutally like robotic cattle and his horrific masterpiece Finale (1918), which displays a pile of greyed corpses, limbs twisted and askew, their faces now death masks, contorted and frozen in trauma.

By 1918 many of the Secessionist artists were dead but not as casualties of war. Klimt died that year from a stroke, Koloman Moser from cancer of the jaw, while Egon Schiele perished in the Spanish influenza epidemic which claimed countless lives in the wake of World War One, drawing to a close one of Europe’s great art movements. 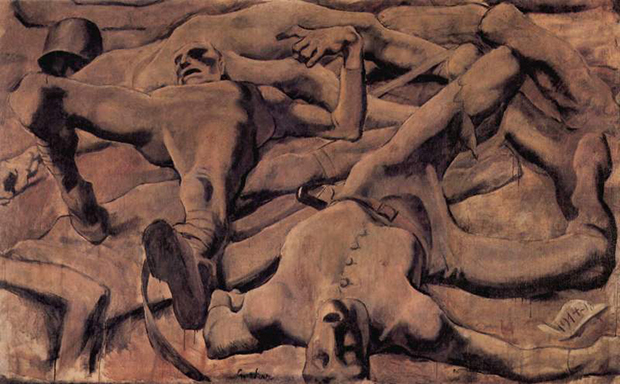 We hope you have enjoyed this brief insight into Viennese Secession. You can read other pieces, about Klimt's Kiss, the movement's radical music, and its near pornographic pictures; and you can buy a copy of Art in Vienna 1898 – 1918 here.

More on Stories from the Secession - The effects of war