How the inspired Austrian architect came to rebel against his own work, as revealed in our book Art in Vienna

In his excellent study Art in Vienna 1898 – 1918 author Peter Vergo deals extensively with the influence on Viennese architecture of the Secessionist movement, one of its most visible legacies. Architects such as Adolf Loos were in revolt against the long-dominant historicist tendencies of 19th century Viennese public building works. Their visual language was that of a hidebound and overbearing establishment, which, as with the Secessionist artists, made life as difficult as possible for the emerging young radicals.

Perhaps the most remarkable tale in this period of architectural history is that of Secessionist architect Otto Wagner. Born in 1841, he was well into his late 50s when he entered his “enfant terrible” stage. Prior to that, he had been a pillar of the architectural establishment, his first 20 years were spent executing buildings and projects in an obediently traditional, classical style (much to his later embarrassment), including the villa he built for himself in 1886-8. In middle age, however, he began to develop a more forward-looking, modernistic outlook, which coincided both with new developments in technology and the rise of the Secessionist movement, which he joined in 1899. As early as 1891 he had written in praise of the “pragmatic style of the future” but he was now infected by the missionary, modernist zeal of his artistic counterparts. 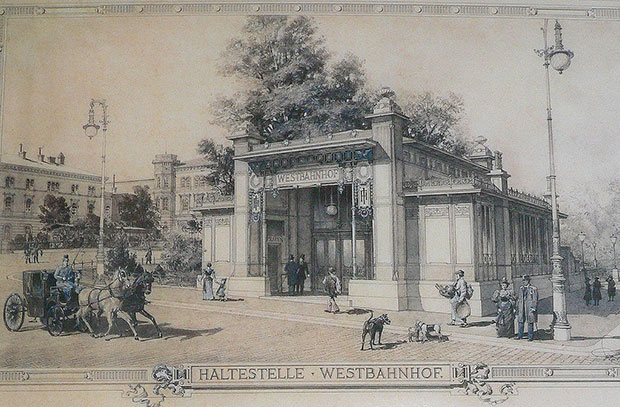 This can be seen in his design for the Viennese Stadtbahn, the metropolitan railway network, for whose design Wagner took sole responsibility. An extraordinary and detailed feat of logical functionalism and state-of-the-art technology, it also boasts decorative elements which reflected the Secessionist spirit of Jugendstil or Art Nouveau. Later projects such as his design for the Postsparkasse (Post Office Savings Bank) were still more futuristic, their use of reinforced concrete, glass, marble, aluminium and glass roofing precluding any possibility of the sort of traditionalism that had characterised his earlier work. Inevitably, reactionary critics reviled what they saw as the “vandalism” of an architect bent on ruining their cherished old Vienna. Towards the end of his life, Wagner saw ambitious projects such as his 1909 plan for the rebuilding of the Karlsplatz scuppered by the pettiness of local authorities. Such was the fate of a man who chose to be a revolutionary only after he had enjoyed a life of cosy respectability.

Be sure to look out for our next story from the Secession, and for a richer understanding of the time buy a copy of Art in Vienna 1898 – 1918 here.

More on Stories from the Secession - Otto Wagner's revolt