The much decorated children's author and illustrator talks about life in the camel corps, jail breakfasts, how snakes got a bad rep and why he thinks he’s a lunatic

His books might address children, yet Tomi Ungerer draws inspiration from his remarkable adult life. Growing up in Nazi-occupied France, Ungerer served in the French army during the 1950s, travelled extensively throughout Europe, before ending up in New York, where his work as both a children’s author and commercial illustrator won him plaudits in both fields. Now, to mark the DVD release of the recent film adaptation of his children’s classic, Moon Man, the 82-year-old author tells Phaidon.com how his wild life fed into his stories, and why he insists on treating children as equals. 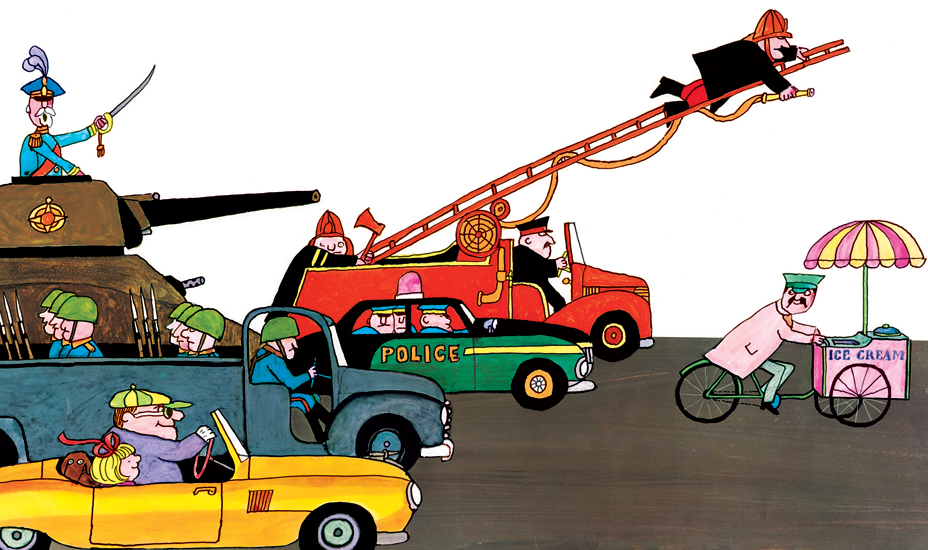 Where did the idea of Moon Man come from? I have no idea where my ideas come from, but everything is, to an extent, autobiographical. The way I landed in New York from Europe, it was like landing on the moon. So, in a way, Moon Man is me.

What do you remember of the book being published the first time around? It was quite an early book for me, first published in 1966, when I was in America. I had won prizes for my first and second books, and so it was all coming easily back then. 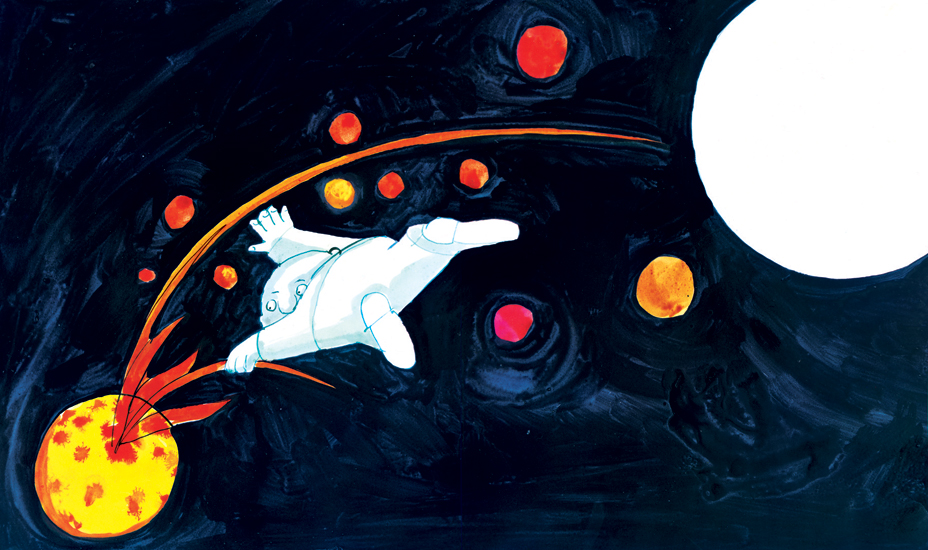 Though Moon Man is quite distinct, it shares some similarities with your other kids books, doesn’t it? Yes. My characters are always outsiders, individuals facing society; often they're animals that are unjustly disliked, like snakes and octopuses. I always write books for the child in me, books with a serious message. I treat children as equals.

Moon Man goes on the run in your tale. Have you ever had a similar experience? In the 1950s, at the height of the Cold War, I crossed the Russia lines in Lapland, on a road that went through the tundra. I sort of sneaked through; it was in the Norwegian newspapers. The Russians were patrolling, and I remember being in the woods; I drew myself in my sketchbook. 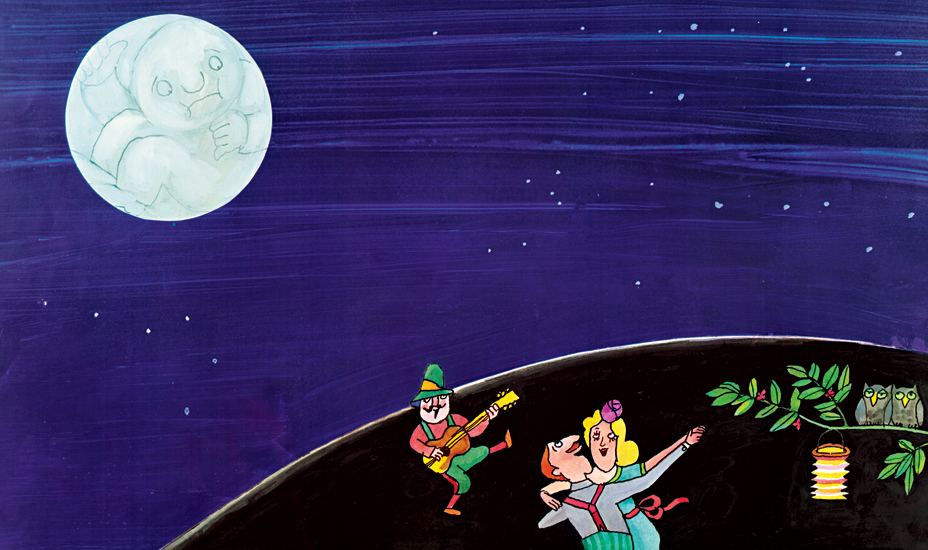 How about jail? Moon Man is thrown in prison in your book. Has that happened to you too? I was only in jail once, in Holland. I had been working on this ship, from Iceland, and they refused to pay me. So I hitchhiked my way into Holland, and I didn’t have a place to stay. I knocked on the police station, and asked them if I could stay in one of their jails. They obliged. It was very comfortable, and they even gave me a very good breakfast.

The uniforms in Moon Man are really interesting. Where do those details come from? I went through four years of brainwashing thanks to the Nazi occupation, so I saw a lot of uniforms. I was a pacifist, but I had to do my military service, in France. When I joined up, the French were at war in Indochina. Luckily, I was able to pick my division, and I chose the camel corps. I figured there wouldn’t be a lot of camels in Vietnam. And I was right.  The parade uniform was great too: big, puffy pants, a huge red cape, and a bright red belt. I met a lot of weird characters too, which served me well for writing the books. 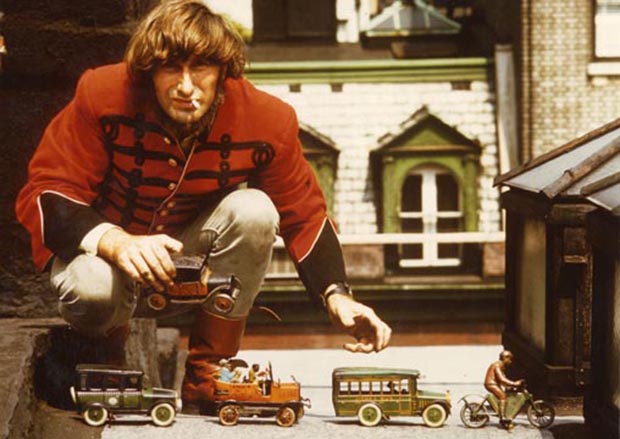 Where can we see those aspects in your work? Well, the name of one of my book’s characters is Zeralda, which comes from the suburb in Algiers where I did my training. Now parents name their children Zeralda. And in my book The Hat, the main character, Benito Badoglio, is named after the Italian general and prime minister, Pietro Badoglio.

What do you make of the film of The Moon Man? I think the story in the film worked out well. It’s sort of a different story, but then I find it hard to return to my work. I’m uncomfortable with my old books; I see all the mistakes in them. Then again, perfection is boring.

Are you a stargazer? No, but I’m lunatic a real lunatic; I am very sensitive to the moon’s cycles. During the full moon, I’m completely in shreds. I did three days full work during the last full moon. It’s very much linked to my creativity.

Your father also understood the heavens, didn’t he? Yes. My father, Theodore, was an artist, historian, engineer and clock manufacturer. He built solar clocks, as well as one of the biggest astronomical clocks; so there’s a link there. He died when I was very young, but he left me with his talents. 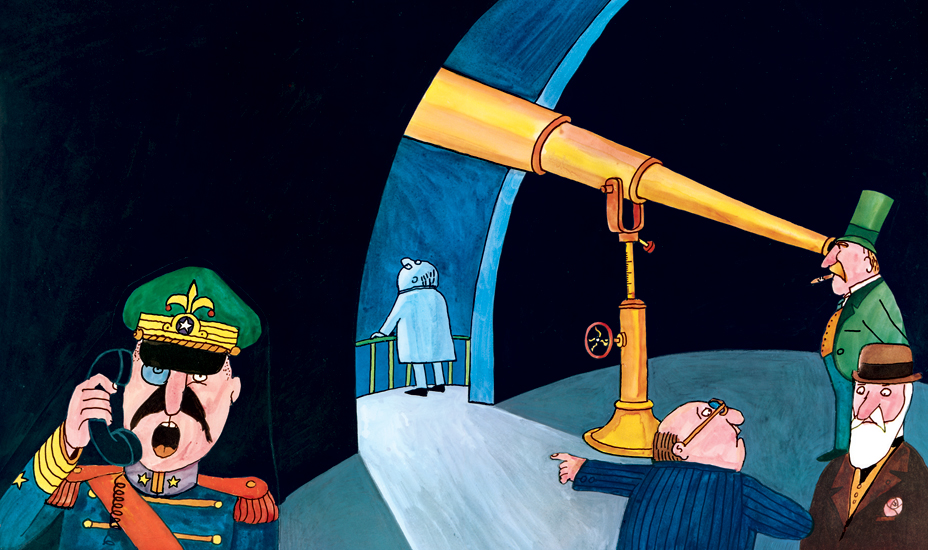 Take a look at our Tomi Ungerer books, including Moon Man, here to get Ungerer's Fog Island for iPad and Mac click here, to find out more about the film go here, and to receive a great discount on the DVD of Moon Man, join Phaidon Club.

In this classic story by one of the world's best-loved and acclaimed storytellers for children, the man in the moon looks down on the happy, dancing people on Earth every night, wishing he could join them. He hitches a ride on a passing comet, but quickly finds himself thrown into jail by people who see him as an invader, rather than a friendly visitor. The Moon Man, however, has a most unusual –  but perfectly logical – means of escape, and sets out to make his way back home. This is a beautifully illustrated, quirky and gently satiric fable that children and adults are sure to find delightful. Specifications:

Tomi Ungerer is one of the world’s most famous and best-loved children’s authors. An illustrator, writer, designer, toy-collector and archivist of human absurdity, his work spans storybooks, poster designs, political campaigns and film. He is a recipient of the Hans Christian Andersen prize for illustration, and the Musée Tomi Ungerer, devoted exclusively to his work, opened in Strasbourg in 2007.

"Maurice Sendak, a friend of Ungerer's, thought him the most original children's book writer of his time." —Sunday Telegraph

"So strong and graphically interesting... It's art – illustration at the highest level." —The Times

"[A] style marked by great originality of illustrative technique, and a use of language that refused to patronise his young readers." —Dazed & Confused

"Watch the children, the subversive is back." —New York Times

"His ability to capture the absurd […] and inject [...] subtle humour make this book a timeless classic." —Outside In

"Ungerer's artwork is distinguished by bright colors and his own distinctive style, and his stories are a beguiling mix of humour, wisdom and worthwhile messages." —Buffalo News

"A strange and hilarious fairy-tale adventure that will make nighttime kids guffaw out loud." —UrbanFamily

"Beautiful and thoughtful... Can help children from all backgrounds understand what it means to seek refuge... The poor reception and mistreatment of the gentle protagonist in Tomi Ungerer’s Moon Man (2009) when he arrives on earth serves as a cautionary tale. We learn among other things that society is only as humane and civilised as the degree to which it extends such principles to its most vulnerable members."—EAL (English as an Additional Language)

Otto: The Autobiography of a Teddy Bear

Bugs in a Blanket