Good connections are always going to attract travellers, yet few pieces of public transport infrastructure draw in sightseers themselves. However, Copenhagen’s 235m Cykelslangen or Cycle Snake opened this summer between Kalvebod Brygge over to Brygge Island, and it has proved a big hit with both locals and visitors alike.

The bike highway is bright orange - a colour traditionally associated with that other nation of cyclists, the Netherlands - and snakes between buildings at first floor height, meaning cyclists no longer have to lug their bikes up and down a set of stairs. Nor do they have to dodge the myriad shoppers on ground level around the Fisketorvet shopping centre. 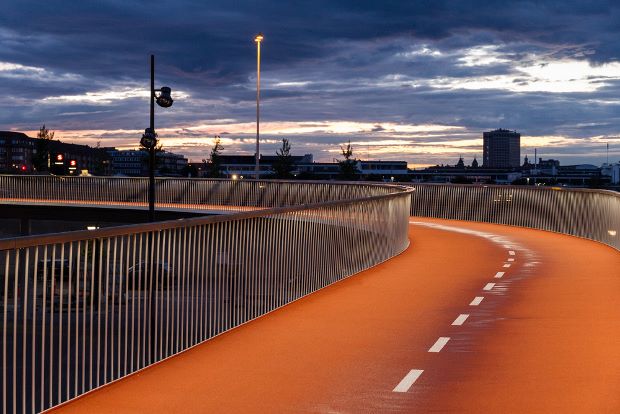 The track is the creation Copenhagen architects Dissing Weitling, who were commissioned by the Municipality of Copenhagen. The team has devised a seemingly simple structure with elegant slim railings enclosing a 13ft-wide single lane in both directions. It is supported by columns placed a modest 17m apart.

“The long ramp will be an interesting object in the area and it will separate completely cyclists from pedestrians,” explain the architects. “The cyclists will pass quickly and efficiently through the area, while experiencing a unique and exciting view. Finally, the elevated road will allow pedestrians the use of the entire wharf avoiding perilous situations.” 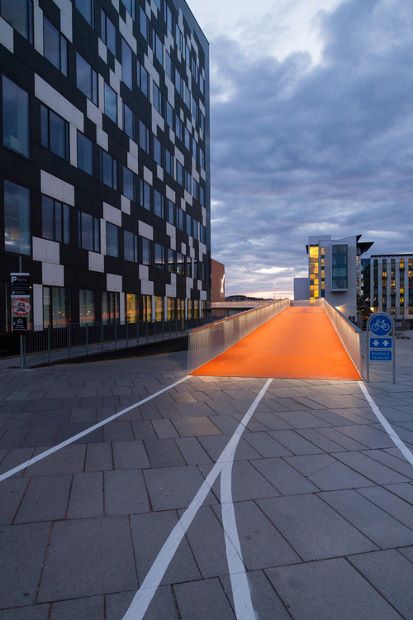 This is good news for the city’s bike riders, who make up more than 50 per cent of all commuters, and who already benefit from 220 miles of cycle paths. Copenhagen, whose cycle-friendly infrastructure is mostly down to legendary urban planner Jan Gehl, also has plans for six new bike-pedestrian bridges over the harbour.

Cykelslangen’s aesthetic and purpose has something in common with a new, elevated timber walkway in Eindhoven which was opened to coincide with the Dutch city’s International Architecture Biennale earlier this year. 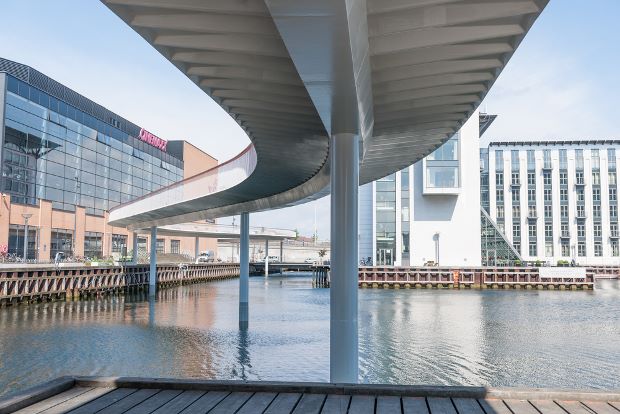 It’s also a little like the highly ambitious London elevated bicycle track scheme Lord Foster pledged his support for a few months ago. Again, the Scandinavian cities prove that, when it comes to progressive urban projects, they’re still a step – or indeed, a pedal stroke – ahead.

For more on this, go here. For greater insight into urban problems and solutions buy a copy of Living In the Endless City; if you’re going to Copenhagen don’t forget your Wallpaper guide, and for a speculative look at how our built environment might end up in a few decades time, get The World We Made.