We speak to this contemporary artist, featured in Phaidon's new, indispensable survey of contemporary drawing

“The world can be contained –  or at least mapped – in drawings, so Tania Kovats believes,” writes Charles Green in Vitamin D3, Phaidon’s new, indispensable survey of contemporary drawing. “Her extraordinarily complex works on paper show how an artist emerging in an age of often anti-visual conceptualism grapples with images, not words, in order to construct memory systems that encompass the world, while at the same time admitting the tenuous relationship of intention to the finished work of art.

“All the Islands of All the Seas (2017), a collection of thirty-two framed drawings in which Kovats superimposes island upon island on transparent Mylar film, is not a critique of theories of memory nor of mapping, but rather extracts memory-substitutes from a particular description of the world – the atlas. In effect, All the Islands of All the Seas is a new, quite systematic atlas of the world’s islands. In contrast, her large drawing Rain (2015) arrives at its composition by indexicality: different-sized drops of ink landing on blotting paper produce smaller or larger ‘raindrops’. Given such precision, framed (here, literally) by a transparent process, what are we offered by way of meaning? That is the underlying question across all this artist’s environmentally oriented drawings and installations. In her highly individual version of Land art, she assembles, reassembles and overlays land, water or air, always making lists. These lists, in turn, make the things that they contain relative. Her lists give perspective, and might therefore be considered ethical in themselves, because they relativize the individual, self-centred subjectivity that is, as we have seen over the last few years, a poor guide as to how to act geographically. 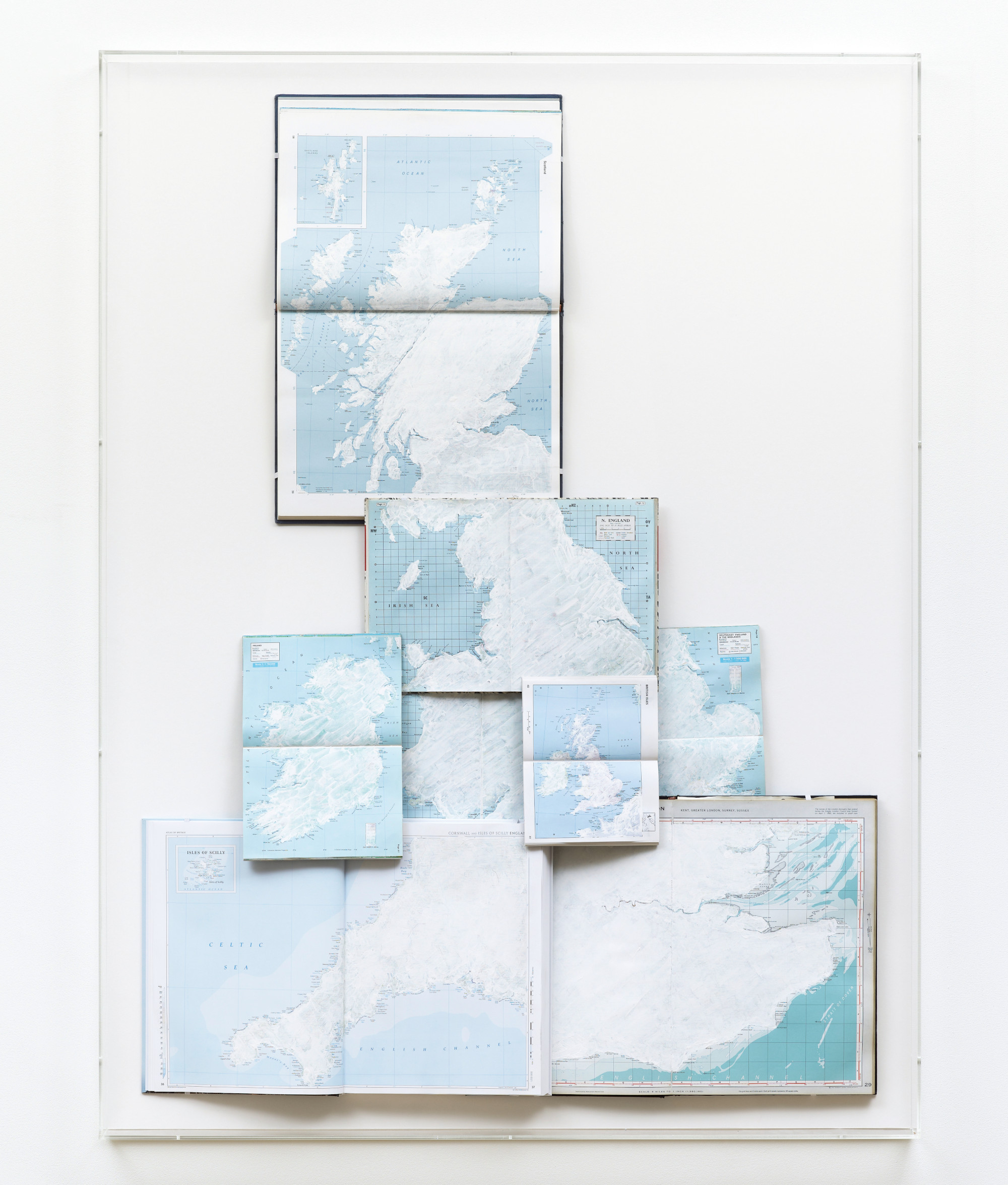 “Kovats made Only Blue (UK) in 2015, before Brexit. Presciently obliterating ‘Little England’, Kovats overpainted maps depicting different parts of the United Kingdom with white gesso, leaving only the sea in its different shades of eggshell blue untouched. According to premodern writers on memory, the commemorative process transpiring from the act of reading is an ethical one because reading a book resembles a meeting of minds,  a way of making others present, reaching beyond the confines of an egoistic ‘I’. Kovats’s recapitulations of islands, or of the United Kingdom, or of greater- or lesser-sized drops of water, offer us the performance of our own reading. Reducing the United Kingdom to a collection of pure shapes, white on blue, is a simple visual method of grasping a complex abstraction – the federation of unlike peoples and places – without it becoming overwhelming. Philosopher Elizabeth Grosz once paraphrased Nietzsche as arguing that ‘a counterforgetfulness needs to be instituted’, so Kovats institutes collections, establishing drawing as an aid to counter forgetfulness.”