We speak to these contemporary artists, featured in Phaidon's new, indispensable survey of contemporary drawing

“Drawing has been part of John Wood and Paul Harrison’s creative collaboration since the duo first met in the early 1990s,” writes Ellen Mara De Wachter in Vitamin D3, Phaidon’s new, indispensable survey of contemporary drawing. “At the time they lived in different towns and would post drawings to each other, initiating an aesthetic dialogue that has blossomed into a long-term artistic collaboration.

“Wood and Harrison’s work is often humorously self-reflexive and  their interactions, whether harmonious or conflictual, are the subject of several works. Their photograph We Don’t Like Each Other (2019) shows the artists grim-faced and holding up a placard stencilled with the work’s title. In addition to being an end in itself, Wood and Harrison's drawing practice is also an essential part of their process when working in other media, especially performance and video. It facilitates a visual conver-sation about ideas, during which they might communicate their thoughts by sketching over each other’s drawings. The studio workshop is Wood and Harrison’s primary forum, whether for the construction of sets for videos, rehearsing performances  or drawing, which is a quick and efficient method for setting out the overall structure of a work. When preparing to shoot a video, they pin drawings to the wall to create storyboards, moving them around as a way to edit sequences. Indebted to the history of Minimal and Conceptual art, Wood and Harrison’s work is often executed in black and white or simple colour schemes. For their video performances, they tend to wear basic, unbranded clothing and to match their outfits. For their seminal work Twenty-Six (Drawing and Falling Things) (2001), a series of twenty-six short films in which they interact with everyday objects and architectural environments, the artists wore black clothing and performed against white backgrounds to resemble stick figures within the monochrome landscape of pencil drawings. 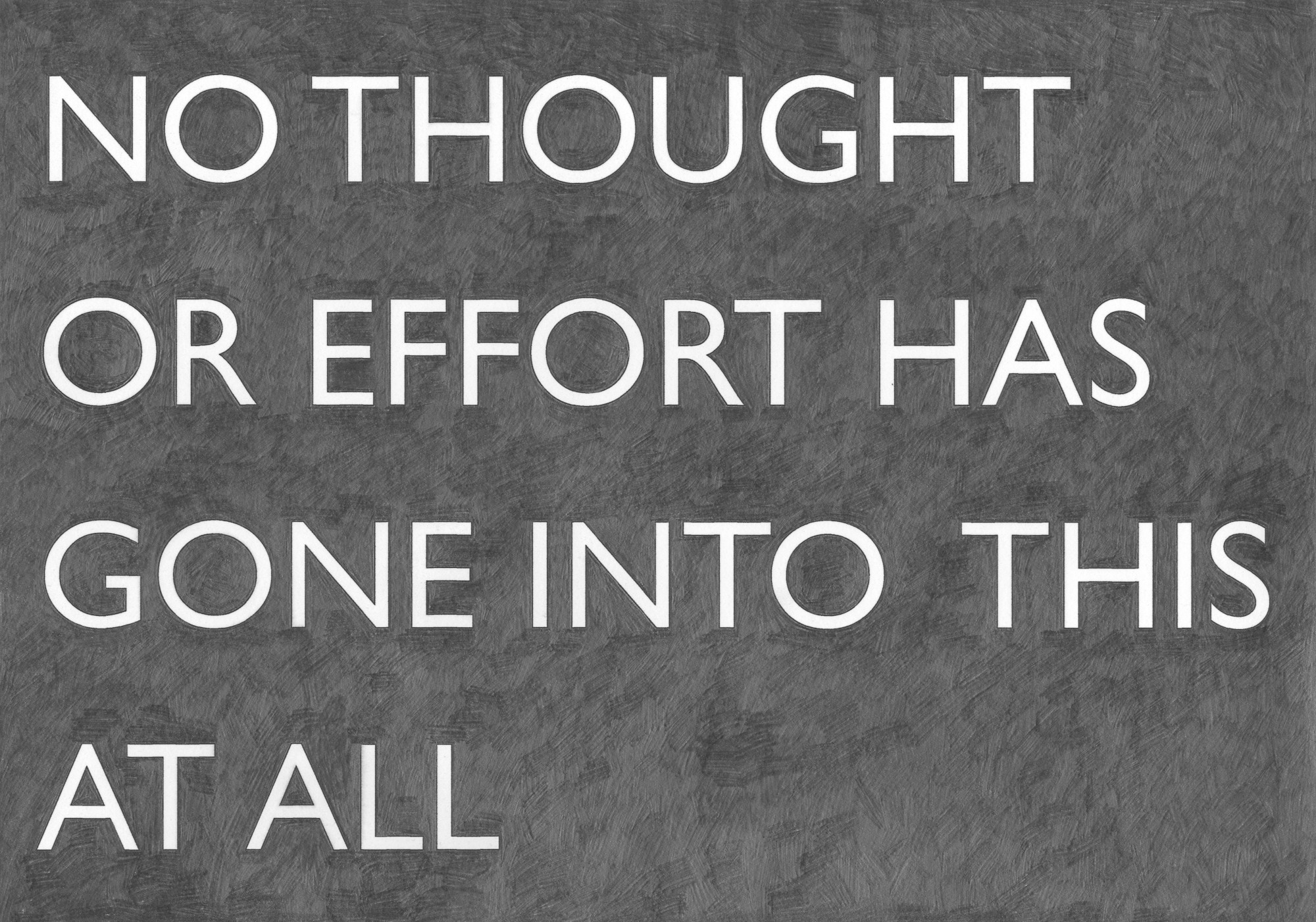 John Wood and Paul Harrison, No Thought or Effort, 2013

“Wood and Harrison’s work is the product of two dry wits influenced by the history of slapstick perfor-mance and cinema. It revels in the absurdity of everyday life and routinely deflates the stereotypical overblown ego of the artist, as in their self-referential drawing No Thought or Effort (2013), which claims that ‘no thought or effort has gone into this at all’, a statement that patently contradicts itself. The apparent simplicity of Wood and Harrison’s work belies a philosophical finesse and conceptual mischief. Their deadpan humour often pushes at the limits of logic, exposing the treach-ery of language. At first glance, their drawing Red / Green / Blue (2013) seems banal to the point of tautology. Yet the joke is on the mind, as the punchline only lands once cognitive faculty has caught up with the visual sense, to realise that the words and colours are mismatched.”