Our new book, African Artists from 1882 to Now, is hugely rewarding, not least because it proves again and again just how much beautiful, satisfying and engaging art lies far beyond the familiar, Western art-world hubs.

The title reproduces over 300 pieces by modern and contemporary artists either born or working in the African continent, showing how they have responded to cultural developments, such as cubism or studio photography, as well as wider historical forces.

Consider technology. Many of us in the West enjoy the benefits of our ever-present screens and cameras, without thinking too much about the costs, beyond the next phone bill. Artists such as Eddy Kamuanga Ilunga view things differently.

“With his intricate painting style, Kamuanga Ilunga creates stylized, figurative works that interrogate the historical, sociopolitical and economic conditions of the Democratic Republic of the Congo,” explains our new book. “His technique is so exacting that the paintings appear machine-made from afar. This connection to the digital realm is emphasized by the circuitry systems which run along the black, void-like skin of his subjects, making reference to the exploitative and ecologically harmful mining industry in the Democratic Republic of the Congo, relied on globally for the raw material coltan used to produce electronic devices.” 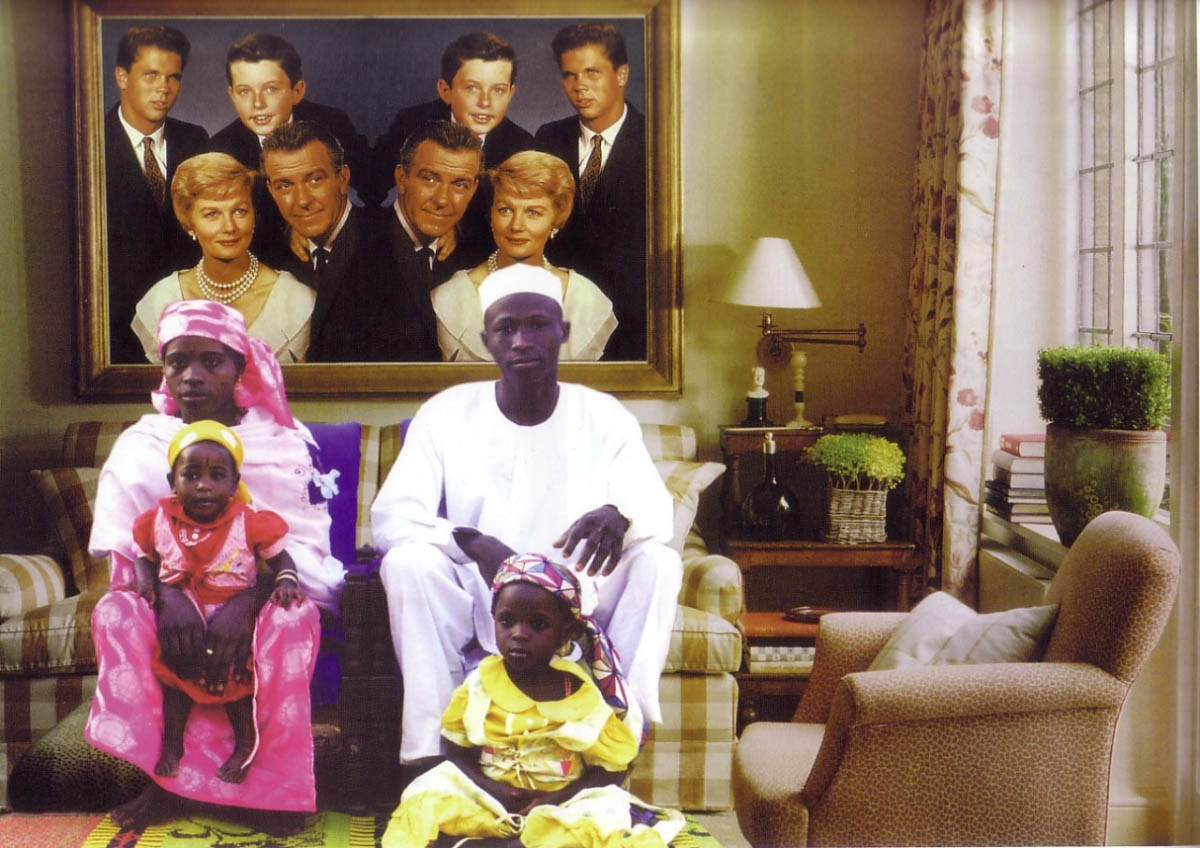 Of course, many African artists do view the world from our side of the phone screen, such as the Nigerian-born, US-based multimedia artist, Fatimah Tuggar. “Combining motifs from sub-Saharan Africa and the Middle East with Western visual mores, Tuggar produces assemblages, computer montages and video collages, alongside interactive virtual reality and augmented reality works,” explains our new book. “Working with these multiple modes of collage, she shoots her own photographs and mines advertising imagery, folklore and popular culture to create juxtapositions that reveal the complex power dynamics between geographies and social classes. This computer montage (above) uses a technique of doubling, in which a ‘picture-perfect’ image of a white family is framed on the wall. Considered in relation to the Black family sitting on the chequered sofa, it highlights the nuances between cultures, suggesting that idealized family models may often exist in parallel, even while they are manifested in different environments.” 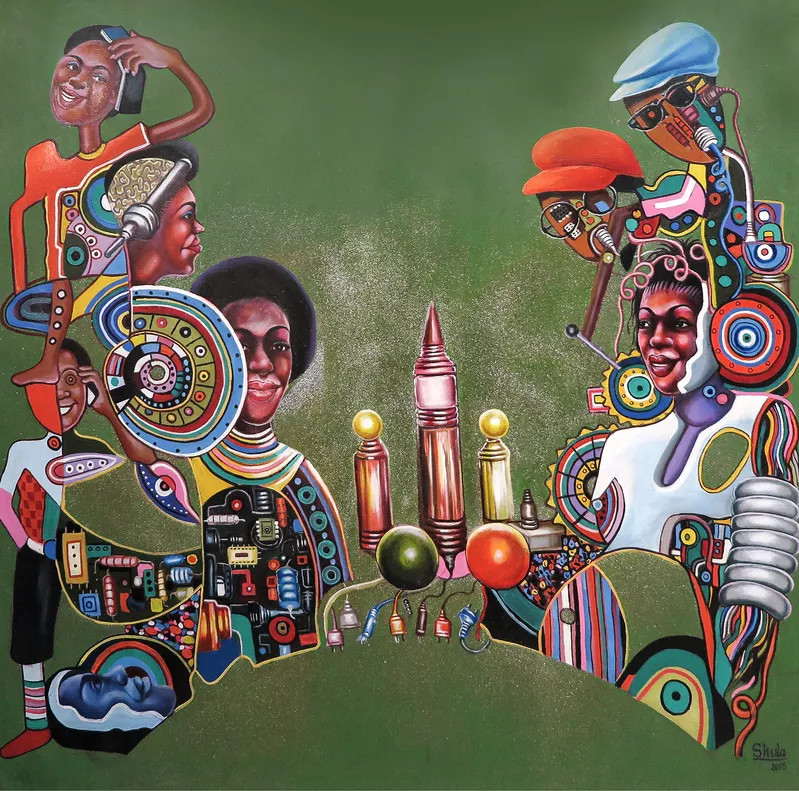 However, for a vision of a truly technologically advanced family, we need to turn to the Congolese painter, Monsengo Shula. “Beginning his career as a teenage apprentice to the influential Congolese painter Moké, Shula has since established himself as a socially and politically conscious artist whose colourful canvases celebrate and critique modern life in the Democratic Republic of the Congo,” says African Artists.

“His vividly surreal imagery reflects a wide range of concerns, from injustice and inequality to environmentalism and the effects of globalization on Congolese society. Despite dwelling on the challenges facing Africa, Shula remains optimistic regarding the continent’s future on the world stage, and a utopian streak runs through much of his work. Painted with his distinctive palette of saturated colours, this vibrant canvas considers the relationship between people and modern technology.

A group of smiling cyborgs appear in a nondescript landscape, their bodies constructed from electronic components; colourful wires form muscles and tendons, while vital organs and even some faces are made from resistors and microchips. The characters’ cheery expressions acknowledge the benefits and empowerment that interconnectivity brings to society, yet their bionic bodies warn of the dehumanizing potential of technological dependence.”

To see many more African reactions to our modern world, order a copy of African Artists from 1882 to Now.