Our new book African Artists: from 1882 to Now shows just how much we share with the African continent, and the ways in which we differ. The book profiles 300 modern and contemporary artists born, raised or practicing in the African continent. There are performance artists, filmmakers, installation artists and photographers, as well as plenty of more conventional sculptors and painters.

The book shows how key historical and influences have fed into wider ranging, global movements, such as humanist photography, neo-expressionism, impressionism and realism to shape the art of this continent. It also shows how harsher, less welcome cultural and political forces have shaped art.

For many of us in the West, armed conflict is something that takes place elsewhere. African nations have not been quite so fortunate; over the past six decades severe civil wars have taken place in many places within the continent, including Nigeria, Ethiopia, Congo, Chad and Libya, among other places.

In some instances, artists have put their direct experience of war into their work, such as the Côte d’Ivoire painter Aboudia (top image). “Drawing inspiration from street art, West African wood carvings, American Abstract Expressionism and Nouchi (an urban youth subculture in Côte d’Ivoire with its own language and visual style), his busy, multilayered paintings echo the hustle and bustle of urban life in Abidjan,” explains our new book. “Ghoulish figures with wild eyes and buck teeth frequently populate his large mural-sized canvases, often appearing alongside human skulls, scrawled texts and collaged magazine images.

“In 2011 Aboudia received international recognition for the body of work he created during the devastating civil war that erupted in Côte d’Ivoire following the disputed presidential election of 2010. This painting shows a row of menacing soldiers armed with guns and a rocket launcher, their haunting expressions mirrored by three large skulls. Painted in an underground studio, its spattered and smeared marks echo the terrifying violence that was taking place in the streets above.” 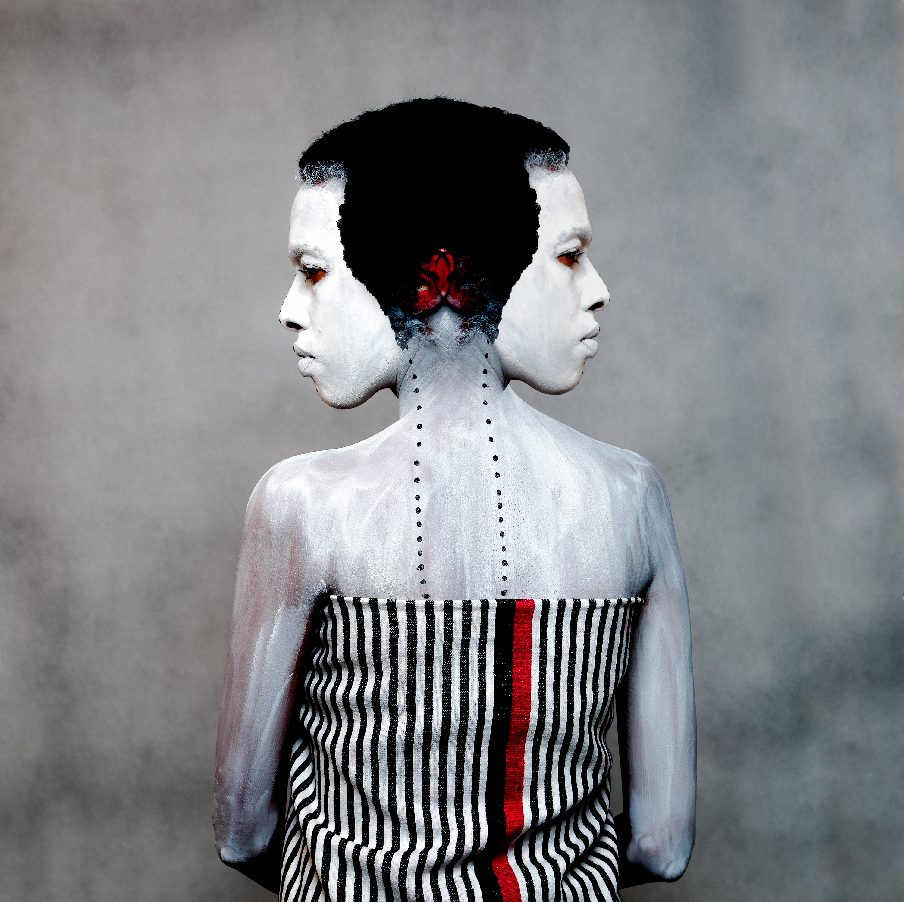 Others take a subtler, more nuanced approach to the cultural vestiges of conflict. Consider the work of the East African photographer, Aïda Muluneh. “The political instability and civil war that rocked Ethiopia after the 1974 overthrow of Emperor Haile Selassie forced Muluneh out of the country at an early age,” explains our book. “An itinerant childhood took her to the United Kingdom, Yemen, Greece and Cyprus before her family finally settled in Canada.

“In 2010 she inaugurated the biannual Addis Foto Fest, the first and only photography festival in East Africa. Committed to challenging the stereotyping of Africa as a place riddled with poverty, corruption and despair, Muluneh works in a variety of ways, from studio portraiture and documentary to her surreal and highly symbolic images of women with painted bodies. Her preoccupation with body ornamentation speaks to notions of transition, transformation and identity, as well as the tensions between modernity and long-standing indigenous cultures. In her ‘99 Series’, a young woman is painted a ghostly white with red ears and hands. In this example, Muluneh has digitally manipulated the image to create a double-faced figure, metaphorically looking to both the past and the present.”

To better understand how these artists fit into a wider picture of African art, order a copy of African Artists here.