How Van Gogh, Frida Kahlo and Richter all inform the work of China's most important contemporary painter

The great Chinese painter Zhang Xiaogang was born in 1958, in the far south west of China, into an ordinary, middle-class household, plagued by both mental illness and the vicissitude of the Cultural Revolution. Despite run-ins with the authorities, excessive drinking and his own brushes with mental issues, the artist has gone on to become the most important painter working in China today. In his works Zhang manages to reconcile the country’s choppy recent history with a masterful degree of artistry, symbolism and personal recollection.

As authors Jonathan Fineberg and Gary G Xu explain in Zhang Xiaogang: Disquieting Memories, our definitive new monograph, “Memory serves as an analogue for history in Zhang’s art, and examining history, like meditating on the structure of memory, is another of his persistent themes.”

Read on to learn how Van Gogh, Frida Kahlo and Gerhard Richter, as well as Social Realism and the 1989 crackdown in Tiananmen Square have all found their way into his work. 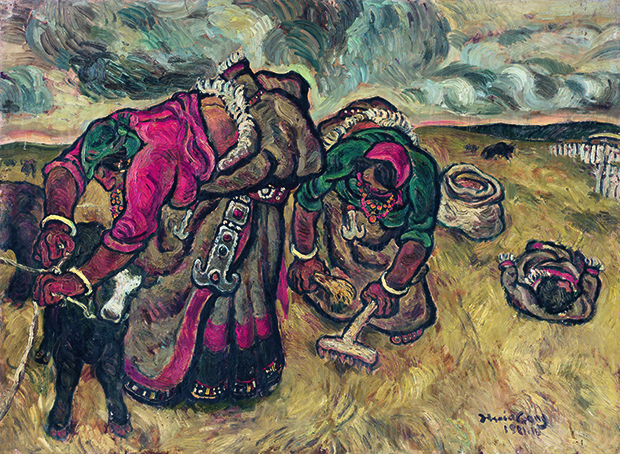 The Coming Storm (1981) by Zhang Xiaogang

Coming Storm (1981) Having chosen to become a painter, Xiaogang was expected to produce paintings in keeping with the government-approved style of Socialist Realism. From May to late July 1981 he spent some weeks in the rural communities of the Aba Tibetan Autonomous Prefecture in Sichuan, and, upon his return to college, Zhang painted a series of works drawing from this trip. Yet, even as a student, he could not keep his personal feelings off the canvas, and deliberately emulated the emotion-filled brushwork of Vincent Van Gogh. His tutors did not approve of this flourish, and it was only thanks to the chance approval from a young art critic, Li Xianting, that Zhang was able to graduate. 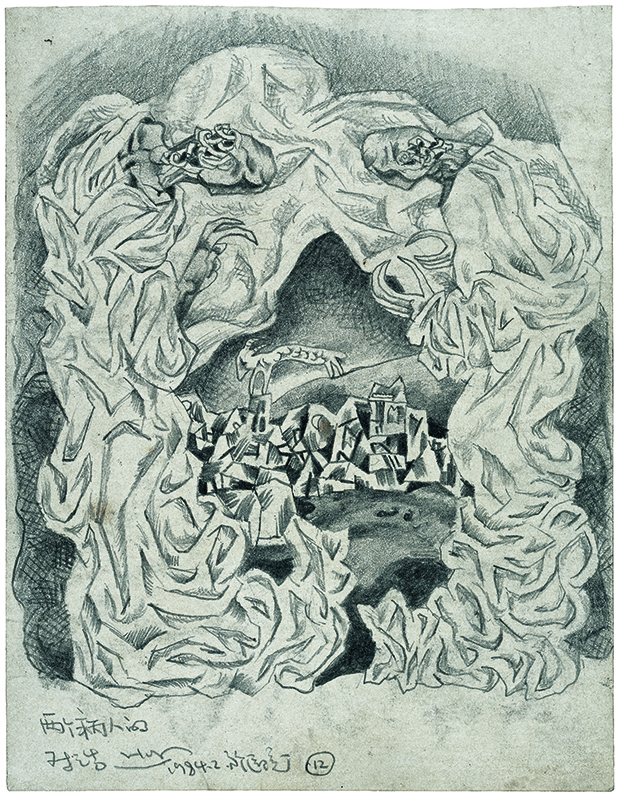 The Ghost Between Black and White No. 12: Dialogue Between Two Patients (1984) by Zhang Xiaogang

The Ghost Between Black and White No. 12: Dialogue Between Two Patients  (1984) ____ Zhang’s own mental-health problems began to impinge on his work during the early 1980s. In January 1984 his alcoholism gave rise to an intestinal haemorrhage, hospitalizing him for nearly two months. While bed-bound, Zhang began to experiment with a kind of morbid surrealism, as our book explains. “Zhang began to imagine the white sheets as ghosts and drew a series of 16 pencil-on-paper compositions of wrinkled apparitions. The ‘Ghost’ drawings are ‘all about death, disease and despair, the significance of existence,’ he explained. As a group, these drawings have an exquisite detachment of the kind that sometimes accompanies profound depression."

Eternal Love (1988) In 1988 Zhang married Tang Lei, and this triptych seems to reflect on the conflicting emotions of love, anxiety and hope, expressed in a manner reflecting the artistic freedoms he and his fellow Chinese artists enjoyed just prior to the 1989 crackdown in Tiananmen Square.

“The figures and the abundance of discrete, private symbols in Eternal Love all seem to exist each in their own time and space, as in the ‘magical realist’ paintings of Frida Kahlo, which Zhang discovered at this time,” our authors explain. “The painting is in itself turned inwards as a reflection on the artist’s life and on his thoughts about the meaning of life.”

Bloodline – Big Family No. 3 (1995) From 1993 to 1999, a family theme occupied the artist’s attention almost exclusively. The pictures became his first signature series, garnering broad international attention. In part they are influenced by Gerhard Richter’s use of photography as a way of exploring memories, but they are also influenced by the very style the artist rejected earlier in his career. In these works Zhang went back to the technical precision of Socialist Realist portraiture and even made his own version of its generic types here and in all of the ‘Big Family’ paintings; this is part of his attempt to sort out the era of the Cultural Revolution for himself.

Our authors note, “the people in the ‘Big Family’ paintings stare solemnly straight ahead (except where the eyes are crossed), locked obediently into a formal pose, and the blankness of their stares has a profound sadness. This examination of the social pressures to fit in – whether into the conventions of studio photography or, metaphorically, into the collective norms – produced ‘great emotional turbulence’, and that tension is precisely the point.”

Taking this personal point of view, Zhang was able to express the experience of his generation as a whole. The book goes on to quote the historian and critic Li Xianting, who wrote in 2004 "the Bloodline series marks not only Zhang’s maturity, it also marks the maturity of Chinese contemporary art as a whole." 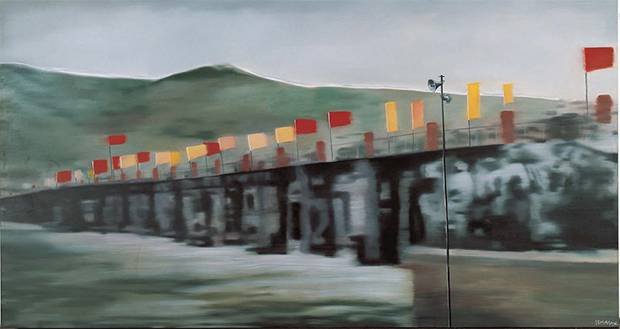 In-Out No. 4 (2006) Richter’s influence can be seen elsewhere in Zhang’s painting. His series In-Out bear a similar photographic quality. The pictures, our authors explain, are “focused on the transformation of the surroundings of daily life with public structures in the countryside and in the city, as well as of the character of domestic interiors under socialism.”

The German painter appealed to Zhang partly because of his ability to rationalize and express the experience of having lived under socialist rule, as well as a numinous quality that lies beyond words.

“As in a dream, this one sharply focused feature in the ‘In-Out’ paintings seems to beckon like a gateway to the past and to a deep well of meaning. The public loudspeaker in the foreground of In-Out No. 4 (2006), for example, has a disconcertingly perfect clarity. The work’s overall indistinctness, however, creates the sensation of a casual snapshot taken in the countryside at a celebration on an anonymous bridge, festooned with flags, but blurred into indistinctness. As in a painting by Richter, specificity seems to slip from our grasp.”

For greater insight into this important contemporary painter order a copy of our new book here. 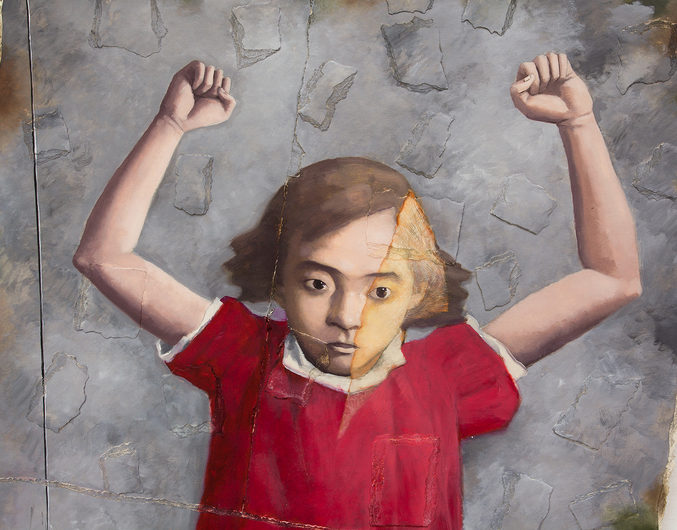 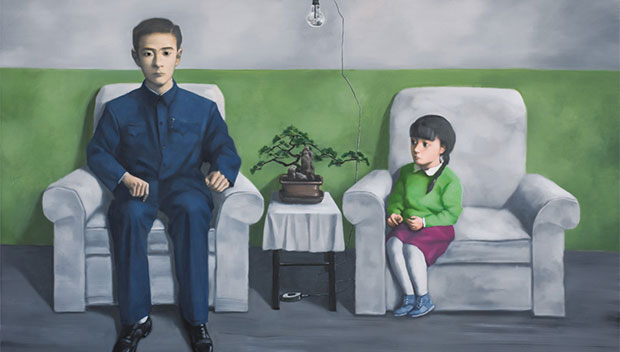 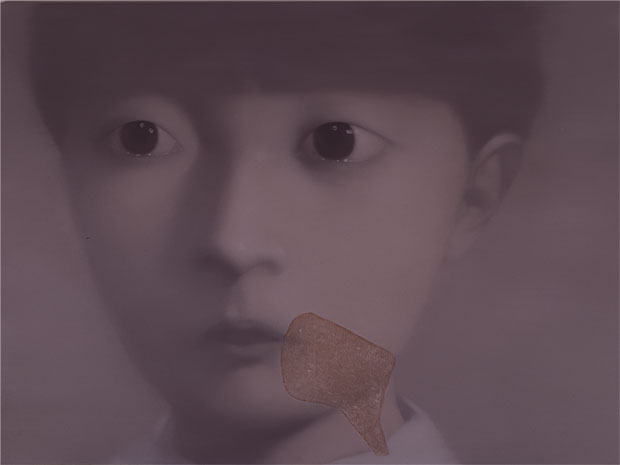 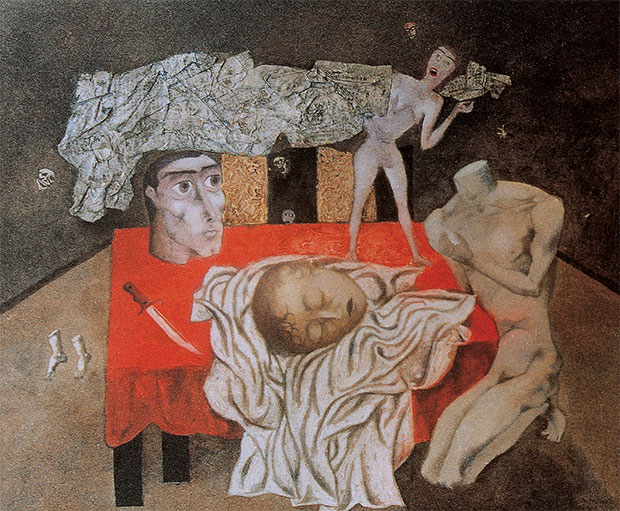 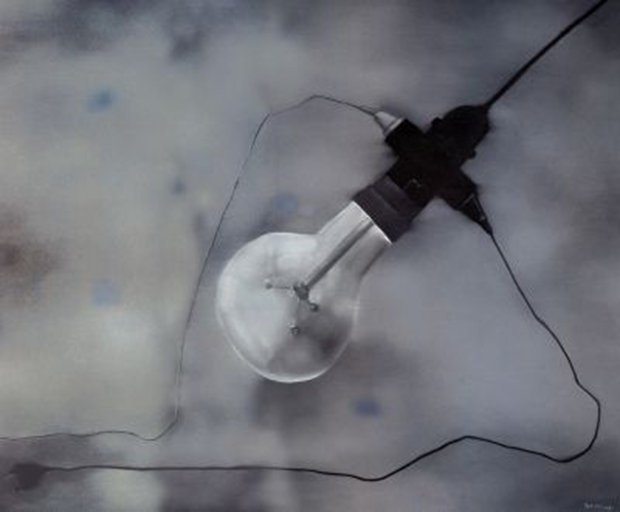 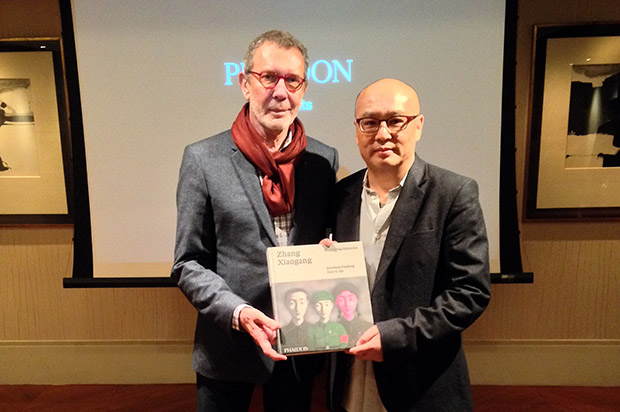