Heard the one about the beloved Madonna, laid low by a pair of cherubs? The Our-Lady in question is Raphael’s Sistine Madonna, who celebrates her 500th birthday in 2012.

It's remarkable and highly ironic, then, that though the painting still boasts a pair of instantly recognisable figures, it’s no longer the Madonna and Christ Child. In recent times, Raphael’s pair of chubby cherubs – found at the bottom of the scene, whimsically looking up – have utterly supplanted them.

So famous have the angels become in their own right – adorning everything from chocolate boxes to condom packets – and so dissociated from their original context have they grown, that few admirers today realise they’re actually only a detail of a High Renaissance masterpiece.

An altarpiece commissioned by Pope Julius in 1512, for Piacenza’s monastery of San Sisto, the Sistine Madonna depicts a beguiling Madonna and Child hovering on the clouds. They’re flanked by a kneeling pair of saints – Sixtus and Barbara – with the two cherubs completing the scene beneath, leaning on a balustrade and gazing at the divine happenings above. 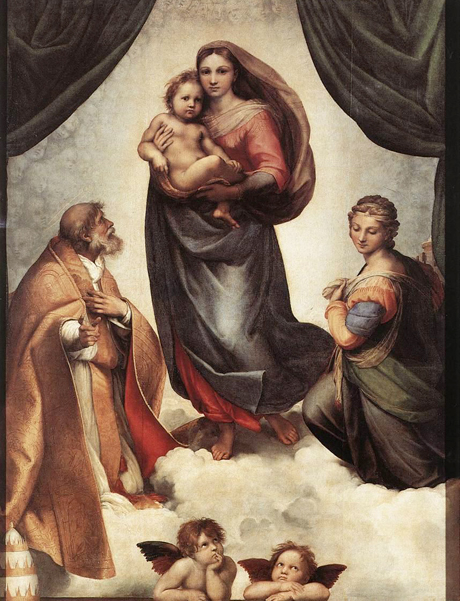 The light brushstrokes with which Raphael depicted them suggests the duo were added late, perhaps even as an afterthought, to fill the expanse of cloud beneath the Madonna’s feet. According to one apocryphal story, they were based on the sons of Raphael’s model for Mary – tired at hanging around all day for mum to finish work and keen to head home for dinner.

In 1754, the Sistine Madonna was sold to Augustus III, Elector of Saxony. It has remained in Dresden pretty much ever since – apart from a brief spell in Moscow - and is currently in the city’s Gemäldegalerie. It’s to be honoured with its own exhibition in 2012 running from May 26 until August 26.

Perhaps the bored expression on the cherubs’ faces will now finally be explained. They lack all the reverence associated with an altarpiece. Especially one by such a master of radiance and decorum as Raphael. Traditionally, angels were teary little things (at the Crucifixion) or cheery little ones (at the Nativity), yet the Sistine pair seem idiosyncratic, bordering on iconoclastic.

It may be precisely this that explains their longevity. In this secular age, the cherubs – removed from their Christian origins – now register in a way that Madonnas, Christ Childs and overtly religious figures do not. In one sense, they became icons for the late twentieth-century age of apathy and ennui. Intended by Raphael as a highly human foil to his divine scene above, they offer us, in short, both a classy Renaissance veneer and a thoroughly modern sensibility.

The cherubs took on a whole new set of cultural connotations. As bewinged infant boys, the link with cupids of classical tradition was logical enough: hence their appearance on Valentine’s Day cards and, by extension, condom packs. In 1995, the pair also graced American postage stamps in the run-up to Valentine’s Day.

Nowadays the cherubs adorn fridge magnets, restaurant menus, toilet seats – pretty much anything, really. Lost in their own thoughts, without a care in the world, the little cherubs whisk us nostalgically back to our own childhood innocence: an ever-popular destination.

Much like the Mona Lisa, they’ve become Pop culture icons. And just as Duchamp added a moustache to La Giaconda, so the cherubs now commonly appear – on cards, T-shirts, etc – in playfully altered form, puffing on marijuana joints, for example. Raphael, presumably, would have appreciated the irreverence.