To mark the release of his debut Artspace and Phaidon edition we talk to the artist about his life, love and artistic practice

It was while he was at school that the artist Jean Jullien began keeping a journal. “There wasn’t much in the way of rules,” recalls the French artist, who was born in 1983, and was educated in Quimper, a city in the north-western region of Brittany, in France.

One of Jullien’s teachers, Jacques Vincent, simply encouraged the young Jean to take up a daily drawing exercise. “The idea was to get us to draw and draw and draw so that we developed a visual language. And what better way to do that than to look for inspiration in what is around you? I think that my practice of drawing every day and my interest in everyday life come from that exercise,” he says. 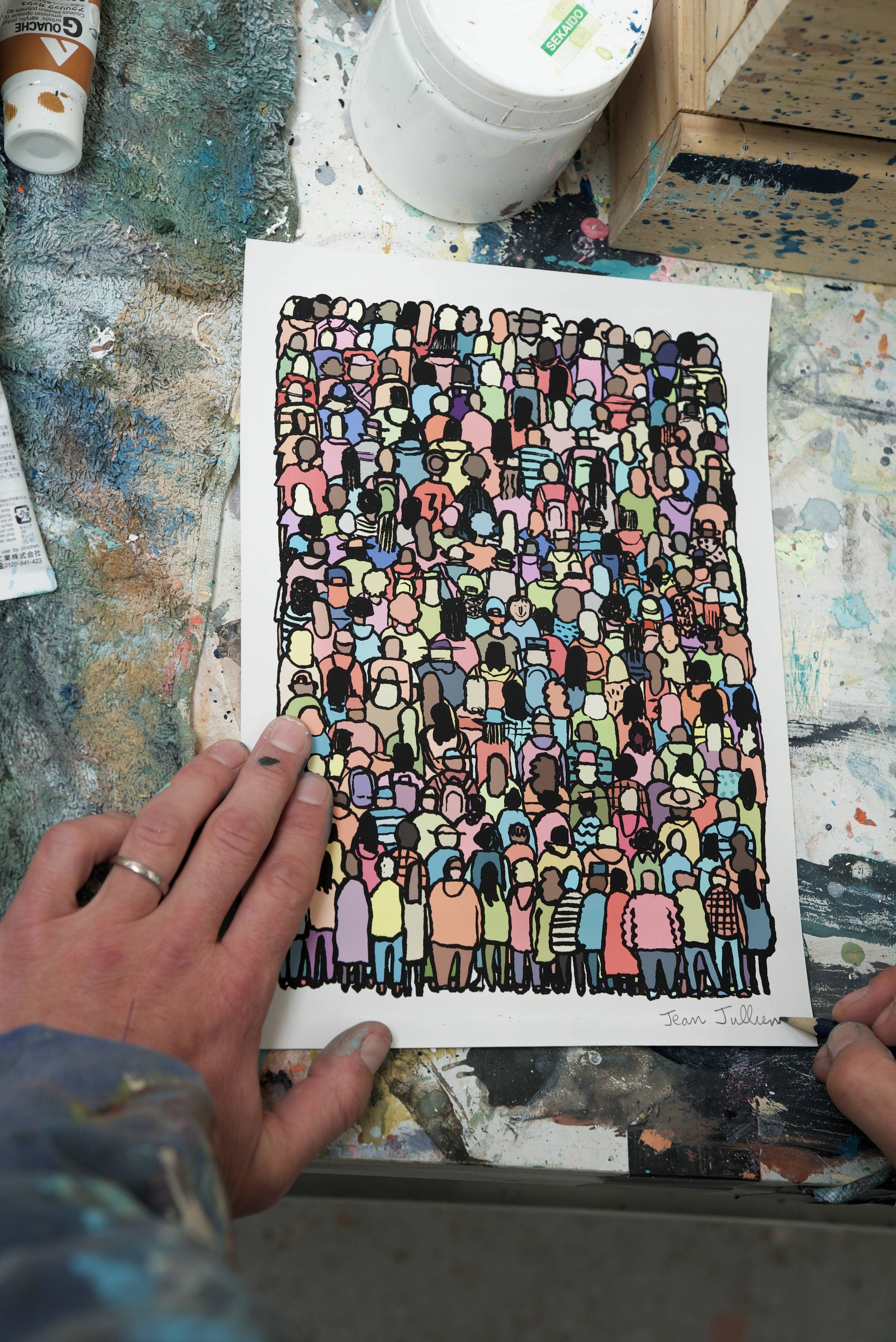 Indeed, few people in Jean Jullien’s life can remember a time when he didn’t draw. His output is as consistent as it is prodigious; there are painting exhibitions, public installations, commercial commissions, fashion collections, numerous collaborations, and now, his first limited edition print created in close collaboration with Artspace and Phaidon.

Public (2022) is available in an edition of 75 signed and numbered prints. Each edition is accompanied by a hardback copy of Jullien’s new Phaidon monograph, presented together in a vibrant, bespoke portfolio case.

Spotlighting one of his favourite subjects—people—and referencing a unique work of the same name, Public highlights the artist’s playful approach to scenes from everyday life. Jullien makes use of his trademark wit standing amidst a colourful crowd, placing himself at the scene, represented by the single figure who gazes back at the viewer.

Jullien’s keen observation and unerring line is to the fore. Indeed, there seems to be a link between those regular observations of life, and the artist’s reassuring, all-seeing style.

Perhaps we too can draw a line from the school age Julllien’s adoption of this daily illustrative practice, and the emergence of his distinctive style. If Jean Jullien had been born during more difficult times, to a less supportive family, in a less verdant, and beautiful part of the world, that style might have been quite different. However, as the artist says in his new book, “I had a happy childhood growing up in a happy family.” He goes on, “work for me is something happy, so it seems to me that the two are linked.”

“My connections with my family, my sister, my brother, my parents, places, the things I’ve always loved give me my bearings, support me like crutches in a way, and I keep them with me wherever I go,” he clarifies. “They are so joyous for me that I have a burning desire to share them.” 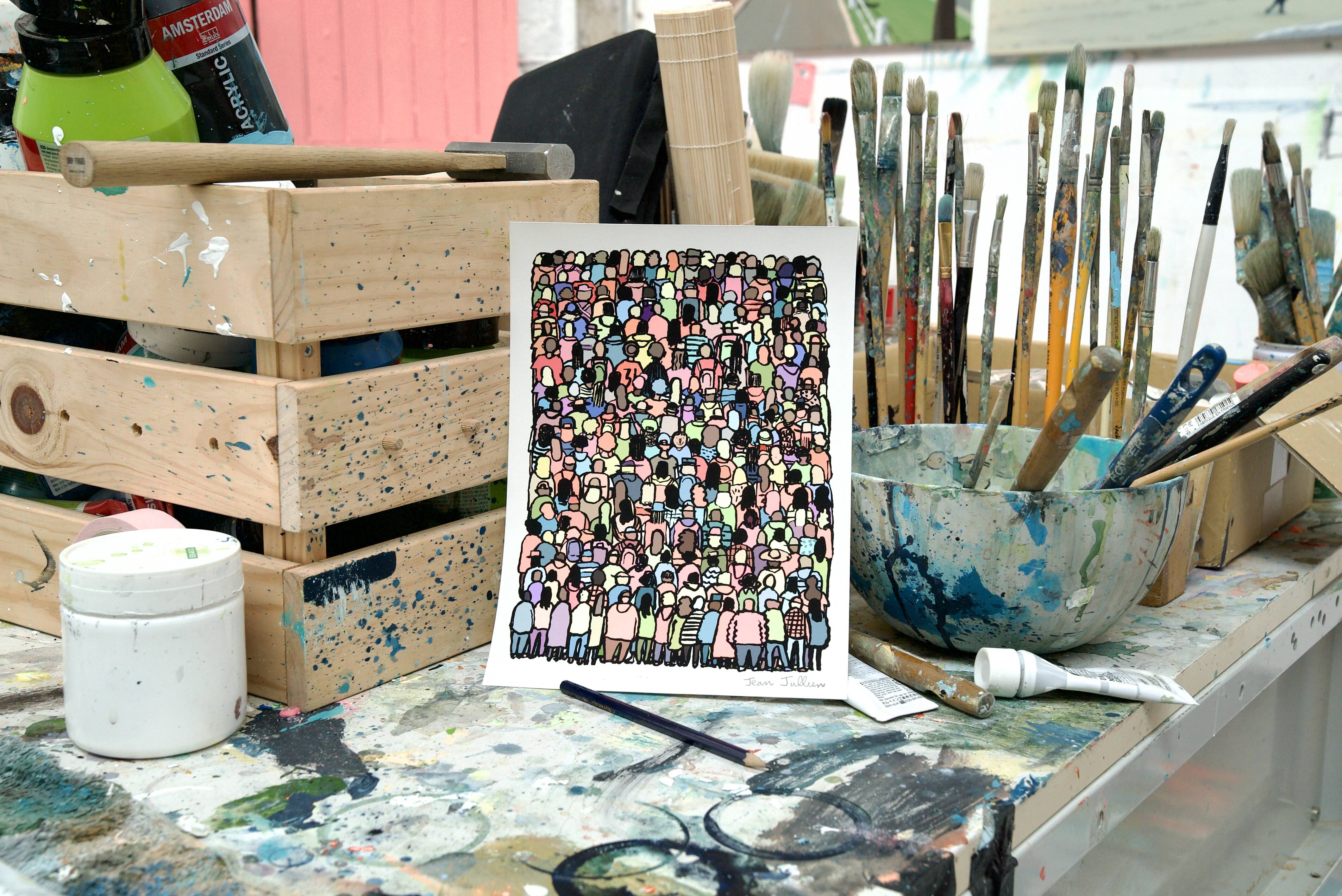 His mother, an exhibition designer, took Jullien to museums, where he first encountered great painters such as Pablo Picasso, Edouard Vuillard and Henri Matisse. His father, a public servant and something of a cinephile, stoked Jullien’s appreciation for movies; while his brother, a keen musician, became an early collaborator.

The artist also alighted on American comics and Franco-Belgian bandes dessinées, with the imports truly capturing his imagination – Marvel titles in particular. “The Amazing Spider-Man vs. Doctor Octopus—that’s the first one I remember reading—and the Doctor Strange series too,” he says. “Comic strips obviously had a huge effect on me.”

“I still read comics now, by the way,” he says. “I’ve always been captivated by the pictures, and naturally, I wanted to recreate them. With drawing, there’s no need for translation from one language to another. You create an image, and even among people who speak the same language, each person interprets it slightly differently. That creates a dialogue. There’s this universal back-and-forth conversation, which I like a lot.”

Fortunately, language was no great barrier for Jullien. He collaborated well with fellow students at Central Saint Martins art school in London, where he took his Undergraduate degree from 2005 to 2008; and the Royal College of Art, also in London, from where he graduated with a Masters degree in 2010. 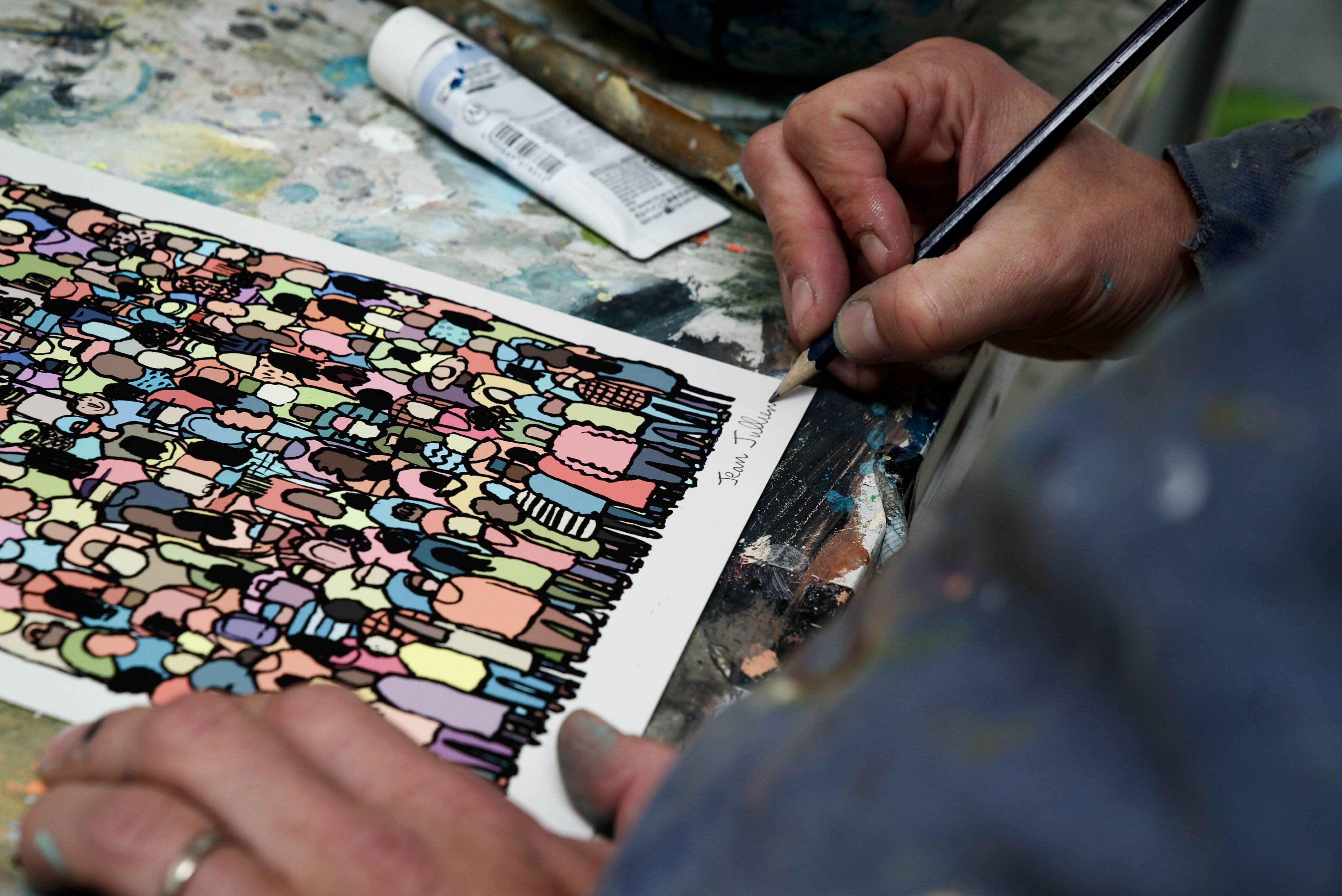 Joint artistic enterprises seem to suit him, though it took Jullien a while to get comfortable with the idea. “When I began to find my ‘style,’ during my time at Saint Martins, I felt that I had to make everything I produced myself or it wouldn’t be authentic,” he confesses. “Later, when I worked as part of a team, I realised that what matters is the initial idea and whether the end result works. Collaborating is just as rewarding. You don’t need to be on an artistic pedestal.”

Indeed, now he regards group work as a way of furthering his abilities. “By collaborating with people,” he says. “I can extend the spectrum of what I can do so much.”

In the decade between 2010 and 2020 he produced an enormous amount of work; from fashion collections to design objects, branding and interiors projects, landscape paintings, editorial imagery for major publications, and video works.

However, it was one, simple, solo work, created in the middle of that decade, that substantially raised Jullien’s profile. In 2015, the artist received global attention when his simple Instagram post of a silhouette of the Eiffel Tower within a CND ‘peace sign’ – created in reaction to the November 2015 Paris terrorist attacks – was picked up by news services across the world.

Less well-established artists might have regarded the newfound fame as an opportunity for career advancement; Jean Jullien did not. Instead, he backed away from politicising his work and continued, and continues, to focus on the simple, relatable, loveable aspects of life that surround him, such as landscape, romance, childbirth, family, wine, humour, surfing and the beach - all of which seem somehow wrapped up in a new edition that celebrates the joyousness of human togetherness.

Now a father, Jullien likens his artistry to one small but important aspect of parenting: drawing children’s attention to small details and beauties within the world.

“Being able to tune in to the everyday is something I have become aware of now that I have children of my own,” he says. “I don’t have the time to collect and capture images as obsessively as I once did and would still sometimes like to do. Now, I often take photos so that I can paint from them later. I like to keep memories because I figure that the little things are interesting enough for me to want to remember them as well.”

Reflecting on a period spent in small coastal settlement of Lesconil, (again in Brittany; his father was mayor of the town), with friends and family, beside the sea, he describes his artistic impulse as “an impulse to recreate the essence of happiness: taking something that made us happy when we were children, like role-playing, making music videos, and more, and trying to redo it in our own way as adults—and make it exciting. My work is about communicating the positive in things, making people smile, making them think, too, sometimes, I hope.” 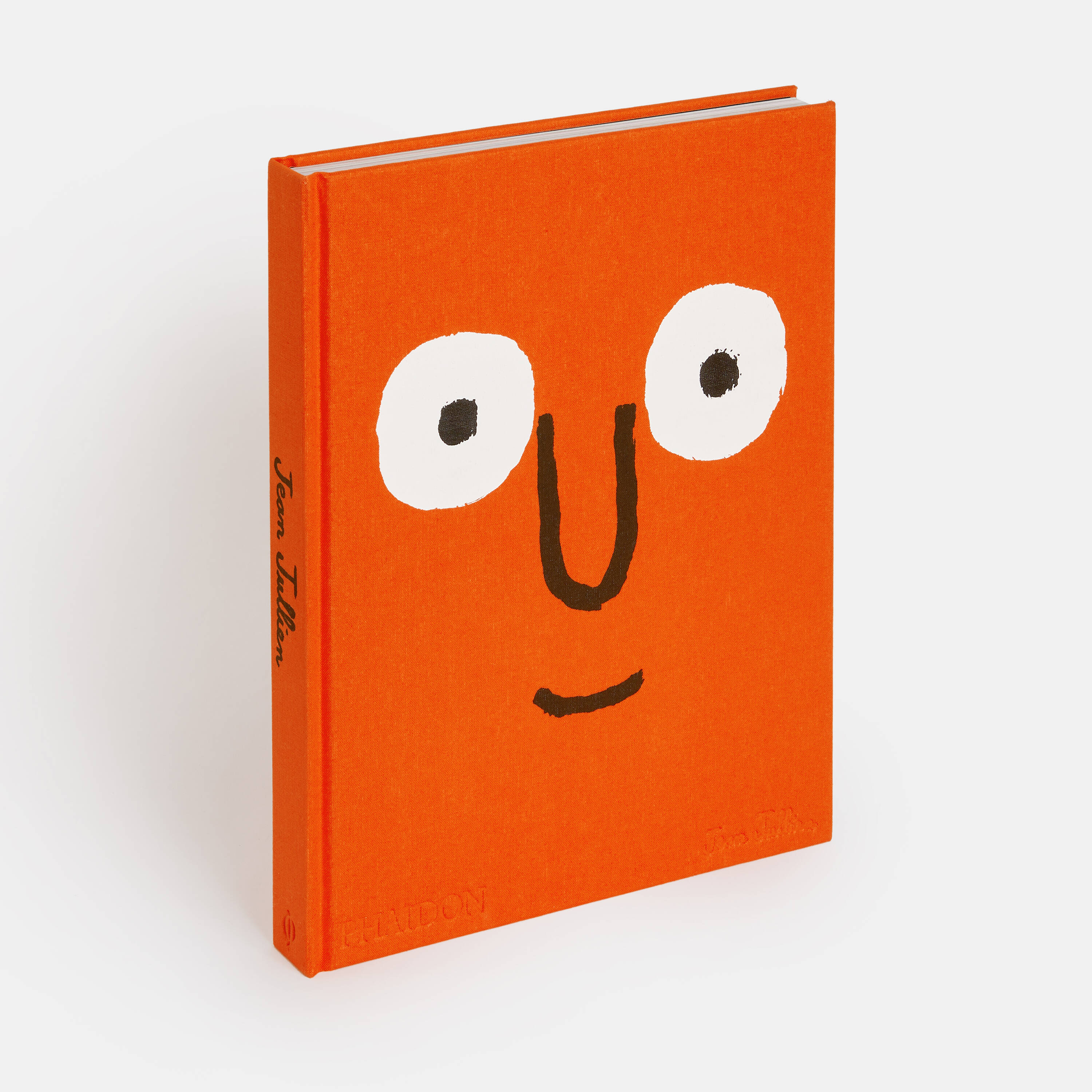 Really, should we ask for much more? You can buy the Jean Jullien edition here, and his new book here.

More on Jean Jullien: I want to recreate the essence of something that made us happy when we were children