The Shooting Space author and Constructing Worlds co-curator on new ways of looking at modernist icons, architecture as the backdrop to our lived experience and why he's still enthused and excited by the city

Since the invention of photography, architecture has proved a worthy subject for photographers, and, in turn, photography has played an important role in how architecture is communicated. Our new book Shooting Space is not a book of architectural photography but a book of photography that studies the artistic response to architecture through the eyes of 50 of the best photographers working today. Its author, the renowned curator and writer Elias Redstone sat down with us on the eve of his Constructing Worlds show at the Barbican, London to tell us more about it.__
__

Shooting Space is a collection of artistic responses to architectural photography. Did you come across a common element in those responses? I think what I found was a diversity of approaches both conceptually and aesthetically to the subject of architecture. The one that connects the artists in the book is the understanding that architecture is a symbol that can be used to express something about how we live, about our society and the world we’ve built around us. But there’s a diversity of approaches to do that.

Did you discern a way in which their responses had perhaps been shaped? I think people have different influences both from their studies, their academia, but also where they’re from. Growing up in different countries and cities inspires people in different ways. For example Thomas Struth started photographing the streets around his hometown Dusseldorf and he grew up in this post war reconstructed city that still bore the scars and the ghosts of the war. The streetscapes of this project grew and it embraced other cities around Europe and then New York. But this sense of alienation, to the surrounding, could be felt throughout. And he was an artist that studied under Bernd and Hilla Becher in Dusseldorf alongside Andreas Gursky and Thomas Ruff who are  both in the book as well. And similar conceptual interests and typographies can be seen in their work. 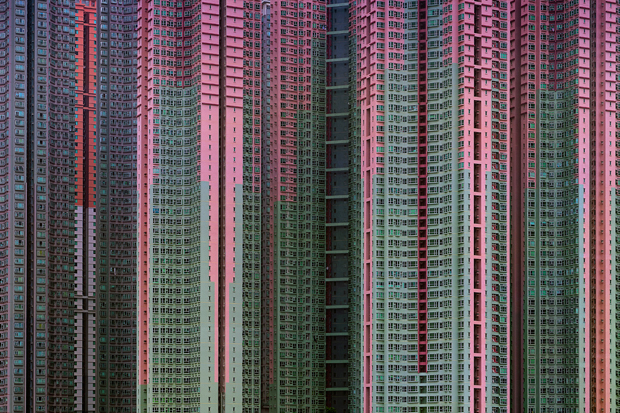 As well as a formalism and rigor to all the work there is a shared beauty too, isn’t there? That’s the power of photography. The artists in the book's work is beautiful even when they’re looking at ugliness or banality or sites of neglect or dereliction. I think this is also maybe a legacy of the New Topographics movement of the 1970s. This was a time in the Seventies when people moved away from looking at landscapes that were just of natural beauty to consider the overlooked and everyday sites that we encounter and began to consider how they could be beautiful or how they could be used as a way of being critical of suburban and urban growth and the way that we live and consume.

Can you remember your own first artistic response to a building?  I don’t think there was any one building but I do remember having a response to cities. I grew up in the countryside and I was drawn to the city, to the urban, And for me, it represented something dynamic and creative that I wanted to be part of. I guess being an outsider to large built up areas, I’m still enthused and excited by them in a way.

Is there a lineage from photographers like Berenice Abbott who photographed Manhattan as it grew in the 30s to the work of the contemporary photographers featured? I think there’s multiple influences and channels like that. There are people that have inspired and rightly so – whether it’s Lewis Hines or Walker Evans and his earlier work in typology and frontal photographs of buildings in his documentary style to the Bechers and to many others. Even early architectural photographers such as Julius Schulman – the godfather of architectural photography. His beautiful colour images of mid century Californian modernism that captured a time and a place; to Lucien Hervé’s collaboration with Le Corbusier and communicating his brave new world to the masses. I think that the influences are many and you can see that it’s so diverse in the book. 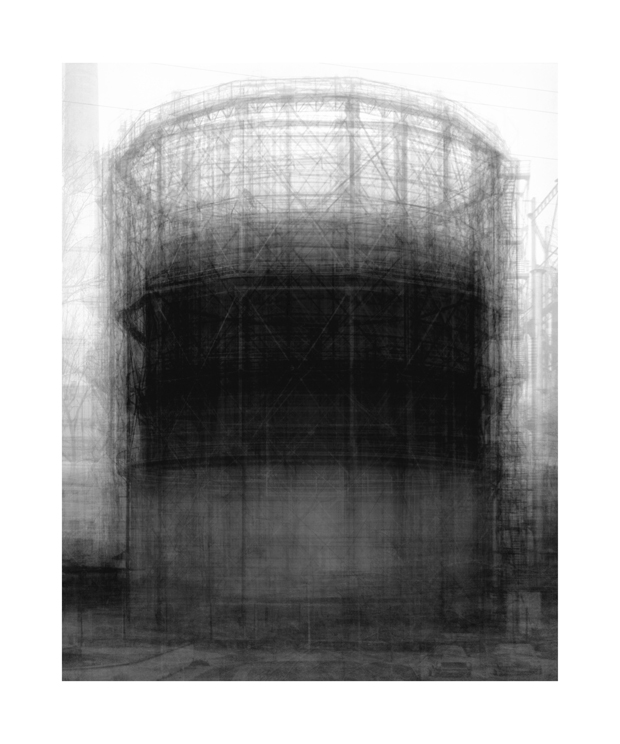 The dynamic relationship between artist and architect is a fertile one isn't it?  Yes, Hélène Binet, for example, is a very interesting case. She’s struck up a long-term relationship with a number of architects. She makes these very interesting images. She resolutely works on film. She likes to shoot while the building is under construction as well as when it’s complete. But she very much understands that challenge of representing three-dimensional spatial experience in two dimensions. So she doesn’t just try and document the building, she tries to represent the experience or the emotion of the space in her work and present an image of the architecture that communicates the ideals of the space. And you feel like you can almost reach out and touch the architecture in her photographs. 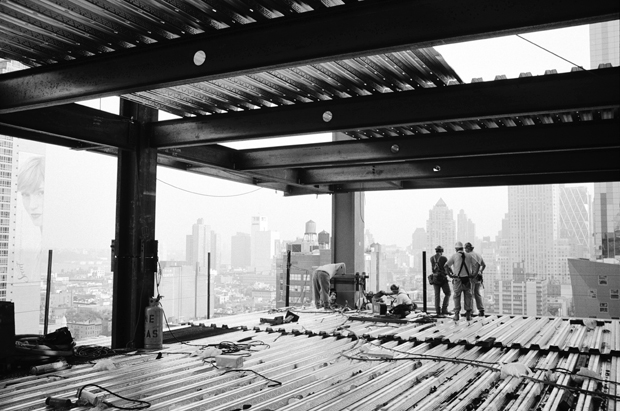 The inclusion of photographs by Annie Leibovitz may seem surprising to some? She’s produced an incredible body of work. Her study of Renzo Piano’s New York Times building under construction references and relates back to Lewis Hines and the seminal Thirties photos of New York under construction. It’s a body of work that’s a decade old but I’ve always had my eye on it, and this is my chance to celebrate it and give it the profile it deserves. 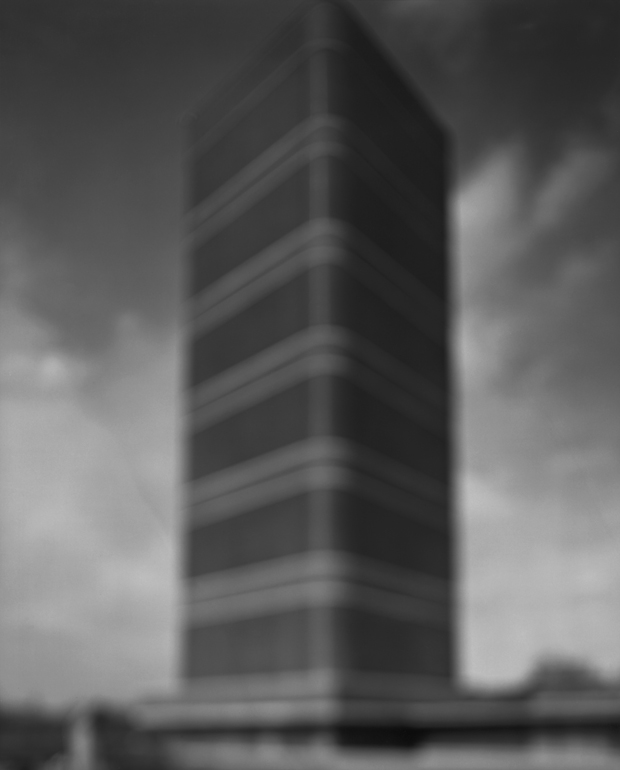 In the introduction to the book you talk about how buildings are 'for the most part solid, immoveable objects' yet the lives of the people inside them are ever changing, aren't they? I think what’s really poignant are the photos of Mathieu Pernot. He photographed housing blocks in the Banlieues and outer suburbs of French cities. So these are the utopian buildings that went up, residential blocks to house families that failed. And this says that architects don’t always get it right. In this destruction you wipe away lives and stories, because architecture is the backdrop to our lived experience, our history so it can almost be an attack on the people that were living there. 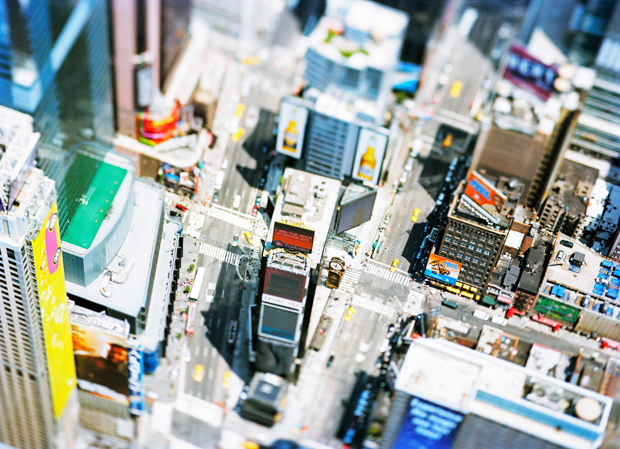 I think the chapter Excavating Modernism is very strong because it’s contemporary artists revisiting the modern movement as it exists today and most of the images we look at are from the time – from the moment when the buildings were fresh and new and offered us a golden future but that hasn’t always been the case and that can be seen for example, in the photography of Alex Hartley. He revisited some of the case study houses, the iconic residences in Los Angeles, and you see his photos and he takes you on another story. He takes you somewhere else. He approaches them from behind, he creeps up on them and suddenly it becomes disturbing the photographer is a voyeur. He’s coming across these buildings as if he’s an explorer in the jungle or a stalker. Suddenly the view is not the iconic view - it’s the view from above and behind, the debris and the detritus that you find strewn across the roof. It’s the side you’re not supposed to see. 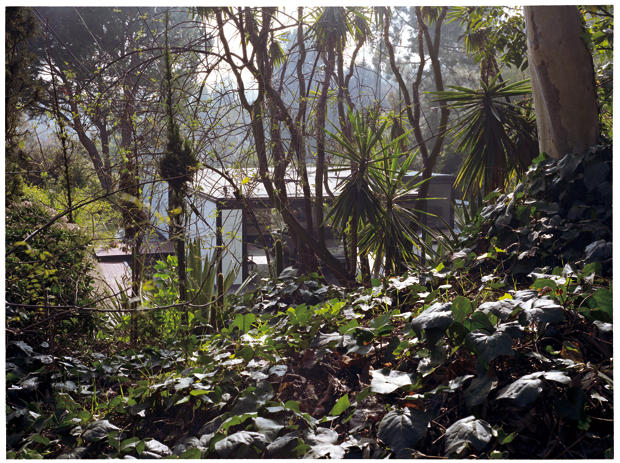 Finally we suspect you insisted on the Barbican for Constructing Worlds, the sister exhibition to the book... There is nowhere in the world I’d rather be doing it. It's the perfect place. The building itself is so iconic and so important. Whether you love or hate it demands a response. But the artistic programme in the gallery has as two of its core strands architecture and photography and is always willing to explore these subjects in new and interesting ways. So when the opportunity arose it seemed like the perfect place to do it.

More on Ten questions for writer and curator Elias Redstone 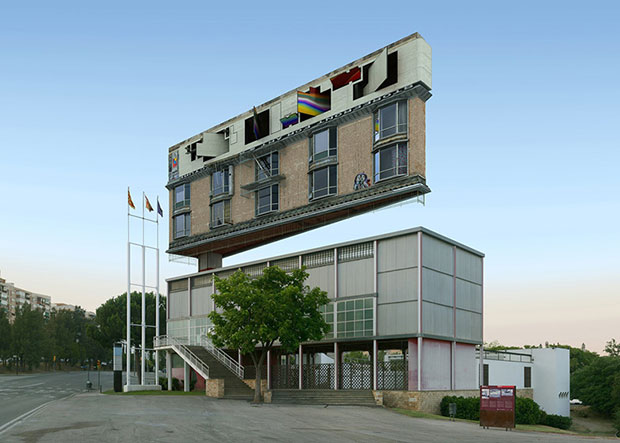 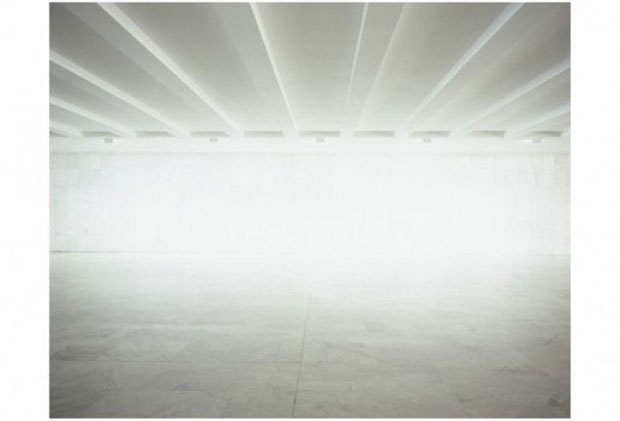 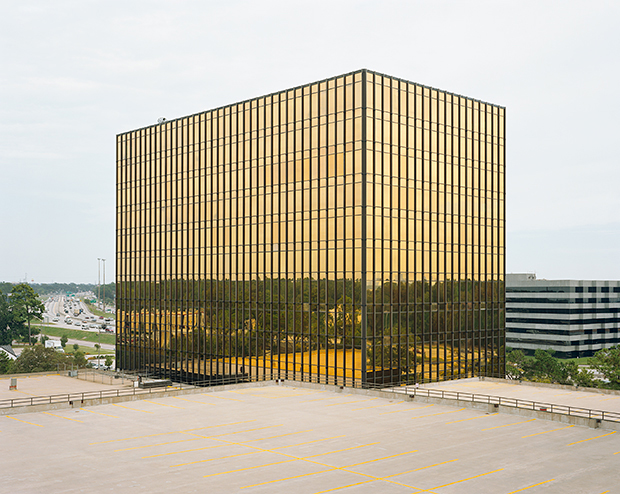 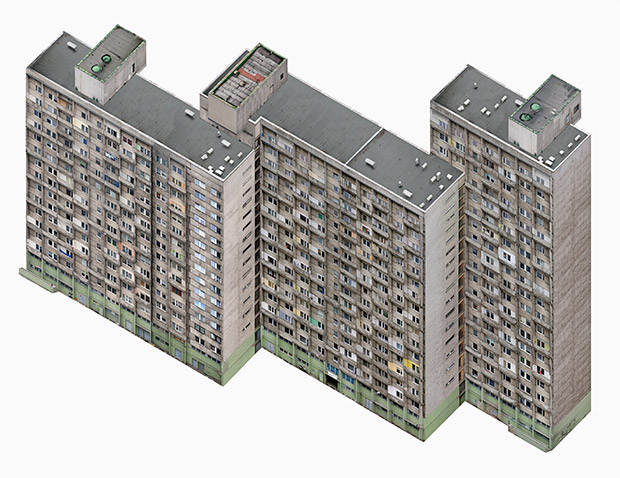 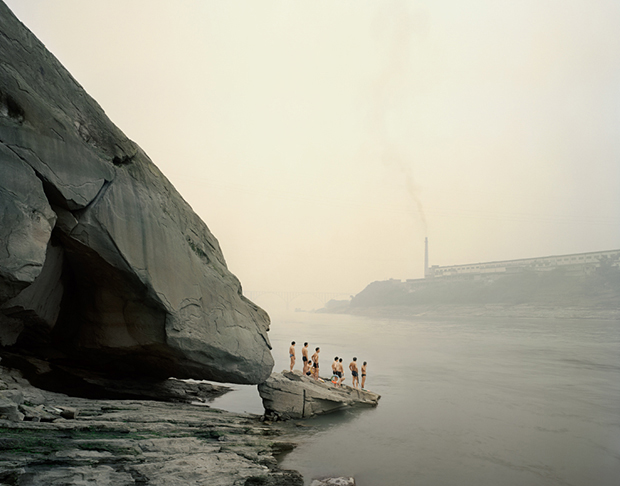 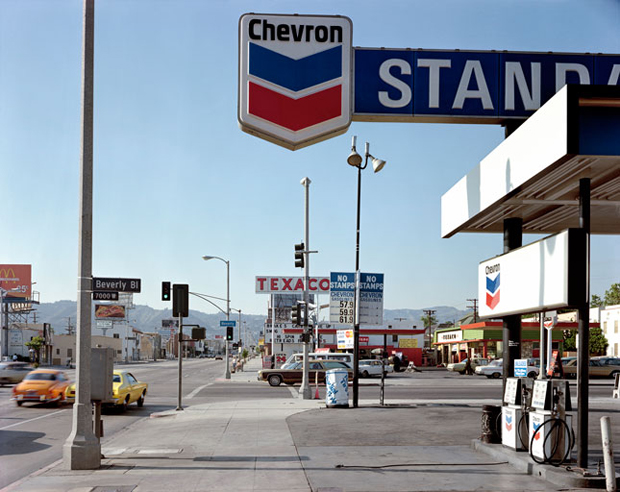 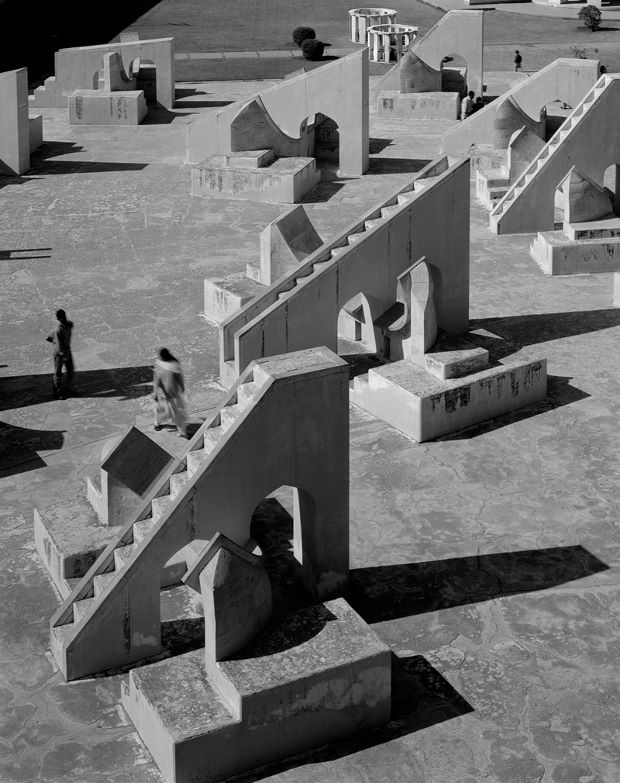 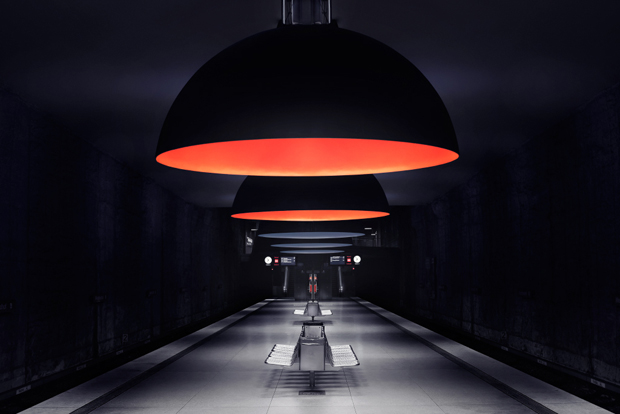 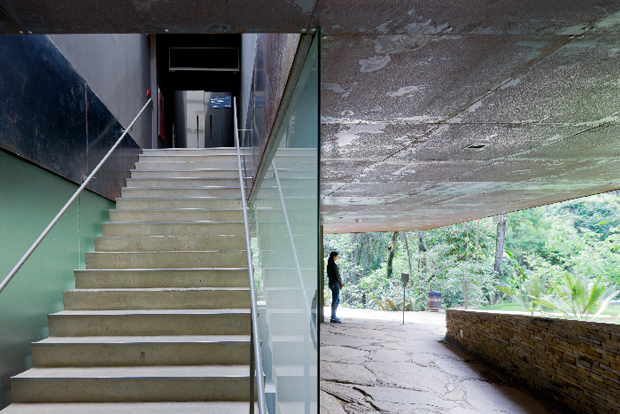