In the first of our seasonal reading series, and to coincide with the Wimbledon, tennis championships, we take a look at how Parr won the game, set and match of observational photography

“After five decades of taking pictures, Martin Parr has collected photographs with the same dedication as Roger Federer has collected trophies,” writes Sabina Jaskot-Gill, curator of photography at the National Portrait Gallery, in Match Point: Tennis by Martin Parr.

This is an impressive feat for any artist. And just as some sports fans wonder whether Federer’s dominance has made both the player and the game a little boring, so Sabina Jaskot-Gill wonders “how Parr still finds scenes to photograph that pique his interest or surprise him – he acknowledges there are ‘very few’.”

Yet, Parr, unlike Federer, remains dominant in his field. How does he do it? One tactic might be to avoid centre court. To create Match Point, Parr was given complete photographic licence to shoot at the world’s four most prestigious tennis championships: the Australian Open, Roland Garros, Wimbledon and the US Open. 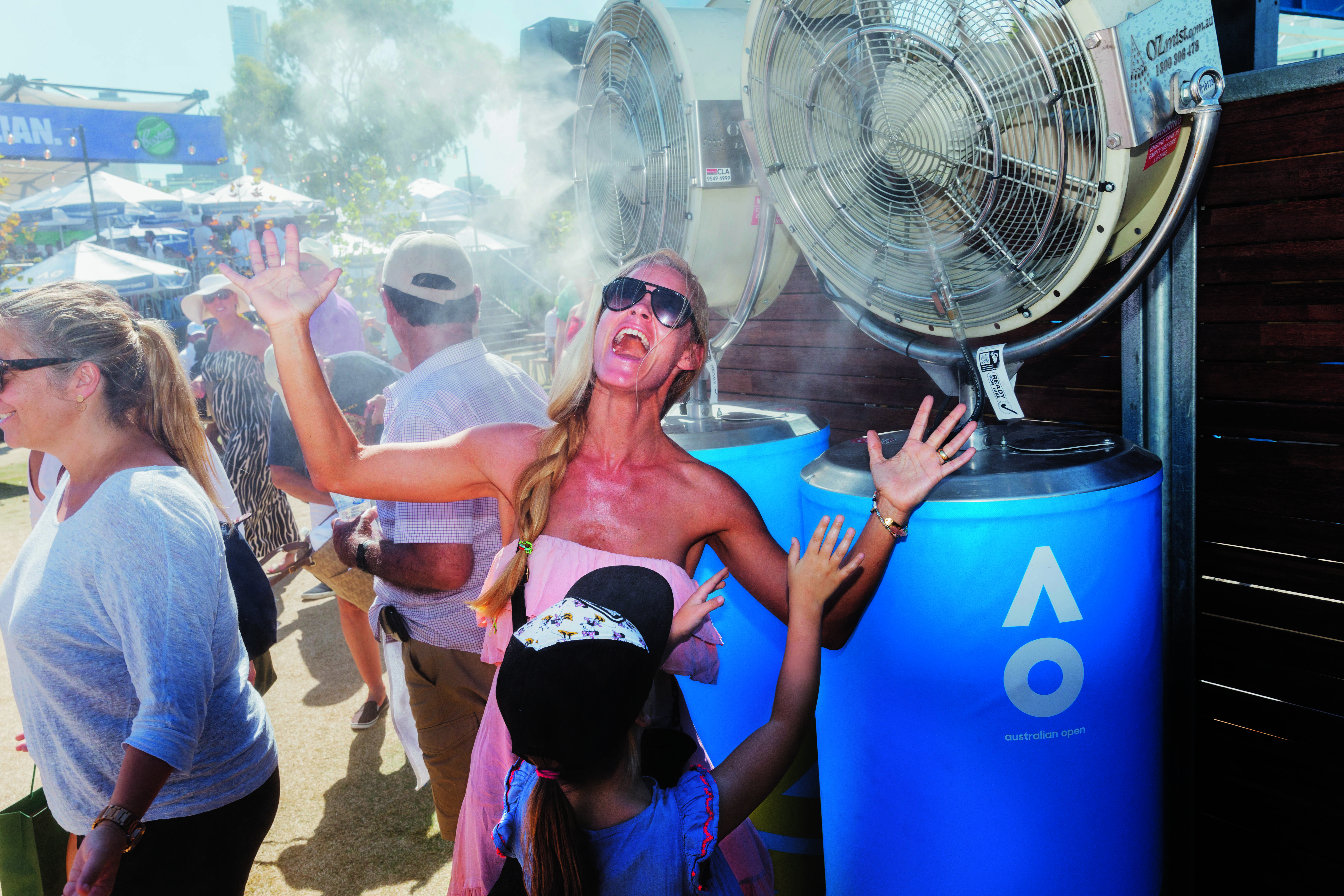 “With exclusive and almost unrestricted access to document the tournaments, one might have expected the tennis players to feature more prominently in Parr’s photographs,” writes Jaskot-Gill. “Occasionally we see them blown up to gigantic proportions on big screens or promotional boards, serving as unintentionally humorous backdrops to the banal situations unfolding before them. In one image, we see Rafael Nadal signing autographs at the US Open, but Parr’s focus is firmly fixed on the jam-packed crowd of fans, crushed behind barriers, jostling for his attention.”

Parr’s mastery lies in looking past the big event, and instead drawing focus on the strange, quotidian sights in life. “In Parr’s 2002 monograph, photographic historian Val Williams writes that this particular subject has gripped Parr throughout his career, namely ‘the strange, yet very ordinary, things we all do’” writes Jaskot-Gill. “Parr himself acquiesces with this conclusion: ‘People are my main subject matter, and ultimately people are very strange... sometimes we are complacent about how weird and surreal they are. My job as a photographer is to actually try and capture that strangeness and to bring that inherent surreality into the pictures.’ For Parr, it is everyday people – and all their behaviours, their rituals, their idiosyncrasies – that provide a constant source of fascination. His talent lies in identifying and spotting these habits, even when we don’t have the awareness to notice them ourselves. 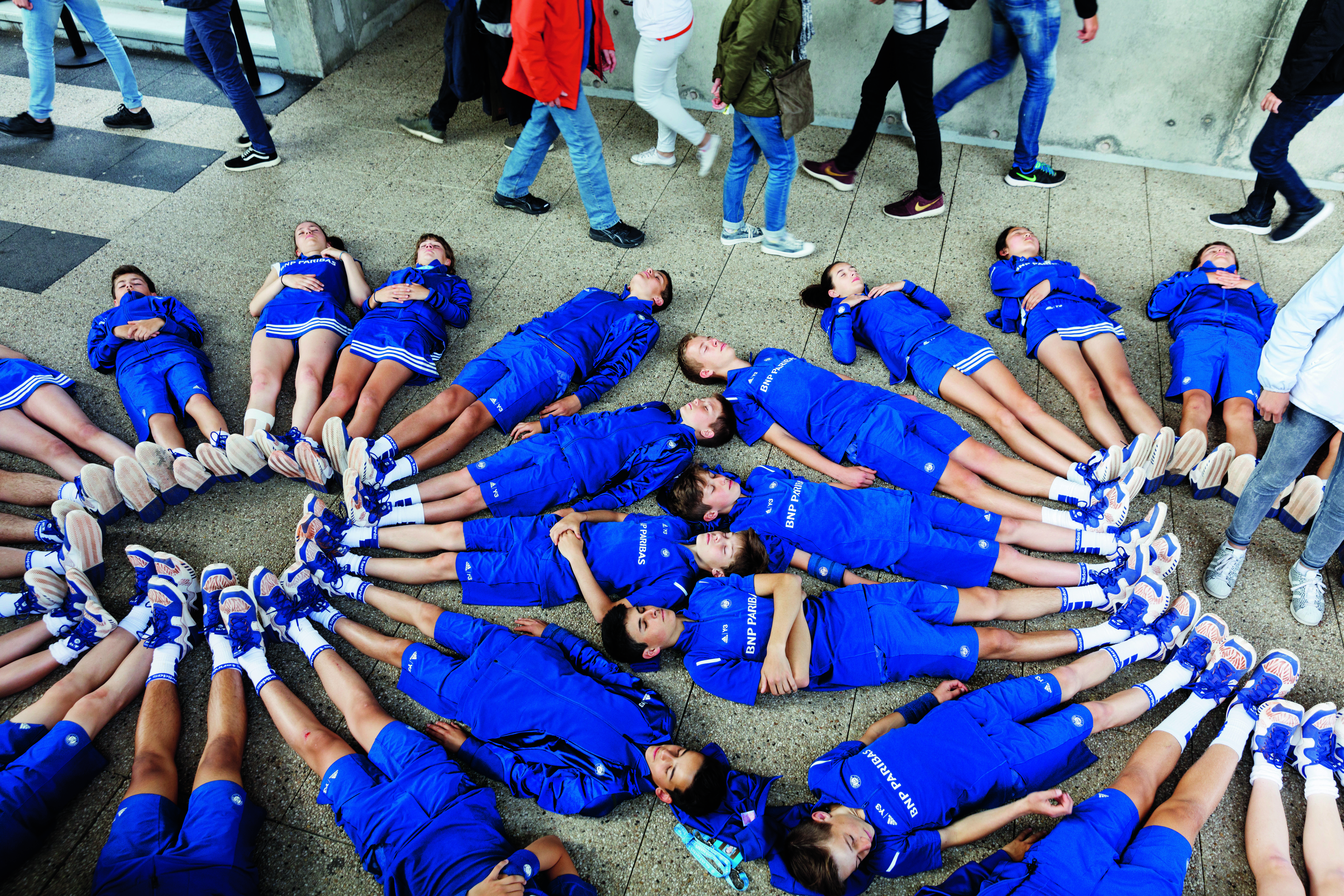 “Roland Garros is the smallest of the four ‘Slams’ but has its own Parisian flair and traditions. One photograph shows les ramasseurs de balles – the ball boys and girls – lying on the ground in their blue uniforms, their feet forming neat circles. The synchronised formation is part of a warm-up routine dutifully performed every morning. It certainly seems a bizarre scene for any spectator, and yet visitors casually walk around them without a second glance. At the Australian Open, fans brave extreme temperatures to see their favourite tennis stars in action, with Parr’s use of flash drawing attention to the heavy perspiration on their brows. 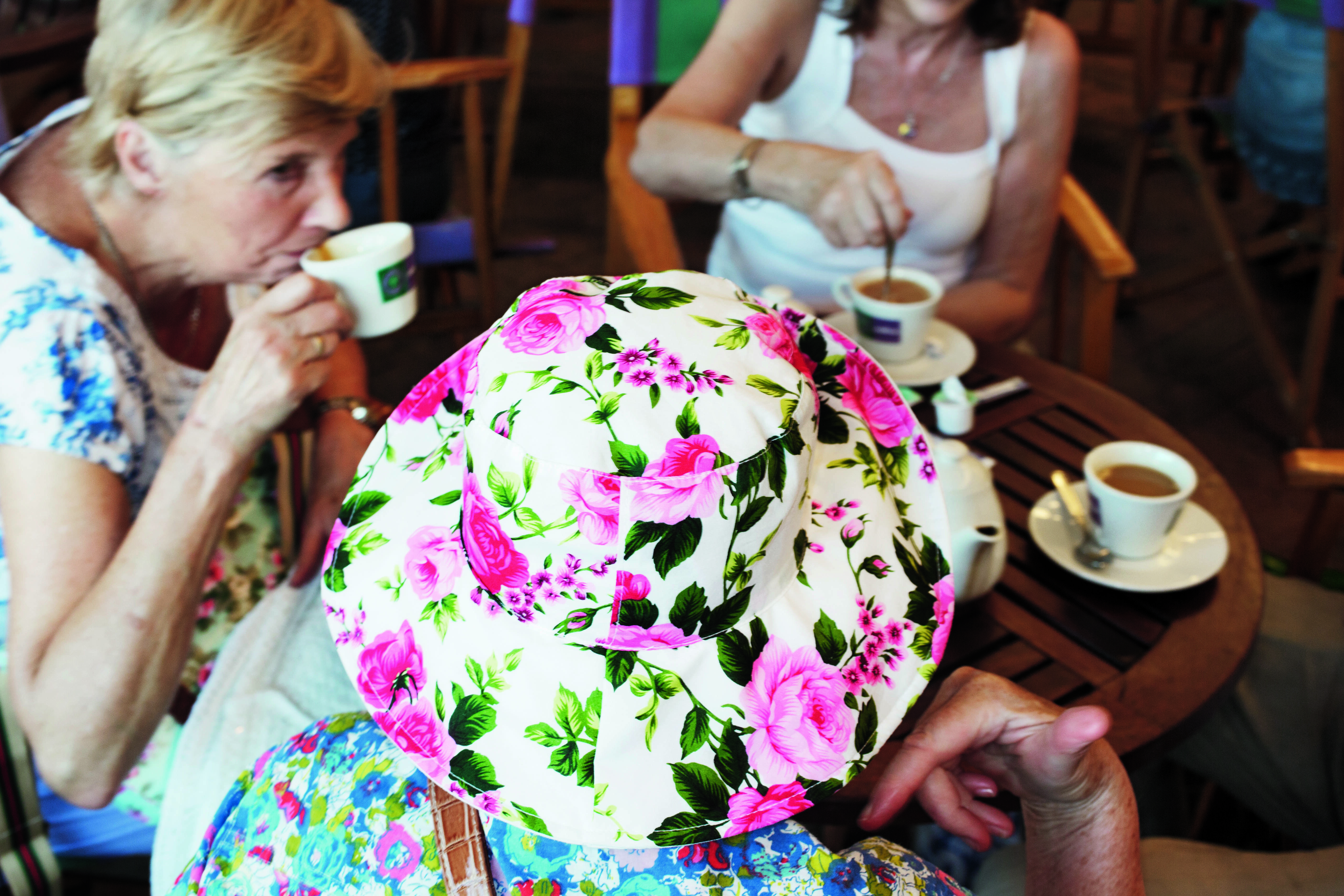 “It is a testament to their love of the sport that these fans withstand forty-degree heat, swathed in layers of protective clothing or revelling in powerful water misters, when they would be better served watching from the comfort of an air-conditioned room. Conversely, visitors to the Wimbledon Championships know to come prepared with plastic ponchos for the typical British summertime weather and all the inevitable downpours and delays to play. A sea of tarpaulin and umbrellas is a scene that greets many a spectator at the All England Lawn Tennis and Croquet Club in June. The joy of Parr’s images is that they deftly encapsulate in a single frame an experience that visitors to these tournaments will immediately recognise.

“One well-known idiosyncrasy of Wimbledon is its unique queuing system, where thousands of people (those who have not secured a ticket to the centre court through the membership lottery) patiently form an orderly line to gain admittance. ‘The Queue’, as it is known, is even accompanied by a forty-page code of conduct, and has become shorthand for ideas of British decency and fair play. Parr loves a queue and has jubilantly photographed them for decades. It’s the type of bizarre behaviour that he relishes – why would we take pleasure in standing in line for hours? Here he photographs the camping chairs, the cakes and the camaraderie, the exhaustion and the jubilation. It’s certainly a photogenic event for Parr’s camera, but he also appreciates the democracy of this tradition – anyone can get a ticket if they turn up early enough and pitch a tent.” 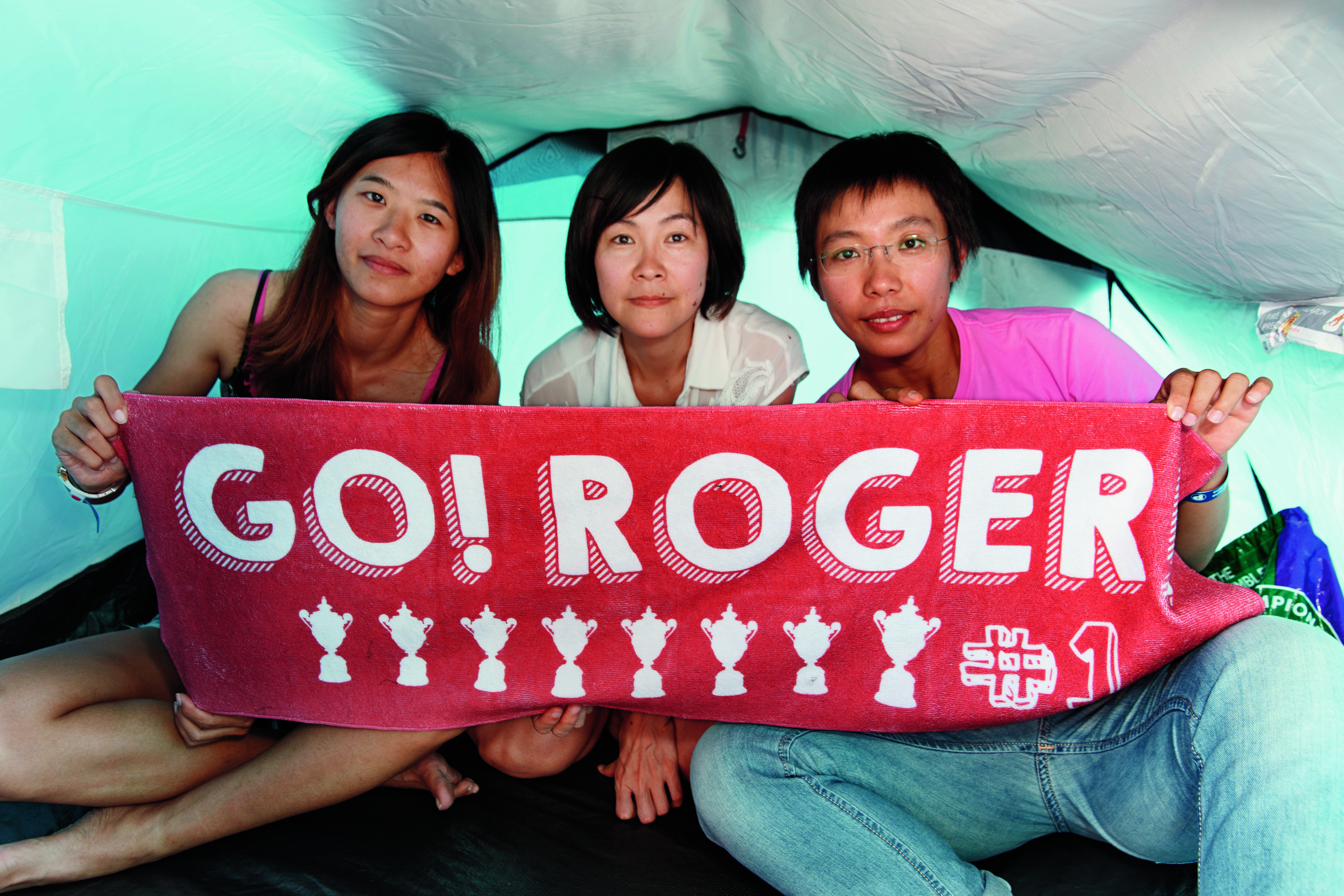 Almost anyone can shoot this scene, but the way Parr photographs it proves that, in an age of ever present cameras, not everyone can perfect his shots.

“If we are all photographers now, then what is the role of a professional such as Parr at these events? What can he capture that we amateur snappers cannot?” considers Jaskot-Gill. “Certainly, Parr shows a side of the tournaments that wouldn’t necessarily end up on an influencer’s Instagram feed. More importantly, Parr provides insights into our eccentricities, taking great pleasure in pointing out the absurdities at the heart of these prestigious tournaments and conjuring his own subjective commentary on all that he surveys.

“I’m reminded of a quote by the British artist Grayson Perry, written on the occasion of Parr’s 2019 retrospective at the National Portrait Gallery: ‘He sees our tender aspirations, our vanities, our sincere enthusiasms, our anachronistic traditions, our often unpredictable diversity – and he both ribs us and applauds us, blinded by his flash and decked in saturated colour.’”

And that’s why, for Jaskot-Gill, Parr still ranks world number one. To see more of these pictures and read more about this photographer’s work, order a copy of Match Point.

Anyone for tennis? Much loved photographer Martin Parr's unique and evocative pictures capture the spectacle of a year at the Grand Slam tournaments through 85 stunning images

Since 2014, Martin Parr, one of Britain's best-loved photographers, has been granted exclusive behind-the-scenes access to the most prestigious Grand Slam tennis tournaments - followed by over 3 million fans each year - from the Australian and French Opens to Wimbledon and the US Open.

Parr's vivid shots, sometimes poignant, often hilarious, provide a unique overview of life on and off the court, from players to picnickers, sun-hats, and visors to rain-stopped-play. With 85 photographs from a brand new body of work, many published here for the first time, this is an ace gift for all tennis fanatics, collectors, and fans of pop-culture photography.

Since the 1970s, Martin Parr's distinctive style has established his position as a leading cultural commentator on subjects ranging from consumerism and British identity to the art of the self-portrait. His insight and originality are universally admired and Parr has published over 80 photobooks, with his work having been recognized with major awards and over 100 exhibitions worldwide.

Sabina Jaskot-Gill is Curator of Photographs at the National Portrait Gallery, London. Previously, Sabina lectured on the history and theory of photography at Sotheby's Institute of Art and she has held positions at Tate, Autograph ABP and the University for the Creative Arts.

Included in the Strategist’s “Most Giftable Coffee-Table Books”

More on Summer Reads: Is Martin Parr the Roger Federer of Photography? This National Portrait Gallery curator certainly thinks so 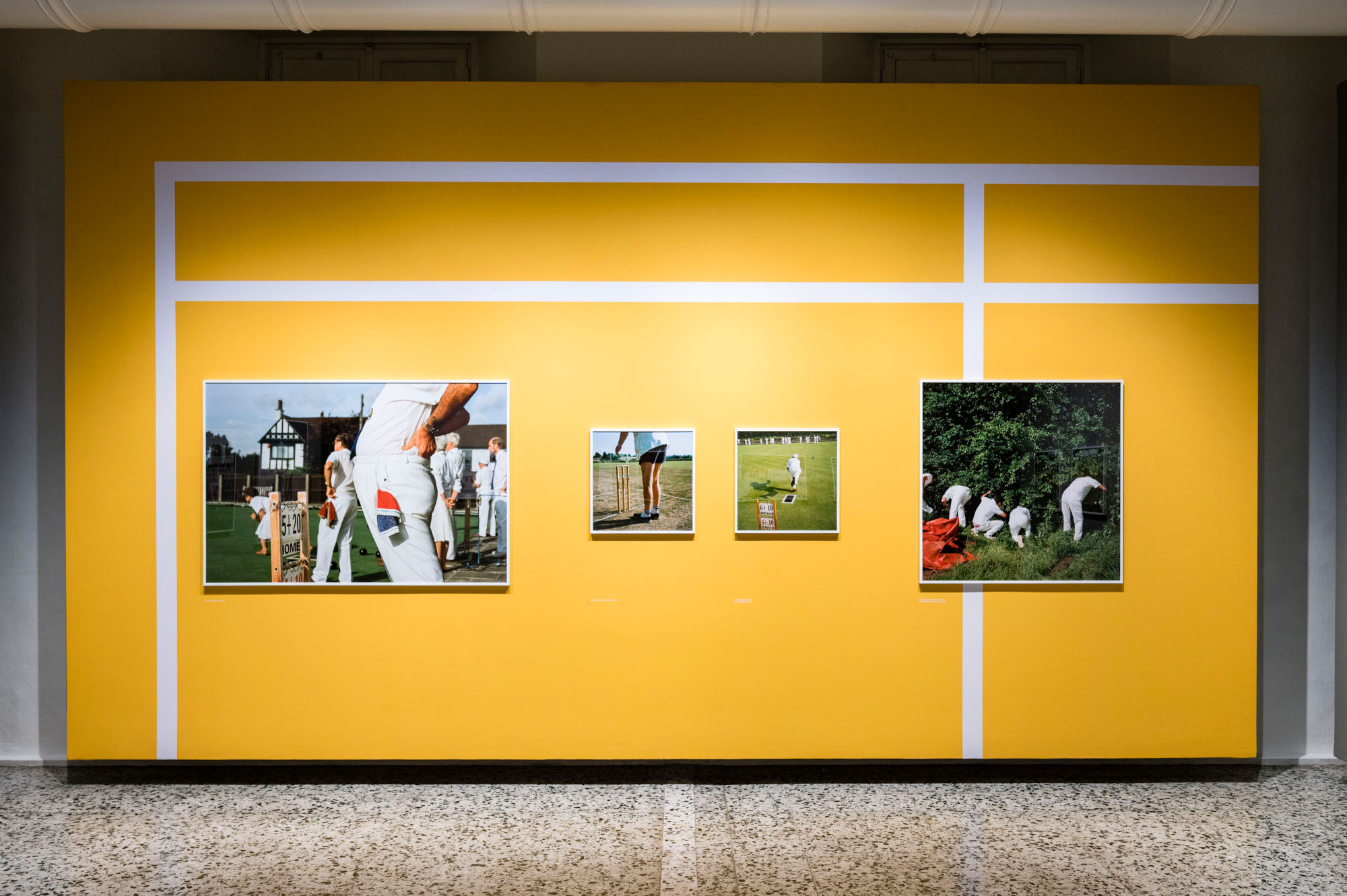