Marfa, the remote desert town in West Texas, might be small, but its cultural capital is far greater than its city limits suggest. “There are multigenerational families that were here when this was still Mexico, ranchers of European descent, artists, patrons, collectors, railroad workers, border patrol, fashion designers, builders, social workers, photographers, tomato factory workers, cultural travelers, intrepid travelers, and transient hipsters all existing in 1.6 square miles, at 'about a mile high' [elevation] with a population of 1,800 people, more or less,” writes the entrepreneur, philanthropist, restaurateur and Texas native Virginia Lebermann in our new book, Cooking in Marfa: Welcome, We’ve Been Expecting You. 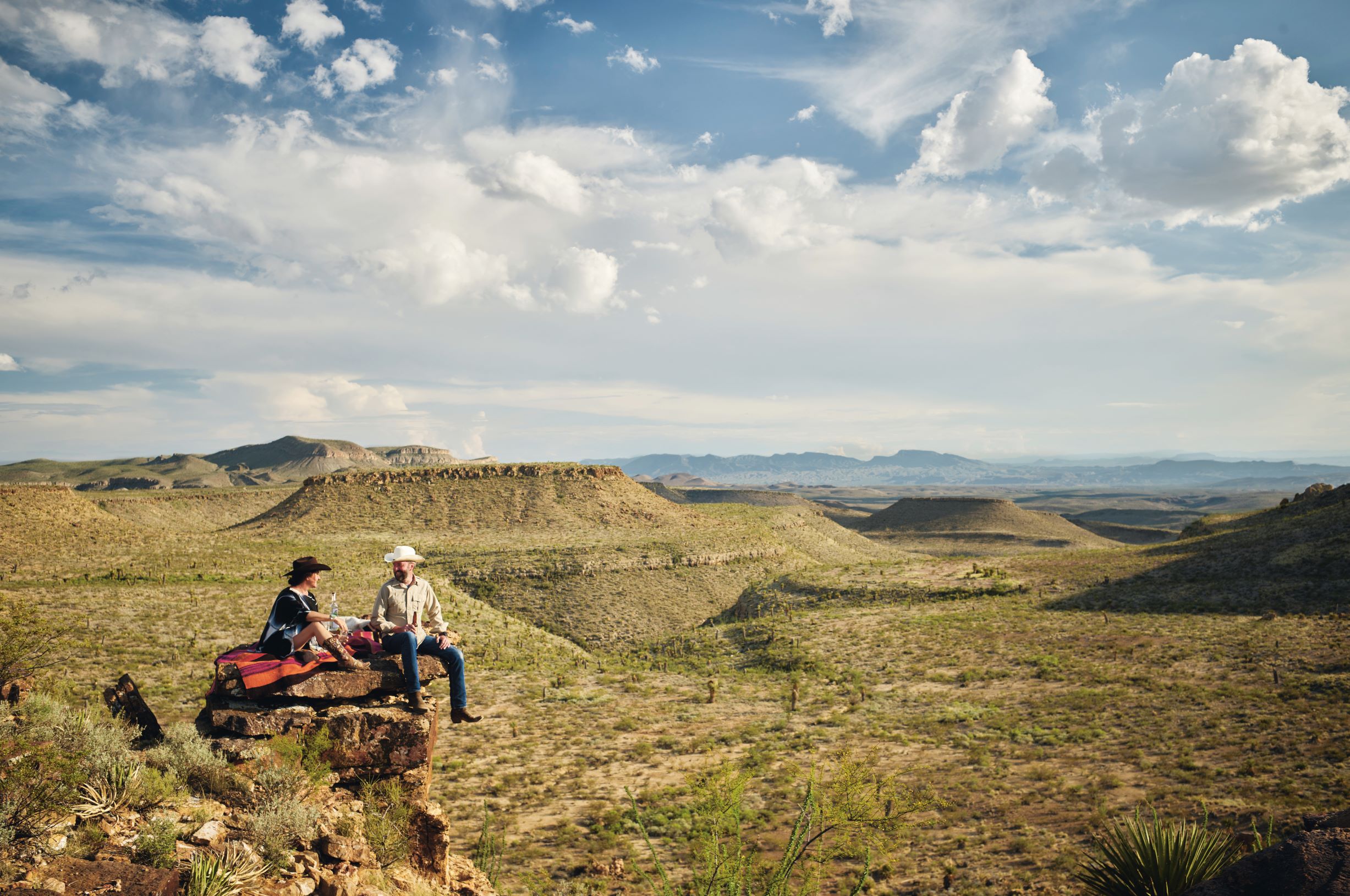 One of those 20th century arrivals changed Marfa’s reputation within the art world. In the early 1970s, the minimalist artist Donald Judd arrived in Marfa.

Judd was well known in New York, and came out West partly to find greater space. “I wanted to be in the southwest of the United States and be near Mexico,” he later explained, “and also to have room for permanent installations of my work as well as room to install works by other artists.”

He got what he wanted. “With the help of others, he created large-scale installations not only of his work, but also the work of many other artists, including Dan Flavin and John Chamberlain,” Lebermann explains. “He created the Chinati and Judd Foundations. Subsequently, since Judd’s passing, his foundations have expanded their collections to include installations by Robert Erwin, Carl Andre, and many others.” 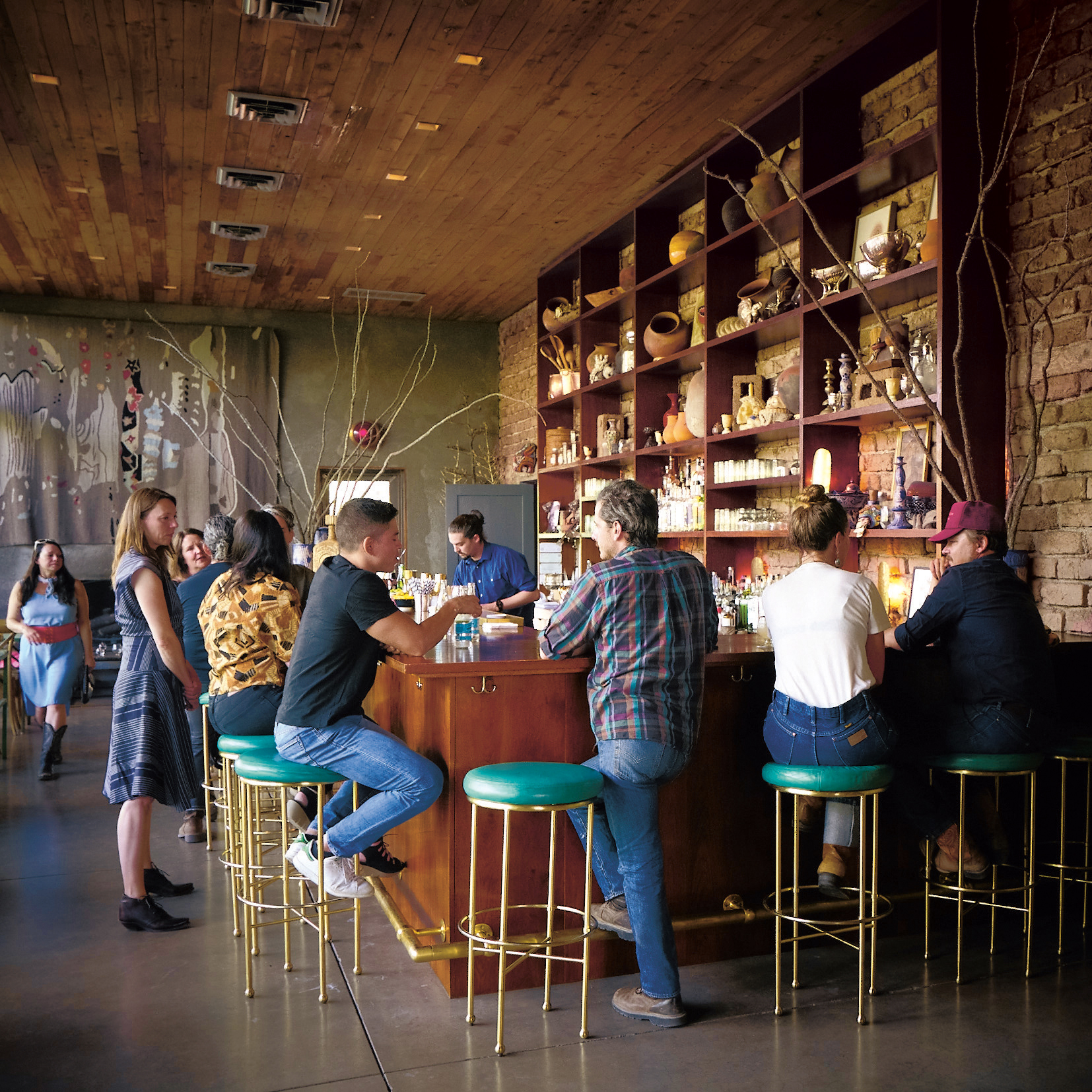 Judd died in 1994, but in both New York and Marfa, his legacy lives on. The Museum of Modern Art in New York opened its major Judd retrospective to great acclaim this week. Meanwhile, in Marfa, his influence remains palpable.

“Donald Judd’s story marks the beginning of Marfa being recognized as one of the most relevant art pilgrimages on the planet,” writes Lebermann. “People arrive every day of the week and most usually leave two-to-four days later. A striking number of those people are artists, filmmakers, writers, musicians, collectors, and curators.” 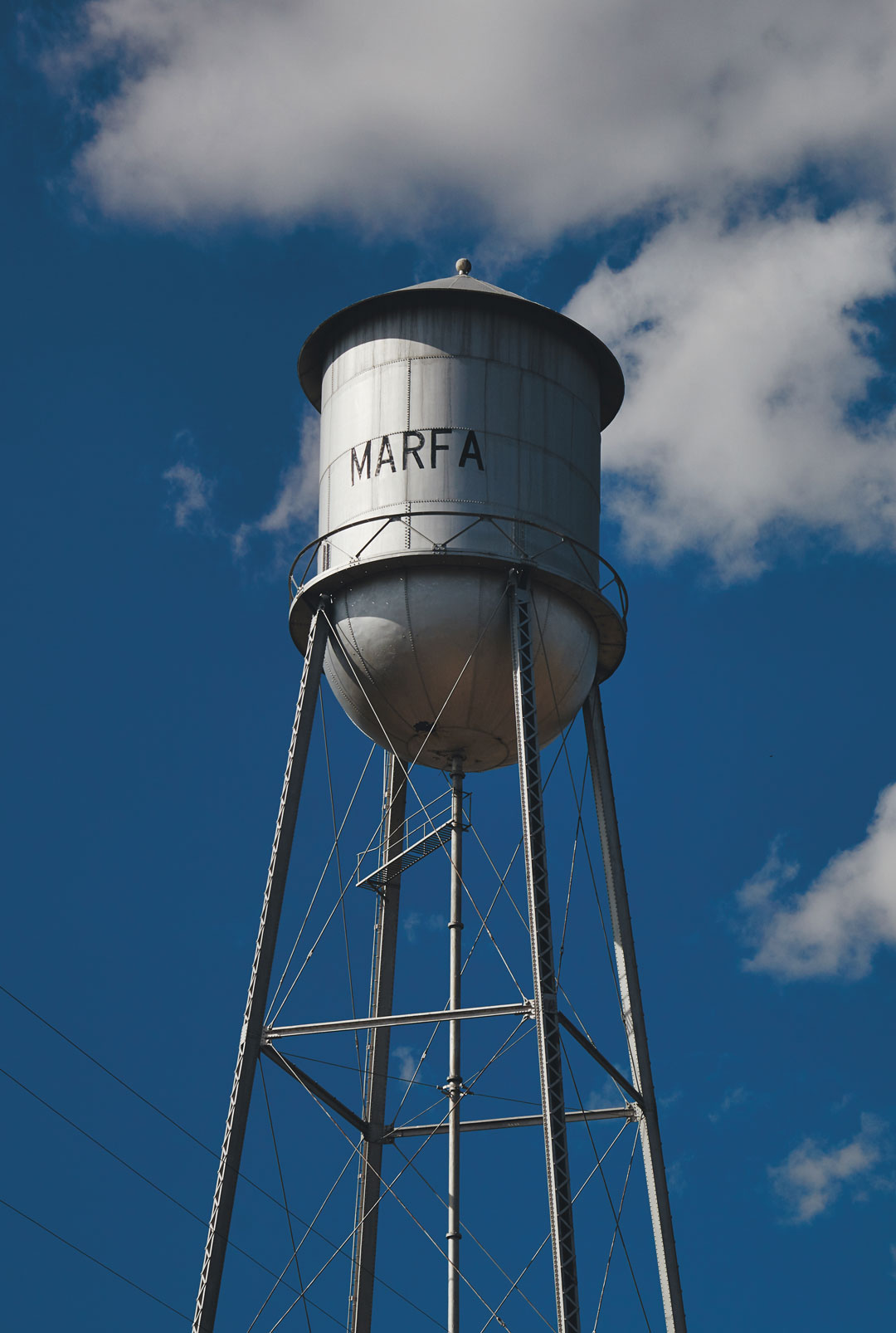 However, Lebermann herself was not lured to Marfa by Judd’s reputation. She is from a family of ranchers who have been in Texas for more than 100 years. But she’s experienced the Judd effect, as co-founder of arts organization Ballroom Marfa, as the co-owner of The Capri, Marfa’s world-renowned restaurant, and The Thunderbird Hotel.

“The building that houses the Capri was originally a World War II army airfield hangar,” she writes in the book. “In the 1940s, the airfield in Marfa was closed and the hangars sold off and moved to town by their new owners. To my knowledge, there are just three of these repurposed adobe and steel hangars in Marfa: The Capri, and two on The Block, the Judd Foundation property.” 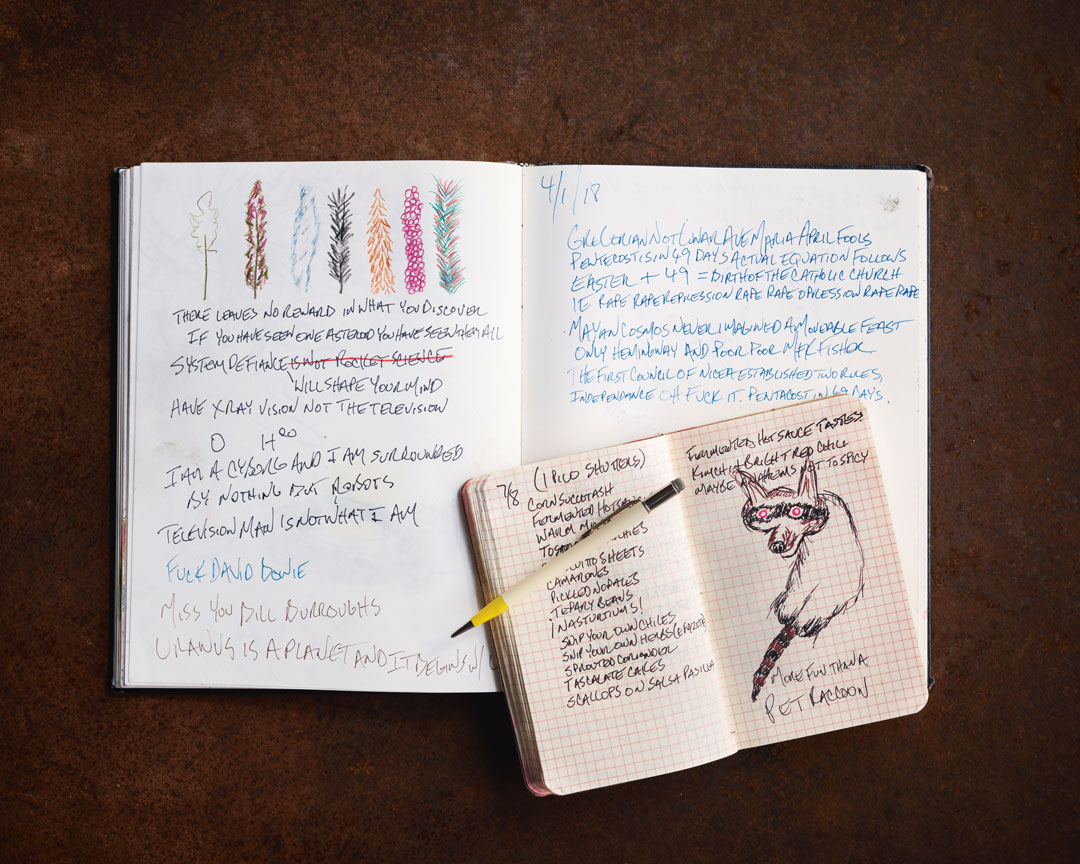 Then there are the creatives places such as The Capri can pull in. The rock band Sonic Youth played the restaurant back in 2007, when it was more or less a building site, at an event that, as Lebermann says, “was a collaboration between Ballroom and Donald Judd’s Chinati Foundation.” The artsy vibes also lured in The Capri’s chef, Rocky Barnette, who also went on to become Lebermann’s husband.

“You fall in love with the seeming dusty simplicity of the town, the ranchers, the Latino culture and proximity to Mexico, and the faint whiff of learnedness, academia, and artistic freedom blowing in the forty mile per hour breeze,” says Barnette of his early impressions of the place. “That’s when you start looking at real estate.” 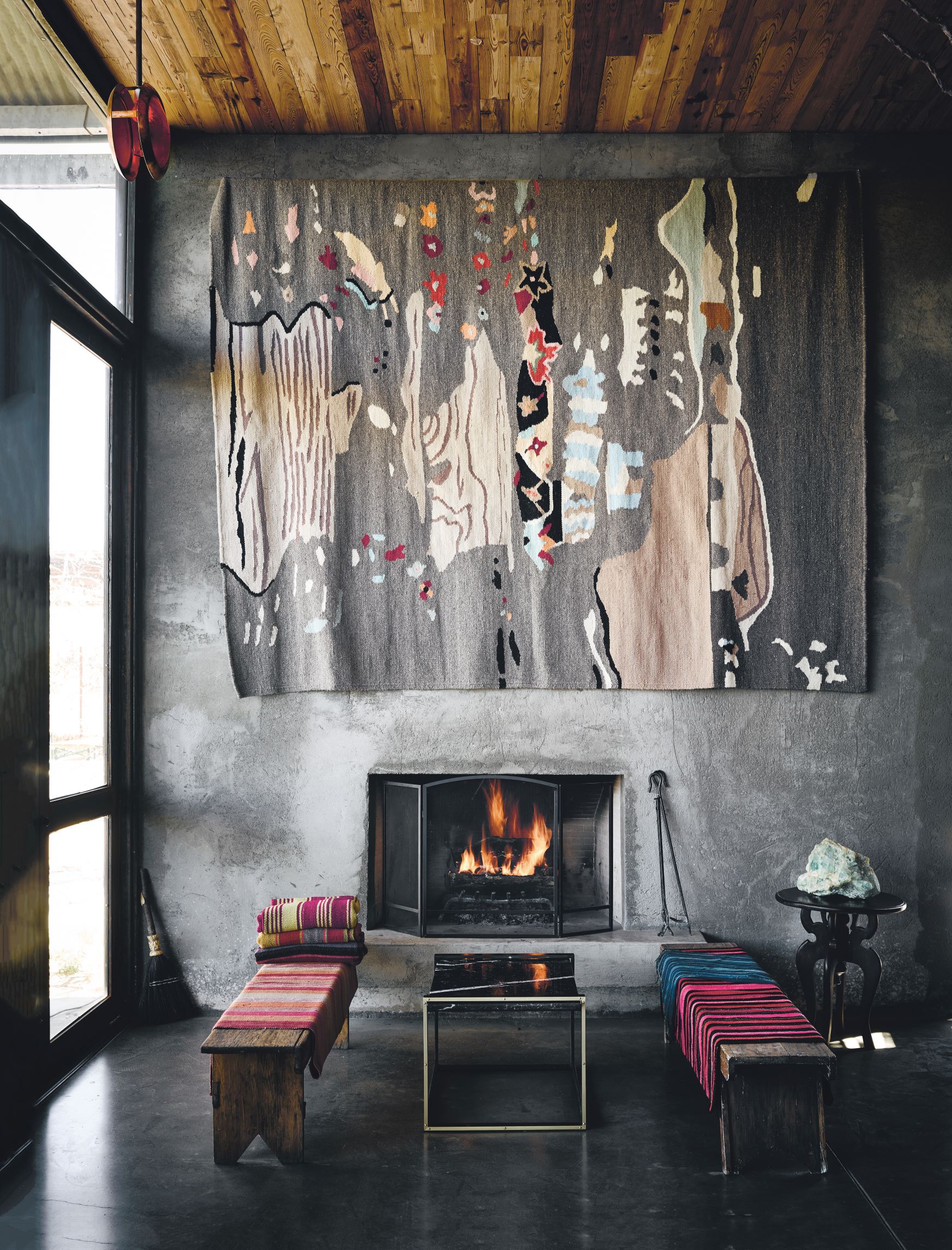 And even that real estate – particularly the ex-military architecture of The Capri - retains certain resonances with Judd’s work and institutional properties, while its interior – styled by the cinema set designer Sean Daly (who worked on the film, Sherlock Holmes, starring Robert Downey Jr.) – chimes with the region’s artsy crowd.

Barnette’s culinary sense of the place, keys into aspects of the desert climate Judd appreciated too. The chef draws heavily on local, foraged ingredients, such as prickly pears, Mexican tarragon and marigold flowers. As Barnette puts it, “a lack of options clears the mind.” 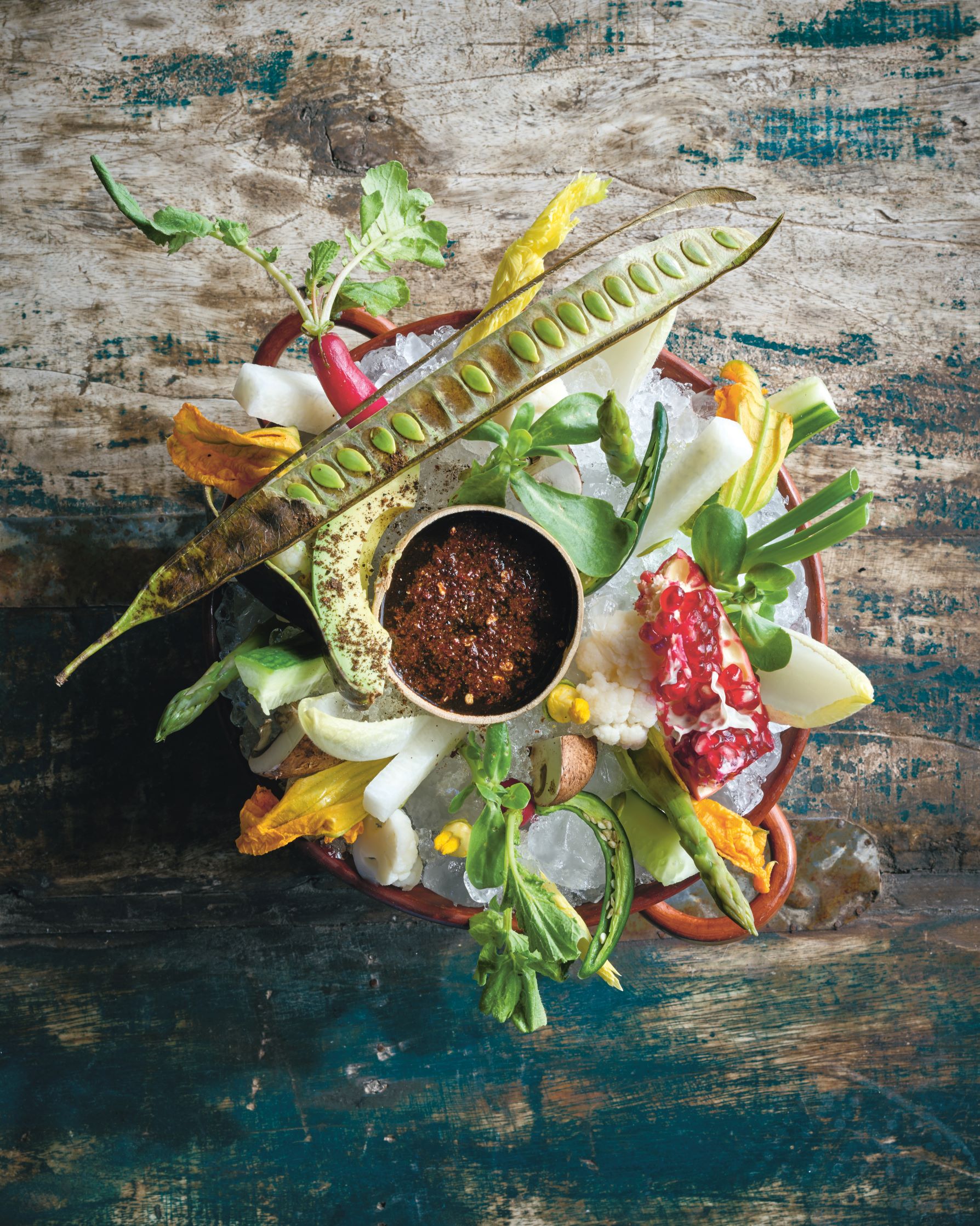 It is, indeed, the perfect cuisine for the small, spacious town Judd helped put on the map. “That sense of place lends context to the artworks installed here,” Barnette writes. “When you place Judd’s work or even the work of younger artists in this broader cultural context of landscape and border, one can begin to understand the magnitude of this regional enclave. It is no longer a mystery why this island of high art exists in what people call the middle of nowhere. This same vista, this same experience, can provide a platform for understanding the food and historical culinary inspirations of the Capri as well.” 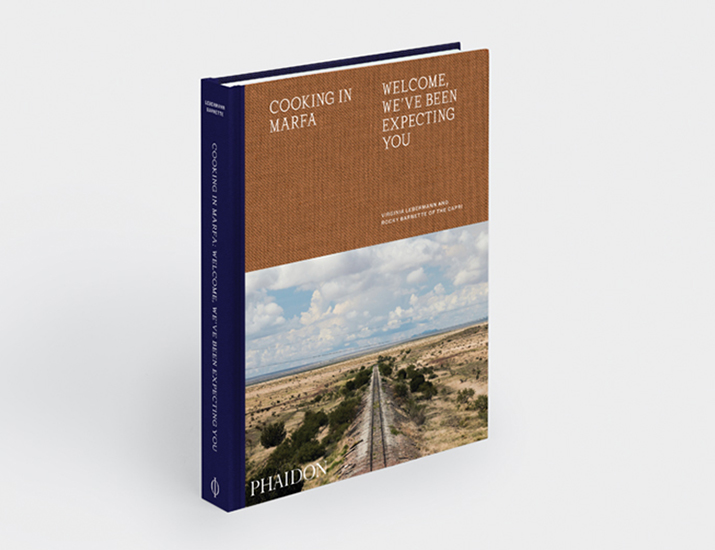 Cooking in Marfa: Welcome, We’ve Been Expecting You.

For more of those culinary inspirations, and plenty of great recipes, order a copy of Cooking in Marfa: Welcome, We’ve Been Expecting You.

Cooking in Marfa : Welcome, We've Been Expecting You Virginia Lebermann and Rocky Barnette of The Capri

A treasure trove of essays, recipes, and images exploring the people and food of Marfa and its premier restaurant, The Capri

Cooking in Marfa introduces an unusual small town in the West Texas desert and, within it, a fine-dining oasis in a most unlikely place. The Capri excels at serving the spectrum of guests that Marfa draws, from locals and ranchers to artists, museum-board members, and discerning tourists. Featuring more than 80 recipes inspired by local products, this is the story of this unique community told through the lens of food, sharing the cuisine and characters that make The Capri a destination unto itself.

Virginia Lebermann is from a family of ranchers who have been in Texas for more than 100 years. She co-founded the arts organization Ballroom Marfa, and co-owns the Thunderbird Hotel and The Capri.

Rocky Barnette is the chef and co-owner of The Capri. He was raised in North Carolina, and worked at the three Michelin-starred Inn at Little Washington in Washington, Virginia, for almost a decade before relocating to Marfa.

"Like Marfa itself, this West Texas cookbook is ambitious [and] beautiful." —Wall Street Journal

"A selection of essays, recipes, and images, embodies Marfa's eclectic modernism through the lens of food."—Galerie

"In this collection of 80 recipes... The authors impart their enthusiasm for local flavors." —Publishers Weekly

"Cooking in Marfa takes a deep dive into [the town's] food and entertaining traditions."—The Local Palate

"Cooking in Marfa: Welcome, We've Been Expecting You is half recipes, half visual homage to the rolling plains and stark desert landscape that envelopes this remote, creative oasis." —Vogue Online

"This new book offers an intimate look at the many facets that make the small town special." —Forbes.com

"Ever since American artists Donald Judd opened his foundation here in the 1980s, the Texan desert city of Marfa has been a mecca for art lovers. But in recent years it has made a foodie name for itself, mostly thanks to The Capri and its menu of avant-garde Mexican-inflected fare such as tempura-fried yucca blossoms and prickly-pear wine. In this new book, the restaurant's recipes are combined with essays and photographs to evoke the taste of the desert at home." —The Financial Times HOW TO SPEND IT

"A new book, Cooking in Marfa, celebrates a town that's an unlikely haven of art and fine fining in the Texas desert." —Lonely Planet magazine

"Cooking in Marfa offers an intimate look at the many facets that make the small town special." —Forbes

"Beautifully photographed ... This is as much an inviting cookbook as it is an artful keepsake." —Publishers Weekly

"A sophisticated treatise on highbrow dining in art-obsessed desert Shangri-La that is Marfa." —The Houston Chronicle

"The tome is a shrine to so many who make the pilgrimage [to Marfa]." —Dujour

"Barnette's cooking is the ultimate expression of contemporary Tex-Mex... although many of the recipes reflect the site-specific nature of the Capri's menu, it doesn't mean they aren't achievable for UK-based chefs... The story of Capri and the people behind it makes for fascinating and inspiring reading." —The Caterer

"This new book offers an intimate look at the many facets that make the small town special. The tome is a shrine to so many who make the pilgrimage here." —DuJour

"The cookbook features more than 80 recipes for dishes and cocktails, interspersed with essays and photographs that capture the challenges and blessings of living in such a dry, dramatic environment." —Travel + Leisure

"We wanted to tell the story of our unique town, landscape, and proximity to the border. All of these elements requires a narrative in order to show their connection to the significance and soul of the food and the design."—Modern Luxury Interiors Texas 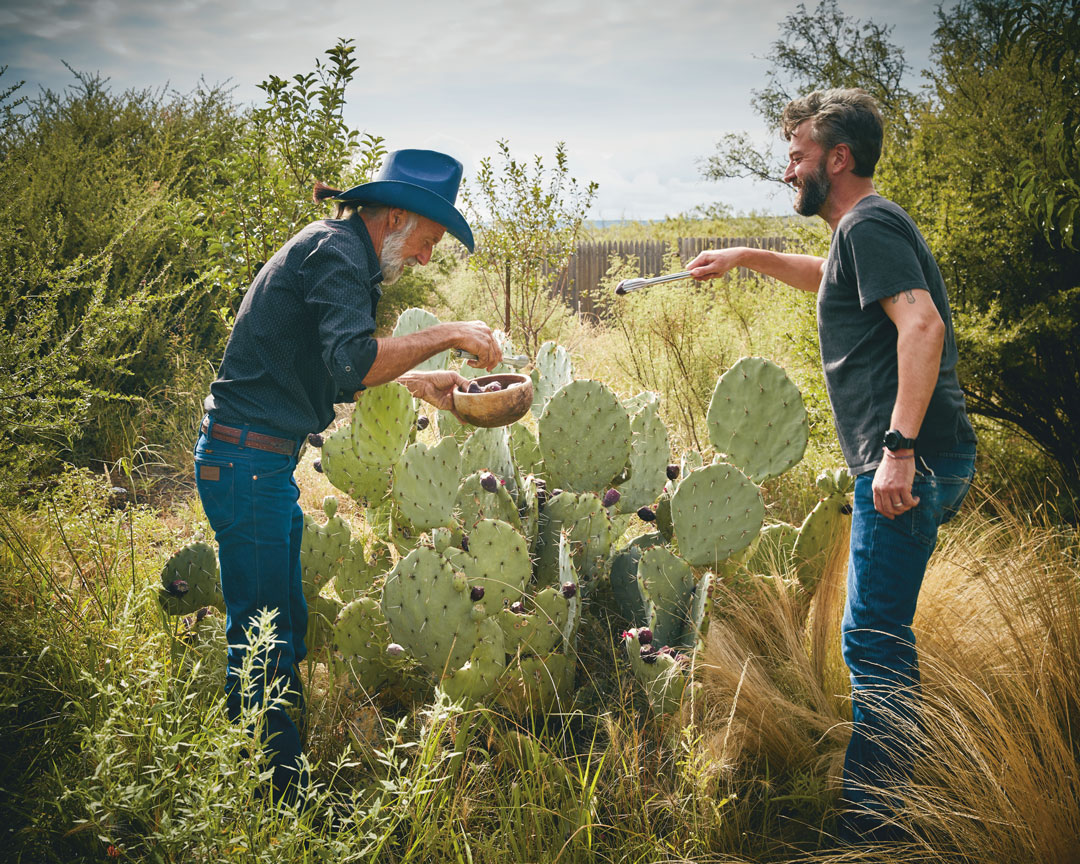 Think you can’t forage in the desert? Think again! 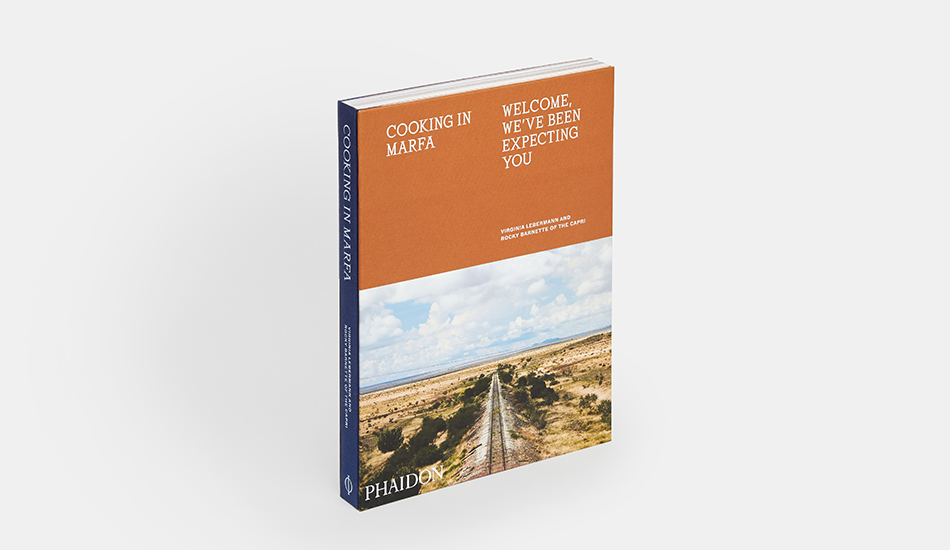 All you need to know about Cooking in Marfa