New nipped-in design is the result of a 16-step procedure (but there's .7 ounces less beer)

“The world’s most iconic beer brand deserves the world’s most unique and innovative can. I think we have it here.” So says, Pat McGauley of Budweiser’s new can shape. He’s vice president of innovation for Bud’s parent company Anheuser-Busch, and he’s mostly responsible for the can’s redesign, which will make an appearance in the US next week.

This is no tweaking of the graphics – as is usually the case - but a structural change to the container. It has taken three years to perfect, as aluminium is a metal that’s resistant to change, and if it’s pushed or pulled too far it will fracture.

With its 10-degree indentation, the can looks as if it’s half way to being crushed, as it’s squeezed in around its middle. Bud dubs this its ‘bowtie shape’, an attempt to mimic the brand’s famous bowtie logo. “We explored various shapes that would be distinguishable in the marketplace, but also viable from an engineering standpoint,” explains McGauley.

And it was a long and tortuous process to perfect the ‘nipped-in’ shape, needing “major equipment investments” at the beer’s can-making plant in Newburgh, NY, says the company. Because it’s a 16-step procedure to achieve that waistline – ten for the bottom half of the can and six for the top half. 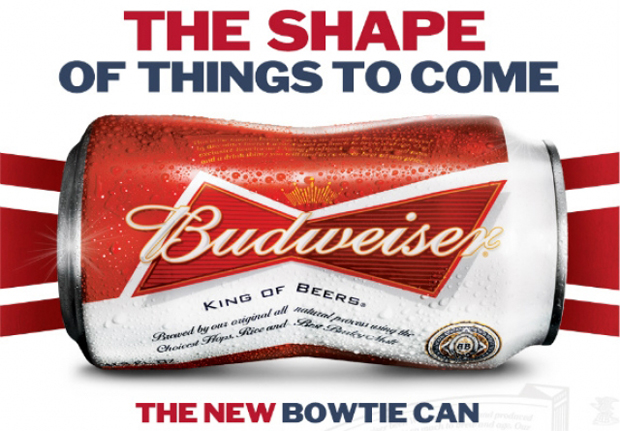 For FMCG’s – that’s fast moving consumer goods – an iconic pack shape can have more impact than some flashy graphics. Coca-Cola remembered this as it painstakingly evolved its iconic bottle shape, while Sunpat forgot it when it dropped its highly-recognisable broad-shouldered jar in favour of something more generic.

But Bud fans beware, the crinkle comes at a cost. The new 11.3-ounce can contains .7 ounces less beer than a standard 12-ounce can. Though in packaging terms, it takes twice as much aluminium as normal cans. This might seem as a reckless misuse of the earth’s resources – though it is, of course, recyclable. But McGauley at Anheuser-Busch doesn’t pitch it quite like that. “It does have twice the aluminium in it, but we like that a lot. It feels sturdy and high quality.” Decide for youself when it goes on sale from May 6. For more innovative ways of packaging, branding and selling products with heritage, check out Michael Johnson's Problem Solved.

A primer in design and communication that offers solutions to the recurring problems faced by by students and professionals. It explores the ways creatives interpret their clients' brief, propose new ideas and reinvent existing products and brands, referring to a huge cross-section of different projects by acclaimed designers and agencies, including Saatchi and Saatchi, Paul Rand, George Lois, Bob Gill and Pentagram. Specifications:

Michael Johnson is the award-winning creative director and founder of johnson banks, a London-based design consultancy recognised as one of the most innovative design companies in the world and whose clients include Virgin Atlantic, the British Government, the V&A, the Design council and Proctor & Gamble. He writes and lectures worldwide on design theory and practice.

"Students and professionals alike will enjoy this primer for its engaging text and the wealth of imagery used to illustrate points."—Artichoke, Australia

"For once we have a graphics book that isn't just a parade of stunning imagery - impressive though its visual content is. A challenging theory underpins each wittily titled chapter, promoting brave and contentious ideas. It also pushes the importance of words in communication - a rare treat from a serious graphics tome."—Design Week

"A real tour de force. It covers an amazing amount of projects (and problems) and Johnson tackles them in an unpretentious and erudite way.' 'filled with excellent examples and presented in an attractive and thoughtful way."—Grafik

"In these days of graphics gurus and superstar admen, Michael Johnson provides a welcome reminder that the lifeblood of design and advertising remains solving some else's communication problem, and doing so elegantly and effectively. An entertaining and through primer which should find favour with students and established practitioners alike."—Creative Review

"or once we have a graphics book that isn't just a parade of stunning imagery - impressive though its visual content is. A challenging theory underpins each wittily titled chapter, promoting brave and contentious ideas. It also pushes the importance of words in communication - a rare treat from a serious graphics tome."—Design Week

"Not just an important textbook, but an ode to creative intelligence."—Magma

"Problem Solved articulates 18 design problems, many of which communicators typically will encounter of the course of their careers. In each category, visual examples demonstrate how some of the greatest graphic designers and advertising art directors of the 20th century addressed them... As a survey of outstanding 20th-century communications, this book is very successful."—Azure

"Problem Solved is 288 pages of visual history and erudite commentary that, for working designers and visual aesthetes alike, will be an enlightening exploration of design’s central quandaries... Johnson examines his examples in a manner that is fresh and illuminating. He does a lovely job of tying together design, history, and aesthetic concerns into one neat bundle."—Print