"George Dyer features in Fancis Bacon’s celebrations of the male body and its sexual appeal” writes Martin Hammer, referring to the great artist's monumental triptychs of 1964  and 1970, in our Phaidon Focus edition on the artist. Some of these Dyer portraits, Hammer writes, “can be seen as a masculine variant on the subject of the toilette. In other works, Dyer is riding his bicycle or sporting only underpants, which seem to cast him as ordinary to the point of slight absurdity. The light-hearted tone of such scenes may capture a phase of unusual serenity in Bacon’s private life.”

This serenity came via an unlikely source. Bacon met Dyer in 1963, when Dyer, an East End career criminal, attempted to burgle the artist’s Kensington mews house. The couple became lovers, and Dyer served as Bacon’s muse for the rest of the decade. However, as Hammer explains, the couple’s relationship had its difficulties, and in 1971, Dyer took his own life, the night before Bacon’s retrospective at Paris’s Grand Palais.

“The large retrospective at the Grand Palais in Paris is a great honour for a living artist, especially a British one, and for Bacon a crowning moment in his career. Dyer’s suicide on the eve of the opening, in their hotel, prompted a remarkable sequence of memorial triptychs over the next three years.” 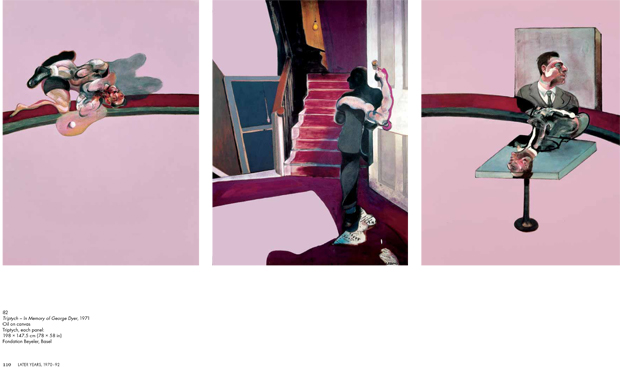 Triptych – In Memory of George Dyer, 1971 - Francis Bacon - a page from the Phaidon Focus book

Now a triptych from 1964, Three Studies for Portrait of George Dyer (on Light Ground) ,which formed part of the Grand Palais retrospective, is up for auction for the first time, at Sotheby’s London auction house, at the end of this month.

The work, which forms part of Sotheby’s contemporary art evening auction on 30 June, is conservatively estimated to sell between £15,000,000 and £20,000,000. It was originally bought by a private collector from Galleria Galatea, in Turin back in 1971, and has not been shown since this first sale.

“It is incredibly exciting," says Oliver Barker, Sotheby's senior international specialist in contemporary art. "Dyer was one of the great loves of Bacon's life and this is the first time a triptych of him has ever come to market. The first time I saw it was like uncovering a long lost jewel.” The rarity of the work is key to its sale price, as Bacon destroyed many of the works he found dissatisfying. However, in Barker’s opinion, in terms of the painterly qualities, these studies are flawless.

"There is not one weak panel here, each one is a 10 out of 10," he told The Guardian. "It is very exciting because it is an incredibly rare thing, I think it is one of his greatest small triptychs." Barker believes the work, “marks both the height of Bacon's affair with Dyer and the zenith of his achievement in portraiture"  To view the work prior to the sale visit Sotheby’s 27 – 30 June.

You may be interested to know that we have an incredible introduction to the life and work of Francis Bacon as part of our popular Focus series of books. The Phaidon Focus series is designed as a lively, authorititive and accessible introduction to the work of the artists featured in the series. As the title suggests, each features special Focus sections that explore specific and important themes, series, pieces or events in each artist's career, so whether you're new to the artist or you already know a little you'll come away more enlightened, entertained and cerebrally nourished. Other artists featured in the series include among other: Joseph Beuys, Cindy Sherman, Andy Warhol and Georgia O'Keeffe. Check them out in the store.

More on Unseen since 1970 Bacon tryptych up for sale