There's a nice passage in our Simon Starling book where the artist describes putting together work about Berlin. Part of the piece involved recreating a glass screen made by the 20th century Berlin designer Lilly Reich. Starling says he took his plans to a metalwork firm in the city, only to discover that they had made much of Reich's original works, decades earlier. "So that quickly sparked off an idea into my head," he explained "and I eventually managed to get them (the metalwork firm) to open up their huge archive and go digging in there, to piece together the incredible relationship they have to Berlin and its history and politics." 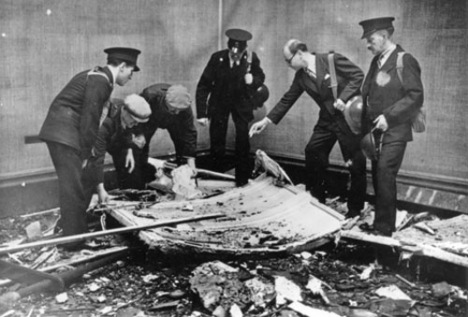 Tate Director John Rothenstein with Tate staff surveying the damage caused by a bomb which hit the Gallery on 16 September 1940. Image courtesy of The Tate

This intuitive, explorative practice, relying heavily on a back story, seems typical of the 45-year-old artist. Starling may have chanced upon the remote shed on the banks of the Rhine that served as the basis of his Turner-Prize winning work, Shedboatshed (2005), on an idle cycle ride, yet the work remains a powerful meditation on the nature of industry, nature, technology and economics. So, what can we draw from Starling's Tate Britain commission? This piece required a little archival digging too, as the annual commission for The Tate's Duveen Galleries, requires the chosen artist to include both some of their own new work, and existing pieces from the Tate collection.

As the artist has explained, the title of the exhibition, Phantom Ride, is taken from the phrase early cinema-goers used to describe the fun, simple films, often shot from the front of a moving train or car. "You would sit in a cinema and watch the world go by. It was an amusement, like going on a rollercoaster," Starling says.

Phantom Ride is no harmless train trip, though; the inspiration behind Starling's show began with his discovery that on 16 September 1940 the gallery roof was brought down by a high-explosive bomb. Starling has shot his own film which, in the gallery's words, "invites visitors on a ride where a compelling flow of images creates a sensation of floating up to the gallery's 15 metre-high ceilings or swooping down to encounter artworks." 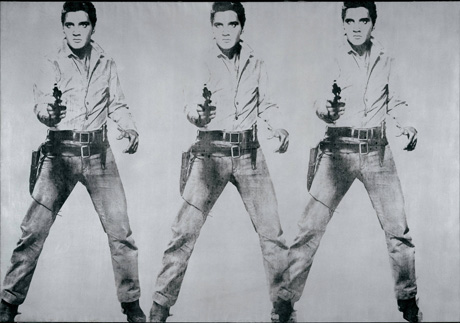 The film will play on a six metre-wide screen in Duveen Galleries, while the works chosen by Starling remain on display in the gallery all around. These include Warhol's 1963 Triple Elvis, a medieval sculpture of St George and his vanquished dragon, and the machine-gun-toting mouse of Michael Sandle's A Twentieth Century Memorial (1971).

To find out more about more about the exhibition, take a look at The Tate's own notice here. And for more on Starling himself, do consider our book, his first comprehensive monograph.