Philip Johnson might not have been the greatest 20th century architect, but he remains one of its most influential figures. His legacy does not only lie in his bricks and mortar (or perhaps more accurately concrete and glass) contributions to the American landscape, but also in the way that Johnson, in his capacity as curator, client and socialite served as “both a maker of architecture and a maker of architects”, as the author Ian Volner puts it in our new book, Philip Johnson: A Visual Biography.

During the middle of the 20th century Johnson promoted modernism via architects such as Ludwig Mies van der Rohe; yet as the decades rolled on, he turned his attentions to a wilder, new, more eclectic style, and, as Volner puts it, became “midwife to the postmodern movement.”

This playful irreverent way of building outlined more fully in our new book, Postmodern Architecture: Less is a Bore, developed in the 1970s and reached the mainstream in the 1980s before falling from favour in subsequent decades; it combines contemporary construction techniques with historical reference points, as well as wackier features.

“Rising from the architectural fringe to the big-money mainstream in an astonishingly short interval, postmodernism was to some degree a victim of its own success,” writes Volner. “Philip was instrumental in bringing about that rise,” he goes on. “In the mid-1970s, he secured a major house commission for [postmodernist pioneer] Robert Venturi and his partner, Denise Scott Brown; in 1980, he successfully maneuvered Michael Graves into the commission to build the Portland Building, the first completed postmodernist high-rise in America.” 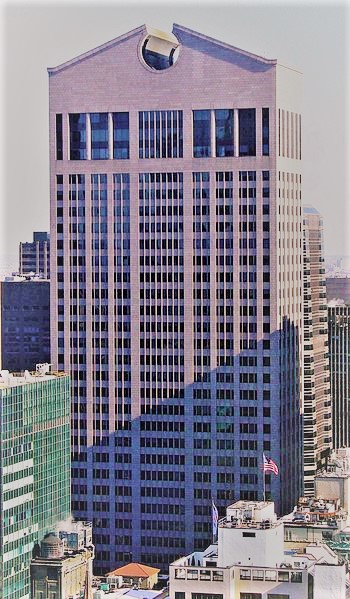 Yet Johnson’s own, New York tower block, the AT&T Building (conceived with his architectural partner of that time, John Burgee), at 550 Madison Avenue in New York, remains a highpoint of postmodernist architecture.

Conceived in the late 1970s (the image above of Johnson and his architectural model, dates from 1978), but only completed in 1984, the building was influential even before it had broken ground. Johnson appeared with the skyscraper’s maquette on the cover of Time magazine in January 1979, and though Volner characterizes the design as “Chippendale on Madison,” (“its masonry facade and grandfather-clock capital only masking a conventional corporate high-rise little different than the Seagram Building”) he also acknowledges its influence.

“It would be ‘postmodernism’s major monument,’ declared the architecture critic Paul Goldberger—and that was years before it was even built,” writes Volner. “AT&T was long in coming, almost six years between the release of the design and the completion of construction; when the building opened, it struck some as a perverse act of patricide  - ‘Mies van der Rohe,’ declared the Chicago Tribune, ‘would loathe this building’ - and others as a remarkable success (‘city reaches pinnacle as architectural leader,’ blared the New York Times).

“Certainly it was an unmistakable presence, with its broken-pediment crown and vast street-front loggia,” Volner goes on. “In the end, Philip’s design won out, with the building declared a New York landmark in 2018.”

While the building remains a monument to the postmodern movement, Johnson himself was a much more fleeting figure within that architectural milieu. “Fellow postmodernist Charles Moore described him as ‘a delightful tourist’” writes Volner. “’Philip waltzed into postmodernism in the late 1970s and waltzed right out again before the next decade was out.’”

Ironically, this dalliance with new forms and movements actually demonstrates the ever-present, mercurial side to Johnson’s work, even in his later years. “For all its failings, its bewildering caprices, Philip’s work of the period still bears consideration,” concludes Volner. “His historical fantasias are evidence of a seventy-year-old architect, in the most productive period of his career, seeking to recapture the wonder of his earliest encounters with architecture.”

For more on Johnson’s influence and to see many more images of this building and a great many others, order a copy of Philip Johnson: A Visual Biography, here; for more on postmodernism get Postmodern Architecture: Less is a Bore.