Why was Darwin convinced this long-tongued moth existed even though it wasn't discovered until after he died?

Flowers, as every disco-loving botanist knows, cannot go to nightclubs. Instead, the plant kingdom’s pollinators have to evolve other ways to connect with one another in order exchange their genes, often via pollinating insects, and as our new photobook, Evolution: A Visual Record explains, “plants have responded to this challenge through the evolution of a breathtaking array of techniques, including temptation, trickery, and transportation.” The British botanist Charles Darwin found this floral subterfuge most fascinating among Orchids. 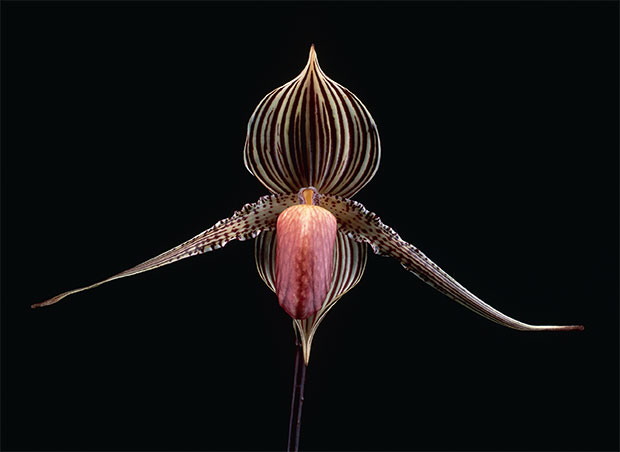 The Paphiopedilum rothschildianum orchid as photographed by Robert Clark for Evolution

“Orchids boast the most diverse group of pollinators of any plant family, including a host of birds, bees, wasps, butterflies, and moths, and even a species of cricket. The tech­niques some orchids use to attract pollinators are glories of evolution,” explains the text in Evolution, which accompanies Robert Clark’s beautiful photographs. “For example, the genus Ophrys, the “bee” or “fly” orchids, mimics female bees so markedly (while also emitting intensely attractive scents) that male bees pollinate them in the midst of frustrated mating attempts. And one species, the South American sack-shaped catasetum (Catasetum saccatum), which intrigued Darwin himself, actually hurls its sticky pollen sacs at insects when they touch a part of the flower.”

Yet there was one Orchid that truly foxed Darwin, as Evolution explains. “Darwin’s most famous connection to these diverse and widespread plants involved Angraecum sesquipedale (now commonly known as Darwin’s orchid), a species from Madagascar. Studying it, Darwin understood that the species could be pollinated only by a moth with a proboscis far longer than any yet seen on Earth. 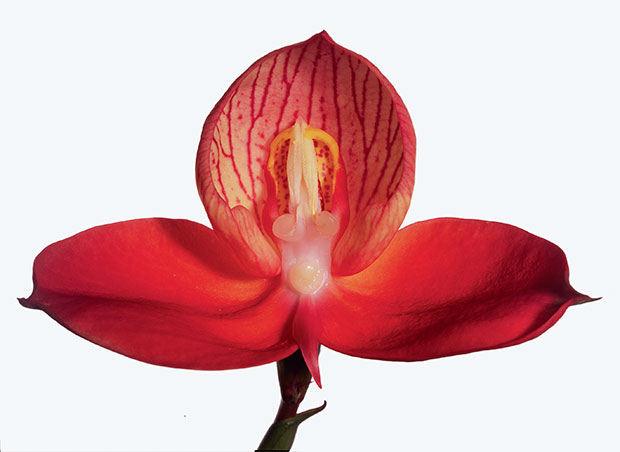 The Prosthechea cochleata as photographed by Robert Clark for Evolution

A variety of “experts” ridiculed Darwin’s prediction, published in 1862, that such a moth must exist somewhere on Madagascar. (Ridicule was an experience he must have been used to by then.) It wasn’t until 1903, more than two decades after Darwin’s death, that collectors found the exact moth that he’d said was out there: Xanthopan morganii, originally given the subspecies name praedicta in recognition of the great man who predicted its existence.”

That incredible moth now graces the cover of our new book, where you find plenty more inspiring stories and pictures backing up Darwin’s theories. Order your copy here.

Robert Clark is an award-winning photographer with a twenty-plus-year career shooting for National Geographic, among others. He has produced several books and has exhibited widely. Clark is based in Brooklyn, New York. David Quammen is an acclaimed science, nature, and travel writer. Joseph Wallace is the author of more than a dozen books on natural history, among other topics.