The firewood that makes monk remarkable

Every part of this incredibly simple, yet refined restaurant is perfectly conceived, including its wood pile

There are many elements to monk, Yoshihiro Imai's 14-seat, seasonally inspired restaurant, that set it apart. It’s location, on the cherry blossom-lined Philosopher's Path in Kyoto, is pretty special. This promenade is a canal-side route once frequented by local philosopher and university professor Nishida Kitaro and it's a fitting spot for Imai’s exacting, tranquil, contemplative restaurant, where he specialises in pizza, creating seasonal menus and favouring fresh, and sometimes wild local ingredients.

However, another focal point for monk is its wood-fired oven, which provides pretty much all the heat required for Imai's cookery, as well as spiritual sustenance for the chef himself. “Fire lifts the spirits, and before we know it we are gazing at it and can keep watching it forever,” the chef writes in his new book, monk: Light and Shadow on the Philosopher’s Path. In his wood-fired oven, the chef goes on, “the ingredients come together as food and produce their own light in the form of a dish, and connect with the life source of the guests within their bodies.” 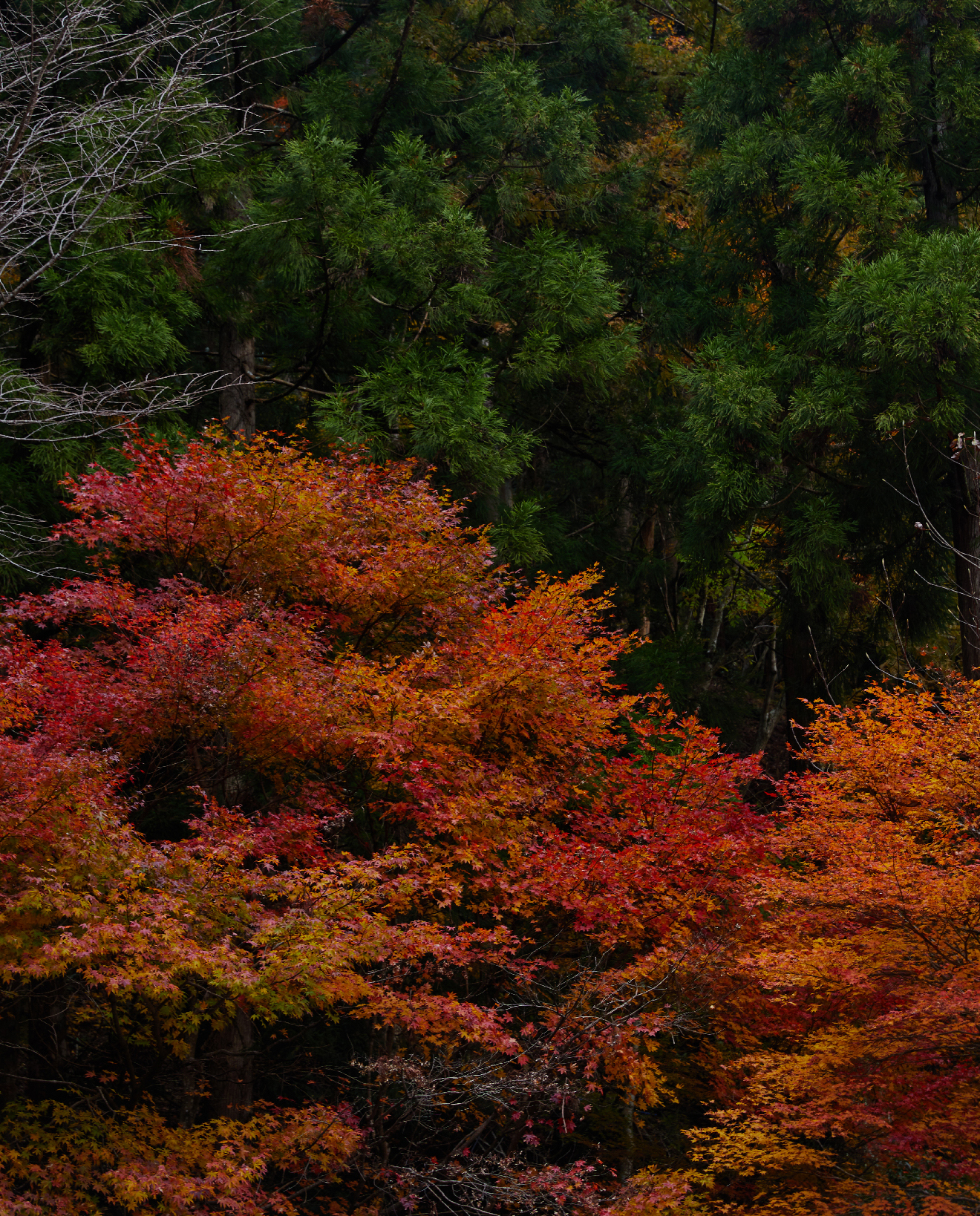 Imai lights his oven three hours before monk’s service starts. “A small fire begins burning quietly in the dark of the oven, and marks a special moment at the start of the daily ritual,” he explains. “From there, I continue to feed firewood to the oven to bring up the heat. This preheating period is the best time to roast root vegetables. The temperature of the oven floor is about 465°F (240°C) at this time. The inside of the oven starts filling up with sweet potatoes and taro roots sealed in lidded iron pots, or beets (beetroots) wrapped in a salt crust. Sometimes I’ll bake apples, basting them periodically with honey and butter. The temperature of the oven rises as it continues to preheat; the vegetables are taken out of the oven one by one, and begin populating the kitchen counter. From there, some go into the blender to be made into soup, and some go into a marinade. When service starts, the oven is at maximum temperature. During service, the temperature will rise to 840° to 930°F (450° to 500°C), which is an impossible temperature for a regular oven.”

That high temperature is difficult to control. “Because the wood-fired oven doesn’t have buttons or a temperature dial and runs solely on firewood, factors like the humidity of the wood directly affects how the oven heats up,” the chef explains. “Running the oven is a bit like a Formula One driver intuitively knowing how far to push the accelerator to get the right speed, and depends on knowing exactly what needs adjusting and when.” 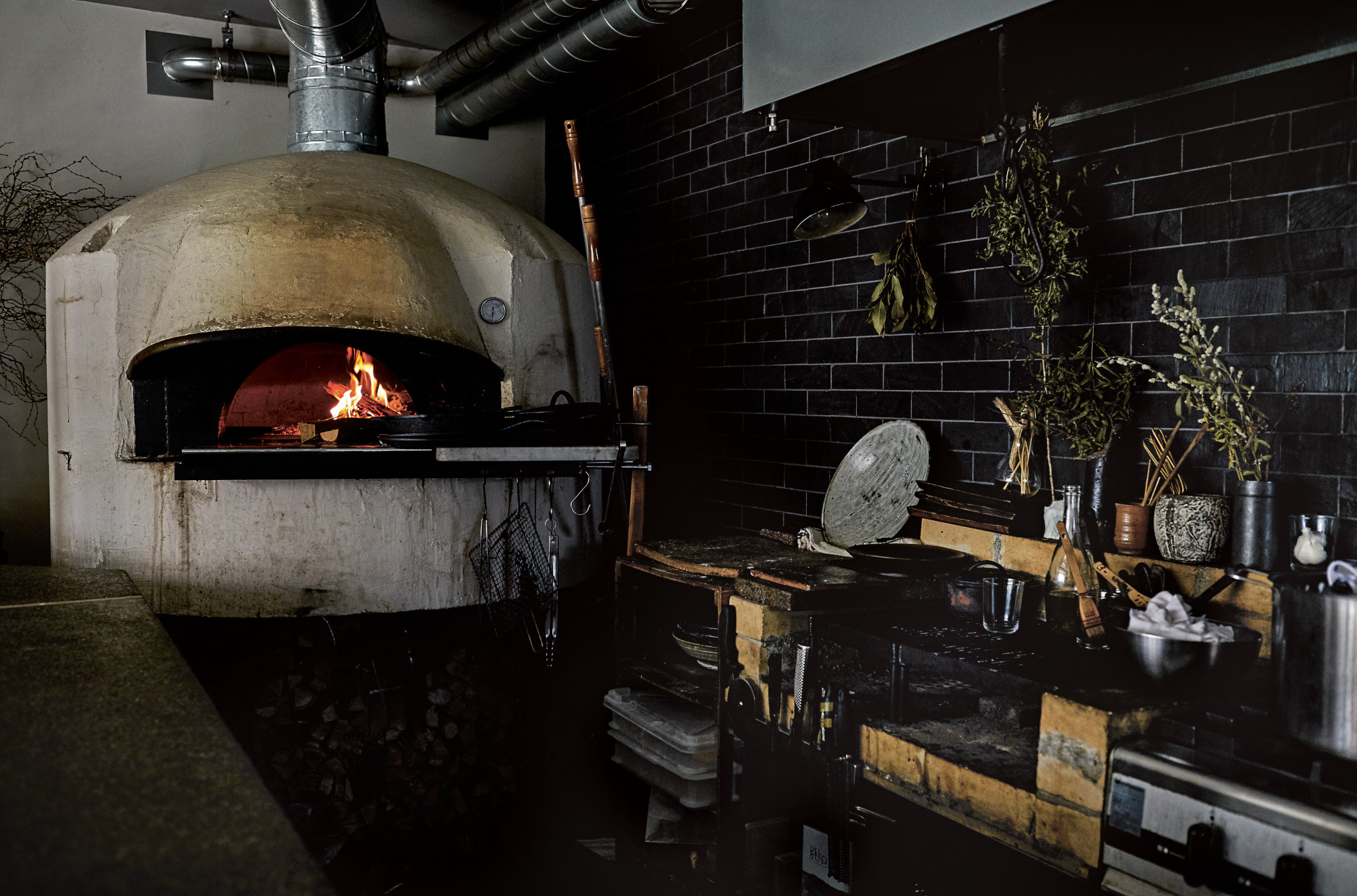 The oven at monk

And sourcing that wood is a key part of the chef’s role. Imai buys his wood (mainly Japanese oak, though sometimes cherry) from Mr. Furuhara, a forester in Hanase, a small village deep in the mountains of Kyoto. “It’s about an hour-and-a-half drive north of monk, where only a few city buses run each day,” he says. “Hanase is a beautiful village that feels like an old Japanese folk tale.”

“Mr. Furuhara’s hands are thick, like a baseball glove,” the chef goes on. “He injured his lower back a little while ago, but he is still going strong. Every three weeks, he drives down from the Hanase mountains to deliver a truck full of firewood. Sometimes he brings special gifts from his mountain, like wild mushrooms and mountain vegetables, or the shiitake and vegetables he grows.”

Imai isn’t Furuhara’s only client. The forest also cares for woodland belonging to the Kiyomizu temple, one of the most famous places of worship in Kyoto. “The temple is known for its 43-foot (30 m) high balcony called the Kiyomizu stage, which overlooks the forest,” Imai explains. “It’s supported by large pillars of four-hundred-year-old Japanese zelkova trees. Mr. Furuhara is working with the temple to plant the next generation of zelkova that will be used to replace the pillars some four hundred years from now.” 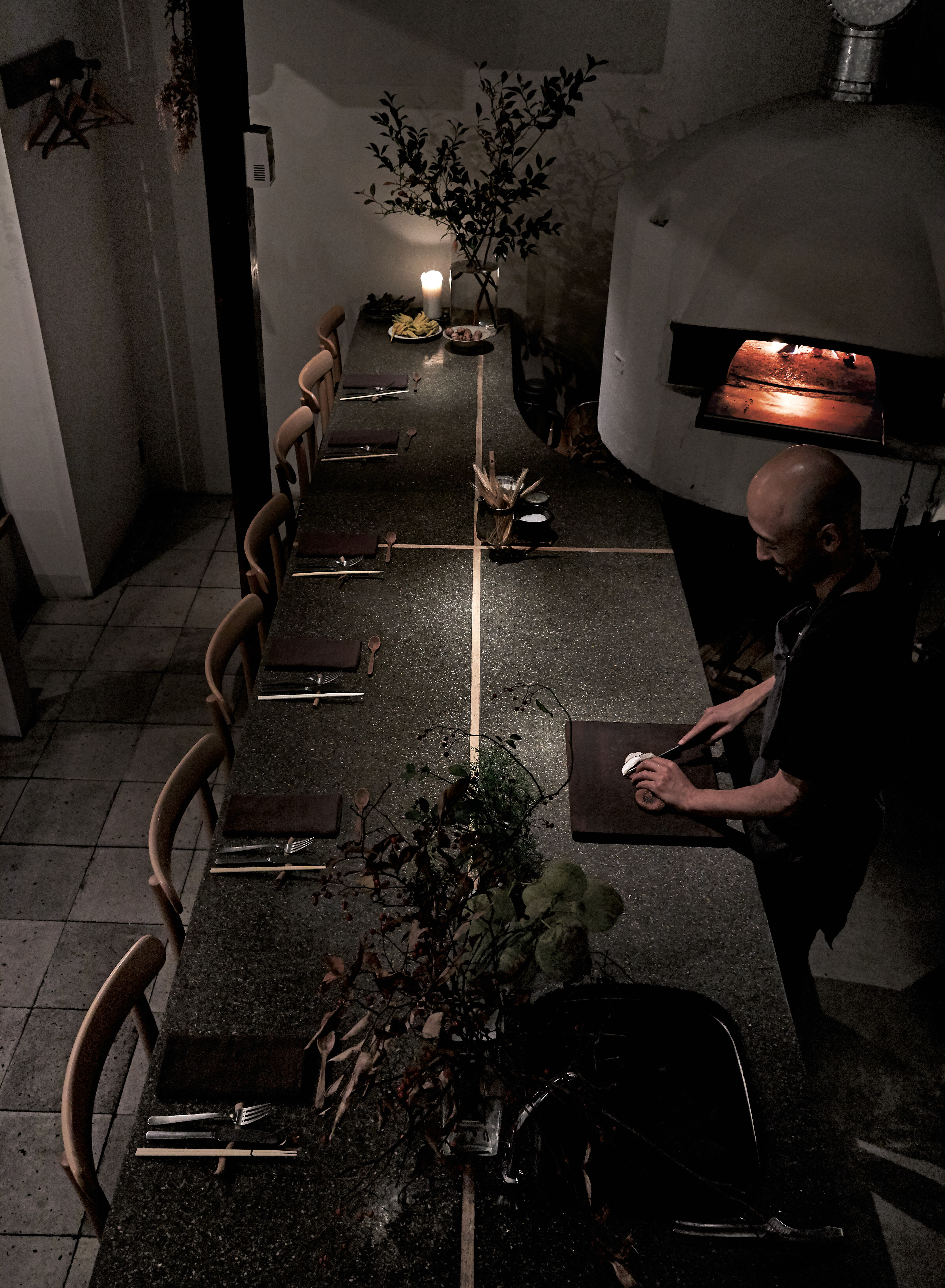 Yoshihiro Imai beside his oven at monk

Of course, trees don’t grow overnight, but the forester takes a long view. “By the twenty-fifth century, when the trees will reach maturity, Mr. Furuhara, his son (who is taking after him), and I will be long gone,” Imai explains. “ Just as people some four hundred years ago could not have imagined the twenty-first century, the twenty-fifth century is beyond my imagination. But I believe that Kyoto will still be Kyoto, and that the Kiyomizu stage will be rebuilt again in four hundred years as it has for the past twelve hundred, using the zelkova planted by Mr. Furuhara.” Perhaps there will also be dedicated chefs, such as Imai, cooking over burning wood, too. To find out more about Imai's cooking and his incredible restaurant, order a copy of monk here. 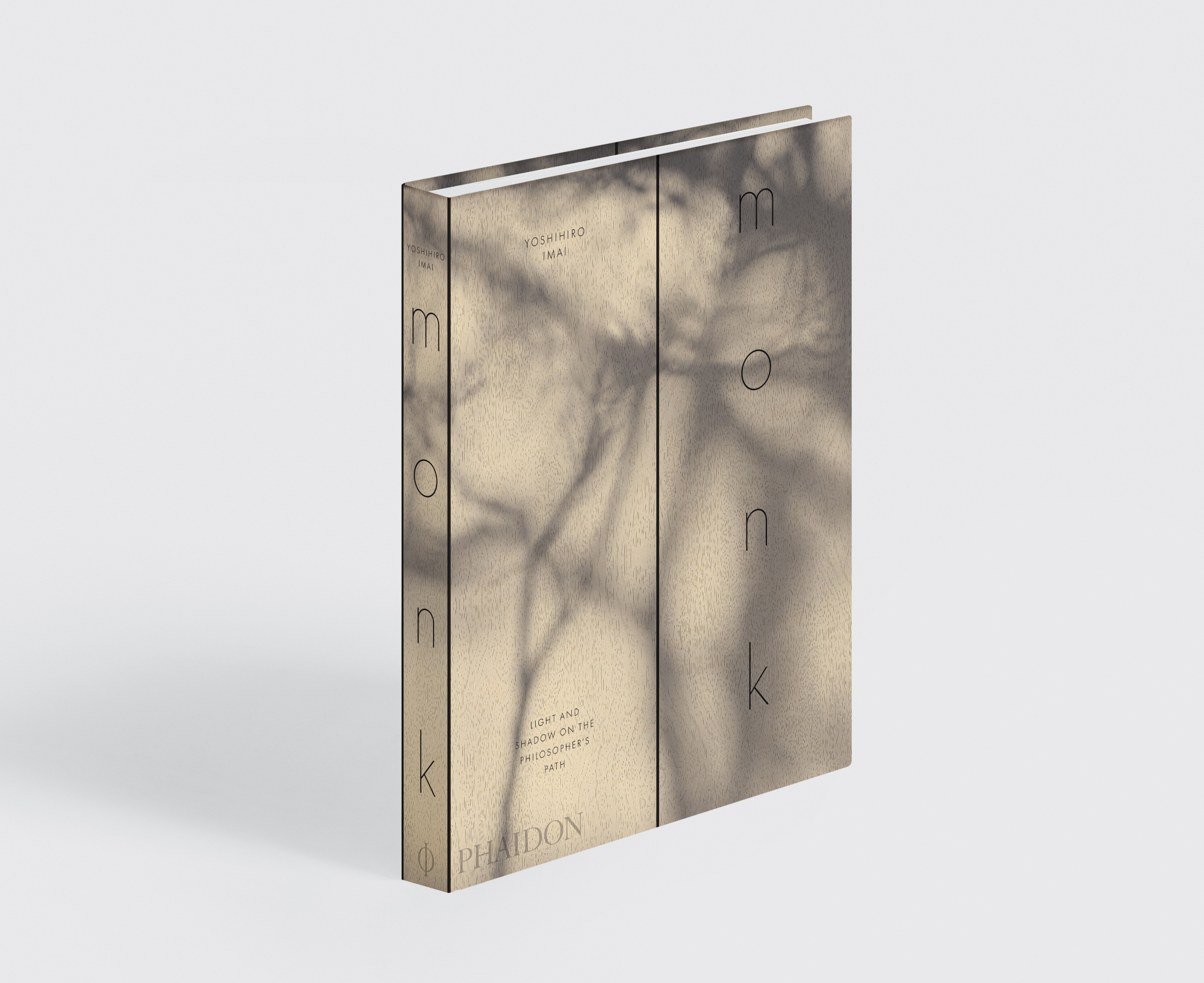 monk : Light and Shadow on the Philosopher's Path Yoshihiro Imai

An evocative and personal chef monograph – and an ode to wood-fired cooking – from Yoshihiro Imai, Japan's exciting emerging chef, and his cult restaurant, monk

monk is the story of Yoshihiro Imai's 14-seat, seasonally inspired restaurant, set on the cherry blossom-lined Philosopher's Path in Kyoto. Through personal essays, reflections, 75  contemporary Japanese recipes, and photography, Yoshihiro describes stories of the farmers, makers, and exceptional ingredients – from foraged vegetables to herbs and flowers – that inspire his omakase-style menu, explains why cooking with fire is central to the restaurant, and traces the evolution of the unpretentious, innovative, and flavorful pizza for which he is now renowned globally.

International media attention in the Wall Street Journal Magazine and Monocle Travel Guide Series have solidified Yoshihiro's influence on the Kyoto dining scene and both his visibility as a global chef and his restaurant monk have global appeal, with diners flying in from around the world to eat there.

Yoshihiro Imai is the chef of monk, a fourteen-seat, omakase-style menu restaurant set on the Philosopher's Path in Kyoto, which he opened in 2015. He developed his skills while working at enboca, a pizzeria with three locations in Japan, leaving as head chef in 2013. He is deeply inspired by Japanese culture as well as time spent at several well-known restaurants around the world, which inform his celebrated, exquisite, and highly seasonal cooking.

'In Kyoto a slick chef is perfecting seasonal Japanese dining served up in the most unlikely way.' - Condé Nast Traveller UK

'Expect pizzas topped with mackerel and kamonasu aubergine (a round Japanese variety), plus the likes of kintoki carrot with sake kasu (a by-product of sake-making).' - National Geographic Traveller FOOD

'Here, [Yoshihiro Imai] gets very philosophical about cooking with wood fire, foraging, cooking seasonally, working with farmers, and more. All in the name of pizza.' - Stained Page News

'The heart of this book is the story of the author ...The writing and photography offer a journey to a tree-lined path beside a waterway on the eastern side of Kyoto, where we sit with Imai and have a talk about food, philosophy, and life.' - Harbor News

'monk is a refreshing reminder of the importance of finding and creating beauty in everything we do: our work, food and environment.' - The Caterer

'You don't have to make the intricate pizzas featured in this cookbook to appreciate the sentiment. It's a great coffee table book too, with amazing food photography and great stories that will inspire you too cook better, and more often.' - Men's Health