Have yourself a very Mezze Christmas

Tired of the mince pie, mulled wine and turkey routine? Then try these dishes from The Mezze Cookbook

You might assume that Christmas doesn’t feature that prominently in Salma Hage’s cooking. However, the author of The Lebanese Kitchen, The Middle Eastern Vegetarian Cookbook and The Mezze Cookbook, actually comes from a Christian background in this small and highly mixed Levantine country. In fact her father was a Maronite minister, so even some of her small-plate recipes take in a little of the festive season. 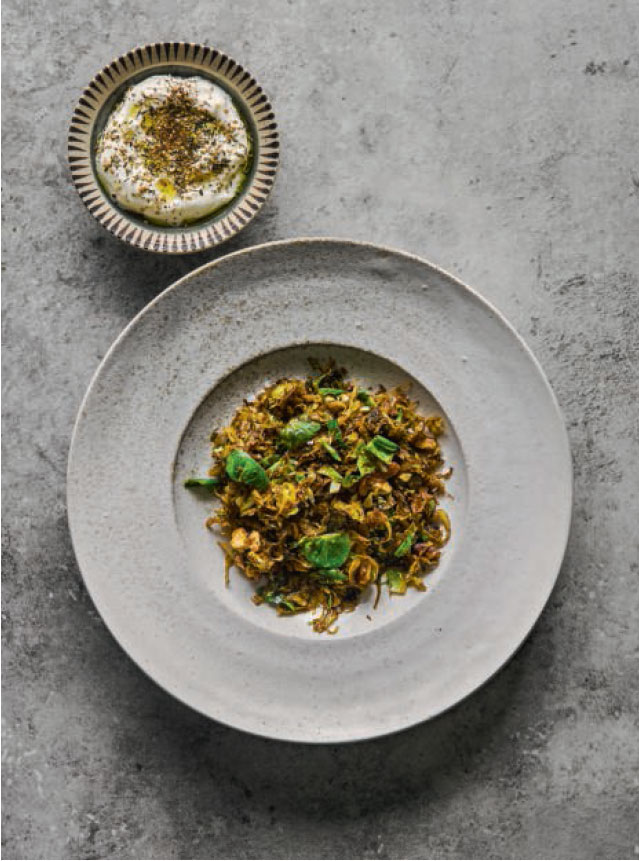 Consider, for example, that lowly Christmas staple, the Brussels sprout, which features in The Mezze Cookbook. “It’s such a divisive vegetable,” she admits, “but treated with care they are worth celebrating well before and beyond Christmas. I like them cooked in a really hot pan, and browned in places, which seems to work well with so many members of the brassica family.” Her mezze recipe follows this method, and also adds walnuts too.

Then there’s ma’mool cookies (top image), a popular nut or date-filled snack during Eid in Muslim communities, and in the run up to Christmas in Christian homes. “I have been making these pretty cookies for more years than I can remember,” she writes in the Mezze Cookbook.

“At Christmas, I make batches to give as gifts, packaged in boxes and tied with bright ribbons. There’s something about the texture of the semolina in the dough that makes them very moreish. You can often find the molds in Middle Eastern stores. They’re not expensive and are lovely objects to keep.” 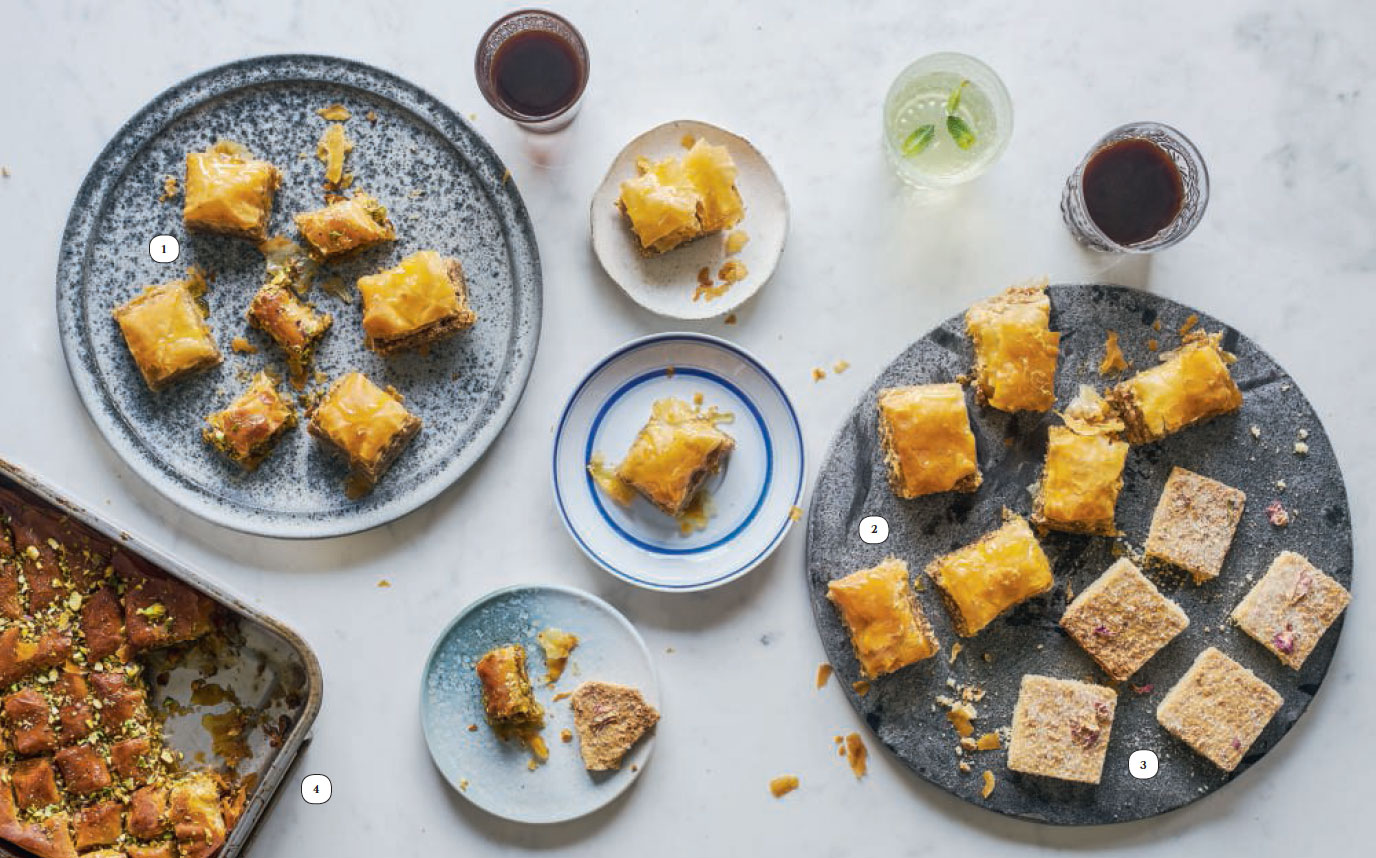 1. Walnut and Rose Baklava 2. Pecan and Orange Baklava 3. Rose and Cardamom Shortbread 4. Pistachio Baklava. As featured in The Mezze Cookbook

There are also other Mediterranean delicacies that work well during the festive period, such as Hage’s pecan and orange baklava recipe, which, the author says she likes to make around Christmas time; “the orange zest and spices go so beautifully with the pecans.”

To find out how to cook these and many other recipes order a copy of The Mezze Cookbook here.

A vibrant collection of exciting, exotic, and sharing-plate recipes from across the Middle East

More than 135 home-cooking recipes in this book explore the regional diversity of Middle Eastern sharing dishes, from Lebanon and Iran to Turkey and Syria. Divided by style of dish, the book features both meat-based and vegetarian dishes, along with suggested mezze-style menus and a glossary of ingredients. From Roasted Cauliflower with Tahini and Smoked Paprika to Pistachio and Pomegranate Cakes, The Mezze Cookbook is packed with both traditional and modern takes on this age-old way to share food.

This cookbook is filled with vegetarian, meat-based, and fish recipes for everyone to enjoy.

From the author of the acclaimed The Lebanese Kitchen and the James Beard Award-winning The Middle Eastern Vegetarian Cookbook, also published by Phaidon.

Lebanese Salma Hage, from Mazarat Tiffah (Apple Hamlet) in the mountains of the Kadisha Valley in north Lebanon, has more than 50 years of experience of family cooking. She learned to cook from her mother, mother-in-law, and sisters-in-law, and spent many years working as a professional cook. This is her third book, after The Lebanese Kitchen and the James Beard Award-winning The Middle Eastern Vegetarian Cookbook.

"With so many enticing dishes it could be near impossible to know where to stop. As ever with a Phaidon publication, the photography is stunning, and a nice touch is the numerous double page spreads featuring multiple dishes laid out as a mezze selection that's been eagerly dug into. The Mezze Cookbook is a book packed with dishes that are healthy, flavourful and well balanced, and a wonderful way to explore the rich variety and cuisine of the Middle East at home."—LondonLamppost.com

"Beautiful... A vibrant collection of exciting and exotic sharing-plate recipes."—Stir It Up Magazine

"Take your Mezze to the next level... Salma Hage serves up a tasty selection of small dishes to tickle your taste buds with delight."—Vegan Food & Living

"A very good and rather clever thing to have in your culinary armoury."—Western Morning News

"This book is packed with both traditional and modern takes on this age-old way to share food."—Tasting Table

"The Mezze Cookbook is a gift-quality volume which reflects how most of us eat... or would like to... There are plenty of beautiful photographs to inspire and tempt and to give a bit of confidence to the novice cook. There is nothing too taxing and one won't be expected to buy any specialist equipment... is an ideal gift for any keen cook who could be looking for easily achieved dishes which are a little different from the usual fare... This will become a well-used volume."—MostlyFood.co.uk

"A glossy guide to creating an array of sumptuous sharing dishes."—The Guardian

"The sub-title, Sharing Plates from the Middle East, could scarcely be more cutting-edge. Some of the most fashionable tables in London are laden with these tantalising, spicy nibbles... Despite living in London since the Sixties, (Salma Hage) has 'always craved the social food from my homeland'. A delicious litany follows: 'labneh, babaganoush, hummus... Kibbeh, freekeh, ful medames'... Lucid and detailed, Hage's recipes provide the template for the tastes of the Lebanese table. As for the sociability, it's up to us."—BreadandOysters.com

"[A] cornucopia of recipes from the Middle East, and many of the 135 dishes are naturally vegetarian."—HuffPost

"There are so many good things in Salma Hage's The Mezze Cookbook [...] including excellent ways with vegetables. She's a master of the genre: generous in spirit and fundamentally hospitable."—Evening Standard

"Readers embark on a journey of mezze recipes that are approachable and make you want to gather your friends and family for a mezze party."—CulEpi

More on Have yourself a very Mezze Christmas 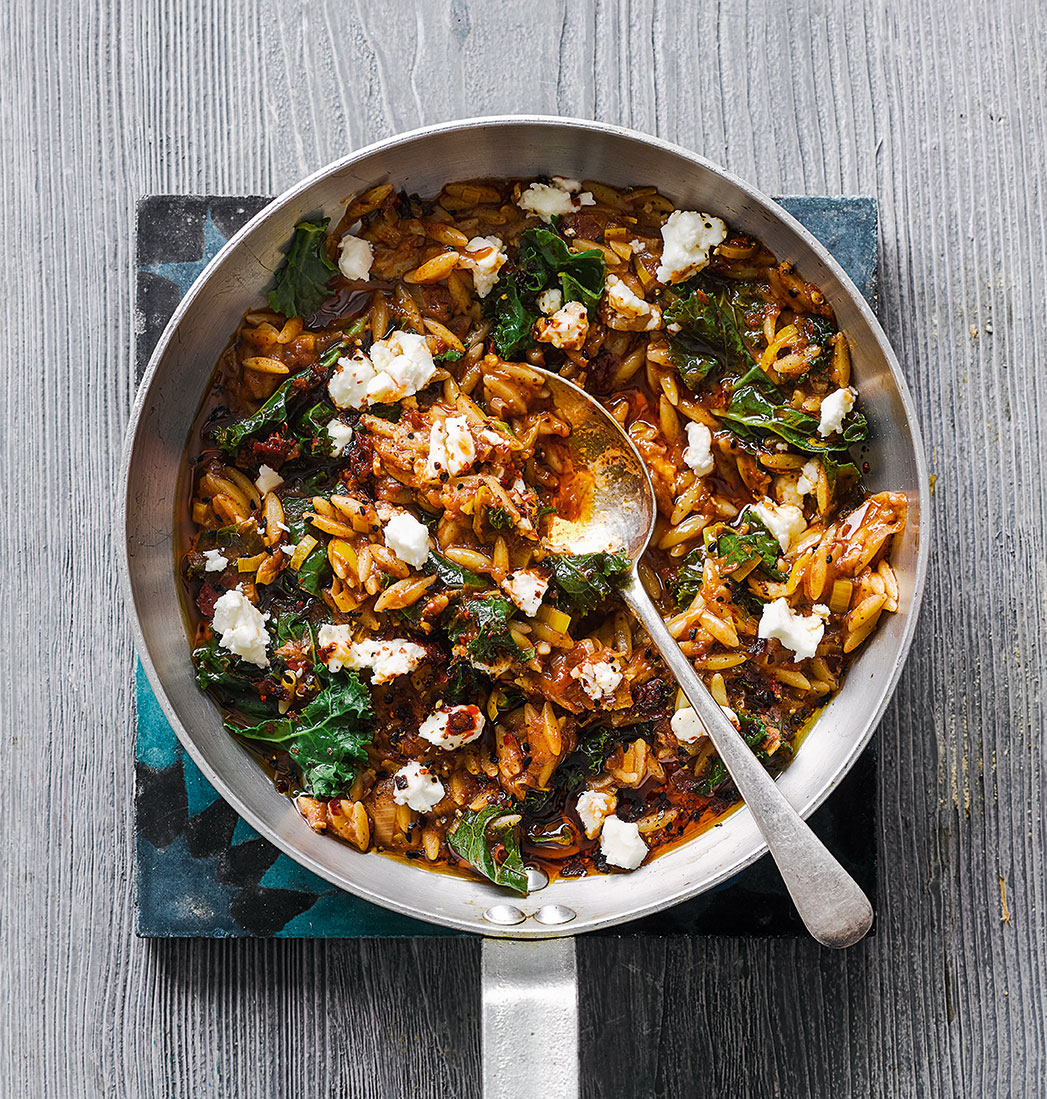 On National Pasta Day, why not try this Middle Eastern take?