Learn how anger, arrogance, suspicion, and curiosity led the painter to pick up an iPad and create a great new work

Could it be that the title of Eric Fischl’s new Artspace edition, Mix and Match, 2020 was inspired by the method of its creation?

Fischl used the ArtRage app to create the work, the same app he used to create new works  in 2016, during the US presidential election campaign.

“With all the different ‘effect’ tools on the palette, I tend to mix and match them in ways that would never occur to me while painting,” Fischl says of this new way of working.

Fischl incorporated one of those early iPad images into a painting at his 2018 London show at Skarstedt gallery - one of seven works in the show priced between $750,000 and $850,000.

Yet while the method used to create Mix and Match, 2020 is relatively new to the artist, Fischl's intent remains the same. "The point of painting is to try to find the hidden truth,” says the 72-year-old New York painter.

“It’s about needs and desires. Themes of my life, themes of my art, are about connection, about the longing for connection. Basically, these are stories about men and women, boys and girls, trying to figure that whole thing out.”

The exclusive edition Mix and Match, 2020 celebrates the beauty of a chance beach encounter between two women in mismatched red and green bikinis.

It's a prime example of what co-chief art critic of The New York Times Roberta Smith was talking about when she described “Fischl at his best" as "a teller of passing thoughts, indefinable tensions and denouements too negligible to notice."

To celebrate the honor, we spoke to Eric Fischl about art school, 80s New York and the new work. 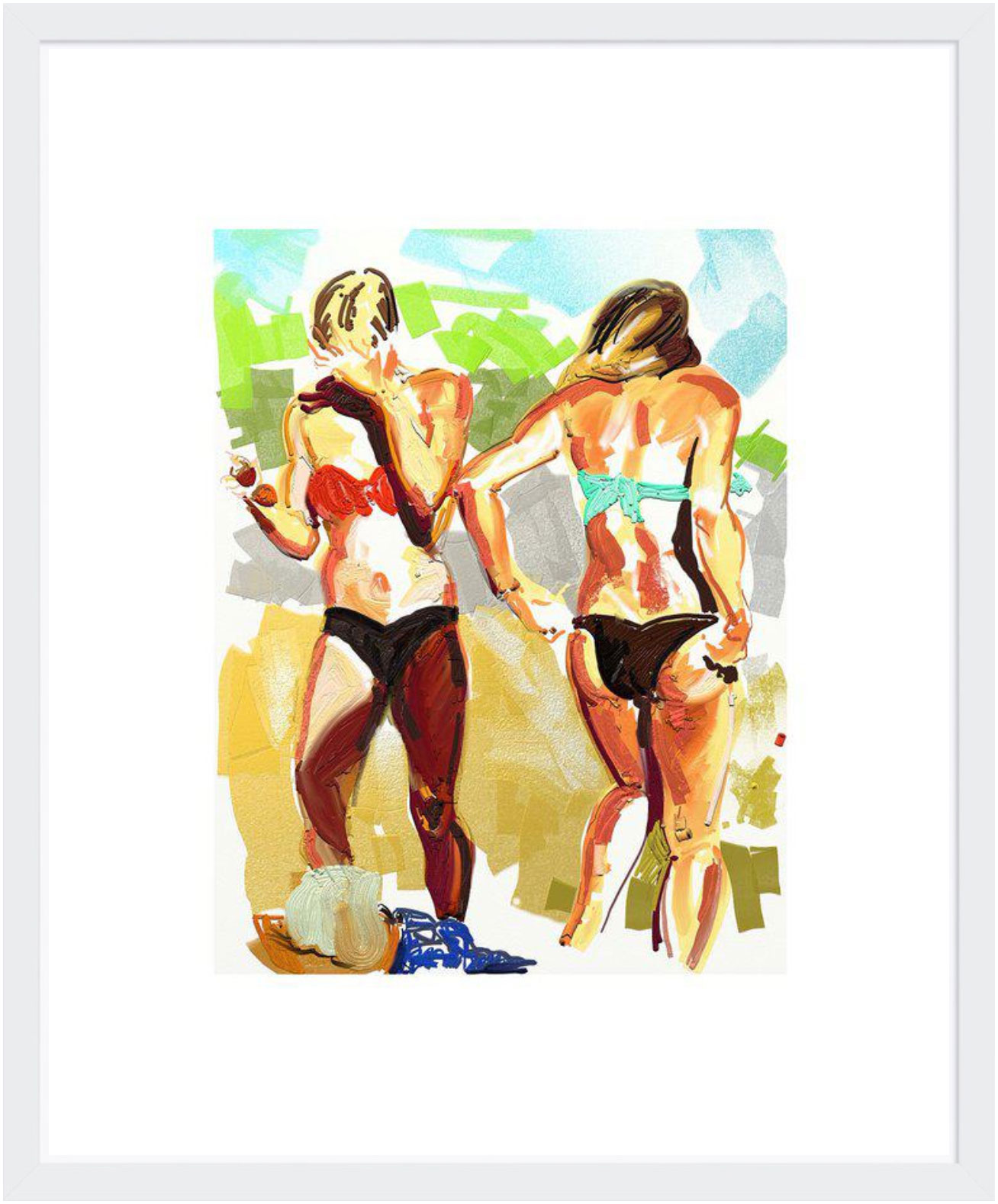 What attracted you to using an iPad as a creation tool?

When photography came along, the artists first using it were trying to recreate academic paintings. It took a while for artists to see it was offering new ways of seeing and constructing images which moved painting forward. I’m more like the first kind of artist and the app I use (ArtRage) is all about facsimile ‘painting’ effects so I make images that look more like my paintings. Mostly it is fun and satisfies my fear that if, for an inexplicable reason, I find myself on a planet that has air, food, water, WiFi and no people I will at least be able to amuse myself.

We’ve heard you speak about ‘the moment’ in a painting. If the process of creation is perhaps different, does that ‘moment’ differ for you? And does the flatness of the medium change the relationship?

It is neither painting nor photography but another thing in between. It is more directly connected to printmaking and more specifically to lithography and silkscreen which can use photography and/or painting ‘effects’ to create an image.

What happy accidents, restrictions, and possibilities does the iPad medium afford you in regard to that?

With all the different ‘effect’ tools on the palette, I tend to mix and match them in ways that would never occur to me while painting. The glass surface is slick. Unlike painting on canvas where the ground creates resistance and friction, the iPad’s surface has none of that. Harder to feel and control the speed and weight of the gesture.

Why the use of red and green?

The positioning of heads and bodies suggests two beings together alone – which seems prescient...

Definitely was not anticipating social distancing as it relates to our nightmare pandemic! The questions you asked, the observations you’ve made are along the same lines as mine. I am compelled to create work that opens up the questions. When I finish a work I am in the same place as the viewer. I am asking myself more or less the same questions. These questions lead us deeper into our memories and our feelings. This is what I ask of myself and this is what I ask of art.

It is one of your more beguiling works

"I’m of two minds about art in times of trouble. As artists, our gift and our skill set is that we can organize feelings and emotions into shapes, colors, forms and images in such ways that they capture and embody what we are experiencing. This is why art is important at any time but especially in times as complex and frightful as we are in now.

So there is a part of me that wants to creatively rush into battle against the dark forces that fuel our fear and anger. But there is another part of me that wants to soothe this agitation with images of tenderness, joy, humor and sun-filled beauty that can keep us connected to our hopes and our optimism rather than our fear and panic. I would say Mix and Match falls into the latter category."

Your paintings seem to have always depicted the reality of American life, how has that reality changed for you over the years?

I would first like to make a small, but significant, correction. I have aspired to capture a reality and it is a reality that is an aspect of a certain kind of American life. It is more about class; the middle class I grew up in. That class no longer exists in the same way that it had. When I grew up it was a transitional class, full of potential to move upward and out of it. It was a class that lived off images of false promise and misrepresentations of equality. Its delusions, disappointments and materialism were the most fertile soil for me and my generation that grew up in them.

Was there a key moment when the work evolved?

Has it evolved? My work has gone from trying to separate the more urgent existential and spiritual questions of my life from the inane ambitions and pretenses of those whose values I imagined were holding me back. Now I have come to see that the existential and spiritual questions are as much an illusion so my anger and fears have shifted their footing when it comes to blame. Now I see we are all trapped by our desires and our needs.

What’s the one thing you learned at art school that you still draw upon today?

How to solve the problems I have created for myself in my paintings and my sculptures.

And what were the smart ideas you came up with when you had long hours to think during your time as a museum guard?

I learned the skill of long-looking. I learned that art opens up slower than it at first appears. I learned that I could interpret another artist’s work and in that interpretation I could possess it. I learned how to get comfortable around art; how to become less intimidated or precious.

Wonderful time. Total blur. Felt like cultural revolution was in the air and I was a part of it. Wonderfully ambitious. Wonderfully competitive. Glamorously playful. Physically dangerous. Naive.

And of the new generation, who are the up-and-coming painters you're particularly interested in?

I have set up a program/relationship between the NYAA and my boarding school, West Nottingham Academy, whereby 3 recent NYAA graduates are selected each year to do 10 week visiting artist/teaching residencies at West Nottingham Academy. They receive a stipend, room and board, and a studio. I also do another internship/ residency with NYAA graduates and the Fogo Island Arts program in Newfoundland, Canada.

You can find out more about this limited edition of just 50 full color digital archival prints on Epson Ultra Presentation Matte paper - only available on Artspace, here.

Peter Saul is known for his vivid, cartoon-like paintings that satirize American culture. Influenced by the Chilean surrealist painter Roberto Matta and by MAD magazine, Saul developed his unique neo-surrealist style in contrast to the abstract expressionist aesthetic that prevailed at the time. Through wide-ranging imagery, Saul's darkly humorous works trenchantly comment on contemporary politics and culture.

Robert Cozzolino is Patrick and Aimee Butler Curator of Paintings at the Minneapolis Institute of Art.

Matthew Israel is an independent curator, writer, and art historian based in New York.

Dan Nadel is a New York-based writer and curator.

Nicole Rudick is a writer and editor based in New Jersey.

John Welchman is a professor of modern and Contemporary art history at the University of California, San Diego. 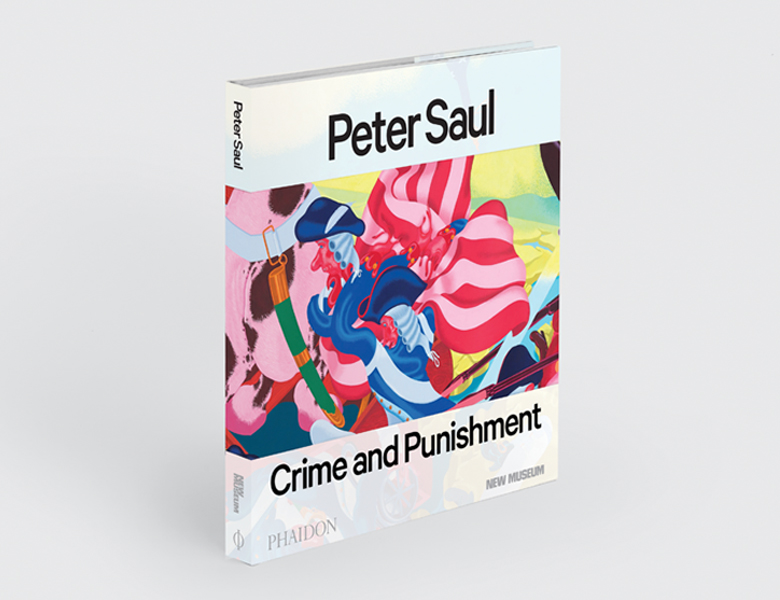 All you need to know about Peter Saul: Crime and Punishment