From one angle, the volcanic mountain of El Teide on the Island of Tenerife - one of the Spanish Canary Islands - juts up into the horizon from the barren, ashen landscape in Meike Nixdorf's photographs, from another the same mountain sits behind lush greenery.

“Like pieces in a puzzle, every image from In the Orbit of El Teide holds different visual aspects of the same subject,” says the Berlin-based photographer. “But unlike a piece in a puzzle, each image appears to stand on its own. And it is only through looking at these images one-by-one that one realizes how much more information, visual aspects, perspectives or stories-to-be-told there are to just one single mountain—or any subject matter, basically.” 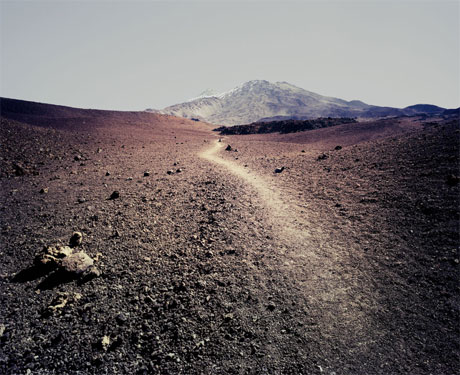 Meike Nixdorf’s work explores perspective, documenting a subject from different angles as it draws out stark contrasts and thoughtful comparisons. Her recent project In The Orbit of El Teide - where she circled the volcanic mountain of El Teide, photographing it from different perspectives - got her spotted by New York magazine’s photo editor Leonor Mamanna after it was featured on the blog This Isn’t Happiness.

"The project focuses on the question of what can be seen, or how much information can be gathered from only one single point of view versus the information, visual or abstract one could gather by orbiting an object, question of focus point,” she says. “In this way, two different points of view of the same subject matter could differ in their look or feel tremendously and might not even be recognised as the same subject matter anymore.” 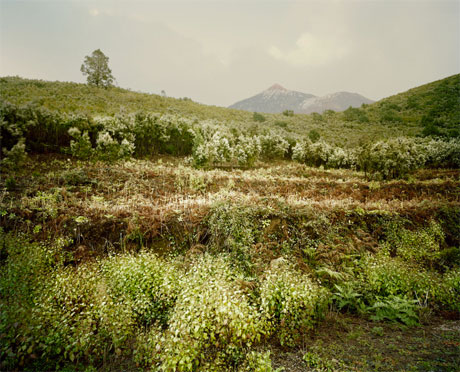 Nixdorf’s other projects have seen her explore similar themes of contrast created through altered perspectives. Her 2010 series Once I Left The World Behind saw her documenting an island in the Baltic, where land met ocean; and her Point of View series (2006-2009) saw the photographer exploring different points of view on the same subject.

The photographer often uses a Mamiya 7 rangefinder camera with a wide-angle lens. “I am very much about what is going on in the foreground," she says, "and the 6x7 format makes it possible to include a lot of foreground while still shooting in a landscape format. Also with a rangefinder camera it is very easy to move around and look at things from multiple angels - a key issue in my work.” Nixdorf usually shoots negative film and the highly stylised effect is created in retouching, her partner, Grit, adds in colour grading and radiation in post-production. 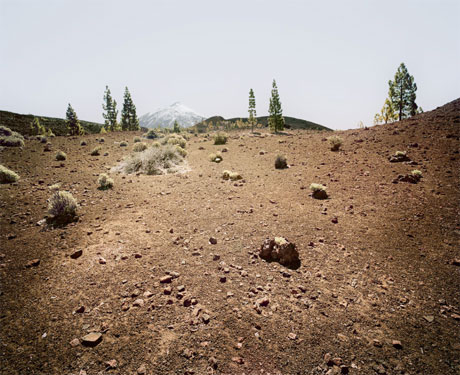 Meike Nixdorf’s work will be featured as a night projection during Photoville in Brooklyn New York next month.

If you enjoyed Meike Nixdorf's views of the Tenerife landscape, you might like Phaidon's new book The Sites of Ancient Greece, which offers a birds-eye perspective on some of the contry's most famous and evocative landscapes, cities and buildings.

The Sites of Ancient Greece: Text by Paul Cartledge, with aerial photographs by Georg Gerster

From the Acropolis to Mount Olympus, The Sites of Ancient Greece offers a birds-eye view of some of the most famous and evocative landscapes, cities and buildings in history, many of them UNESCO World Heritage sites.
Specifications:

Paul Cartledge (b.1947) is Professor of Greek History, the AG Leventis Professor of Greek Culture and a Fellow of Clare College, Cambridge. He also holds a visiting Global Distinguished Professorship at New York University. Cartledge is a world expert on Athens and Sparta in the Classical Age and was chief historical consultant for the BBC TV series ‘The Greeks’ and the Channel 4 series ‘The Spartans’. His most recent books include Ancient Greek Political Thought in Practice (2009) and Ancient Greece: A History in Eleven Cities (2009). He is also honorary citizen of (modern) Sparta.

Georg Gerster (1928-2019) was a pioneer in aerial photography. For over forty years he took  breath-taking pictures of mountains, coasts and spectacular archeological sites in 111 countries on all continents.

"A fresh, Zeus's-eye perspective on landscapes, and sites, that ring with ancient and mythological significance."—Metro

"With tales of strife and discord the daily bread of Greece, it is easy to forget why the country has beguiled everyone from ancient poets to modern holiday-makers. This book, however, with its 150 bird's-eye photographs, is a salutary reminder."—The Independent

"Aerial views like the 100 images in Georg Gerster's The Sites of Ancient Greece... Achieve a perspective even those immortals can envy."—The Wall Street Journal

"Gaze at the bright blues and whites of timeless Greece with aerial photography at its best."—Boston.com

"These photographs are at once striking images unto themselves and documents of a time and place. This time is now but the place is the past - we are at once straddling the space where time simply collapses. And in being in this space, Gerster allows us to consider the photograph itself as a means to telling us a story which has no beginning and no end."—La Lettre de la Photographie