In A Work in Progress: A Journal the chef describes his dismal winter, and his personal and professional salvation

What are your ambitions for 2019? You might want to be careful what you wish for. When René Redzepi's Noma topped the World’s 50 Best Restaurants list, he found that, rather than life getting easier, it actually got harder. Add a dark, Nordic winter and you have all the ingredients for a genuine career crisis. A Work in Progress: A Journal  (originally published as part of a special box-set back in 2013) is Redzepi’s own pivotal record of that year, and serves as a good guide to personal and professional redemption, even if you're unlikely to be heading up a double Michelin-starred kitchen anytime soon. 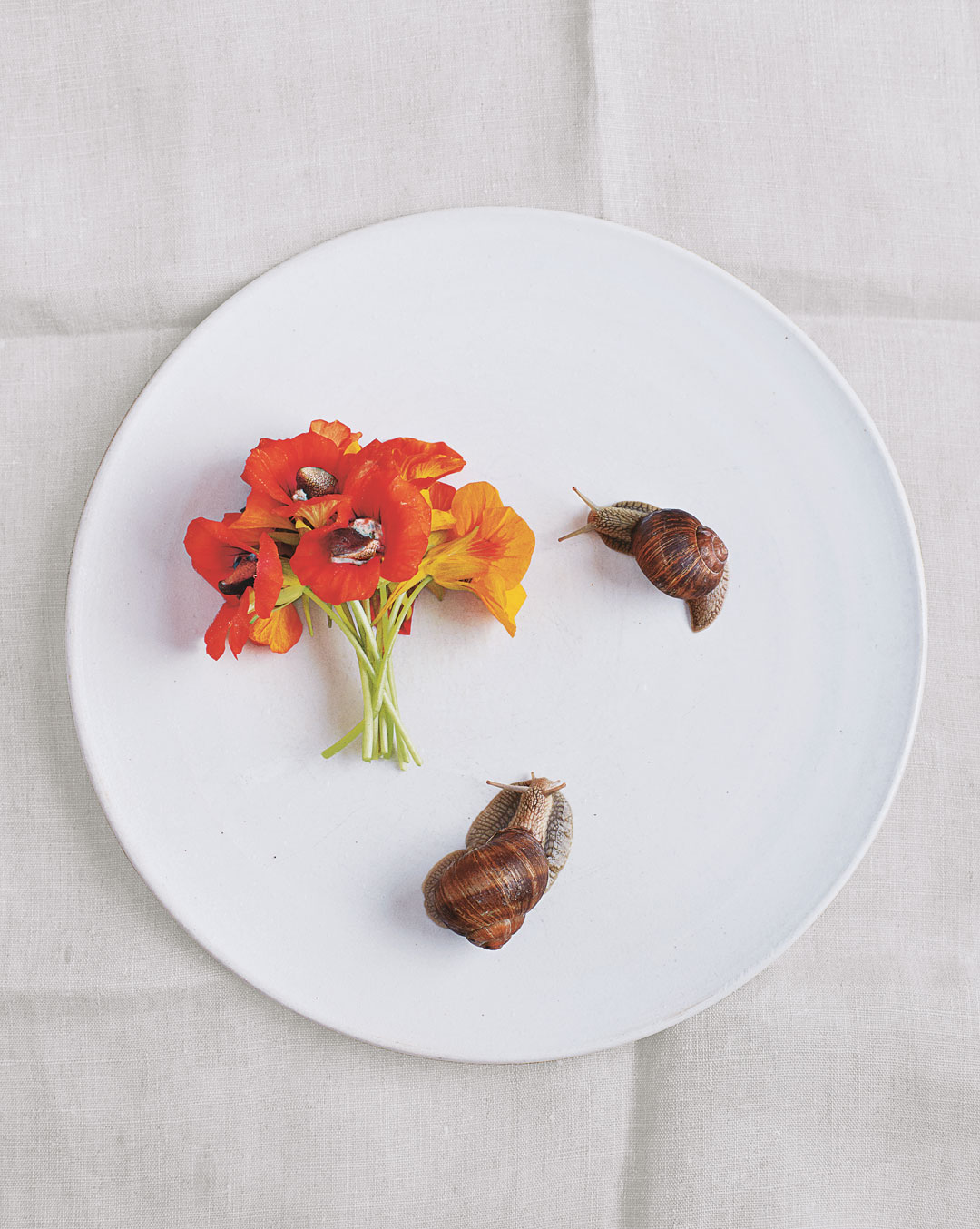 Nasturiums and cooked snails. From A Work in Progress: A Journal

Acknowledge you’ve got a problem 7 February. “I was burned out. Success is a marvellous thing, but it can also be dangerous and limiting. Suddenly we’d become a fine-dining establishment and had begun listening to questions about whether we needed real silverware, or if the waiters should wear suits...

“This year has to be spent well: calming down, finding a new beat, figuring out how to make what we do more playful, so we can last for twenty years, or more. Like my good friend Massimo Bottura once said when I called him up, ‘Hey Massimo, how are you?’ ‘Ey René, I’m gooood,’ he said with a thick Italian accent, ‘sitting heerre looking at the chestnuut trees, wondering how I can grow sslowly like them.’” 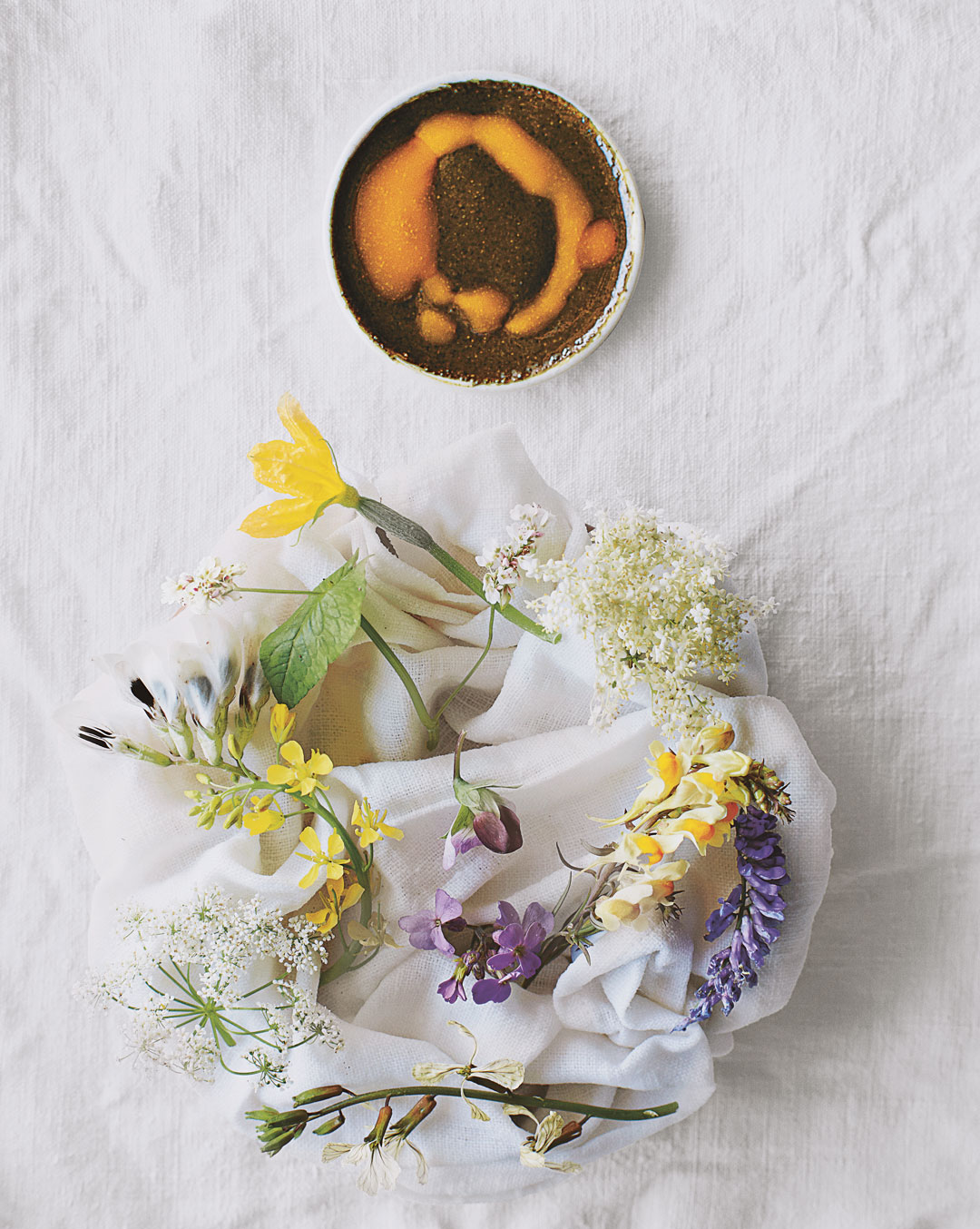 A plateful of flowers and some vinaigrette. From A Work in Progress: A Journal

Find where your problems lie 21 February. “The past year and a half, or maybe even two, we’ve had a menu with all these dishes on it that are so great we don’t change them. This has meant certain ingredients have become sacred in a sense, and not to be tampered with.

“We’ve been content that we’ve achieved the best we can achieve and this has led to the hubristic idea that a well-received dish can’t really be improved on. The interesting question is – why has this happened? Success. That’s the short answer. And that’s the great paradox of success – it limits you.” 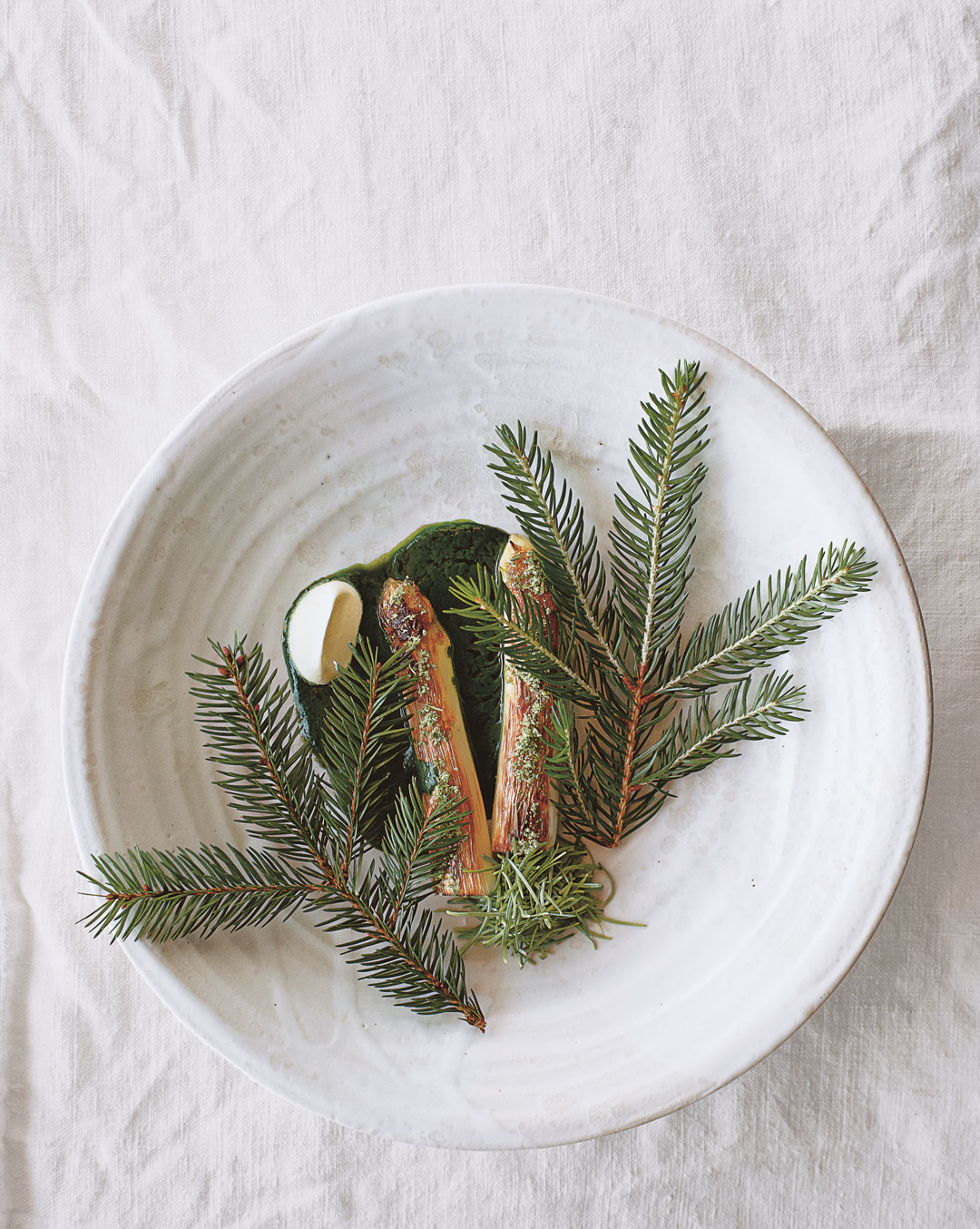 Grilled asparagus and tender spruce. From A Work in Progress: A Journal

Try something new 17 February. “All the guys in the test kitchen perked up when I said, ‘Trash cooking, people. I’m not saying this as a joke anymore – why don’t we let it steer us?’ A project where we build dishes out of the refuse that would normally find its way to the dumpster: vegetable peelings, meat trimmings, things like that.

“We peeled the skin from cod heads. They looked bizarre and outlandish, but also a little mesmerizing. One of the interns laid a leftover cod-head skin, the ‘fish face’, in the dehydrator to make a cod-head mask. He’s from California, so, somehow, we feel it’s OK. The head was roasted in the smoker with birch wood, at a very low heat. The cod head contains some of the tastiest parts of the fish, the jaw, tongue and chin, all better than the fillets. But the real gem was a surprise to all of us: it sat just under the eye, a small strip of meat with a sublime texture and flavour. Not discarding the trash is a good reminder not to be too complacent.” 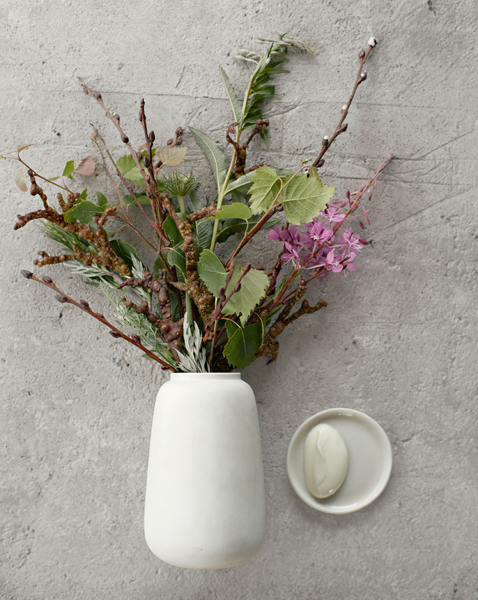 Branches. From A Work in Progress: A Journal

Take pleasure in the simple things 12 March. “Spring was in the air today, the sun shone and there was a mild breeze. It was almost 10°c. I’m astonished at what the weather does to our temperament. The atmosphere in the kitchen was giddy and relaxed, everyone welcoming the sunlight like a long-lost friend. We all know the winter won’t return again now. It was just the perfect ending to a week: a Saturday with lovely weather, the cooks peeling their vegetables outside, feeling energized. Finally slamming the door on that long, dark winter. I cancelled Saturday Night Projects and all the tests we were supposed to do. The first real day of spring is like a birthday, Christmas, Hanukkah, something like that – a celebration in which the usual material gifts are replaced by the knowledge that nature is springing up. I spent the whole day out of the kitchen, scratching around the forest floor, lifting dead leaves and branches, searching for signs of life: the wild garlic that marks the beginning of the gastronomic year.” 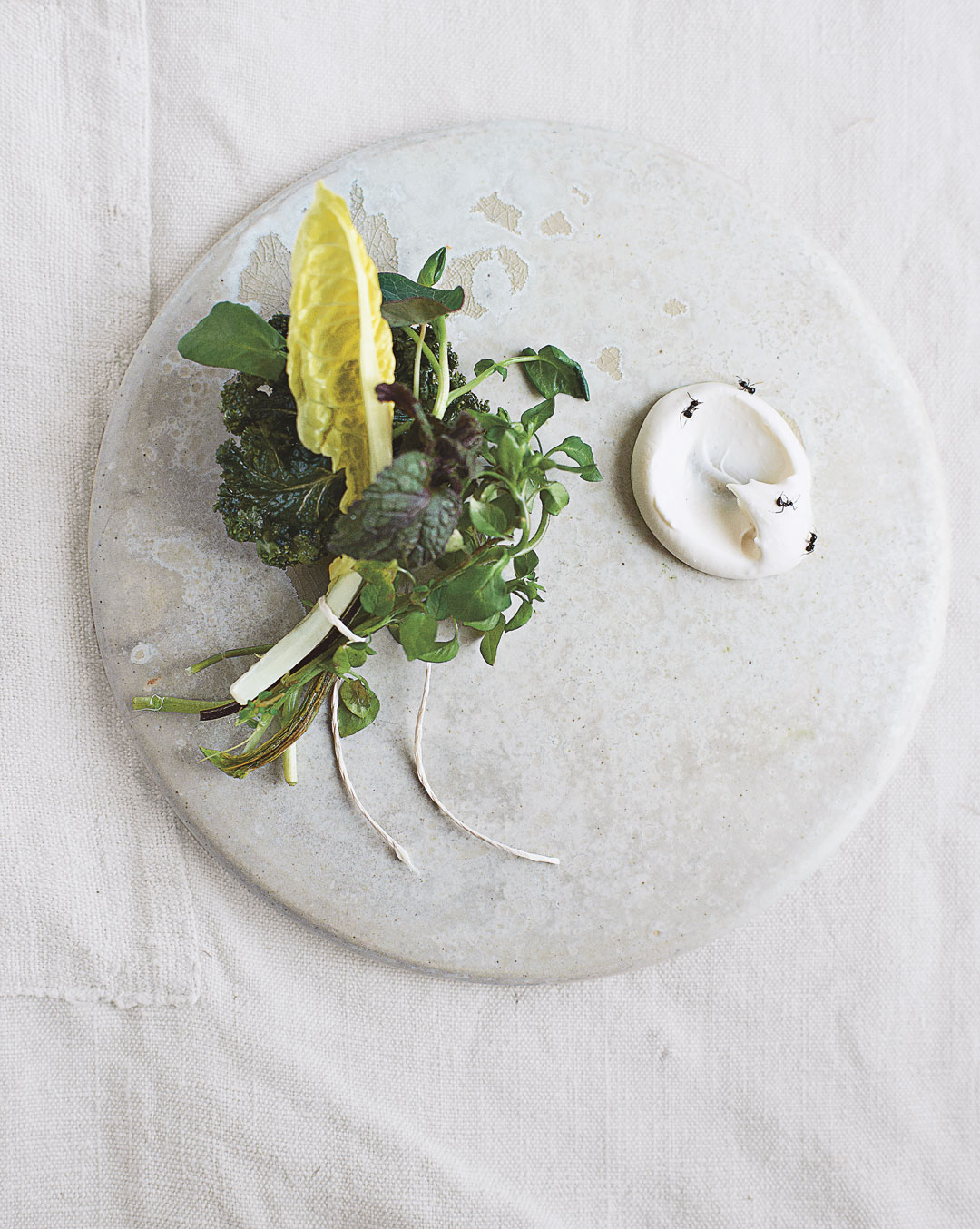 Bouquet of green and black ant dipping. From A Work in Progress: A Journal

Remember, there will be bad days 2 July. “I was woken by an ominous telephone call from our strawberry supplier; during the night the rain had ruined their crop. My first thought was: fuck, now we have to change two dishes on the menu because they’re out of strawberries. But as it turned out, strawberries were the least of our problems.

“Firstly, the fish didn’t arrive until the middle of lunch. Four other dishes required some hocus-pocus because of the wrong vegetables coming in, or products that were below par. Then, to finish off the train wreck, the weather itself attacked us. It went from being quite cold, almost autumnal weather of 10–12°c, to 26°c and humid as a sauna. We stood in the kitchen, sweat seeping into our eyes, watching pitch-black and green clouds boiling towards us. Then the sky opened and dropped the ocean on us: 15 centimetres in an hour and a half. Our basement flooded up to the ceiling. Ten people had to spend the evening bailing water away from the front door. We barricaded the entrance with all the linen we had on the premises, like sandbags against a river. Somehow we still managed to run a restaurant with a full house, despite the fact that at one point we had 10 centimetres of water in the back kitchen.” 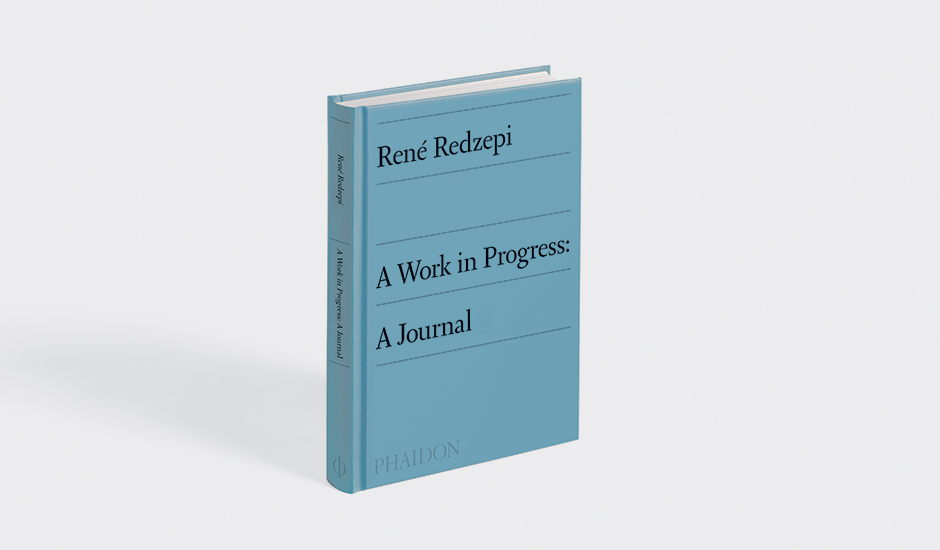 A Work in Progress: A Journal

Try to gain perspective 16 July. “I believe what we’re cooking here and now at Noma is ultimately something that comes from within; reverberations from long ago, rather than a cerebral construction. Looking back at the last six months, the best moments have happened when something in the present connects with stories from the past. ‘What is creativity?’ I’ve been asking myself while writing this journal. I’m not sure, but tonight I will answer it like this: creativity is the ability to store the special moments, big or small, that occur throughout your life, then being able to see how they connect to the moment you’re in. When past and present merge, something new happens.”

To read these and plenty of other entries in full order a copy of A Work in Progress: A Journal here; for more on Noma get Noma.

A Work in Progress, A Journal : René Redzepi

The world-famous chef René Redzepi's intimate first-hand account of a year in the life of his renowned restaurant, noma

A Work in Progress: A Journal is a highly personal document of the creative processes at noma and the challenges faced by its chefs over a twelve-month period in an unspecified year of the restaurant's history. After a month of vacation, Redzepi made a resolution to keep a journal and to dedicate a year to the creativity and well-being at noma. The result is an unusually candid, and often humorous, insight into the inner workings of one of the food world's most creative minds. Originally featured in the bestselling A Work in Progress, first published in 2013.

René Redzepi became head chef and co-founder of noma in 2003. Since then he has become one of his generation's most respected chefs with noma winning the Best Restaurant in the World award four times and himself being honoured in Time's 100 Most Influential People. After relocating his entire team to open noma pop-up residencies in Tokyo, Japan (2015), Sydney, Australia (2016) and Tulum, Mexico (2017), Redzepi returned to Denmark to reopen noma in February 2018, having closed the restaurant in its original home on Copenhagen harbor twelve months earlier. Redzepi also established the not-for-profit MAD Symposium in 2011 to galvanize the creative potential of the global cooking community.

"Insightful... The creative workings inside the head chef's mind to the highs and lows that came with running a restaurant with such a huge amount of expectation riding on it... A journal peppered with humour and the warmth of team spirit. However, it's not all self-reflection. Fans will also get the chance to roll up their sleeves and cook. Twenty recipes close the book polished off with some incredible photography by Ditte Isager."—FineDiningLovers.com

"A surprisingly personal journal of a year at the original Noma and 100 recipes."—The New York Times