A history of Ferrari F1 champions in 8 helmets

Scuderia Ferrari may still paint its cars an evocative shade of red, but today, motor racing is, thankfully, rarely a blood sport. Racing drivers still crash, however technological advances and improved safety measures, in helmet design and elsewhere, mean those crashes are less often fatal. Here’s how, over five decades, Ferrari’s drivers have gone from wearing horse-riding gear through to heavily advanced head protection, courtesy of our new book Ferrari Under the Skin. 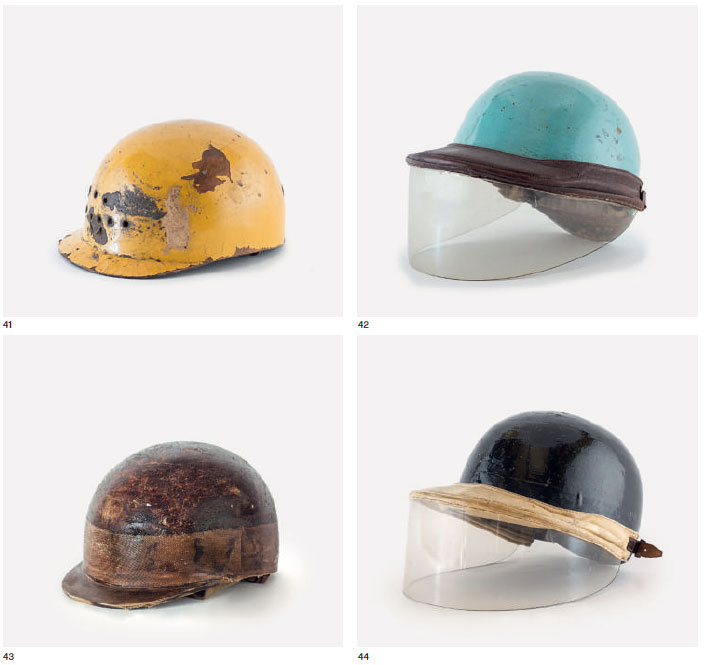 The first image shows the Argentinean driver José Froilán González’s helmet (41). As the text explains, “González only ever owned one helmet throughout his entire racing career, he must have worn this when achieving Ferrari’s first ever Grand Prix win in 1951 [at the British Grand Prix].”

The second (42) is Albert Ascari’s first hard helmet. Ascari first found fame as a motorcyclist, before switching to Formula One. He went on to become the only man to win the World Championship on both two and four wheels, and had a reputation for being a careful driver. Unfortunately, his noted skill and caution did not prevent him from being killed at the Autodromo Nazionale Monza in 1955, aged just 36.

This bit of headgear (43) is believed to have been designed not for motorsport, but for polo. Nevertheless, this didn’t stop another Argentinean racing champion, Juan Manuel Fangio, from wearing it during his illustrious career; Fangio won the Formula One World Drivers’ Championship five times during the 1950s.

In 1953, all Formula One drivers were compelled to wear helmets. However the designs – like the cars – developed substantially over the following decades. This 1958 helmet (44) belonged to the British driver Mike Hawthorn, who won the 1958 World Championship for Ferrari. The exaggerated rain visor was typical of the time; Hawthorn favoured this style of helmet over goggles, and wore the visor even when it wasn’t raining. 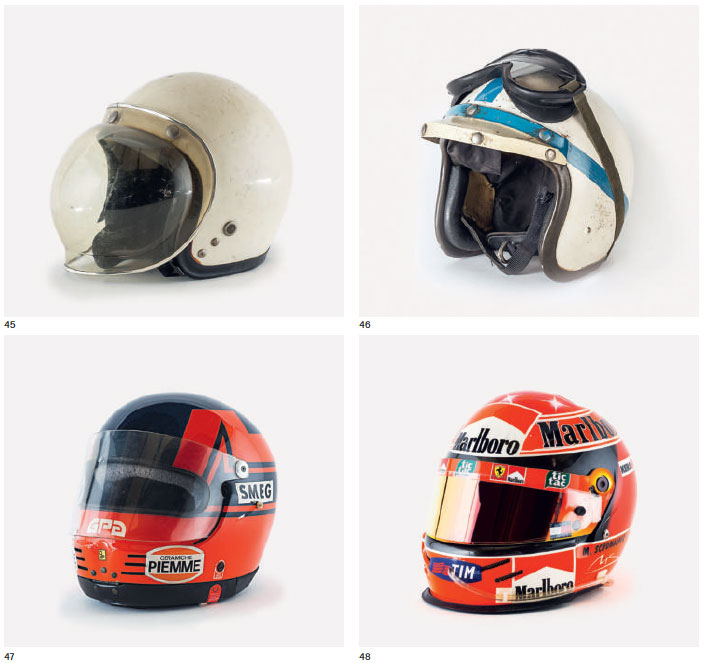 John Surtees, 1964 World Champion, wore this helmet (46) during his most successful season. Though Surtees’ open-face helmet was paired with a pair of goggles, in 1968, F1 drivers began to wear full-face helmets, abandoning earlier, outmoded styles of helmet.

By the time of Gilles Villeneuve’s final season in 1982, helmets were providing space for advertising media, as can be seen in this helmet (47). Come the end of the century Ferrari’s racing helmets were not only far tougher than earlier models, but also much lighter - a lightweight helmet decreases the likelihood of whiplash injuries. Seven-times World Champion Michael Schumacher wore many helmets during his career. He wore this one (48) at the Monaco Grand Prix in 2000. 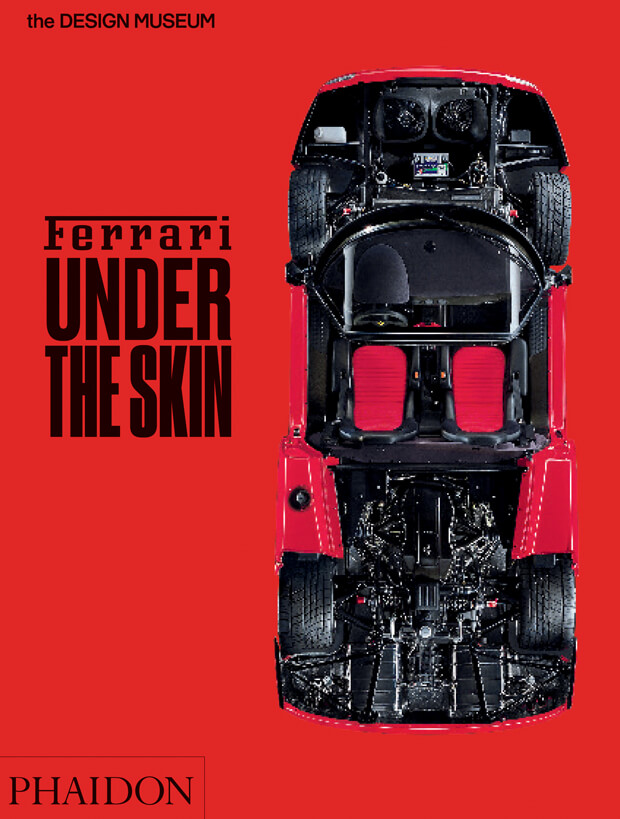 Ferrari Under the Skin

For more on Ferrari from its F1 successes through to every aspect of its beautiful road cars, buy a copy of Ferrari Under the Skin here.

Ferrari: Under the SkinDesign Museum

A substantial work, providing exceptional insights into Ferrari the man, Ferrari's design, and Ferrari the legend.

Ferrari is an extraordinary company that emerged as World War II receded in Italy, combining collegiality, an almost religious dedication, and dictatorship in equal parts. Above all, it was impelled by the remorseless ambition of its founder Enzo Ferrari. Richly illustrated with personal ephemera, technical drawings, master models, and luxurious product shots, this in-depth exploration of Ferrari - the man, company, cars, and clientele – reveals what goes into the making of, many would argue, the world's most desirable car brand.

Andrew Nahum is principal curator of technology and engineering at the Science Museum, London. In 2005, he led the curatorial team in the development of the exhibition 'Inside the Spitfire', and previously directed the creation of the major new synoptic gallery at the museum on the history of technology and science entitled 'Making the Modern World'.

"Depending on your interest in cars, we imagine you already know a fair bit about Ferraris. However, perusing Ferrari: Under The Skin, a new Phaidon book that ties in with an exhibition at London's Design Museum, we discovered many interesting things we didn't previously know about the company... John Lennon's first car was a Ferrari... They could have built Ferraris in Detroit... Enzo Ferrari was nearly eaten by wolves... The prancing horse logo was inspired by an Italian pilot... Ferrari's image was created by another company."—MrPorter.com

"Richly illustrated with history, technical drawings, master models, and striking photography of one of the most famous racing machines of all time. A must-have for Ferrari fans, as well as anyone wanting to know more about one of the most compelling cars in history." —Watch Journal

"While it is posted as the official catalogue of the exhibition itself, it is actually rather more than that, being a series of essays richly illustrated and beautifully presented... A very well produced summation of the famous marque's singular mystique."—Automobile

"An item of quality - as aesthetically pleasing as it is informative... Undoubtedly a tome over which one can easily and happily pore."—On: Yorkshire

"If you missed the superb exhibition at the Design Museum, London, don't despair. This fantastic book supplies an excellent overview... You're almost certain to find something you never knew about Ferrari... There are insights into not only Ferrari the man, but the nuts and bolts of what makes the Ferrari brand tick."—Auto Italia

More on A history of Ferrari F1 champions in 8 helmets 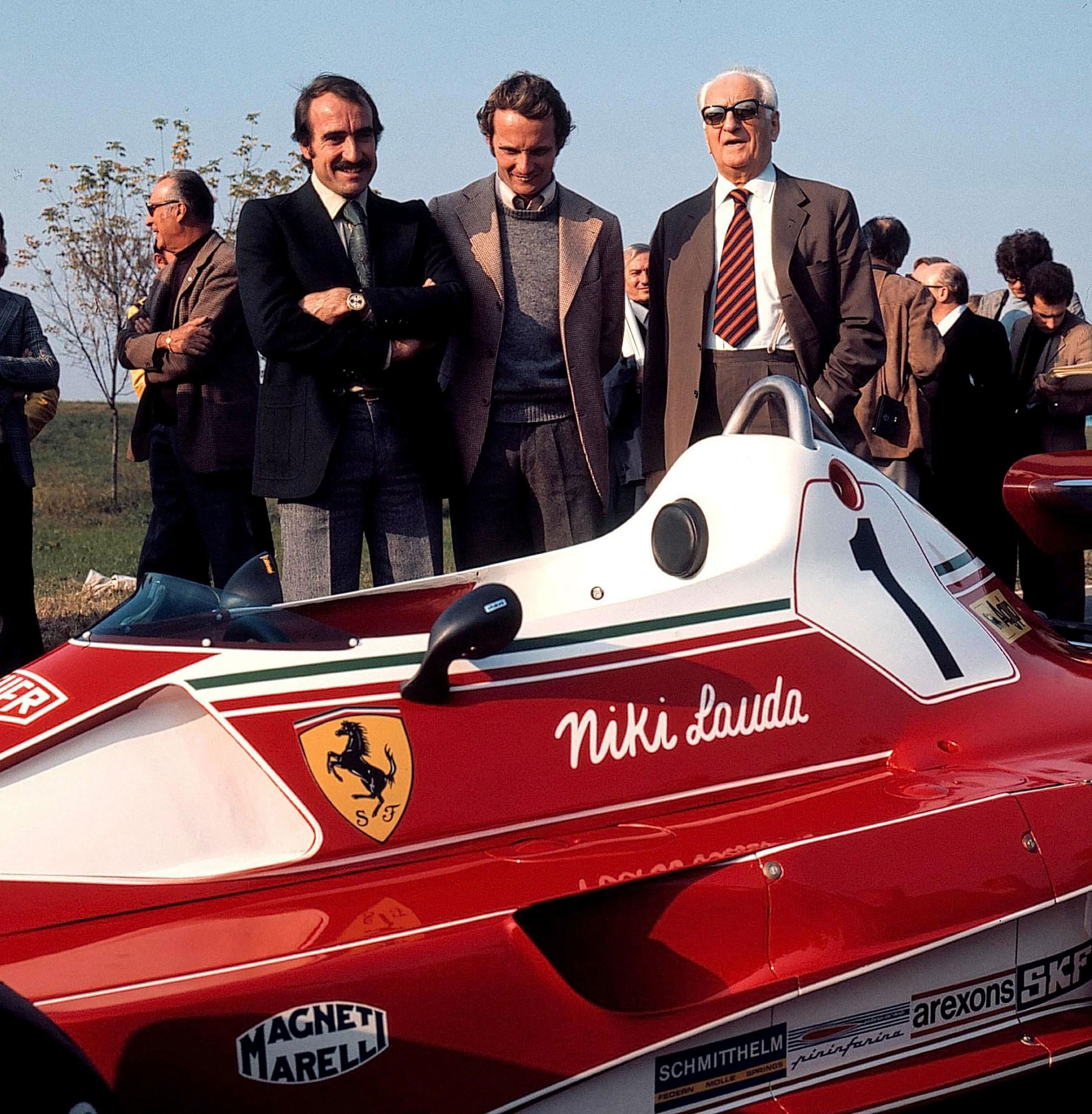