Today, we know Jenny Holzer largely for her Truisms, those flint-hard, aphorisms, coined between 1977 and 1979 that run across billboards and street posters. However, a new Tate Modern exhibition, which opened yesterday, shows that Holzer originally spread her words over a surprisingly wide variety of media.

In ARTIST ROOMS: Jenny Holzer, the Tate is not only displaying posters and electrical pieces, but also polystyrene coffee cups, and even condom wrappers. The cups and prophylactics (which bear Holzer’s dispiriting Truism ‘Men Don’t Protect You Anymore’ form part of a compact, yet fulsome show, which also features some of Holzer’s earliest works: copies of text book diagrams. 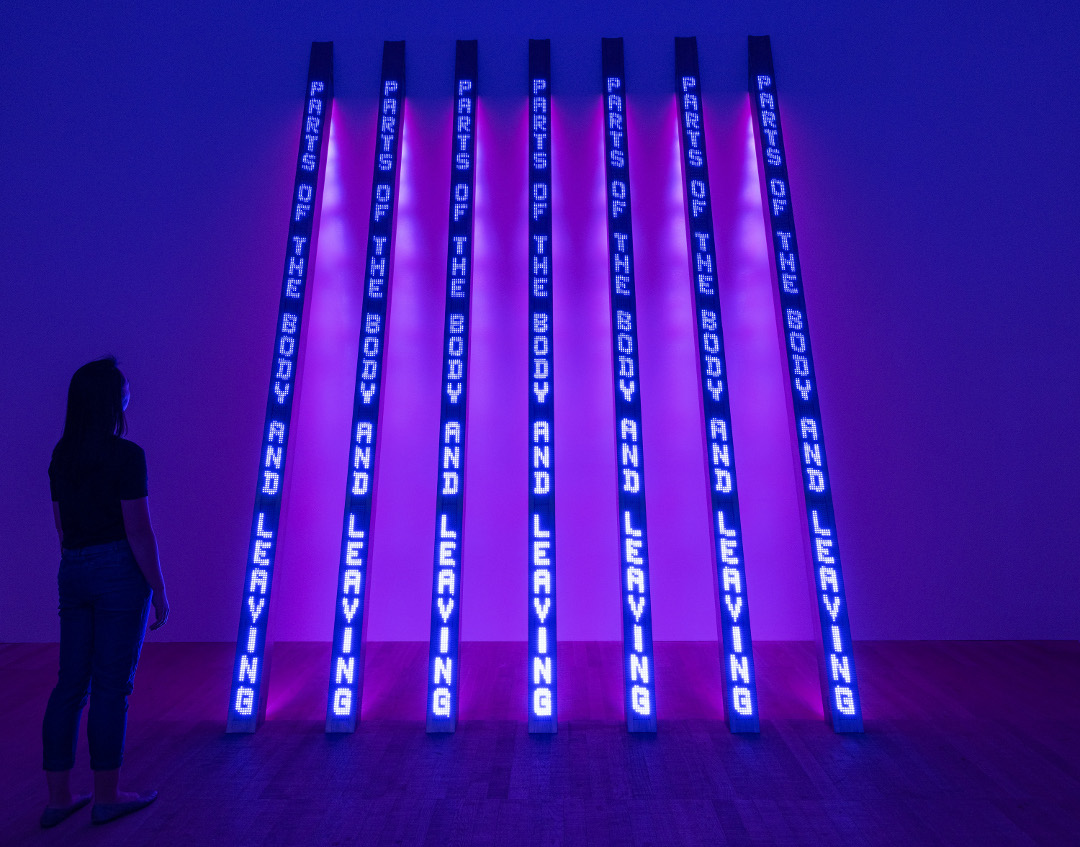 “I had to draw perfectly on the first time,” the artist recalls of this early series in our monograph, “and if I couldn’t, I’d stop and start a new one. It was a horrible test.”

These unusual drawings are accompanied by later, more familiar pieces, such as Holzer’s Redaction Paintings, in which the artist took declassified government documents relating to American and British interventions in the Middle East, and reproduced them, turning the censored blanks into Malevich-style abstract blocks.

There are newer pieces too, relating to the wars in the Middle East and Syrian refugees, proving that Holzer, despite her early success, moves with the times. She, like Robert Mapplethorpe and David Wojnarowicz, was a key figure in the 1980s culture wars, yet she is also – thank heavens – still around today, to keep the fight going.

For more on Holzer and her fellow artists get Art and Today; and for more on engaging texts, get You Had Better Make Some Noise.

You Had Better Make Some Noise Phaidon Editors

You Had Better Make Some Noise brings together the words of social activists, revolutionaries, artists, writers, musicians, philosophers, politicians, and more - galvanizing us all to do the same. Familiar figures - Thomas Paine to Bertrand Russell, Augustine to Gloria Steinem, Harvey Milk to Ai Weiwei, James Baldwin to Margaret Mead - are joined by a chorus of voices that have made their own indelible marks on the legacy of protest and progress.

"When the history of our times is written, will we be remembered as the generation that turned our backs in a moment of global crisis or will it be recorded that we did the right thing?" Nelson Mandela asked that question, and this positive and reinforcing book urges us to heed the call.

"I am proud to be included in this wonderful book. So much hard earned wisdom presented here, while capturing, at the same, the vibrant energy that moves us all toward justice."—Susan Griffin, activist and author

"As we all spin in a whirlpool of ideas, statements and unrest, find emotional life rafts in this punchy collection... You Had Better Make Some Noise distills inspiring, rousing statements from great philosophers, activists, revolutionaries, and creatives into a pocket-sized collection of quotes. The bold black white and yellow book brings a burst of intellect to the coffee table, as you flick through or dip in for moments of galvanising thought and inspiration."—CultureWhisper.com

"Words to inspire... Brings together enduring wisdom of citizen activists, artists, writers, politicians, visionaries and intellectuals... Want to display these words somewhere more prominent. The perforated pages mean you can pull out the quotes for daily reinforcement."—Project Calm

"What can only be described as a timely collection, You Had Better Make Some Noise brings together the words of social activists, revolutionaries, artists, writers, philosophers and politicians who have contributed to the fight for progress and freedom."—ItsNiceThat.com

"Bringing together quotations from visionaries who have been catalysts for change throughout the ages, You Had Better Make Some Noise is an inspiring collection of wisdom through the ages. Featuring iconic quotes from Nelson Mandela, Chinua Achebe, James Baldwin and more, these are words to live by, words that couldn't be more timely right now."—HungerTV.com

"This collection is motivational and visually striking - and because the pages are perforated, you can rip your favorites out to display and share."—InStyle

"Some of the most inspirational quotes from history's greatest thinkers and changers."—Buzzfeed

"Turns on the theme of fighting for freedom... The text is presented in a "smart design", using yellow, black and white for fonts and block backgrounds throughout; many of these quotations here have the look of propaganda posters or protest placards... [An] aspiration to serve as a meaningful call to arms."—TLS (Times Literary Supplement)

Art Is the Highest Form of Hope & Other Quotes by Artists

Every Day a Word Surprises Me & Other Quotes by Writers