Four ways of looking at Giacometti

Heading to the Tate show? Then here are a few tips for getting the most out of the great man’s art

The Tate Modern’s blockbuster Giacometti retrospective – the first major show in the UK for 20 years – opens in London today. Planning to visit? Then you might benefit from a little bit of light reading, courtesy of our art books. Here’s four things to look out for in the show. 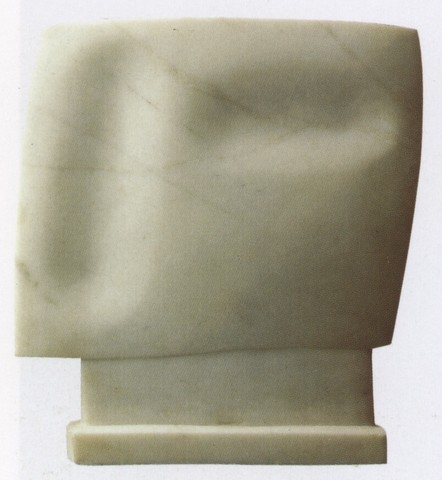 Head (1927) by Giacometti. As reproduced in The Story of Art

Simplicity EH Gombrich examines an early Giacometti sculpture, Head (1927) in The Story of Art. The great art historian acknowledges that it “may remind us of the work of Brancusi, though what he was after was not so much simplification as the achievement of expression by minimal means. Though all that is visible on the slab are two dells, one vertical, one horizontal, it still gazes at us.” 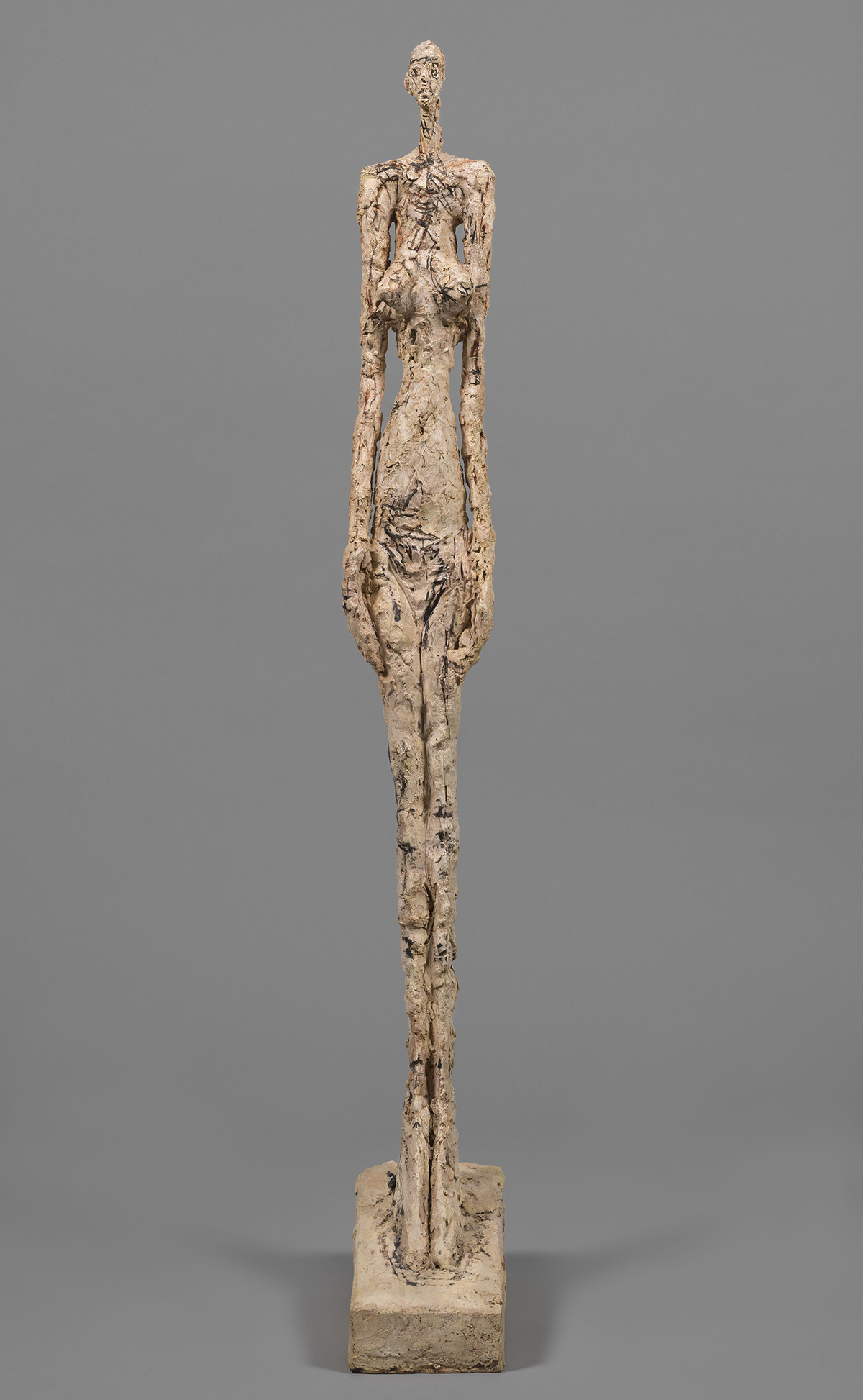 Woman of Venice V (1956) by Giacometti. Image courtesy of The Tate

Space  In our sculptural survey The Elements of Sculpture, Giacometti’s 1948 sculpture Standing Woman is examined in spatial terms. “In Standing Woman, the normally passive space surrounding all objects in our world has violently torn away the surface of the figure, exposing its linear core,” writes Herbert George. “And the emaciated sculpture is consumed by the same space we had assumed to be passive. The space that surrounds and supports Standing Woman has become a present force more real than the materiality of the figure.” 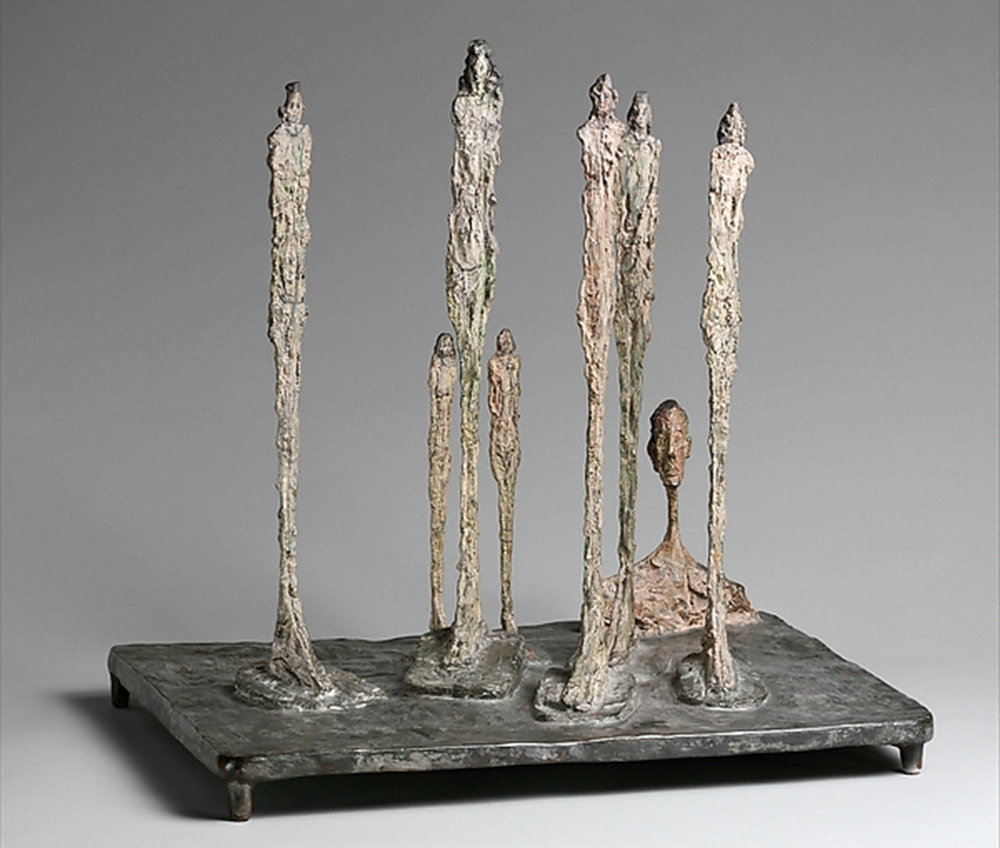 The Forest (Composition with Seven Figures and a Head) (1950) by Giacometti. As reproduced in The Elements of Sculpture

__Scale__ Elements of Sculpture also draws on Giacometti’s 1950 work The Forest (Composition with Seven Figures and a Head) when describing the uses of scale in sculpture. “On first view, the impossibly long thin proportions of the seven figures are one of the most striking aspects of the work; their heads are too small in proportion to their elongated bodies while their feet are too large,” writes George.

“The tallest figure is 23 inches high and they are all female. The two figures at the back are much smaller than the five at the front, creating a false perspective that visually pushes the taller five forwards. But when we consider Scale, it is the portrait head at the rear that becomes the most interesting. The figures outnumber the head and they are the ‘forest’ that defines half of the work’s narrative. The other half, the head, interrupts their closed conversation. And it does so because of its scale. With its long neck and broad shoulders, it is proportionally much larger than the figures and, even though it is shorter, it has a more life-like presence than the figures. This discontinuity in scale, proportion and real size challenges the viewer with a seemingly impossible paradox. Both the figures and the head share the same ground plane and space, so if we accept the scale and proportions of the figures, how can we accept the presence of the bust in the same composition? Giacometti utilizes Scale here to construct a disturbing but carefully considered improbability that challenges not only our imagination but also our innate sense of the probable.” 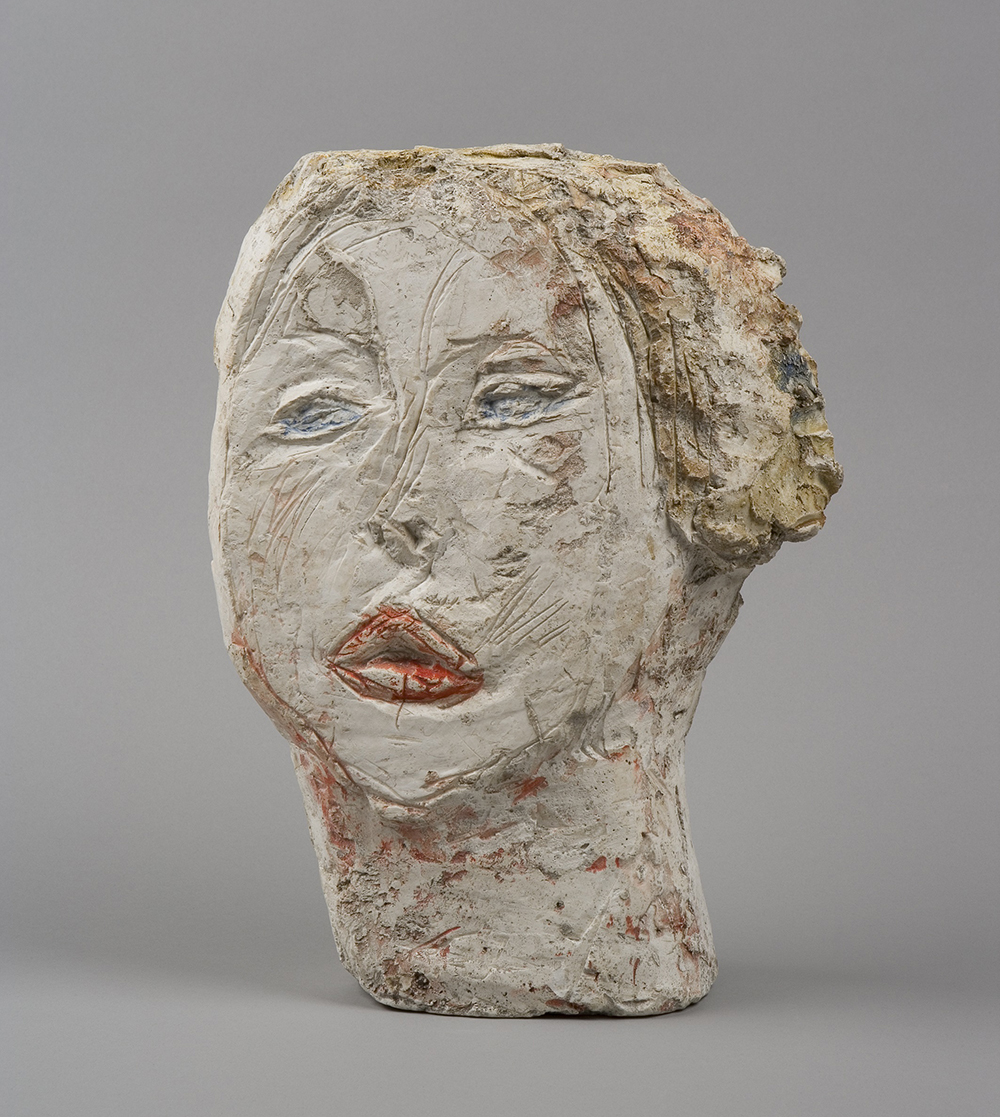 Sympathy Giacometti prized life over art. “In a burning building,” he is quoted as saying in our book Art Is the Highest Form of Hope & Other Quotes by Artists, “I would save a cat before a Rembrandt.” Some read this as evidence of some animal-rights agenda, yet it’s probably wiser to see the remark’s emphasis on life and the lived experience, in a world filled with abstraction, industrialisation and loneliness. As Morgan Falconer puts it in his post-war painting survey, Painting Beyond Pollock, “Europeans like Bacon and Giacometti would isolate the human figure in order to suggest its lonely confrontation with metaphysical questions.”

Find out more about the Tate's show here. Buy a copy of Elements of Sculpture here; buy a copy of The Story of Art here; get Painting Beyond Pollock here; and get Art Is the Highest Form of Hope here.

The Elements of Sculpture Herbert George

The Elements of Sculpture is the essential viewer's guide to experiencing sculpture. Richly illustrated with photographs of artworks both contemporary and classical and written by a sculptor and teacher with lifelong experience, it arms the reader with the tools and vocabulary with which to view a vast range of sculptures. Insightful and thought-provoking, it is accessible to the widest audience; as a primer for both students and general readers, it provides a new way of looking at, experiencing and discussing the art of crafting in three dimensions.

Compelling and jargon-free, The Elements of Sculpture discovers and isolates the attributes – from the most physical to the most ephemeral – that make up an essential three-dimensional visual language; the very elements that form the tools sculptors use to create their art: Material, Place, Surface, Edge, Texture, Colour, Scale, Mass, Centre of Gravity, Volume, Space, Movement, Light and Memory. By teaching us how to look at and experience sculpture in the same way that sculptors think about sculpture, Herbert George provides us with the tools for understanding and appreciating the three-dimensional object, demonstrating how we can begin to communicate using the language of sculpture. Specifications:

Herbert George is a sculptor and retired teacher. As a sculptor, his work has received support and recognition from the New York State Council on the Arts and the John Simon Guggenheim Fellowship. In the 1970s he founded TRACKS, A Journal of Artists’ Writings and taught the history of sculpture at Cooper Union in New York. In 1985, he moved to the University of Chicago where he taught undergraduate and graduate sculpture. He retired from teaching in 2006, and was awarded a Getty Museum Fellowship in 2007.