A Movement in a Moment: Realism

How Gustave Courbet, born today, 10 Jun, in 1819, helped create a movement around the painting of ordinary folk

In 1849 the painter Gustave Courbet who was born today, 10 June, in 1819, drove his family carriage along a road near the village of Maisières, near his hometown of Ornans in eastern France. He passed two labourers – a man and a boy – breaking rocks into gravel for the roadbed. The artist invited the pair to his studio and had them pose in a painting. Later, he described the work to a friend in a letter:

“It is composed of two very pitiable figures: one is an old man, an old machine grown stiff with service and age. His sunburned head is covered with a straw hat blackened by dust and rain. His arms, which look sprung, are dressed in a course linen shirt. In his red-striped vest you can see a tobacco pouch made of horn with copper edges. At the knee, resting on a straw mat, his heavy trousers, which could stand by themselves, show a large patch; through his worn blue socks one sees his heels in his cracked wooden clogs.

"The one behind him is a young man about fifteen years old, suffering from scurvy. Some dirty linen tatters are his shirt, exposing his arms and sides. Here and there the tools of their tools are scattered on the ground: a hod, a stretcher, a hoe, a rustic pot in which they carry their midday soup, and a piece of black bread in a scrip. All this takes place in full sunlight, by a ditch alongside a road… I have made none of it up, dear friend." 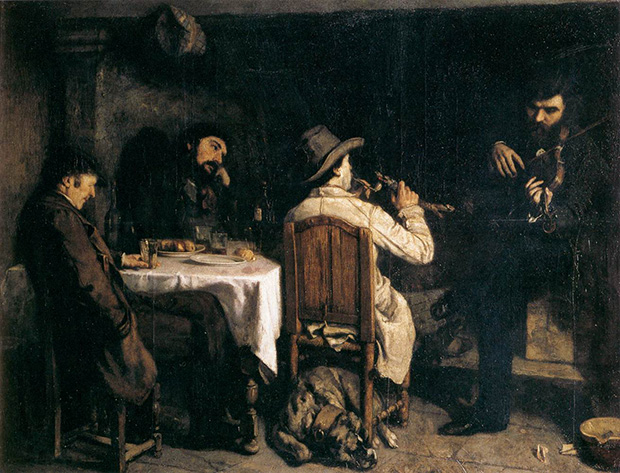 After Dinner at Ornans (1848-9) by Gustave Courbet

This was not the first painting Courbet had created of simple, rural folk, yet it became one of the most influential works in an artistic movement that came to be known as Realism.
This picture, although of heroic proportions (it measured 190cm by 300cm) focussed on a simple, unheroic subject. Courbet’s methods were unconventional also. His models were not actors or professional posers, as was more common at the time, but the very people the artist intended to represent.

His aesthetic, too, was not in vogue at that time. Romanticism was the prevailing style of the day, favouring beauty, fancy and drama over accuracy. However, Courbet, alongside fellow artists Honoré Daumier and Jean-Francois Millet, rejected what they saw as artistic distortions, and tried instead to create works of art that faithfully captured the world as they saw it. 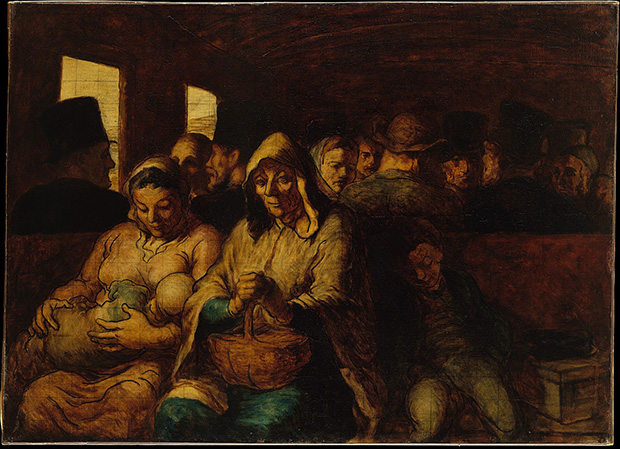 “When the painting was shown at the Parisian Salon of 1850-1 it provoked outrage, surely by the shock of recognition,” writes James H Rubin in our Courbet book. “Courbet shattered the myth of a timeless and classless rural ideal by representing figures whose social and economic specificity was corroborated by their material weight and physical exertion.”

Some critics rubbished the artist, while others, such as France’s leading Romantic painter Eugene Delacroix, recognised Courbet as both an innovator and a revolutionary. Indeed, the picture, created just after the tumultuous year of 1848, which saw revolutions in France, the Netherlands, Germany, Poland, Italy, and the Austrian Empire, as well as the publication of Karl Marx and Friedrich Engels’ Communist Manifesto, captured the spirit of the times.

“Mid-century unsentimentalized depictions of the working class – whether rural or urban – were inextricably linked to the political upheavals of 1848 and were therefore potentially troubling,” we explain in our compendium of artistic movements, Art In Time. “Courbet’s The Stonebreakers, with its monumentalized labourers pressed into the foreground, their bodies bent and awkward as they toil at their backbreaking task.

A Burial at Ornans: Historical Painting (1849-50) by Gustave Courbet

“These peasants are not reassuringly picturesque accents embedded in a panoply of nature, but heroically scaled and unidealized figures, at once brutal and honest in their representations and at odds with the expected finish of academic paintings.”

The term Realism began to be applied to Courbet, Daumier and co, and in 1855 Courbet wrote a short essay now known as The Realist Manifesto. In it he stated that he did not want to “attain the useless goal of art for art’s sake,” but instead “to translate the customs, the ideas, the appearances of my epoch according to my own appreciation of it, to be not a painter but a man, in a word to create living art, that is my goal.”

Ironically, works such as The Stonebreakers are notable because of their prescience as much as their accurate depiction of their time, highlighting “the role of class distinctions [which] showed that future struggles would be related to the new conditions emerging in cities,” Rubin writes in our Courbet book, “The Stonebreakers proved how far society had yet to go.” 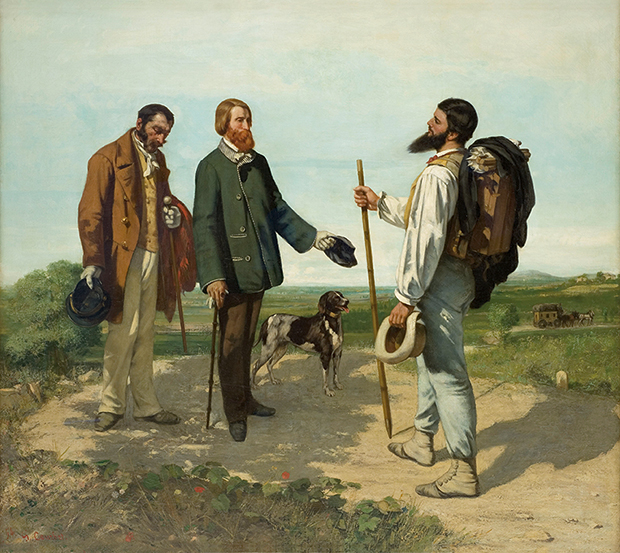 The Meeting, or Bonjour, Monsieur Courbet (1854) by Gustave Courbet

From today's perspective, Realism foreshadows the rural scenes of Cézanne and Van Gogh, the work of photographers such as Walker Evans and Dorothea Lange, US painters such George Bellows and Edward Hopper, as well as more explicitly didactic political art movements such as Social Realism. For more on Courbet buy this comprehensive introduction; for more on Realism and other art movements, get Art In Time.

James Rubin is Professor of Art History at the State University of New York, Stony Brook, and also teaches at the Cooper Union in New York City. His books include Impressionism in the Art & Ideas series, Realism and Social Vision in Courbet and Proudhon and Manet's Silence and the Poetics of Bouquets.

"An eloquent and intelligent account of Courbet's work. Rubin manages to find a level which makes the book relevant to present scholarship on Courbet, but also eminently accessible to undergraduate students."—John Kear, Department of the History and Theory of Art, University of Kent at Canterbury

More on A Movement in a Moment: Realism 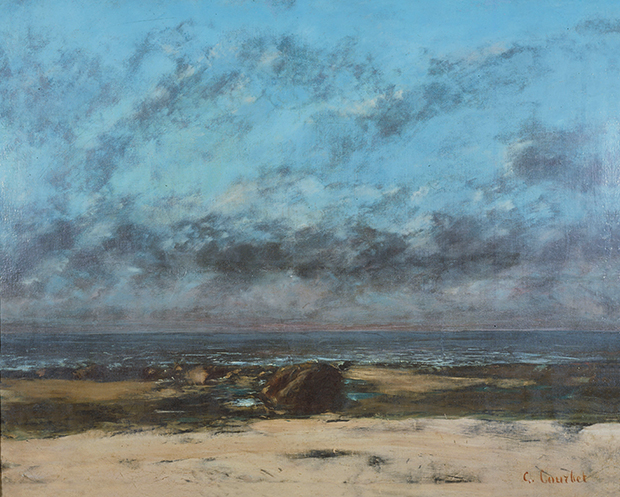 How Courbet retains the power to shock