Willem de Kooning is best known as a painter, having created both bold, abstract-expressionist works on canvas, and striking, highly sexual figurative paintings too. Yet a little-seen sculpture, which goes on sale at Christie’s in New York later this month, demonstrates how wonderful his three-dimensional work was too.

De Kooning had sculpted earlier in his career, yet he only began to work sincerely in bronze and clay at the age of 65, after spending most of July 1969 with the sculptor Herzl Emanuel in Rome. Returning to New York, he produced series of small-scale, mainly abstract works. Although the artist was not overly pleased with these sculptures, he considered enlarging the small-scale pieces after the British sculptor Henry Moore praised them, saying they had “such strength, such nervous energy.” 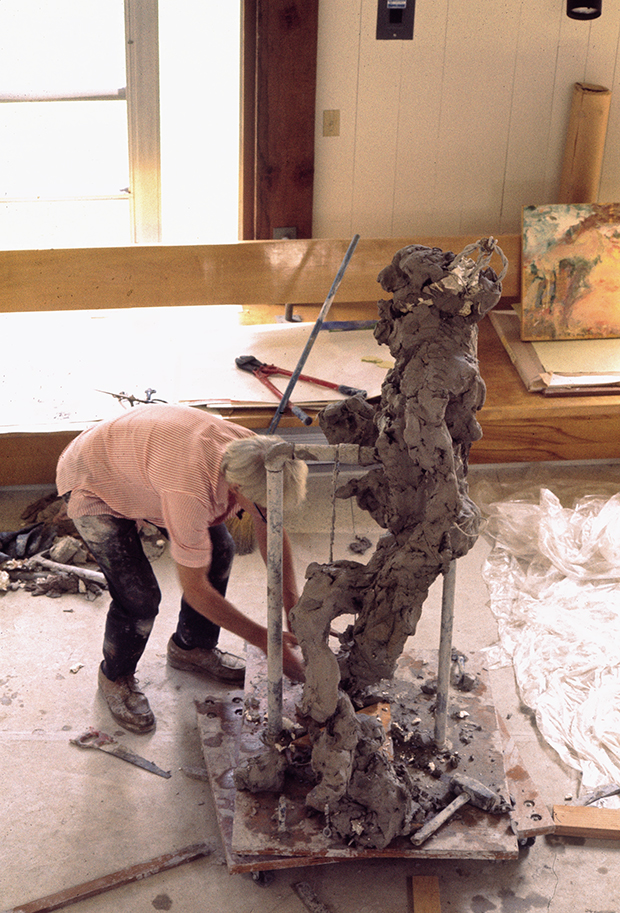 De Kooning working on Clamdigger (1972). Photograph by Hans Namuth. As reproduced in A Way of Living: the Art of de Kooning

Indeed, having successfully scaled-up one of these works, de Kooning decided to execute new sculptures on larger scale, drawing inspiration from the men he saw digging for shellfish when he rode his bicycle out by the beaches of Montauk in Long Island.

In keeping with some of his paintings, these were broadly figurative works, with expressionistic whorls and surface details. Assisted by the fellow sculptor, David Christian, de Kooning constructed flexible armatures, allowing the artist model and remodel his clay. 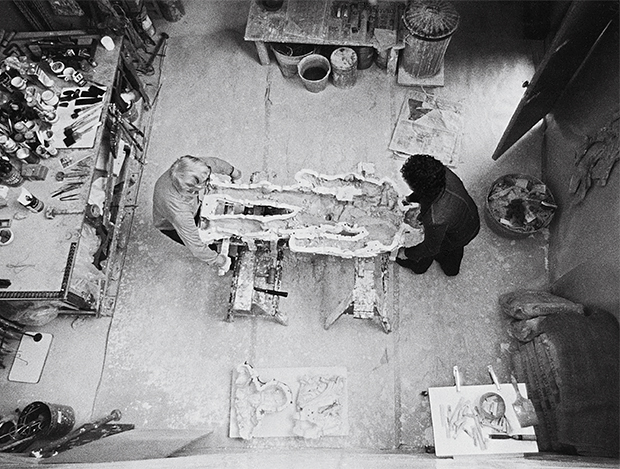 De Kooning and David Christian with a mould for Clamdigger,1972. Photograph Hans Namuth. As reproduced in A Way of Living: the Art of de Kooning

In our current monograph, A Way of Living: the Art of de Kooning, author Judith Zilczer describes how the artist took to the medium of clay, delighting in the tactile experience of moulding and remoulding it. Interestingly, “de Kooning chose to wear oversize workman’s gloves while modelling, both to control the slippery clay and to exaggerate the expressionist markings of his figures as they kneaded and shaped the soft, wet sculptural medium.”

Although he would largely return to painting in later life, Clamdigger, one of 25 sculptures de Kooning produced between 1969 and 1974, remained in the artist’s personal collection, standing at the entrance to his studio until his death in 1997. 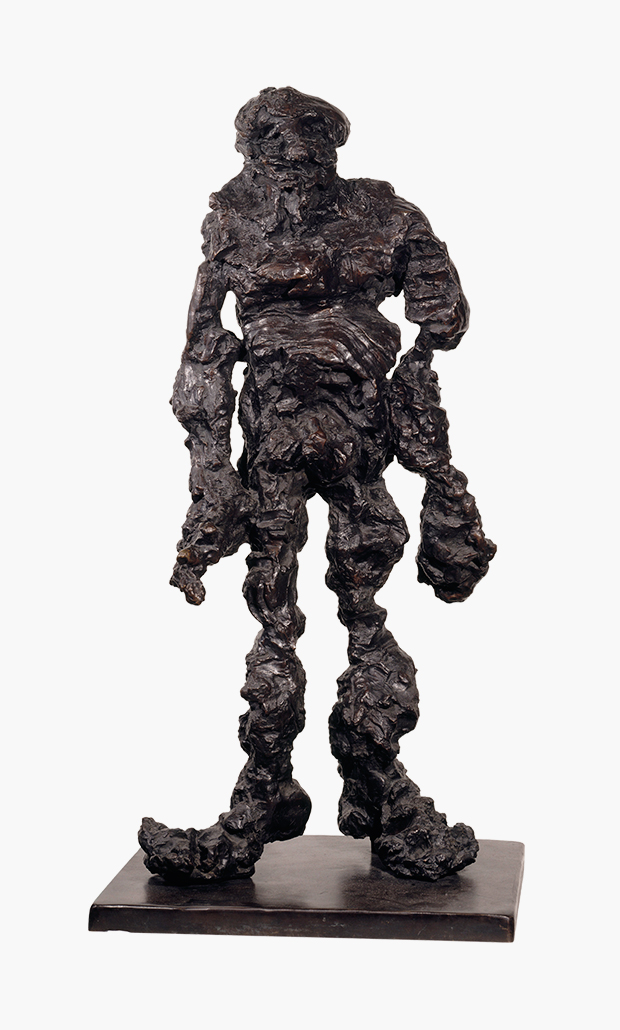 Some even suggest that this sculpture, de Kooning’s only full-sized male figure, could serve as a kind of ruddy, priapic self-portrait. Indeed, should we think of the act of clam digging both literally and figuratively? Zilczer believes so. “While the sculpture’s title ostensibly alluded to a fisherman figure-type that de Kooning had observed on the beaches of East Hampton, on another level the title coupled with the prominence of the male genitals creates a wry sexual innuendo.”

Something to bear in mind, when the piece goes under the hammer, at Christie’s post-war and contemporary art evening sale, on 12 November in Manhattan. For a richer understanding of this artist and his work, including this important sculpture, buy a copy of A Way of Living: the Art of de Kooning here.

Willem de Kooning (1904–1997) was one of America’s most influential artists. Born in Rotterdam, he moved to New York when twenty-two years old, where his European training setting him aside from his American contemporaries as he developed into one of the leading exponents of Abstract Expressionism, or the New York School. He was first and foremost a painter, but this book also includes his works as draughtsman, printmaker and sculptor. Throughout his career his painting fluctuated between figurative and abstract styles, working particularly on themes of women and landscape. Specifications:

Judith Zilczer, Curator Emerita of the Hirshhorn Museum and Sculpture Garden, Smithsonian Institution, organized more than two dozen exhibitions in her twenty-nine years at the museum, where she served as Historian, Curator of Paintings, and Acting Chief Curator. Her exhibition publications include Willem de Kooning from the Hirshhorn Museum Collection (1993). She has written and lectured widely on modern and contemporary art, and is recognized as a leading authority on the art of Willem de Kooning.