"It was a marvelous idea, but it was also a terrible mistake" artist says about the work that came to define his career

We often hear long forgotten pop stars interviewed on the radio or TV about how one song changed their lives forever but it’s unusual to hear an artist talking in such terms. But NPR has an interesting interview with the artist Robert Indiana in which he talks about the impact – both positive and negative – that MoMA’s purchase of his work LOVE in 1968 had on his career.

When MOMA director Alfred Barr acquired the familiar image - four red-block letters, two over two, the O tilted, the background in squares of deep blue and green - the then 40-year-old painter became a huge art-world star. The work came to define him.

"It took off after that," Indiana tells NPR. "LOVE bit me. It was a marvelous idea, but it was also a terrible mistake. It became too popular; it became too popular. And there are people who don't like popularity. It's much better to be exclusive and remote. That's why I'm on an island off the coast of Maine, you see."

Interestingly the idea for the piece came from his upbringing as a Christian Scientist when the phrase ‘God is Love’ was prevalent. Indian flipped the phrase to suggest that ‘Love is God’. 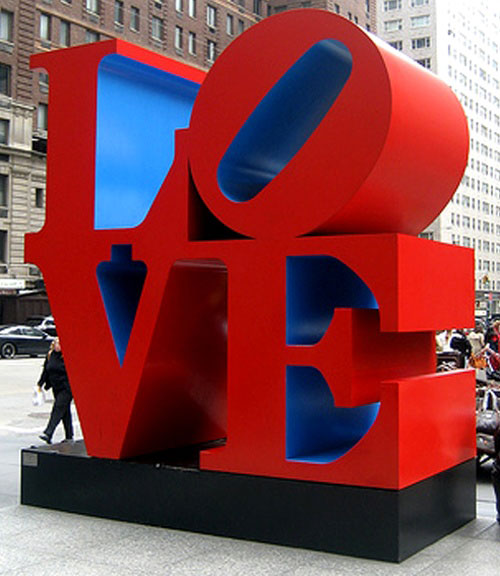 The colours were also a nod to a childhood inspiration according to Martin Krause, curator at the Indianapolis Museum of Art. “The red and the green came from the Philips 66 gas sign,” he says. “Indiana's father worked for Philips 66 and he remembered that combination, it fixed itself into his mind. When he began making the LOVE paintings in 1965 his father died. So the red and green of the (MoMA) LOVE painting, silhouetted against the blue Indiana sky, is in memoriam of his father.”

Though Indiana is usually bracketed with the pop artists (Indeed, he features prominently in our book, Pop) with whom he was friendly, he describes his stenciled letters and numbers as more “hard edge” than Pop. The words “Eat”, “Hug” and, more poignantly, “Die” which appeared frequently in the recent Robert Indiana: Beyond Love retrospective at The Whitney Museum of Art in New York hint at a consolidation, of sorts, of his life. “Hug” was my mother’s word for affection,” he says. “’Eat’ was the last word she said before she died. Everything relates to my own life.” You can read more here and check out our Pop art books in the store here.

Pop Art was one of the most revolutionary art movements of the twentieth century. During the years of the Macmillan and Eisenhower administrations, a period of peace and prosperity – and complacency – the first Pop artists attempted to deflate the established order. Their audacity at first scandalized the Establisment, but by the mid-1960s their work dominated the world art scene.

In the 1950s, a group of artists in Great Britain and the USA, rather than despising popular culture, gladly embraced both its imagery and its methods. Photographs, advertisements, posters, cartoons and everyday objects formed the basis of their art. Roy Lichtenstein (1923-) painted scenes lifted straight from comic strips. Andy Warhol (1928-87) took photographs from newspapers and silkscreened them onto canvases in shocking, fluorescent colours. James Rosenquist (1933-), a billboard painter by training, borrowed banal images from advertising ant put them together to make absurd juxtapositions. More than any other art movement before or since, Pop Art exerted a strong influence on popular culture; its bold graphic style and insolence was widely imitated by the very media that had inspired it. Specifications:

Jamie James is the New York arts correspondent for the Times and an art critic for the New Yorker magazine. He also contributes to Vanity Fair and Art News.