The tiny Massachusetts cottage, created with Bauhaus boss Walter Gropius, is one of his masterworks

You can’t trust everything sales people tell you. But when listing agent Veronika Breer of the US real estate firm Gibson Sotheby’s describes the experience of inhabiting one of her properties as “like living in a piece of architectural art,” she isn’t indulging in undue hyperbole.

The house in question is a three-bedroom cottage in Wayland, a town on the outskirts of Boston, Massachusetts, and it's currently on the market for $2,300,000. What justifies that price tag and Breer’s praise? The building’s creators. The Chamberlain Cottage was designed by Marcel Breuer in conjunction with his Bauhaus professor Walter Gropius and it's a 20th century architectural gem.

“This small cottage is one of Breuer’s masterworks,” writes Robert McCarter in our new Breuer book, “a remarkably minimal design that achieves surprising richness of experience for its inhabitants while also providing Breuer with his first opportunity to fundamentally transform traditional platform wood frame structure.” 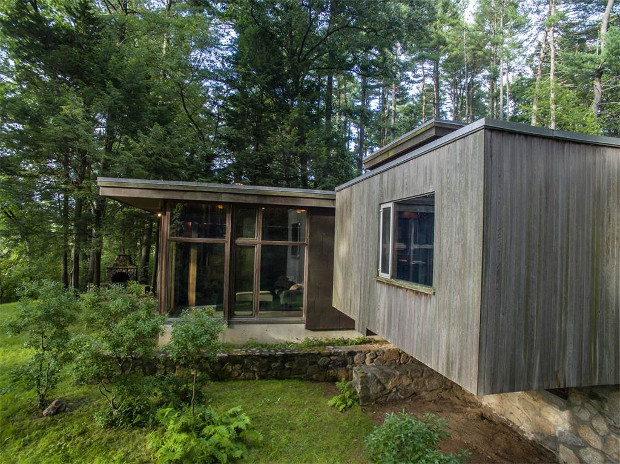 Breuer began designing the house in 1940, when the Hungarian-born designer and architect was working at Harvard. He worked on the project with his mentor, the Bauhaus founder and fellow Harvard faculty member Walter Gropius, completing the beautifully conceived, modernist, cottage in March 1941.

“The deceptively simple volume of the cottage is built without the usual beams at the cantilever or lintels over the exterior wall openings,” writes McCarter. “The main interior volume is framed in wood, and the exterior walls are clad with vertical Douglas Fir tongue-and-groove boards (Douglas was a Scottish botanist who first reported the extraordinary nature and potential of the species) the sheathing beneath is a layer of diagonal tongue-and-groove wood boards, and the interior walls are clad in horizontal Douglas Fir tongue-and-groove boards - the three layers together creating a “home-made plywood” as Breuer called it.”

Not only is the Chamberlain Cottage a fine example of Modernist architecture, and the last single-family home Gropius and Breuer would realise together, the small building also illustrates an important shift in Breuer’s work. McCarter quotes the MoMA curator Barry Bergdoll, who argues that the cottage represents “Breuer’s great breakthrough to a style at once independent of Gropius and of any literal relationship to his newly adopted New England.”

However, all this notoriety didn’t prevent the cottage from falling into disrepair. Local architects Sidney R. Bowen and Angela E. Watson bought the then-derelict house in 1995. “There was never any question in our minds that we had to save it,’’ Bowen told the Boston Globe. The couple restored the original building and added some sympathetic updates, such as a 21st century kitchen to the building - surely a prerequesite for anyone "living in a piece of architectural art.”

For more on the house go here; for greater insight into Breuer’s life and work on both sides of the Atlantic order a copy of our new book here; and for more Modernist American gems order Mid-Century Modern Architecture Travel Guide: West Coast USA.